People use healthcare apps only rarely

Tech is just the medium to deliver solutions 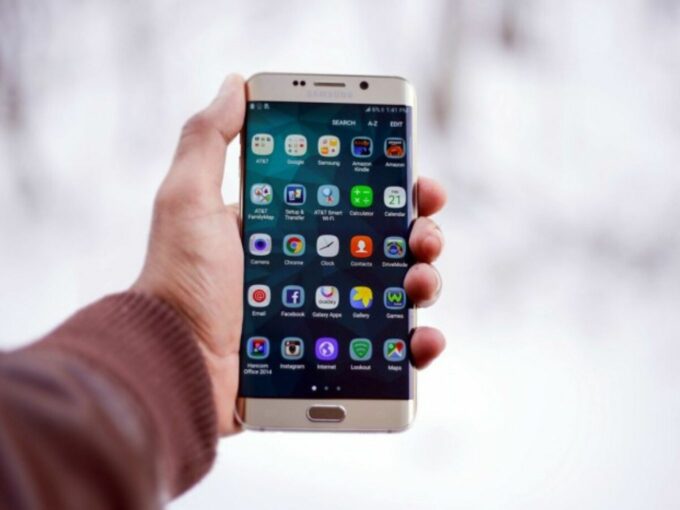 Design as trade has various counterparties and reviewers. Often designers make things to impress each other while all along finding themselves looking to fill the gaping hole left behind by the lack of impactful work. Designers often find themselves pining for work that has a tangible impact on the lives of users.

A user coming up to a product designer and telling her how their work simplified their lives is a much more revered accomplishment and compliment than a hundred re-tweets from Design Twitter.

One such impactful domain is Healthcare, an industry that gives designers the power to help millions of people live healthier and happier lives. That said, with power comes responsibility, and designing for Healthcare comes with a grave responsibility, because errors, either by omission or otherwise, can have a significant impact on the lives of such users.

As designers, we tend to get accustomed to creating products that drive engagement. When designing for utilitarian healthcare, often the aim is to design towards minimizing the time users spend in the product. Even for the user, the app isn’t used every day.

Here are some insights one can take into consideration while designing healthcare apps.

People use healthcare apps only rarely, and might not necessarily refer back to the app as often as other consumer apps – such apps have to be more intuitive than structurally innovative. 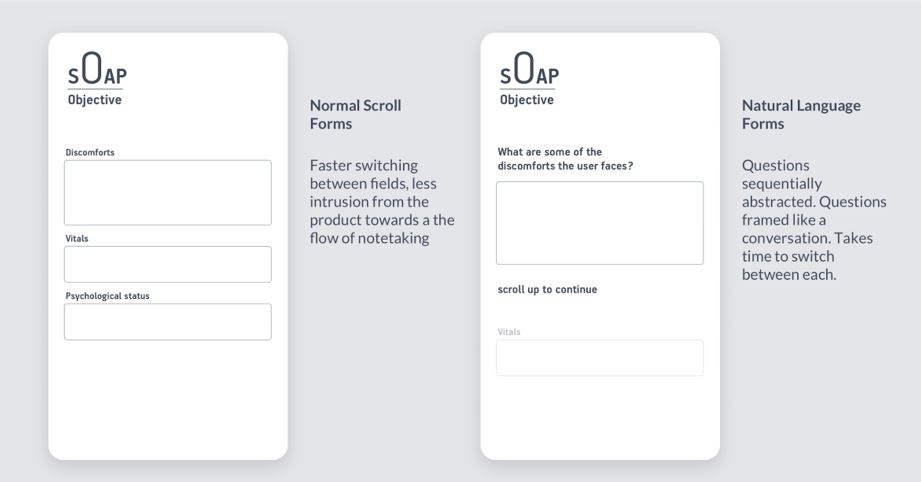 Shown Above: A wireframe of a prescription app that can allow for either a standard form flow or a non-standard, fancier Natural Language form. The latter becomes a usability menace when the form is used repetitively and without patterns.

Healthcare apps need to be designed fundamentally simple because the diversity in users shall be wide. People of diverse socio-economic backgrounds find use cases with the same health app. They may or may not be modern in terms of product usage, but on an average should be assumed to be below average.

This is imperative because the defining behaviour patterns arise from the bottleneck user pool. The app will need to solve for the least modern user and the savviest ones at the same time. It is generally considered a good habit to stick to some established user paradigms that are adopted already across well-scaled products in the market.

While sticking to the narrative is important, there are certain aspects of healthcare products that might require repetitive manifestations. As designers, we swear by reducing redundancy – favouring distillation over repetition. In healthcare however it is often better to allow the user to take the same action at multiple points in the app – both to build habit as well as for them to understand when they should be looking for help.

Anytime an app presents an option to talk to another person, may that be a Doctor, Physician or another healthcare professional, it is better to provide that option at multiple touchpoints to ensure the user never feels abandoned or alienated.

It’s About What’s At Stake, Not The Tech

While tech is disrupting healthcare every month with a new app or a breakthrough, users often are found sticking older paradigms for the sake of security brought about by familiarity. It’s important to understand fundamentally that while innovation is key to product builds, it doesn’t matter to users until a problem is solved in their lives without an extra effort.

While fall detection was a feature on the Apple Watch for the longest time, users started realizing its importance and its impact only after real accounts from users who found themselves in a hospital with a vague memory of having suffered an attack while in a desolate area. 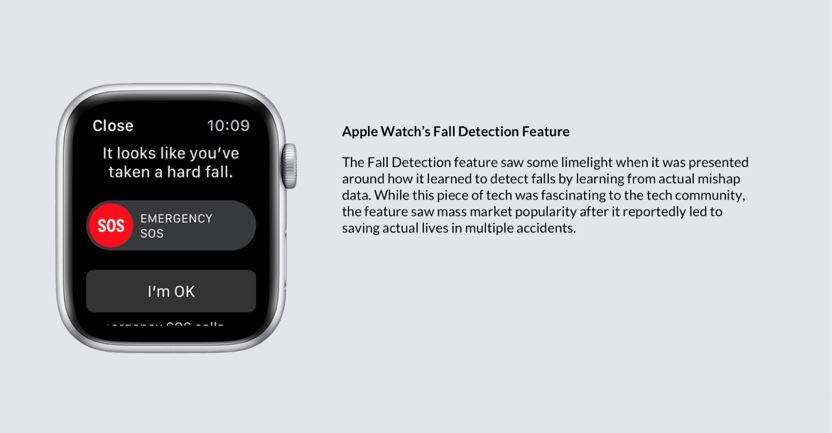 Tech is just the medium to deliver solutions. It’s important to not just understand this but also believe this fundamentally while designing solutions. Users don’t care about a shiny new feature especially when it comes to aspects like Health, Finances etc. They care about its impact and how well it has been already received.

Functionality Above All Else

It is tempting to want to explore novel interactions and interesting new design patterns, both for the sake of differentiation as well as to satisfy our internal need to play. When it comes to products in the medical or healthcare space, however, hard as it may be, that urge must be controlled. It is critical to focus on functionality and usability over novelty & frivolity when it comes to such products. From ensuring the relevant information is presented in the correct format, to ensuring said information is discoverable and actionable are of key concern when designing an app in the medical space.

Healthcare much like Fintech is one of the most government-regulated and scrutinized sectors that businesses deal in. In Healthcare when products are designed, aside from the designer and the user a third equally important consideration is regulation, and rightfully so.

While having access to a patient’s data handy while administering care might as well be a matter of very high urgency, such data will need to be heavily safeguarded given it’s peculiar importance to a patient’s lifestyle and vital needs.

Design and development together deliver the hard task of threading together these two highly nuanced facets of Healthcare products. Ready access to data and compliance with the justified, heavy regulations in Healthcare. From designing for offline access to safe and transparent backups to understanding user permissions and express consents, when it comes to healthcare, the sanctity of safety and data security isn’t open for debate.

Once the basics are covered, the last leg for any well-designed application is delivering delight. While a hard concept to objectify, delight is typically associated with the little things that multiply the experience of the product. Positive re-affirmations after a form is submitted, nudging users effectively without bothering them make tedious data entries, reminding them at the right time about their appointments, making sure they know the real implications of the data that they are saving with the applications are all examples of subtle ways of reassuring users with a top of the line experience. 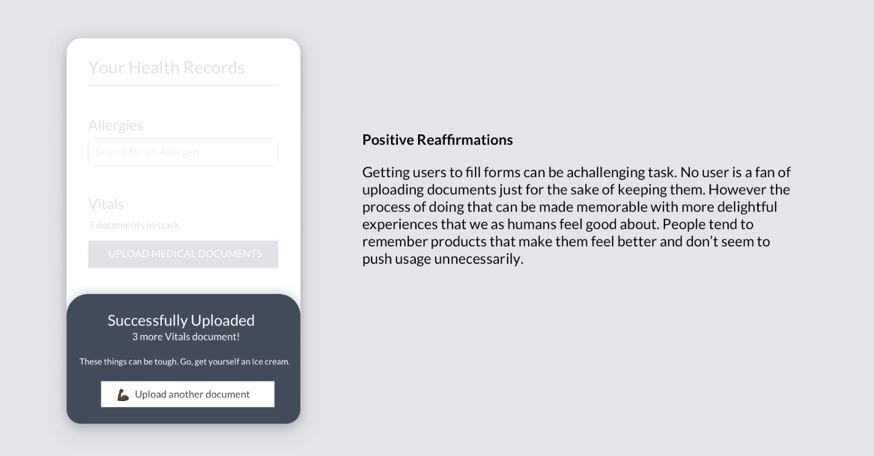 Shown Above: An example of a form displaying positive reaffirmations while the user interacts with it.

Much like other sectors, Healthcare provides designers with an opportunity to enrich the lives of people first hand, helping them live well informed, happier and safe lives. Living up to responsibilities is a challenge a good designer takes with her stride.

There are quite a few good examples of established design principles and guidelines that allow us to move through decisions quicker than making them from scratch. And much like other sectors a lot of such learnings in delivering trust, delight and a robust solution are transferable. For a good designer, every instance a person uses a product is an opportunity to deliver delight and make their lives a little better.