Dark Underbelly Of App Marketing You Should Be Aware Of

Dark Underbelly Of App Marketing You Should Be Aware Of 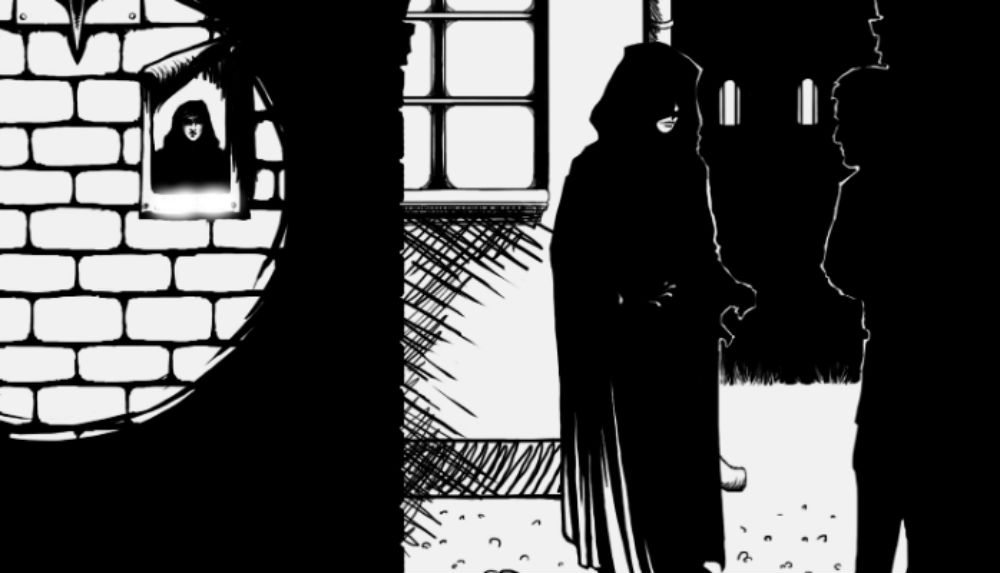 During the last week, I was reading an extremely credible article called about app uninstall rates. As per it, a regular app has an uninstall rate  as high as 77% by day 3 of app install. Have written earlier about how brands have a tiny window to escape the  app uninstall axe. Despite knowing that their apps will finally get uninstalled marketers go behind the vanity metric of app installs on both Google Play and Apple App Store.

With many startups raising tons of money the quest for traction once the investment is made is ever increasing. This pressure on traction by investors is leading to many startups pushing vanity metrics like number of app installs, number of engaged users etc. Due to this lot of effort is made to push these vanity metrics by pushing the app using ad networks. But some  of these networks resort of bot based fake downloads, which don’t lead to users showing up as DAUs(Daily Active Users). In response, marketers started to push for engagement based app install campaigns where the user has to download the app and perform certain actions like make a query or keep the app installed for 1 week.

Platforms to arbitrage on demand

Given the demand for instant traction and marketing demand of getting engaged users,  many platforms have sprung up to cater to this need. These platforms marry needs of students in India to get data/voice recharges with the marketing demands. They offer students tasks like downloading an app, using an app for a week etc and in return give them Airtime/Data Packs on their mobile.  These platforms have been used by large Ad networks to get engaged app installs to spruce up metrics !. There are many such platforms the biggest being the mCent from China which has 10 million apps downloads on Android App store and is very popular among students in India. In addition, there are others like Ladoo Apps, TaskBucks App and several other small ones which are springing up to make hay while the sun shines !.

mCent which is from a company called  Jana(based in Boston) is the biggest network of such app globally and is a big player in India too. It offers daily tasks to be done by the users  in return for these tasks it is willing to pay  some money. The task can be as simple as just install the app , mCent app will be able to read the Andriod settings to know that these  apps have been installed , after which you get Rs X worth of recharge in your account next day. The amount of money which a user can earn varies from day to day depending on marketing campaigns which are live. mCent claims to have marketed over 4000+ unique apps till date.

Ladoo is an India specific service which allows users to make install recharge money for app installs . In a sense it a copy of the mCent  but it too has around 5 million installs in India ! 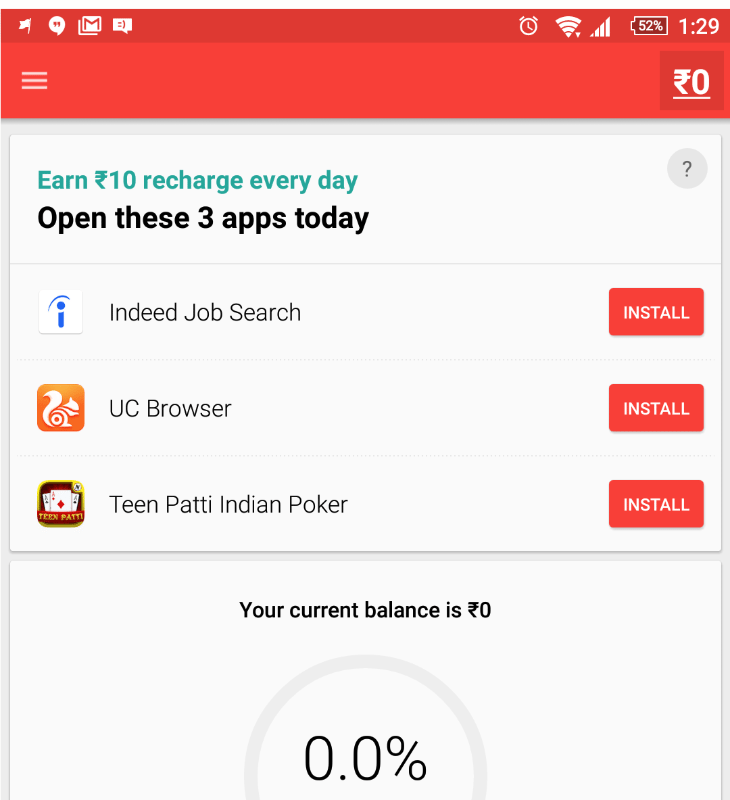 TaskBucks is an India specific player which has 5 million downloads and is the most aggressive lot of the players in India. They are offering many tasks including a) App Install b) Usage of App(e.g open app and pay around for 10 mins) c) Fill Up forms !!. (Dummy Lead Gen). 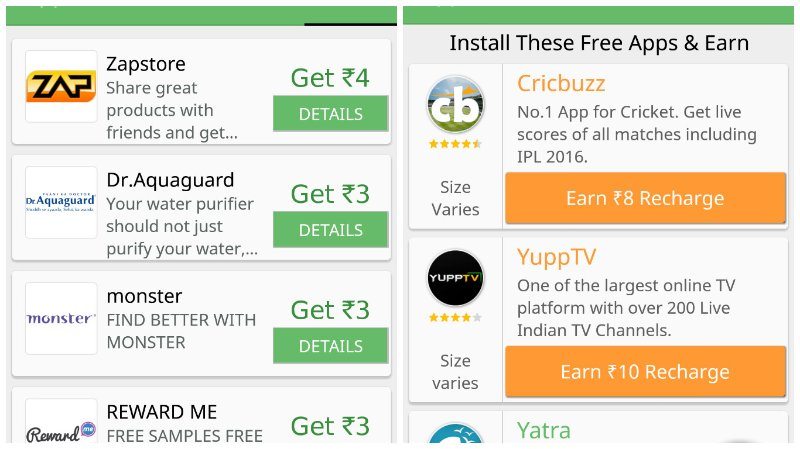 The app install is one of their main offerings but they also seem to be generating leads for companies like AquaGuard ,Monster etc. On clicking on the Aquaguard link, I was taken to a page where I need to fill up my details so that AquaGuard can come to be home to do a demo for the product !. Obviously,the student is not interested in this product and is here only to make that Rs 3 extra talk time on his phone. These leads are junk leads for Aquaguard  but would enable the ad network to charge Aquaguard for each lead. And in turn, some of this money is shared between TaskBucks and the student !.  So they are not only screwing up the app install metrics but are screwing up the lead generation  process at Aquaguard in return for making some quick bucks . Not sure if the Aquaguard marketing team knows about this fraud !

My advice is to look beyond these vanity metrics as these don’t make sense to the business. Instead, focus efforts to ensure that the user is engaged with the brand in the initial interactions before 3 days so that they don’t uninstall the app. Also to increase app installs, marketers should not look at blind networks (who in turn use such mCent,TaskBucks etc) but should instead look to run the ads using Google and Facebook with proper targeting. By blind networks mean networks that can’t provide you source of the app installs. From my personal experience, I have seen quotes ranging from Rs 18 to Rs 45 from such blind networks  and this waste of money as these installs are never done by your target audience and any engagement which you manage to generate would have no business impacts. If you are using networks then be sure to know where your app will be marketed and to make sure that you are targeting the right audience for the app.

Would love to hear your comments and experiences about app marketing.