Building PocketScience: The Journey So Far [Part I]

Building PocketScience: The Journey So Far [Part I] 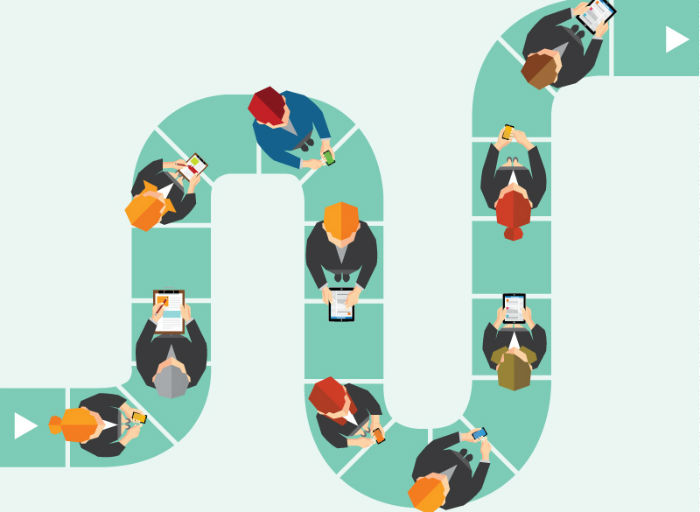 PocketScience is an Android app, currently for class 10 students for practicing science concepts. Students can revise their science chapters with games like Anagram, Crossword and Compete. Content of games is aligned with CBSE recommended NCERT textbooks.

Vineesh started working on gamifying science chapters in May 2013 and released first version of PocketScience mobile app in November. I joined with him as co-founder in August 2014, primarily for handling marketing activities. At that time, PocketScience was shining on play store with 4+ rating, 5000+ downloads and mostly positive reviews by users. Its been loved by students.

Why we are doing Startup

We are working together to evoke curiosity and inspire students for learning and exploring world. We are science lovers and we know how curious we were in our teen age. We are still curious and exploring the meaning of our lives through this startup. Our efforts are to create a product which can become medium for students to experience science, think deeply rather than remembering answers, having fun while learning, sharing their thoughts and discussing questions.

We don’t expect everyone to be scientist but living scientifically

When a student asks his teacher a question like “How life started on earth?”, teacher don’t know precise answer. Teacher gives either an incomplete answer confidently or says “this is not in syllabus, why to waste time”. Similar happens when this curious kid bothers everyone around with out of syllabus questions — parents, siblings, elders, teachers, no one encourages to explore answer and to ask more questions. Slooowlyyy this young mind stops asking questions and starts focusing only on syllabus which is supposed to make him a great person.

We will consider ourselves successful if we can help a fraction of these curious minds. We may not able to provide right answers to their questions, in fact we don’t want to answer any question. Our purpose is to encourage their habit of asking questions, support them in exploring answers, pat on their back for their efforts and preserve innovative minds.

Since the launch of PocketScience, we have seen many ups and downs. Our moods swinged with fluctuations in app install rate and play store ratings. We fixed bugs, rolled out new features, released new content in games, improved UI/UX and interacted with lot of students and industry experts.

Our startup was remained in experiment mode. We are still doing new experiments to validate our hypothesis and assumptions. Our purpose is to provide value to students while walking on our mission path, that is, evoking curiosity in young minds.

During our journey, we had great learnings from little successes and failures.

Our first experiment was to ask question in form of interesting game rather than asking traditional multiple choice questions. Problem with MCQ is that student will either guess or already knew answer, little opportunity left to think beyond given options. 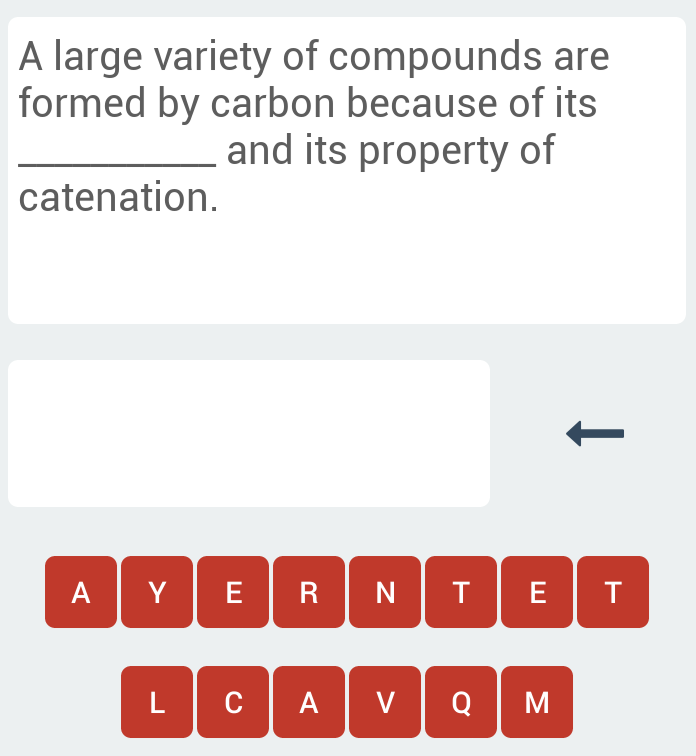 Snapshot of Anagram from PocketScience app

We picked up conceptual sentence from NCERT book and scrabbled missing word to make Anagram. Some students found this game to be addictive if they already understood concepts. For others it was opportunity to go back to book and explore answers. Till today we have 1500+ questions which have been attempted over million times by student and they spent 500 hours in decoding anagrams. 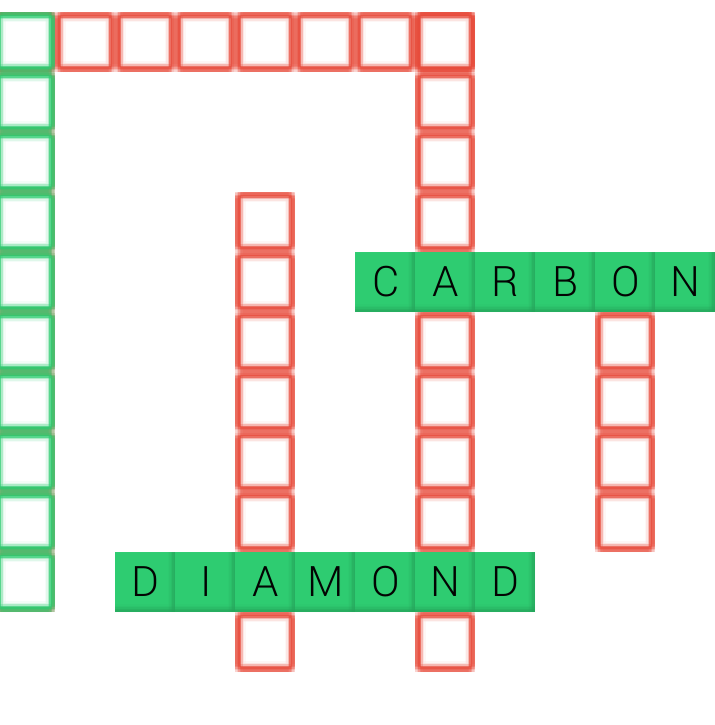 Snapshot of Crossword game from PocketScience

Along with Anagrams, we introduced Crossword game in form of science puzzles. We tried to keep each question thoughtful so that student can think deeply about answer. We provide hints and pointers to reach to answer. Crosswords have 200+ concepts which have been explored over 10,000 times clocking 250+ hours in total.

We also released game called “Compete”. This allowed users to compete against time, against themselves and against their fellow learners. The questions were borrowed from Anagrams and Crosswords to ensure time-bound mastery and recall of the chapter. At the end of each session, the student’s score was placed on a Global Leaderboard which was an added incentive. So far we have had 2000 Compete scores submitted to our leaderboard with 300 hours of engagement.

Last year whenever we sent out Push notifications in PocketScience, we only observed an increase in uninstall rate.

This year we commenced testing push notifications with a new app. As an experiment, we launched an app focused on preparation for National Talent Search Exam. (NTSE is an annual scholarship exam for CBSE Class-10 students)

The app was aimed at helping students clarify their doubts and accelerate their preparation. We instituted a “Question of the day” coupled with daily Push notifications and saw an daily open rate of 15% and a day-on-day 20% engagement. This resulted in many students falling in the love with the app itself.

More recently, we have been trying experiments with Push notifications in Pocket Science as both a means of engagement as well as creating user habits.

Participation in discussions within app

We introduced discussion forums within Pocket Science in June 2014 as an opportunity to share learnings as well as address student doubts. But the participation wasn’t up to our expectations.

However, as we progressed, these discussions seemed a much more integral step towards sparking curiosity.

The NTSE app which we released (and mentioned earlier) was primarily a discussions app and lead to interesting conversations, student led questions and engagement that we hadn’t imagined before.

We then improved discussion forums in Pocket Science and are steadily being able to spark curiosity of students and engage them in thought-provoking and mind-stimulating conversations.

In the last 15 days, almost 50 users participated in discussions, leaving 300 comments in the Pocket Science forums and the numbers are steadily growing!

Our expectation from facebook page was to aggressively increase in app downloads. We started building fan base in mid October.

We reached from 500 likes to 5000 likes in one month without spending single penny.

We experimented with different type of questions, images and links — we figured out which type of posts attract more likes, shares and comments.

We pushed our facebook audience to download app and observed spikes in install rate. But later we realized that social media is long term asset and our focus should be on building valuable and relevant audience which can later be used for app promotion. If users fall in love with brand then they tend to promote without any external efforts. 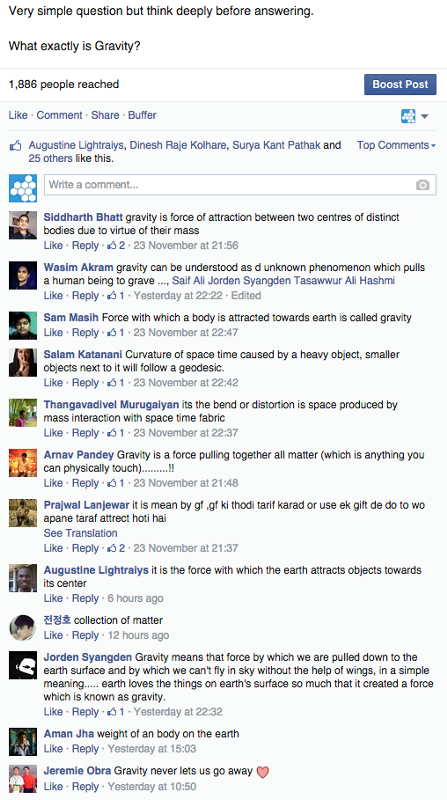 Next challenge was to engage users in interesting conversations. Initially we had to engage people on multiple choice questions because very few were commenting on thoughtful questions. Steadily we figured out how to get best of facebook community.

Now people come up with interesting thoughts, even on very simple & basic question like Gravity. It is amazing to see diversity of thought process and willingness of giving detailed answers.

As per facebook stats, 28% engagement is happening from age group 13–17 and which was just 20% one month back. With 6000 likes, our post reached 2000 people with 30+ comments. People not only answering questions, they are asking very interesting questions on facebook page.

We are confident of building stable product based on our learnings so far. Next release of our product will be focused on science learners of all classes(Globally) with more fun, improved UI/UX and rich in discussions.