Aspire To Be An Android Developer? Here Are 5 Traits Required To Be One

Aspire To Be An Android Developer? Here Are 5 Traits Required To Be One 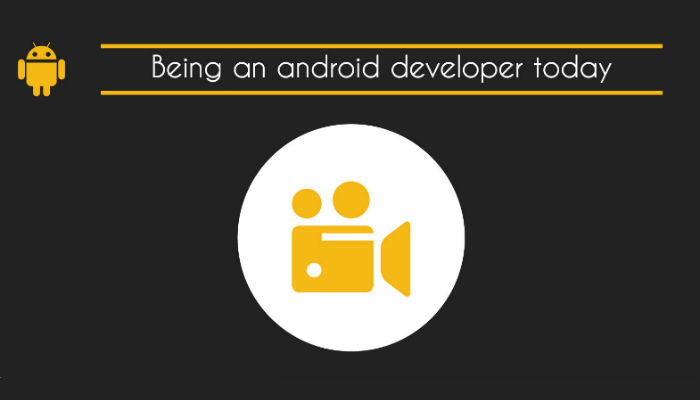 Today 1000 – 3000 mAh batteries support not only a WiFi chipset, but also an accelerometer, a GSM radio, barometers, heart rate monitors and plethora of other sensors. Today, phones are coming out with as much power, storage and RAM as computers. A world of opportunities has opened up for smartphone users, and far more so, for smartphone application developers.

All this wouldn’t have been possible without Android. Until Android first came to the mobile OS foray, smartphones were meant for the elite. Android brought it to the masses. While its business implications are one side of the story, what it did for software development was one of the great turning points of computing.

We, at HackerEarth, recently did a Google Hangout, gathering some of the best Android development talent in India to understand what it takes to be an Android developer today. The panel consisted of Sriram V Iyer from Altiostar, Pranay Airan from Intuit, Aman Alam from Happily Coded, Ravi Vyas from Moengage, Soham Mondal from Skyro, Abhimanyu Dikshit from BetaGlide and Kiran Bindhu Hemraj from Dexetra.

Here are the 5 key takeaways from the Google Hangout –

1) Any platform developer should have a portfolio

When asked what will get an Android developer hired, the most common thing that most of the panelists agreed upon was the requirement of a portfolio. Ravi Vyas from Moengage said, “They don’t teach you this in engineering. Consequently, very few developers do this. But if a person has an application on Google Play, and it has over 100,000 downloads, I wouldn’t have to check his resume to make sure that he’s a good Android developer.”

Kiran from Dexetra, which was recently acquired by Quixey, echoed a similar hiring practice.

“A good analogy for this is – if you’ve got muscles, you probably do a lot of exercise,” concluded Ravi.

Good mobile developers are cognizant of battery usage in applications. Kiran from Dexetra shared some techniques that they use in their app Friday – “We use Sync Adaptors, which syncs information efficiently. We use activity state adaptor, which performs activities based on the activity the user is doing. For example, it will not unnecessarily poll data when a person is moving, to conserve data usage and battery. We also send bulk requests.”

Sriram believes that in the coming years, mobile development will see more developments in battery aware algorithms. He said, “In my previous company, we were working on similar things. The algorithm checked the size of the packet, and the stream quality. It then chose the most appropriate stream to receive, 3G, 4G or WiFi, with conserving battery as the sole constraint.”

3) Android is no longer only about phones

Android is one of the first OSs that made the foray into other electronic appliances. Today, there are fridges and washing machines that use Android. Aman Alam from Happily Coded said, “I think Android developer must approach app building as a problem solved and more as a mobile developer. They’ve got to be context aware.” He does believe that in the future,

Android developers having experience of building applications on other devices might become a prerequisite. “It will be like the transition from web to mobile,” he said.

Sriram further added that he’s a fan of Android on cars. He said, “Not to drive the car itself, but for in car entertainment, I see android playing a major role there. Programming cars is going to change a lot of things for Android, on a programming level, and on design level.”

4) Building android apps means being more than an android developer

Pranay Airan is an individual android developer. His apps have hundreds and thousands of downloads on the play store and he says, “Building an android app means working on backend, API, Design, content, marketing, distribution and many other things. My brother helps me with designs. I draw a basic wire frame and give it to him and he gives me the design. If the app requires custom APIs, I build them out first. It is important to do that, because then you can focus solely on building the app. Then, I build out a basic skeleton of the app and then modify it page by page to mirror the original design. After this, there’s marketing.”

He says that it takes him about 2 months to build an android app. This is considering that he has a full time day job and dedicates about 2 hours every day. When asked why he does it, his answer was simple – “Because it’s a lot of fun.”

5) Developers suck at design… or do they?

Aman said, “While developers shouldn’t design, they’ve definitely got to set the boundaries and layouts for the designers to work in. Because at the end of the day, implementing those designs is still the developers job.”

Abhimanyu Dikshit, who is a co-founder at BetaGlide, said, “UI and UX matters a lot. We’ve seen subtle changes resulting in gain and loss of users and engagement.”

Soham Mondal, the creator of Skyro, has a slightly different view. He says, “While I agree that design is tough for developers, it’s not something that developers can’t learn. Just follow the design guidelines and that should take care of most things. Remember it’s not all about how it looks, it’s how it works.”

Here is the complete Hangout here –

[This article is contributed by Raghu Mohan, Product Manager at HackerEarth]