Aadhaar – Tokenization Puts To Bed Any Concern Of Centrally-Linkable Repository!

Aadhaar – Tokenization Puts To Bed Any Concern Of Centrally-Linkable Repository! 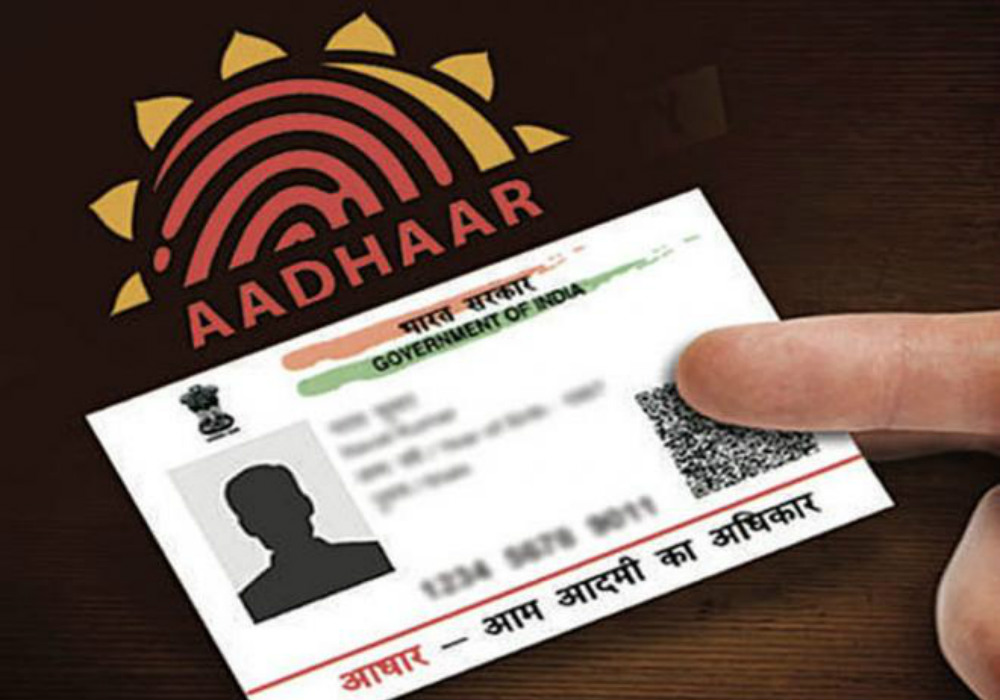 The list goes on and on! Many have asked why this is required?

Others have been concerned about privacy – stating that two of the above agencies can partner, do a v-lookup on the basis of Aadhaar Number and subsequently spam us with cross-promotion offers. This has been also misunderstood and fears of the proverbial Orwellian state loom.

Some have been fearing and there is some centralized system that captures all this information and everything you do is being “tracked”.

Of course, the intent and reality are far from the above perception.

To be clear, there has never been a single central repository where all my Aadhaar transactions are tracked and mapped to usage. So while UIDAI might know that I did an eKYC at ICICI bank and with Airtel and also did an authentication at my office, they have no knowledge of my transactions with either party.

Now that we have gotten that concern out of the way, the other question that comes up is this “Can someone hack into and link all databases”?

Before I get into the details, here is an understanding of the UIDAI’s Aadhaar Enrollment and Authentication hierarchy.

During enrollment, UIDAI collected data the following data – Name, Address, DOB, Gender, Phone Number, Email Address and Photograph, 10 Fingerprints and 2 IRIS scans. Based on this data and the uniqueness of the Fingerprints and IRIS scans, a unique 12-digit, permanent Aadhaar number is generated and issued to the consumer in the form of a letter.

Now let’s get to Authentication. The UIDAI has created a hierarchy of service providers who may authenticate users against the database. 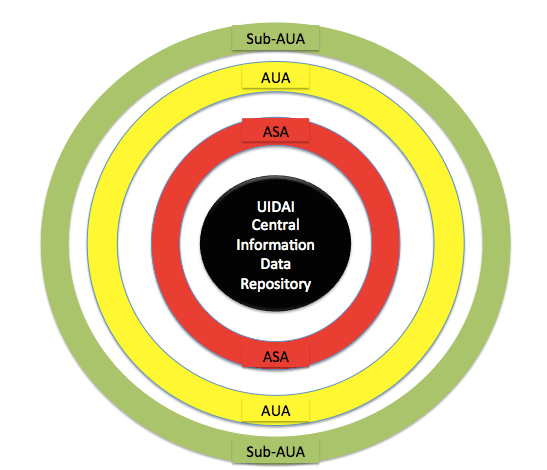 In this model, only a handful of highly vetted Authentication Service Agencies are allowed access to the UIDAI’s Central Information Data Repository – the CIDR – which itself has been designed with very high availability and redundancy. These are often large telecom operators and other government agencies – these are the ONLY entities who are given direct connectivity to the UIDAI’s data-centers.

ASA’s, in turn, are gateways to Authentication User Agencies who are the primary users of the Aadhaar system – these could include all banks, all telcos, all insurance companies, NSDL, etc. Lastly, Sub-AUA’s are smaller entities that connect to AUA’s.

With these 3 layers of rings around the Aadhaar system, it is secured with an architecture that is generally considered to be best-in-class around the world.

Now let’s get into the data itself. Let us assume that the same 5 people Ramesh, Saina, Ajay, John and Sania open an account with ICICI Bank and Airtel. Let us examine how the bank and telco’s databases will be in the pre-Aadhaar world, the current Aadhaar world and the post Aadhaar Tokenization world.

In the above case, we notice that the 5 users had a bunch of unverified data which may be right, wrong, or spelt incorrectly. Notice Ramesh is spelt Rames and Ramesha in the two cases and the PAN Card information and spelling of Ajay is incorrect. One may argue that linkage could be difficult because of this.

However, there is no way of knowing if any two of these accounts belong to the same person or don’t because the same user could have opened one account with a Drivers License and another with a Voter ID – this would run the risk of a Benami/illegal account.

In the world with Aadhaar, since the Aadhaar number is a common key, the database will look like this:

However, if both databases are merged, it will be easy to pull up the common customers. This still doesn’t mean that the government has access to all the data – it just means that ICICIBank and Airtel could easily find their common customers. While low probability, its a possibility.

Another way of visualizing this is in the image below. 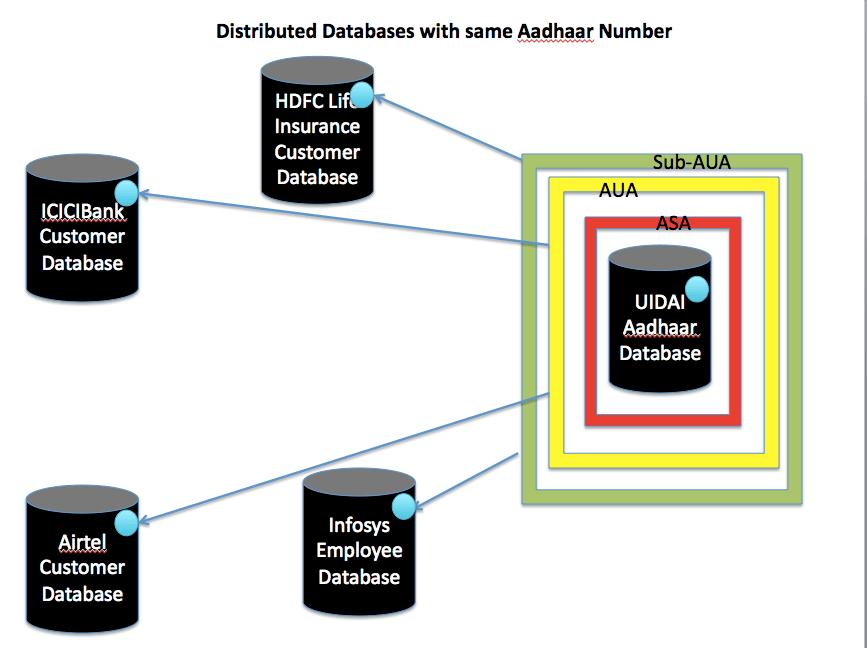 In the case of Tokenization – which is now being mandatorily rolled out over the next few months, the above database will be changed – see example below.

In this above example, the 12-digit Aadhaar Number isn’t found in either database. Additionally, the Aadhaar Token for the same user, say Ramesh, is different in each database. As such identifying the common customers between the two entities is no longer possible exclusively on the basis of Aadhaar Number.

This can also be visualized by the image below – although its still the same customer’s Aadhaar number, the tokens are different in each database. 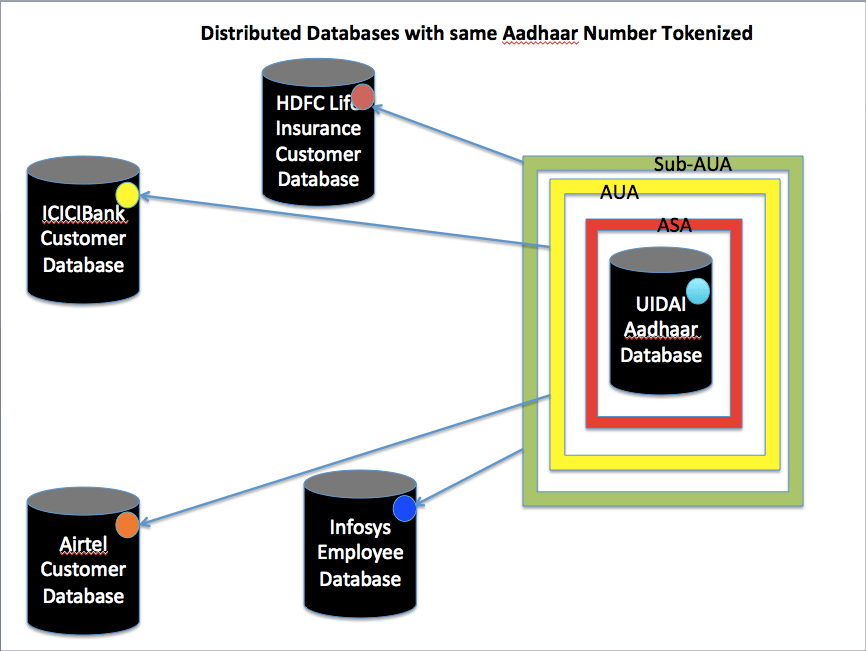 Once this concept is understood there are a few variations to keep in mind – for example, if Ramesh were to close his account with ICICIBank and open a new one two years from now, he should get the same Aadhaar token for ICICI Bank as he previously had. This helps him get the benefit of his history – perhaps get a higher credit line and also prevents him from pretending to be a new customer.

These are the primary benefits of Tokenization of Aadhaar.

Tokenization is a very powerful concept since it ensures complete security and privacy both to the end-user and to the system. This was the one open question that UIDAI has now plugged definitively and I’m glad that it will be seamlessly rolled out shortly!

To summarize – there is NO central database, there is NO linking of databases and in future, it will not be possible to link such databases.

[This post by Sanjay Swamy first appeared on the LinkedIn and has been reproduced with permission.]

Tata Digital Likely To Launch Its Own Marketplace For Cosmetics