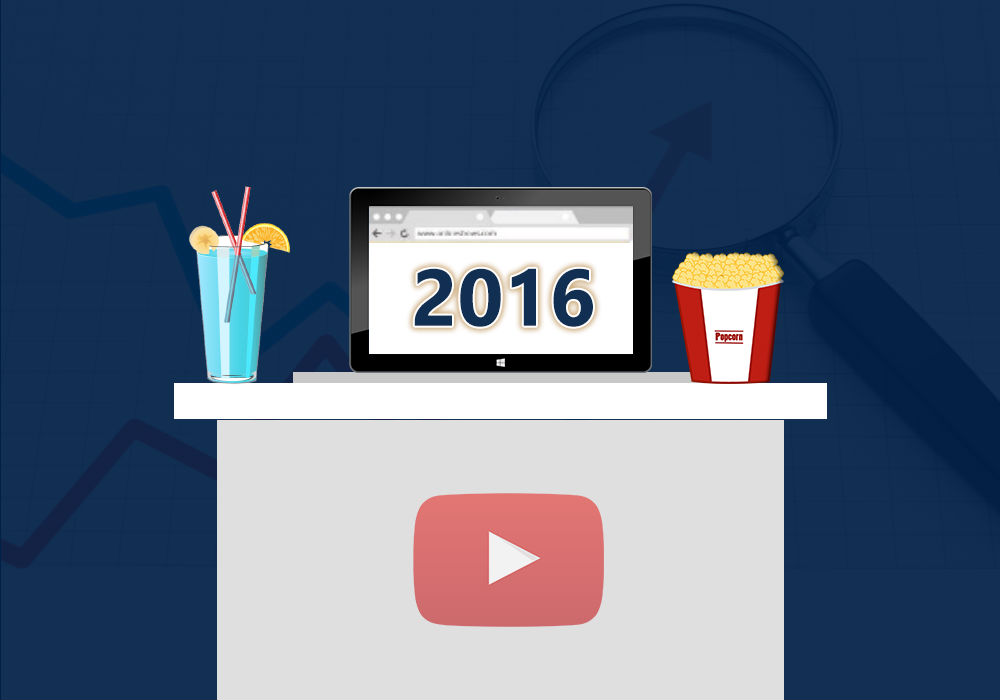 Another eventful year in the world of digital marketing is coming to an end. The biggest talking point of the year of course was Video! 2015 has been the year when almost everyone started realizing the true potential of video. Online conglomerates that had never focused much on video were forced to turn their attention towards it; whereas those who already had video as a part of their overall vision were forced to fine-tune their strategy further.

Facebook started offering monetization to content creators, launched Live streaming for celebrities and supporting 360 videos. YouTube realized the potential of a growing market like India and launched its production facility called YouTube Space in Mumbai. In November, Snapchat revealed that an astonishing 6 Billion videos are being sent using its platform every day! Incredible statistics were being tossed around every day! New product tweaks and announcements to accommodate videos better, had become the norm!

We, at Vidooly have been keeping a close watch on all that’s happening in the world of online video, and to help you get a head start for the coming year; in this blog we list down the top online video trends that you can look forward to in 2016:

According to a recent report by PricewaterhouseCoopers, around 20% of all cable customers in the US are going to join the cord cutting trend in 2016. For the uninitiated, Cord cutting refers to viewers cancelling their subscriptions to Cable TV. The major reason behind this trend is the lack of choice that users face while selecting the bundle of programs/channels of their choice. As the quantity and quality of content available online has steadily increased in short-form video platforms like YouTube and long-form platforms like Netflix, consumers now have more choice than ever before.

The number of regular TV viewers has been in decline in countries like France, Russia and China as well. Walt Disney and ESPN have already witnessed this first-hand: ESPN reportedly lost 7 million customers for its cable channel in the last 2 years!

Online video distribution is probably finally set to overtake traditional TV broadcast in 2016. Chances are, far more people will watch the 2016 Summer Olympics through the web than through the Television!

According to a recent Comcast report, YouTube’s video app has earned the second most unique visitors year over year with only Facebook ranking higher. Also, those who watch YouTube videos on mobile devices spend nearly 9 hours per month on the app; which is almost double that of the figure about a year ago. These are clear indicators that this will only increase in 2016 as well.

During Fortune’s Brainstorm Tech Conference in July, YouTube’s CEO Susan Wojcicki was asked about the top 3 priorities for YouTube. And she famously answered – “Mobile, mobile, mobile.”

So, the writing is on the wall – In the already crowded online video marketing space, only those brands that adapt their strategy to mobile will survive. The Rise Of Video Advertisements

Video ads aren’t new. Platforms like YouTube, Facebook and Twitter already offer video options to advertisers. But 2016 is going to be a whole lot different because Google is finally going to kickstart in-SERP video advertising.

When it comes to technological innovation, Google has always been the trendsetter. The fact that it is trying to incorporate video ads into its search results means that user acceptance of such an advertising medium is starting to increase and in days to come, more video ads might appear in a wider variety of mediums.

YouTube recently released the top 10 video advertisements on its platform in 2015 and not surprisingly, more viewers consumed them on mobile, than on desktop computers for the first time ever. 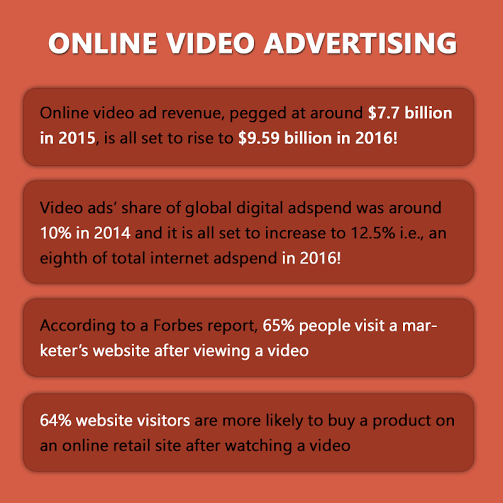 The new online consumer is quite tech savvy and will easily see through the salesy tone of a promotional video. Therefore; to avoid being skipped, video ads will feel more like stories and less like commercials. If brands want people to talk about them or their videos offline or online, they have to make them more engaging and shareable. If you analyze the top video ads on YouTube in 2015, you’ll notice that almost all of them are more like stories and less like advertisements.

Also, purpose-built native video ads which look as if they’re a part of the website or platform they’re embedded/placed in; will grow in popularity. Native video ads are usually longer than 30 seconds and they can be used both to educate and entertain audiences. Unlike traditional online video ads that are generally more product/service-centric (‘Push’ Marketing), native video ads are handpicked by content and creative teams and researchers rather than sales oriented marketers.

Better Get Used To Vertical Video, Because It’s Here To Stay

Just a couple of years back, recording a vertical video was considered a blasphemy. But times have changed now. Now that people can use their iPhones and shoot in high quality (4K in iPhone6S), 2016 will surely see more people shoot videos vertically than ever before.

With so much of online video content being consumed in handheld devices these days, it makes perfect sense that websites and products also optimize the vertical video viewing experience. Snapchat definitely has been one of the driving factors behind the rise in popularity of vertical video but how people will use this screen layout in their productions remains to be seen.

That was just awesome wasn’t it? Unlike a regular video viewing experience where you are a passive observer, an interactive video makes you do something. And “doing” is a more memorable action than just watching.

The best thing about interactive video is that you can measure its performance a lot better than a standard video. Whether it is a simple website click-through or a lead capture form, you can quantify the results much better.

According to estimates, Virtual reality device sales will hit 14 Mn units in 2016. Facebook-owned Oculus, HTC, Samsung and Sony are all vying for their piece of this emerging market.

According to Global research firm TrendForce, VR Games require much lesser resources than VR movies and first person games in particular can be ported to VR devices with relative ease. Lesser time requirement and lower cost will be strong incentives for game developers who are going to be the major content providers for VR hardware. 2016 might probably be the year when VR becomes a reality for the average consumer.

Just like VR, 360 degree videos are also going to gain a lot of momentum in 2016. With both YouTube and Facebook already adding 360 degree video streaming capabilities to their repertoire, we’ll definitely see more and more video creators making these immersive videos for their fans.
However, creating these videos is not a piece of cake. At least not yet. It requires costly equipment and a lot of man hours to make. Therefore, we might see brands helping creators make these videos in return for subtle brand placement.

Live Streaming Will Pick Up Steam

More and more celebrities and brands will start using live streaming video platforms like Meerkat and Periscope for a personalized customer experience. These Social Video apps will look to put the user right where an event is taking place.

Live streaming is a powerful tool for broadcasters as well. Especially in the Sports vertical. You can expect more live events to be streamed online in 2016.

Globally, Video on Demand(VOD) or Over the top (OTT) video services are gaining more traction among viewers. The global market for VOD was US$ 207 Billion in 2014 and it is set to reach US$263 Billion in 2016. And Asia Pacific region is going to surpass Western Europe as the second largest market for VOD after US.

Growing internet penetration in emerging nations like India and China is going to fuel the growth of the VOD market further. In India we’ve already seen the example of HotStar which has seen a phenomenal growth since its launch in January 2015. Video subscription service Vessel, led by former Hulu CEO Jason Kilar and former Hulu CTO Richard Tom is another big success story in the world of OTT video.

With an increase of VOD providers, streaming devices will also increase in number. The North American market is already crowded with Apple TV, Chromecast, Roku, Amazon Fire etc. 2016 might see manufacturers from other geographies also hopping on the bandwagon with their hardware offerings.

New age content conglomerates like Buzzfeed and Vice are grabbing more eyeballs than ever before by focusing more on video. Buzzfeed videos generated around 2.5 billion views just in the month of October! This just reinforces the fact that video is the way to go in the content business. And in 2016, we’ll definitely see more content businesses following suit. Hopefully, we’ll see some magic from Indian content aggregators as well in 2016.