The Reset: Will Print Media Finally Succumb To The Digital Onslaught?

The Reset: Will Print Media Finally Succumb To The Digital Onslaught? 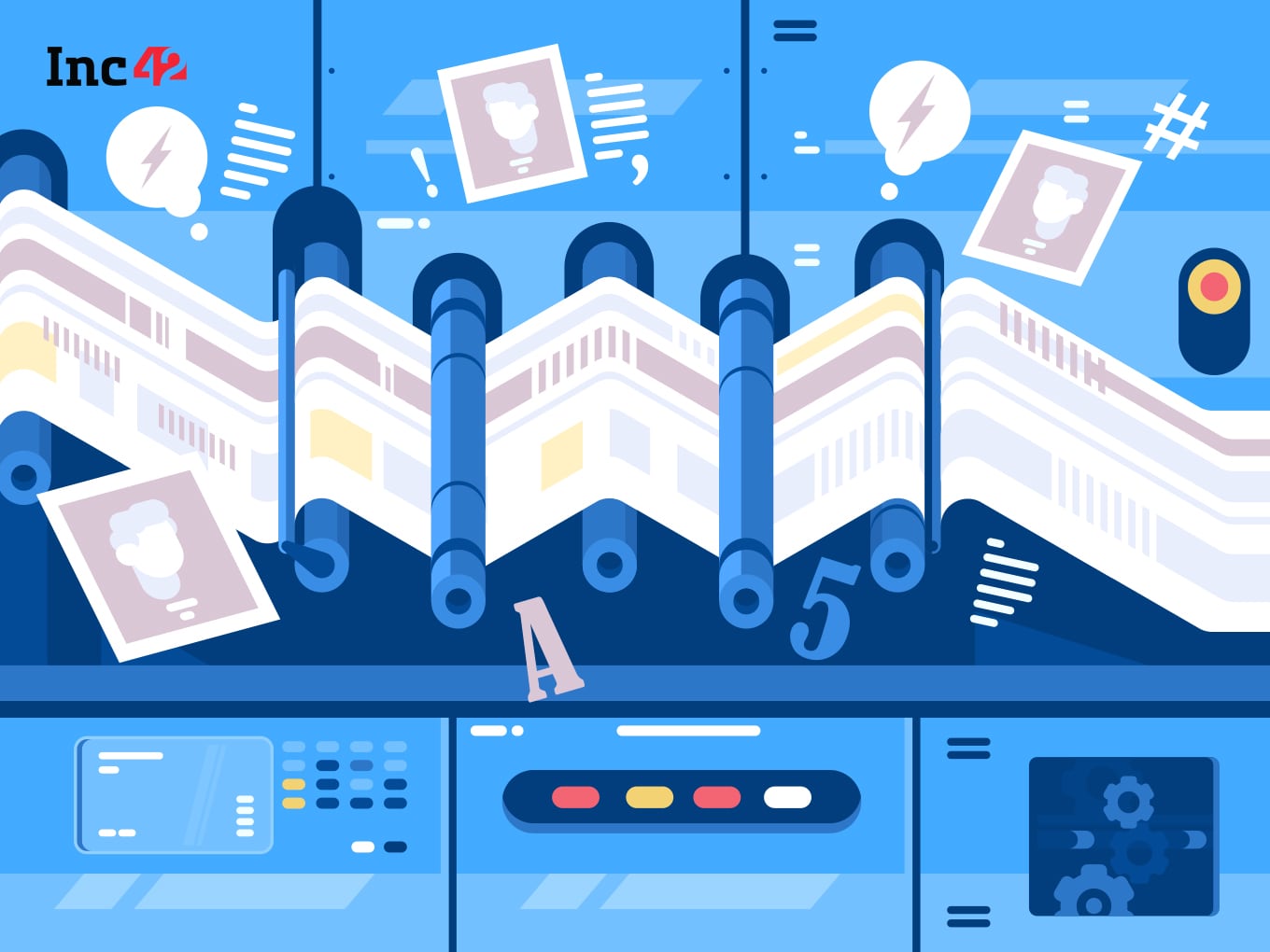 For avid newspaper readers, any glimmer of a hope of a revival has been dashed by the Covid-19 pandemic

The best print media can hope for is to slow the attrition of the user base using seamless digital offerings, says Majumdar

William Shakespeare once wrote, “Time’s glory is to calm contending kings, To stamp the seal of time in aged things.” Perhaps, the time has decided to put its seal on the print media, after over a century of glory.

The proliferation of audio-visual media had already strained the publishing industry and this was only exacerbated by digital media taking centre stage in the 21st century. While traditional print media behemoths were one of the first to move online, the reliance on traditional revenue models meant that despite the advantage of legacy, many of these brands were slow to adopt the cutting-edge tech.

Publishing giants such as the Times Group launched Times Internet and experimented with technologies such as AR-based content, interactive videos and more, but this was never the core focus of the publishing industry. With a drop in newspaper readership and circulation, there came an increase in layoffs for the non-essential staff as well as many of the older roles that involved typesetting and in the press.

While many newspapers launched digital subsidiaries in parallel with the print editions and experimenting with subscription-based content models, the digital media game is still largely driven by free online publications such as News18, NDTV, Firstpost, Moneycontrol, Indian Express, Economic Times. These publications have diversified into podcasts, videos and webinars beyond articles to keep the audience engaged further.

But as it’s said, there is no greater force of change than time. For avid newspaper readers, any glimmer of a hope of a revival has been dashed by the Covid-19 pandemic. With the 21-day lockdown in India putting a halt to the printing presses, people have been forced to pick their smartphones for their daily news, and this could finally bring many newspapers to their knees.

According to Comscore, compared with the week of March 9-15, 2020, visits to websites and mobile apps in the “General News” category went up by 50% during the week of March 16-22, 2020. There has been an increase of over 453% in news app usage in the past month, according to inMobi Insights. 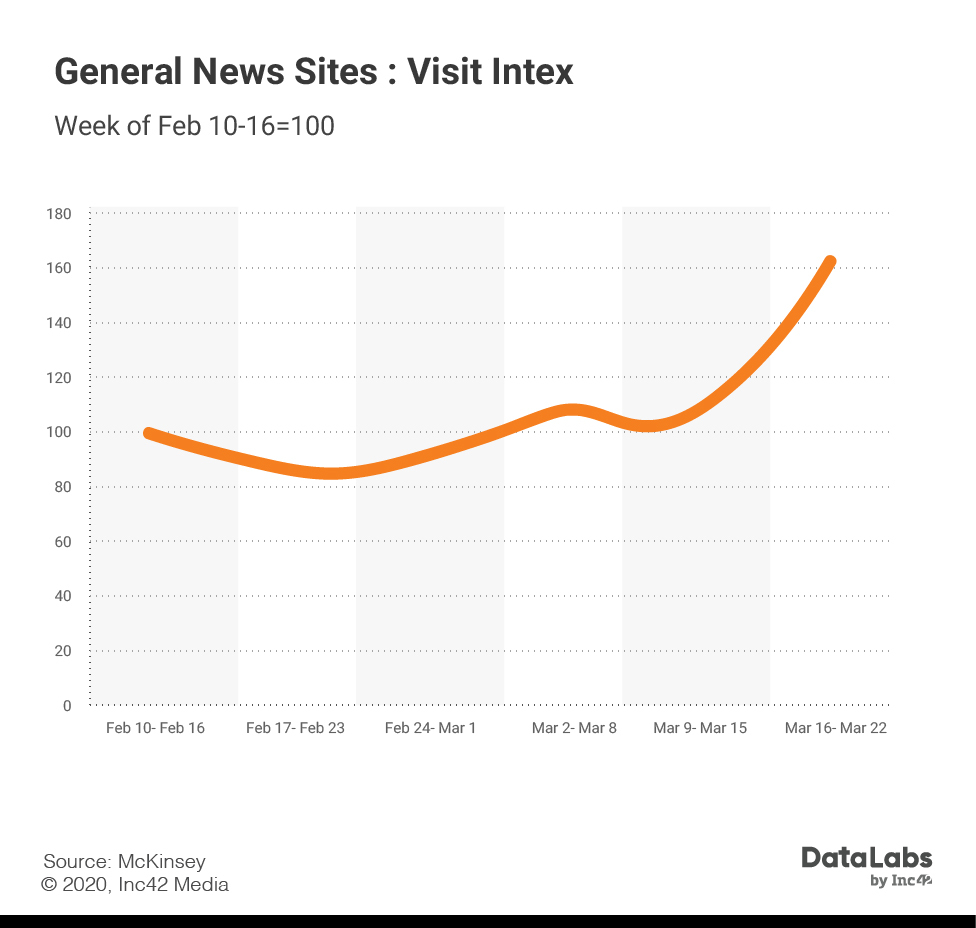 Around 40 local and national dailies went completely online during the lockdown. Only a few have been able to resume services for now. What’s more, with advertisement revenues hitting rock bottom since the crisis started and virtual events gaining hype, the key sources of revenues for the print media are on the verge of depletion.

The daily time spent using mobile Internet has increased to nearly seven-and-a-half hours, according to research from QuestMobile. This will soon stabilize and set the new normal.

“What we need to look at is if after things settle, will print ever be able to rebound?” – Bhaskar Majumdar, founder and managing partner Unicorn Ventures

So, what are the key factors which will decide the fate of print media in the aftermath of Covid-19? Will this crisis bring in a permanent behavioural change towards digital news in the Indian market and how exactly are big players preparing for this reset?

Time For Digital News To Surge

The early adopters of digital media swore by its convenience and had already made the switch to online consumption of news. However, there is a large section of the audience that stubbornly continued to consume print because of long-standing habits.

But habits tend to change — either by force or with time. The lack of print options will cause the stragglers to join the digital media brigade in the short term.

If the lockdown continues for a few weeks beyond April 15, digital news might well become the defacto choice causing a potentially irreversible change in the market, and fuel the growth in the number of players in the sector. The behavioural changes could catalyse accelerated growth for digital media and content industry at large. 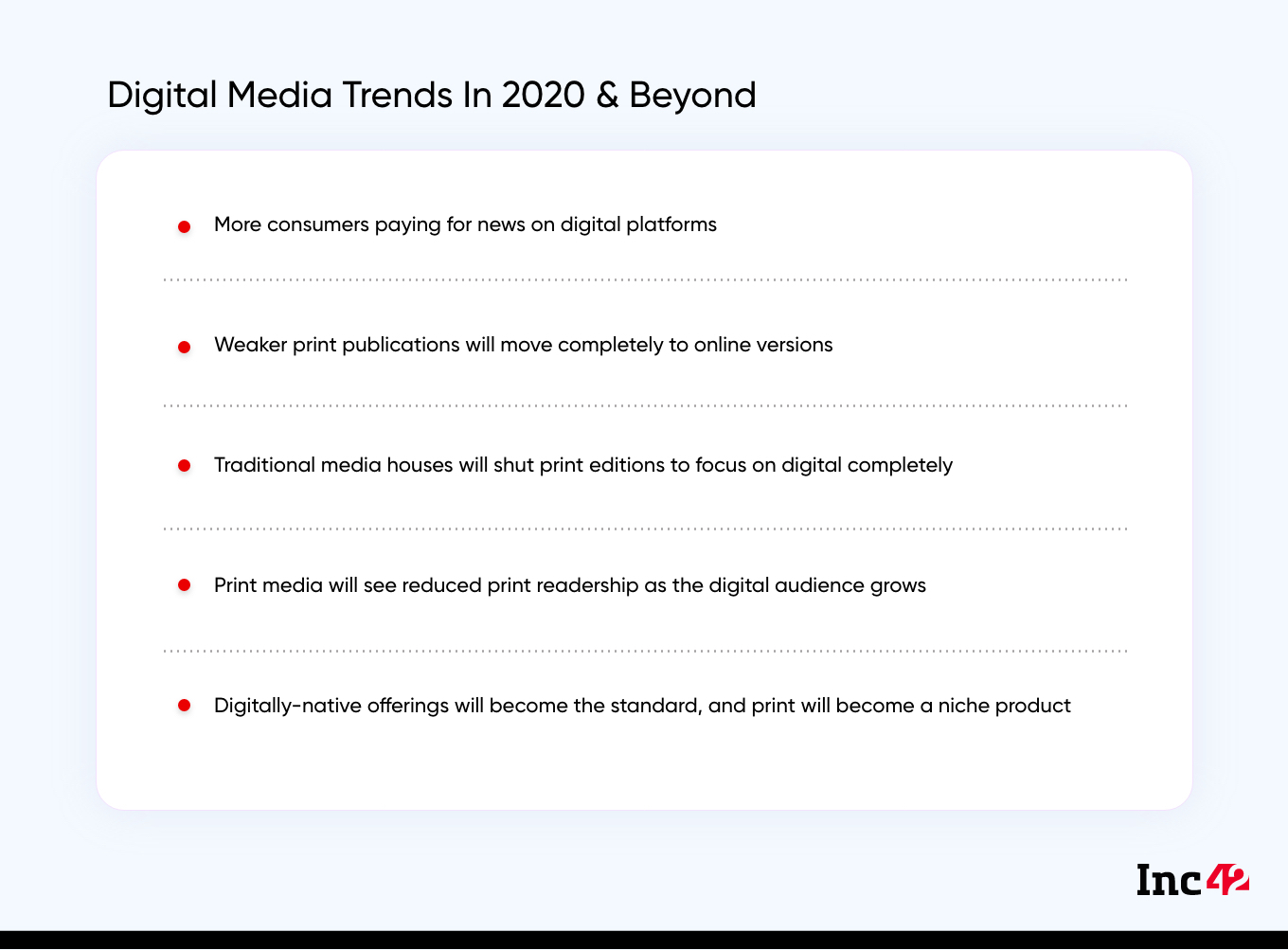 Print Media Goes Back To The Drawing Board

The present crisis is the best time for print publications to review their business models and make structural changes to ensure long-term sustainability in a digital-first world. Although, digital media still has a long road to travel in terms of reach and penetration into the regional language reader base, apps and online news platforms are doing their best to fill these gaps.

However, newspapers still have the authority that very few digital news outlets have been able to build. Expert-driven editorials, Op-Eds, mainstream reporting and mass reach are some of the areas where print, by and large takes the lead. But the current crisis demands innovation at minimal cost and creating, maintaining and distributing digital media is far cheaper than print.

Print publications which have a larger and more diverse revenue stream, wider circulation and bigger audiences will have the biggest chance of survival. Also, if print magazines can hold on to their subscriber base through their digital-only offerings through the crisis, then it would be easier to regain lost ground later on.

“The print media companies that do not leverage this forced opportunity to evolve and innovate on their business – they will face an existential crisis.”~ Anirudh Dhamani, Artha Venture Fund

We are going through some unprecedented times. Businesses remain uncertain about the depth and longevity of this pandemic and its subsequent impact, due to which consumers are spending less and are deferring planned purchases.

With both users and the companies in cash conservation mode, advertising spending will certainly decline, particularly from mid and large-size corporates who make up the large chunk of the advertisers for news media. Also, this is a great opportunity for new-age agencies to craft digital-first communication that can transcend media and platforms, rather than following the old-age mainstream approach on digital.

Brands that recognise new trends and prepare for them will emerge stronger from the disruption. Things are unlikely to return to the way they were before the pandemic, so it makes sense to be prepared for the new normal.

Brands will be more mindful about how the pandemic has changed the way its customers consume content. Plus, print advertising is expensive. It also doesn’t provide the depth of information or the engagement measurement than an online ad campaign does. 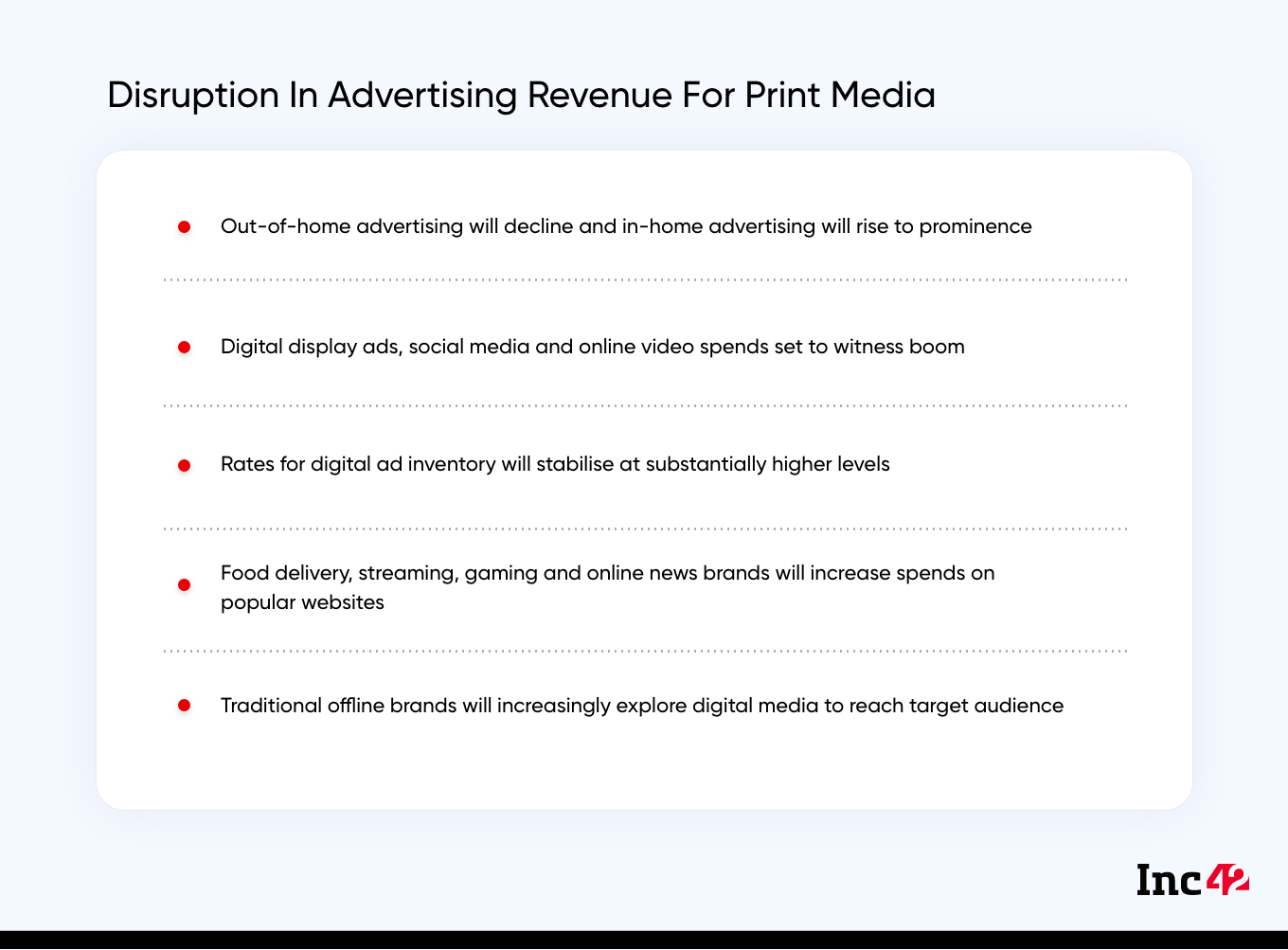 “Times like these give rise to prudence and going lean. I see marketing playing an important role in accelerating business growth, with the transition of spends from print to digital, which started a while ago, accelerating faster than ever before.” – Ahmed Aftab Naqvi, CEO & Co-Founder, Gozoop

Consolidation Will Be The Name Of The Game

Among the three major options — competition, collaboration and consolidation — the print media industry will be more inclined towards the last.

Print media was already in a decrepit state and Covid-19 has led it into an existential crisis. In such circumstances aggressively competing with the relatively better-off digital counterparts is hardly the wisest or safest option. While digital media is nascent and still experimenting with sustainable monetisation models, it is open for innovation, leaving less room for collaboration within the sector.

The working mechanism, working capital requirements and channels for the outflow of information are altogether different in both mediums, which certainly calls for more consolidation in the near future.

The New Battleground For Media

Industry leaders Inc42 talked to believe that the post-Covid-19 phase will determine the new grounds of growth for both digital and print media players. As everyone will be eyeing innovation and looking to stand out, technology will play a crucial role here.

Smart Automation was already a rapidly evolving  trend and this will gather major steam, believes Times Internet CEO Gautam Sinha. Ad Operations across many dimensions will become smarter, an area that has plagued the industry for a while.

“In addition to this, there will be massive demand for predictive models that can help media pick up signals early and be ready with contingency plans – this time everyone was caught unawares and no business likes uncertainty,” he added.

Can Digital Media Snatch The Opportunity?

The best ideas are born in hopeless situations. It’s time that digital media proves this in the Indian market and becomes the defacto media of choice for most voices of repute. Print media has long been bracing for the impact of the digital age, much before Covid-19 arrived on the scene.

In turn, this disruption might be a positive for the digital media industry, allowing players to innovate with newer technologies and user experiences to gain a bigger slice of the attention economy.

The first step for many publications is to consolidate their current audience base by changing their content strategy and aligning it with the digital consumption patterns of this audience base. This could also mean engaging a wider viewership such as regional language consumers, to fill the void left by local print media.

Print media companies also need to build or tailor their capacity for the current crisis. Experts such as Unicorn Venture’ Majumdar said if the lockdown goes on longer, layoffs will eventually start in the print space.

Further, GoZoop’s Naqvi emphasised that the time has come for consolidation between the print and digital players. At the end of the day, content is king. “Either the print-only players will die or get bought over, or they will evolve with the times,” he said.

Many believe the change has already begun and the Covid-19 crisis has just accelerated the development. Most importantly, it’s time to experiment with different content formats, and social media lead strategies said Artha’s Dhamani.  Now is the time to test the propensity of the consumer to pay for exclusive content or to test out new ideas to increase customer engagement and so on.

So will Covid-19 be the death of print? Majumdar believes that there is still hope. Those have successfully scaled up the digital vertical over the past decade might just be able to give themselves a fighting chance.

“The best print media can hope for is to slow the attrition of the user base using seamless digital offerings and live to fight another day.”