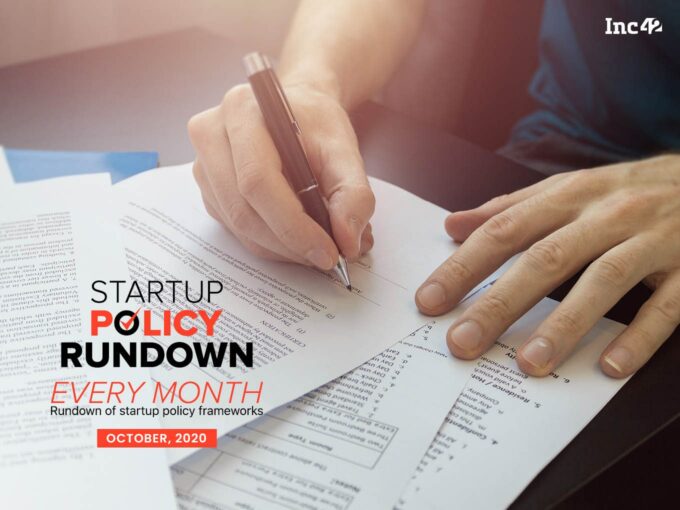 The most awaited policies for India are just around the corner. The Minister of State for Commerce and Industry Som Prakash, on Wednesday (October 28), announced that the national logistics policy, new industrial policy, ecommerce policy is in the final stages of drafting.

At the virtual event organised by FICCI, Prakash said that the new national retail trade policy is being formulated to support the development of the sectors which is expected to benefit 65 Mn small businesses. Further, he said that these policies along with the support of the industry will help in garnering a significant chunk of the country’s GDP, fuelled by trade, ecommerce, and FMCG companies.

At the same time, the government has also unveiled ‘Consolidated FDI Policy Circular of 2020,’ related to the implementation of the restrictions notified earlier this year on Foreign Direct Investment (FDI) from individual entities or citizens of neighbouring countries sharing the land border with India, including Pakistan, Afghanistan, China, Nepal, Myanmar, Bangladesh and Bhutan, allowing such investments to be made only through RBI or relevant government department.

In addition to this, the Indian government has also set up a screening panel headed by the home secretary, in collaboration with the secretary of the Department of Promotion of Industry and Internal Trade (DPIIT). The panel has been set up to vet all foreign investment proposals. Accordingly, the panel is said to approve only ‘non-controversial’ proposals, and currently, it is said that there are more than 100 Chinese investment proposals pending.

Moreover, in an attempt to boost the adoption of local apps in the country, India looks to ramp up its Mobile Seva App Store to cull Google Play Store and Apple App Store. Fintech giant Paytm has already started working on providing listing and distribution of mini-apps on its platform, free of cost. However, developers and publishers will have to give a choice of Paytm Wallet, Paytm Payments Bank, UPI, net banking and card payments to users.

This also comes at a time when Google recently hosted a policy webinar, along with Indian app developers, startup founders and other stakeholders to address concerns over its policies for the Play Store. Google refused to accept the demands of Indian startups to roll back the 30% commission.

In another update, after the Chinese apps ban by the Indian government because of the data security concerns, popular online gaming app PUBG Mobile, announced that it will be terminating all its services and access for Indian users from October 30, 2020 onwards.

Earlier this month, the Ministry of Electronics and Information Technology (MeitY) approved 16 applications under the Production Linked Incentive (PLI) Scheme for large scale electronics manufacturing in the country. Out of which, 10 has been approved under the mobile phone category. The approved international mobile phone manufacturers under this scheme include Foxconn Hon Hai, Samsung, Rising Star, Pegatron and Wistron.

It has to be noted that few of the companies selected under this programme are contract manufacturers for global tech giant Apple, which is currently looking to manufacture the iPhone 12 Series in the country. Also, both Apple and Samsung together comprise nearly 60% of global sales revenue for mobile phones, and that the PLI scheme would help increase the manufacturing base for these two companies in India.

In a bid to attract more private players to invest in Andhra Pradesh, Minister for Tourism, Culture and Youth Advancement Muttamsetti Srinivasa Rao said that the state government will release a new tourism policy soon. At an event organised by CII, Rao said that Andra Pradesh would be taking a lead among the state in resuming the tourism operations after the pandemic has affected the sector badly.

In a bid to put an end to cyberattacks in the state, the Karnataka govt is planning to introduce a cybersecurity policy to address the needs of all stakeholders, including students, working professionals and government agencies. CN Ashwanth Narayan, Karnataka’s Deputy Chief Minister CN Ashwath Narayan said that since Bengaluru is the hub for tech companies and startups, it will naturally be the prime target for cyberattacks. Therefore, a need for robust infrastructure for ensuring cybersecurity is essential, he added.

At an event organised by FICCI, National Cyber Security Coordinator Lt Gen (Dr) Rajesh Pant also said that cybercrimes in India has caused India INR 1.25 Lakh Cr loss in 2019, and cyber threats will continue to increase as the country focuses on developing smart cities and rolling out 5G network, among other initiatives.

The Joint Parliamentary Committee (JPC), which was supposed to submit the final report on the Personal Data Protection (PDP) Bill, 2019 during the monsoon session last month has been given an extension. It is now requested to submit the final bill in the second week of the winter session of Parliament. According to PTI, the final PDP bill, after incorporating the suggestions of the JPC is expected to be tabled in Parliament next year.

The JPC, chaired by BJP MP Meenakshi Lekhi issued summons to the social media giants. Lekhi said that whosoever is required, whether an individual or an entity, will be asked to depose before the panel on the issue of protection of data and its privacy and their respective social media platforms will thoroughly be examined by the panel. “It would be inappropriate and unfair to look at the calling of a social media platform from a political prism,” she added.

The Indian government recently wrote a letter to Twitter’s CEO Jack Dorsey expressing its disapproval of the misrepresentation of India’s location shown on the app, and how it brings down the country’s sovereignty and questions on Twitter’s neutrality and fairness. The development comes to light after the Twitter app displaying a location of Jammu and Kashmir’s Leh as part of the People’s Republic of China was flagged by National Security Analyst Nitin Gokhale. To this, Twitter has acknowledged the letter and said that it remains committed to working with the government and respects the sensitivities involved.

With social distancing becoming the new norm, the vehicles on the road are increasing drastically. Therefore, in a bid to reduce the congestion on Indian roads, the transport ministry recently announced that it is planning to issue guidelines on shared mobility in December, focusing on pooling services by private car owners.

In line with this, a senior government official told Mint that the norms for ridesharing through non-transport private vehicles are expected to be released in a month. “The idea is to encourage adoption of shared mobility, via cars or bikes. After this, states will have to implement it at their own discretion,” the report said.

MCA Notice To Ecommerce Companies Over Display Of ‘Country Of Origin’

The Ministry of Corporate Affairs (MCA) and the Department of Economic Affairs has decided not to mandate secondary listing for domestic firms which choose to list on overseas stock exchanges. Prior-to-this, it had put up a clause that required Indian startups and companies to list on domestic stock exchanges as well in case they chose to list overseas.

The new policy is said to allow Indian firms to list their shares in seven foreign countries for initial purposes including UK, Canada, Switzerland and the US. It is also said to allow startups to list abroad without having to first list shares at home, as a way to help startups attain higher valuations and access capital more easily.

In a bid to regulate over-the-top (OTT) platforms, the Supreme Court has issued a notice to the government, Ministry of Information and Broadcasting, and the Internet and Mobile Association of India (IAMAI) to set up an autonomous body. The plea stated that OTT/Streaming and different digital media platforms have given a way out for filmmakers and artists to release their content without being worried about getting clearance certificates for their films and series from the censor board. “Government departments have not done anything significant to regularise these OTT/Streaming Platforms.”

Also, the SC has issued a notice to Centre, Google, Amazon and Facebook over a petition filed by CPI MP Binoy Viswam seeking data protection of transactions made over Unified Payments Interface (UPI).

At the same time, the Internet Freedom Foundation (IFF), an Indian digital rights advocacy group, has raised questions over the government’s move to call on tech companies to allow backdoor access to encrypted communications. In an RTI filed with the home ministry, external affairs ministry and IT ministry, the group asks if any legal opinion was sought before becoming a signatory, after India’s move to join five other countries, including the US, in urging tech companies to end encryption comes to light.

The Central Pollution Control Board (CPCB) recently issued a notice to Flipkart and Patanjali Peya under Section 5 of the Environment (Protection) Act, 1986. Accordingly, the two companies have been asked to shut down operations and pay environment compensation for not complying with the provisions of Plastic Waste Management (Amendment) Rules 2018.

“These companies were issued show-cause notices as they have not provided information for evidence-based assessment of the implementation of an action plan for fulfillment of Extended Producer Responsibility (ERP) liability,” said CPCB.

The Department of Heavy Industry (DHI) has floated an Expression of Interest (EoI), inviting proposals from government organisations, public sector undertakings (PSUs), state-owned distribution companies and other private companies to set up charging infrastructure for electric vehicles (EVs). The proposals are for building EV charging infrastructure along some of the country’s major expressways connecting metric cities.

The Reserve Bank of India (RBI) recently announced that the RTGS system will be made available on all days starting from December. This is said to facilitate swift and seamless payments in real-time for domestic businesses and institutions. Presently, the RTGS system is available for customers from 7:00 am to 6:00 pm on all working days of a week, except the second and fourth Saturdays of every month.

In another update, RBI has issued fresh guidelines under which payment aggregators will have to use UPI or Bharat QR as one interoperable QR code by March 21, 2022, as a measure to unify the burgeoning fintech opportunity. In addition to this, it has also barred payment system operators (PSOs) from launching any new proprietary QR code for payment transactions.

The joint secretary in the Union Agriculture Ministry and CEO of Pradhan Mantri Fasal Bima Yojana (PMFBY) Ashish Kumar Bhutani said that the government is planning to create an agristack to help farmers for easy access to various farm schemes, alongside provide common data infrastructure of all farmers along with land record details. “This will act as a one-stop-shop for data, including access to finance by farmers, startups, and researchers for developing new apps, so that the benefits reach the grassroots,” he added.