In a previous edition of our crypto economy newsletter that looked into the CBDC race, we discussed the RBI’s plans regarding the central bank digital currency that India is likely to introduce. As more than 86% of the central banks worldwide are mulling to roll out some form of digital currency or other, it won’t be an exaggeration to say that CBDCs are the future of money.

The future of CBDC in India has always been a bit ambiguous. How the RBI would launch it remained a puzzle for a long time with no clear roadmap in sight. Then the central bank governor Shaktikanta Das announced in August 2021 that CBDC trials could take off in about three months.

Although India was in no hurry to ‘go the CBDC way’, there might have been specific reasons for this announcement. Speaking at The Global Fintech Festival on September 28, T Rabi Shankar, deputy governor of the RBI, pointed out that the adoption of digital payments became instantaneous within the country, but the environment for cross-border payments stagnated for decades.

“CBDCs, if both countries have it, can make time-zone differences disappear by replacing bank settlements with currency delivery, which can take place even if the payment systems are closed,” he added.

Should India Go For Wholesale, Retail Or A Hybrid Architecture?

China has adopted a hybrid architecture that includes both retail and wholesale CBDCs. While central banks like the RBI can directly issue retail CBDCs to common people, wholesale CBDCs are usually disbursed to commercial banks or other financial institutions. However, the latter will disburse the money to its users in traditional currency. 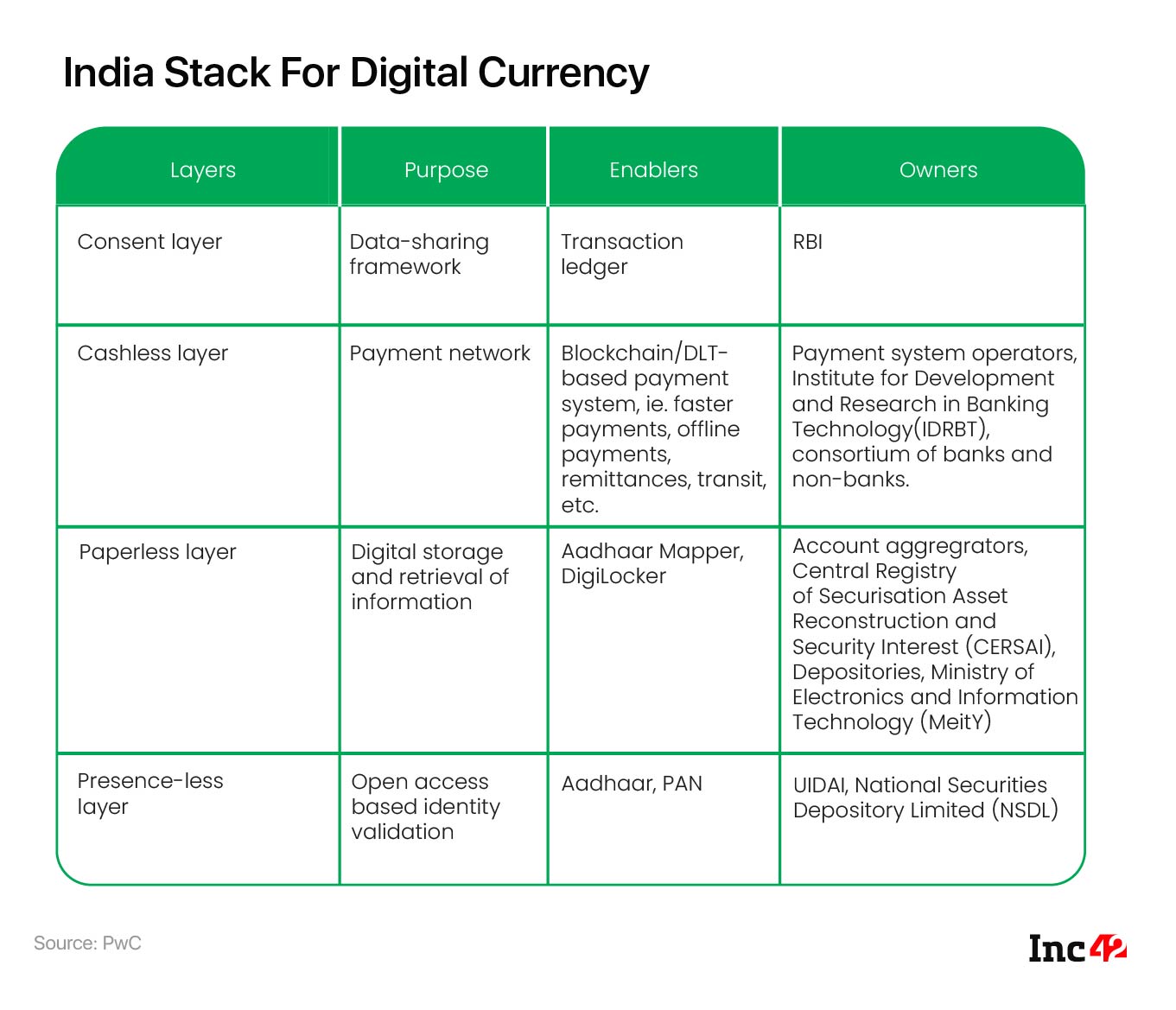 Sources close to the RBI’s CBDC developments have also told Inc42 that the central bank is looking at a hybrid architecture and may launch the wholesale CBDC first, as part of the pilot phase.

Meanwhile, Tanvi Ratna’s Policy 4.0, a digital currency policy research body that published a detailed report on China’s CBDC e-CNY (digital yuan), has set up an advisory board to guide the development of innovative policy frameworks in India.

The board comprises Ashima Goyal, a member of the RBI’s Monetary Policy Committee; Sandeep Parekh, a former regulator with SEBI and a leading Indian financial regulatory expert; Douglas Arner, an international financial regulatory expert and a participant of the BIS, G20 FATF and other global forums on digital currency regulation; Pramit Pal Chaudhuri, a two-time member of India’s National Security Advisory Board, and Dilip Cherian, cofounder of Perfect Relations. 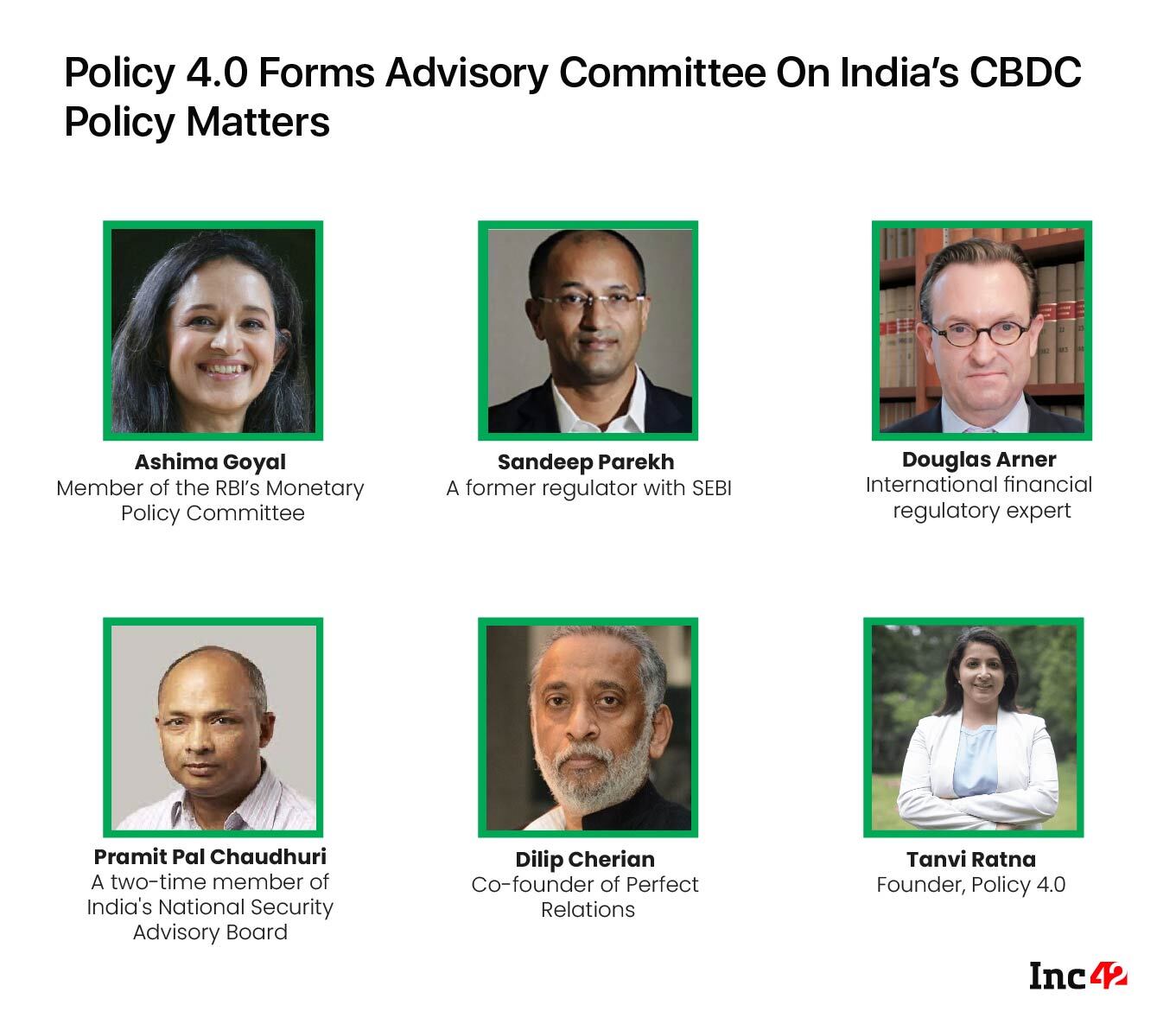 Speaking at the recently concluded Crypto Summit, 2021, Ratna of Policy 4.0 said that CBDCs are different from popular cryptocurrencies, although both are digital currencies and architecturally, may have some similarities.

Will these initiatives hasten up the process of CBDC adoption? It may not be that simple.

In his speech at The Global Fintech Festival, RBI’s Shankar said, “It is virtually impossible for legislation to keep in step with the fast mutating fintech landscape… Slowing down the process of change, which attracts the criticism of stifling innovation, is often the best way to ensure customer protection.”

Will that impact India’s stake in the global currency economy? Only time will tell. Tipping Bitcoin On Twitter: Twitter is enabling its tipping feature for everyone with a host of payment options, including the crypto. It has partnered with Razorpay for payments in India and joined hands with Strike to let people tip with bitcoin. But currently, bitcoin tipping is only available in El Salvador and a few U.S. cities, writes Twitter’s product manager Esthar Crawford.

Having sold over 40 Mn music albums worldwide, rapper, musician and entertainer Snoop Dogg has already made quite a buzz on Twitter for collecting non-fungible tokens under the pseudonym and Twitter handle @CozomoMedici.

In this tweet, the hip hop icon announced plans of setting up his mansion and NFT collection in The Sandbox, where Dogg will also perform live and interact with players.

The tickets to the metaverse were reportedly sold in 20 minutes.

After users complained about UPI payment failures on the CoinDCX platform, the crypto exchange issued a statement, saying that “the UPI deposits will be temporarily unavailable due to technical issues at our banking partner’s end”.

The exchange recently introduced a blockchain and crypto learning module in sign language to help the differently-abled. The content is available on its crypto education portal called DCX Learn.

The Central Board of Secondary Education (CBSE) came up with a blockchain solution to ensure secure digitisation and tamper-proof storage of students’ records. The project called Academic Blockchain Documents was developed in association with the blockchain arm of the National Informatics Centre (NIC).

The fast-growing crypto industry in India is expected to create an economic value addition of $184 Bn by 2030 in terms of investments and cost savings. A NASSCOM report also said that the Indian cryptotech industry is likely to reach $241 Mn by then. Globally, the sector is estimated to surpass $1.6 Bn by 2021 and $2.3 Bn by 2026.

With more than 60% of Indian states adopting cryptotech and over 15 Mn retail investors in this space, the sector is increasingly attracting new startups. India is currently home to 230+ startups operating in this segment.

China has been at loggerheads with cryptocurrencies for some years now. In a recent development, the People’s Bank of China (PBoC), the country’s central bank, and nine other top regulators such as China Banking and Insurance Regulatory Commission (CBIRC) and securities and foreign exchange authority came together to ban all things crypto, including mining, trading and holding them.

China’s latest crackdown on crypto may help drive the adoption of its digital yuan that may make an official debut at the Beijing Winter Olympics in 2022.

India has been following China closely on CBDC. Will it go for the ban too and drive out a sunrise industry? We hope not.