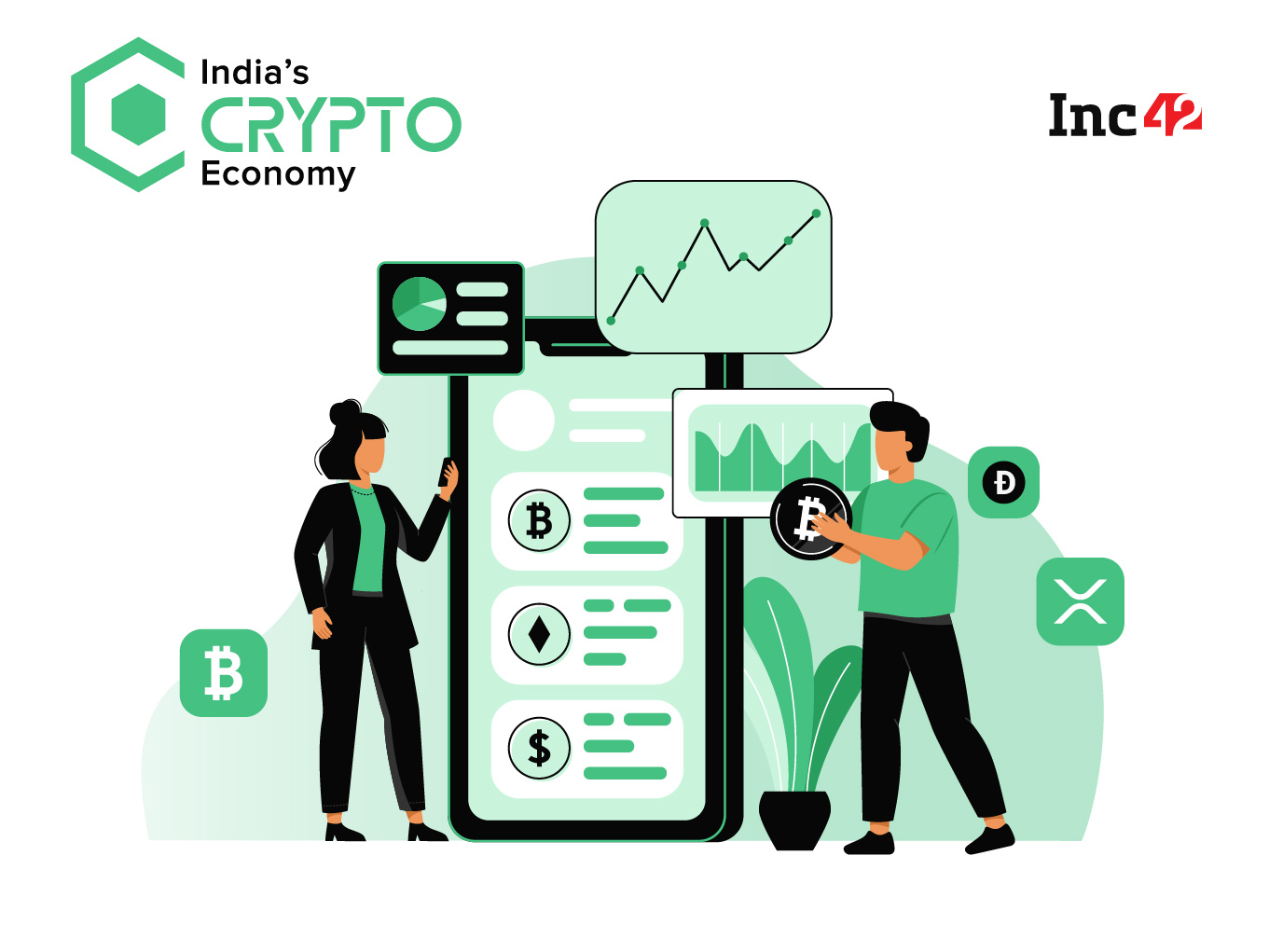 India is working towards regulating cryptocurrencies, but the key question is: Can it crackdown on rampant crypto transactions on the dark web?

With crypto as the most popular currency on the dark web, it is getting darker, especially in India. Ross William Ulbricht, aka the ‘Dread Pirate Roberts’, founder of the first dark web marketplace Silk Road, once dreamt of it as ‘a brand that people can come to trust and rally behind. Silk Road chat, Silk Road exchange, Silk Road credit union, Silk Road market, Silk Road everything!’

Silk Road was shut down by the FBI in 2013 (Silk Road 2.0 suffered a similar fate next year), with Ulbricht serving double life imprisonment plus 40 years without parole in the US. However, the dark web has only grown stronger and spread globally, and India is one of the key markets for dark web users. According to a Statista survey in 2019, India accounts for 26% of the global population using the dark web, the highest usage worldwide. 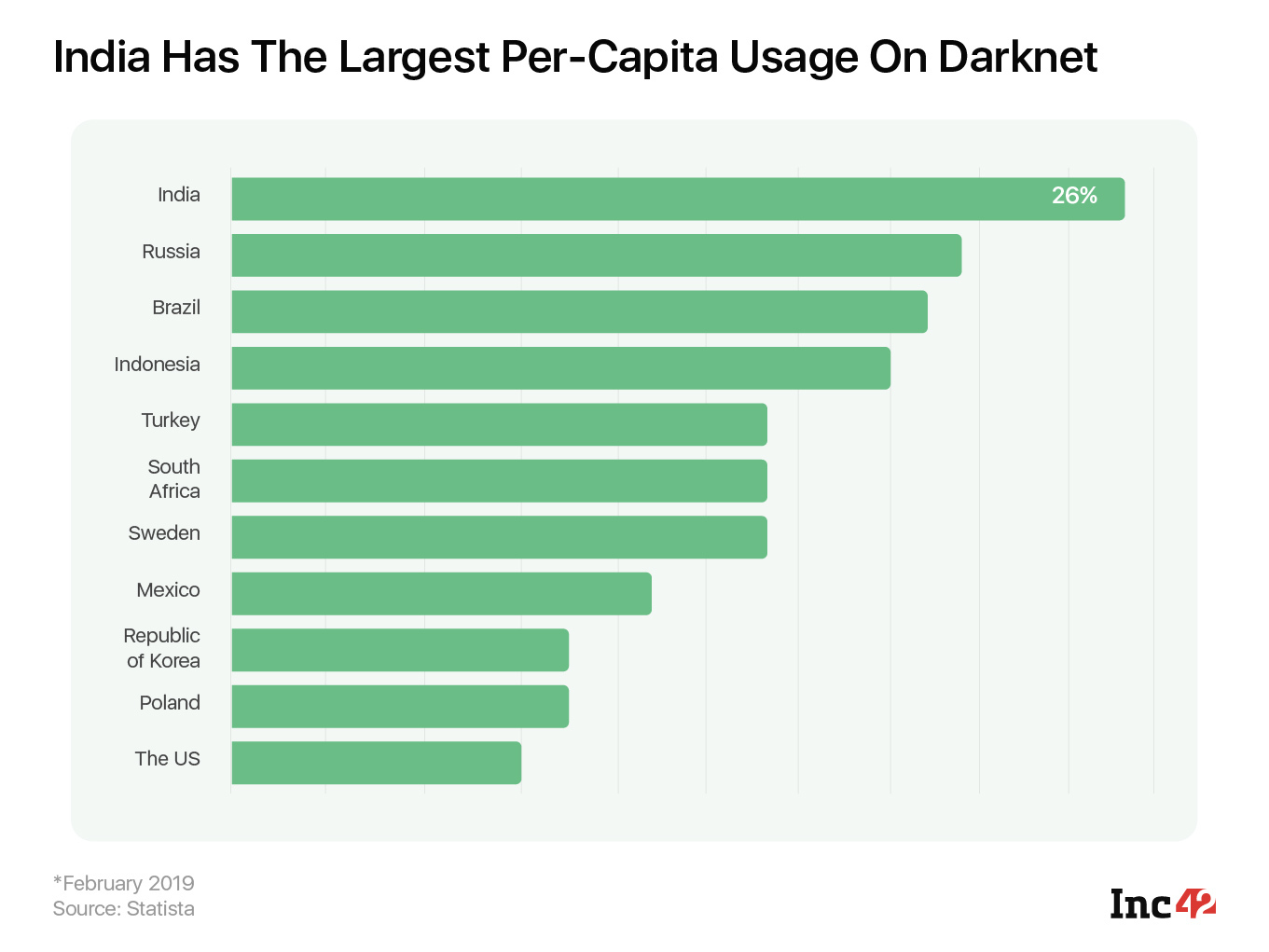 So, it is not surprising that Indian intelligence agencies, right from the Research and Analysis Wing (RAW) to the Narcotics Control Bureau (NCB) and the Indian police, are trying to clip the wings of the dark web networks across the country.

The NCB  recently busted one such network and arrested Makarand P Adivirkar, a Mumbai resident also known as the ‘Crypto King’ in dark web circles, for allegedly providing bitcoins to facilitate the purchase of narcotic drugs on the dark web.

“It’s just the beginning. The network is much bigger.”

For the uninitiated, the NCB had been looking for Adivirkar since last year after seizing 20 LSD blots from Kharodi village in Malad. The psychotropic substance was purchased from Europe by a Mumbai-based drug peddler who used bitcoin for the transaction.

Adivirkar was in great demand as people approached him to purchase illegal drugs like LSD. (a hallucinogenic drug). He bought these drugs on the dark web using crypto and sold them to his ‘customers’, earning commissions on the drug purchase and the cash-to-crypto conversion.

Wankhede declined to name the wallets used for those transactions. “Adivirkar used multiple wallets and multiple cryptocurrencies, including bitcoin among others, to purchase the drugs,” he added. The accused was buying illegal drugs from Europe and the American continent.

Meanwhile, WazirX clarified that the accused did not have a WazirX wallet. Founder and CEO Nischal Shetty said, “On June 11, 2021, WazirX received an email from the NCB enquiring about the said accused and his trading activity on WazirX. Upon checking our records, we identified that the accused is not a WazirX user, and we communicated the same to the authorities on June 12, 2021.”

Wankhede had earlier told Vice that the accused had multiple bitcoin wallets on platforms like WazirX, and facilitated payments for multiple drug dealer networks in India.

This is not the first time when India busted dark web transactions. In 2020, the Bengaluru Police arrested eight people for buying illegal drugs on the dark web. The police also confiscated bitcoin worth INR 9 Cr from the gang. That was one of the 30 cases that Bengaluru police had registered pertaining to the purchase of illicit drugs on the dark web. Requesting anonymity, a RAW official told Inc42 that apart from drugs, several other areas have been identified on the dark web as these are getting popular in the Indian subcontinent. The agency has also tracked how the dark web is used for terror financing, and several people have already been arrested, he added. 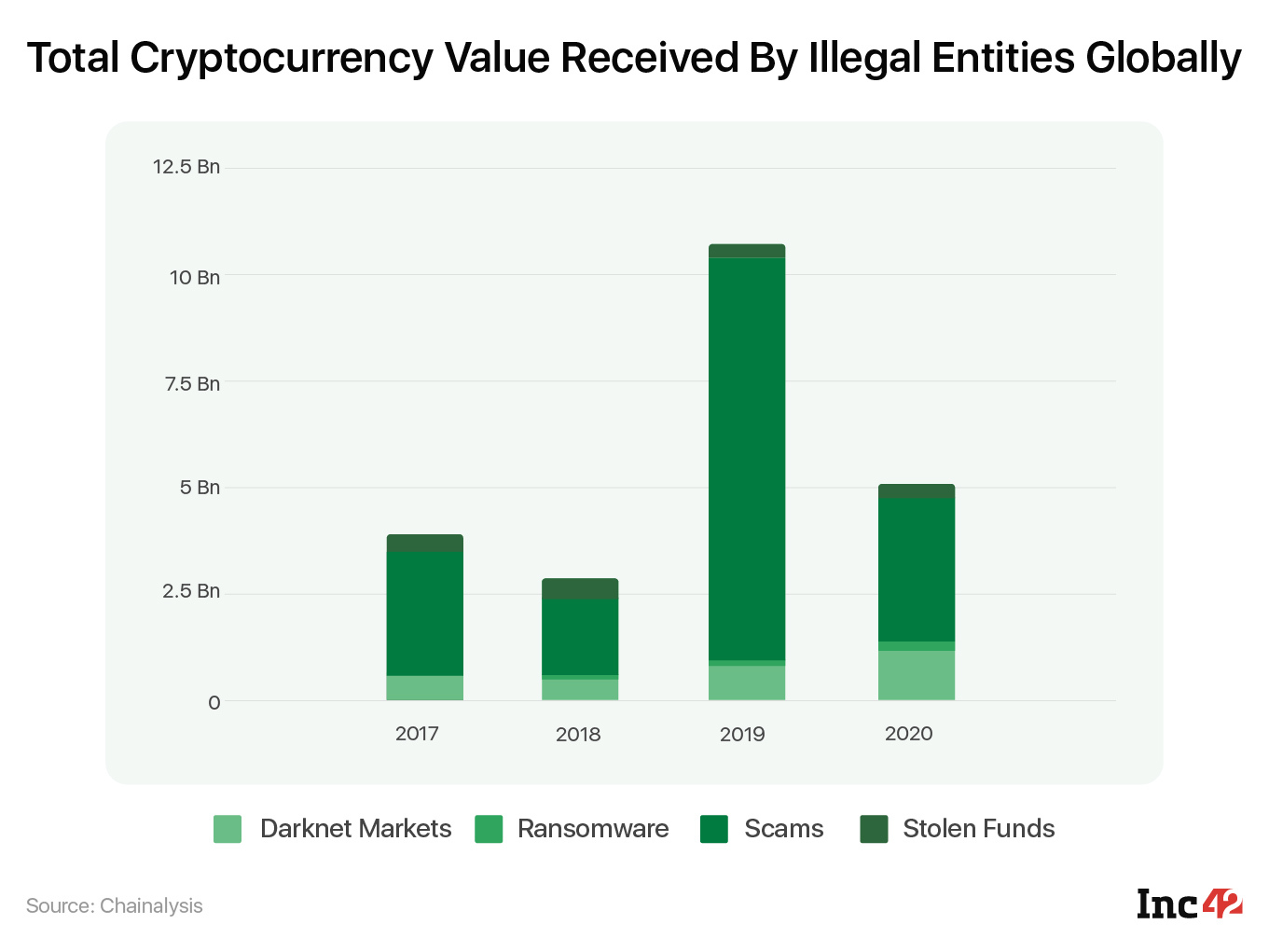 India is working towards regulating cryptocurrencies, but the key question is: Can it crackdown on rampant crypto transactions on the dark web? 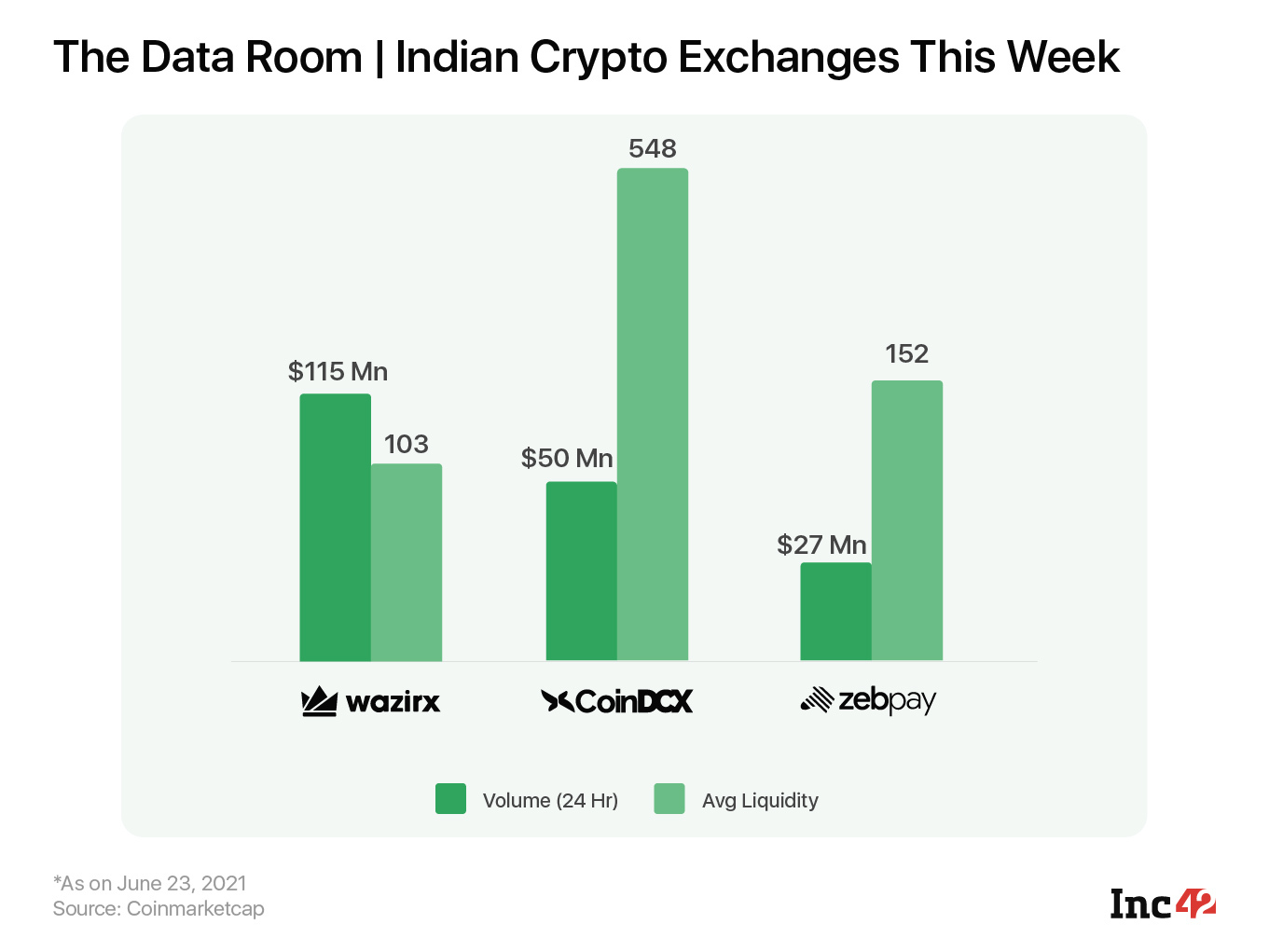 Why Crime May Kill Crypto: Marking the increasing ransomware payments in crypto and similar payouts for other crimes, the Wall Street Journal, in a recent report, argues how cryptocurrencies have become far too good at one thing: Enabling crime. Read the report here.

Why China Is Cracking Down On Crypto: To promote its own digital currency — the e-yuan — a tender that PayPal founder Peter Thiel called a “totalitarian measuring device”, China has started cracking down on crypto, which has led to the freefall of bitcoin. However, as other countries are taking steps towards regulating crypto, will China’s crackdown do the country much good? Read it here.

Michael Saylor, founder and CEO of the US-based intelligence firm Microstrategy that owns the maximum number of bitcoins and recently raised $500 Mn in bonds to acquire more, termed China’s recent crackdown on mining as the key reason behind bitcoin’s fall.

SBI, HDFC Bank, And 13 Others Form A Blockchain Company To Process Letter Of Credit

After the Bankchain project, leading Indian banks, including the State Bank of India, HDFC Bank, ICICI Bank and 12 others, have come together to further widen the blockchain application to processing Letters of Credit (LCs/LoCs), GST invoices and e-way bills.

These 15 banks have formed a company called Indian Banks’ Blockchain Infrastructure Co. Each member will invest INR 5 Cr and hold an equal stake of 6.66% in the company. The project is expected to use Infosys’ Finacle Connect, a blockchain-based platform that enables digitisation and automation of trade-related finance processes. It will also have a five-member shareholder-directors’ board, with representatives from Bank of Baroda, ICICI Bank, Axis Bank, Kotak Mahindra Bank and SBI. However, all 15 representatives will sit on the board on an annual rotation basis.

Indian Crypto Exchanges Coming Together To Lobby For Regulation

Top Indian crypto exchanges are in the final stages of joining IndiaTech to increase pressure on the government to regulate cryptocurrencies in India. IndiaTech is an industry lobby representing the country’s consumer internet startups, unicorns and investors.

Senior executives at many other crypto exchanges said they were considering the proposal to join IndiaTech but added that their work with the Blockchain and Crypto Assets Council (BACC), a part of the Internet and Mobile Association of India (IAMAI), would continue. All leading crypto exchanges, including WazirX, CoinDCX, ZebPay and CoinSwitch Kuber, are currently members of the BACC.

Crypto Trading, A Tech Bubble, Should Be Limited To Sophisticated Investors: Mohandas Pai

Citing the risk involved due to the extreme volatility of crypto assets, investor and former Infosys CFO Mohandas Pai told Inc42 that most people are not sure about crypto and what is going to happen in India, although blockchain (the tech behind crypto) is a bedrock technology and has multiple uses.

“We have not seen this kind of volatility in any asset class for a long time. I think this is a technology bubble of sorts. Given the scenario, regulators like the RBI or SEBI should step in to adopt blockchain technology, and crypto trading should be allowed in a restricted manner. Only mature/sophisticated investors should be allowed to invest as they understand the risk involved,” commented Pai.

As bitcoin continued to plunge and sank to $30K, its lowest since January 2, 2021, Elon Musk’s iconic Tesla could be in trouble. The company recently bought bitcoins worth $1.5 Bn at a much higher price and will have to write down the value of the celebrated wager. According to reports, Tesla is obliged to take an impairment on every coin that it bought. Simply put, it will have to pay the difference between the purchase price and the market low of $29,511 for each slug. It means in Q2, the company must shoulder a pre-tax loss estimated to be $122 Mn.

Novogratz said, “We had China really be much more forceful in their idea to ban cryptocurrency. That has created a retail deleveraging. A lot of crypto happens in Asia, and a lot of it is Chinese focussed. So, we are seeing big liquidations, and it is hard to call a bottom.”

Meanwhile, crypto investments have already surged this year, with VCs from all over the world pouring in more than $17 Bn till June, this year. India, too, has witnessed a record inflow of VC money in this space but it is not more than 0.5% of the global VCs’ contribution.

In the next one year, this may rise to 1-2%, believe the founders of crypto startups, if the regulatory situation does not worsen. But without more clarity, it will be a wait-and-watch strategy for all stakeholders.