AI and blockchain have the potential to unlock disputes, said Justice DY Chandrachud

In a twitter post, Mahindra said that it took him two years to find a company like Hapramp. Further, he said that the company brings together a best-in-class combination of creativity, technology and data protection.

Took 2 yrs, but I finally found the start-up I was looking for! @Hapramp is indigenous, built by 5 young founders & brings together a best-in-class combination of creativity, technology & data protection. Look out for @gosocial_app their social networking platform. @j_bindra https://t.co/9mFwzjQXjF

Through its platform called 1Ramp.io, the company plans to build new ways for the creators to monetize their expertise and content. “At the same time, we will also keep testing features and tools that will help budding creators learn and practice,” Hapramp said in a Linkedin post.

Founded in 2018, Hapramp was founded by Mofid Ansari, Pratyush Singh, Rajat Dangi and Shubhendra Vikram. According to its website, the company works a social media platform powered by Steem blockchain, allowing artists and creators to take various creative challenges like photography, art and writing among others and help them earn rewards. 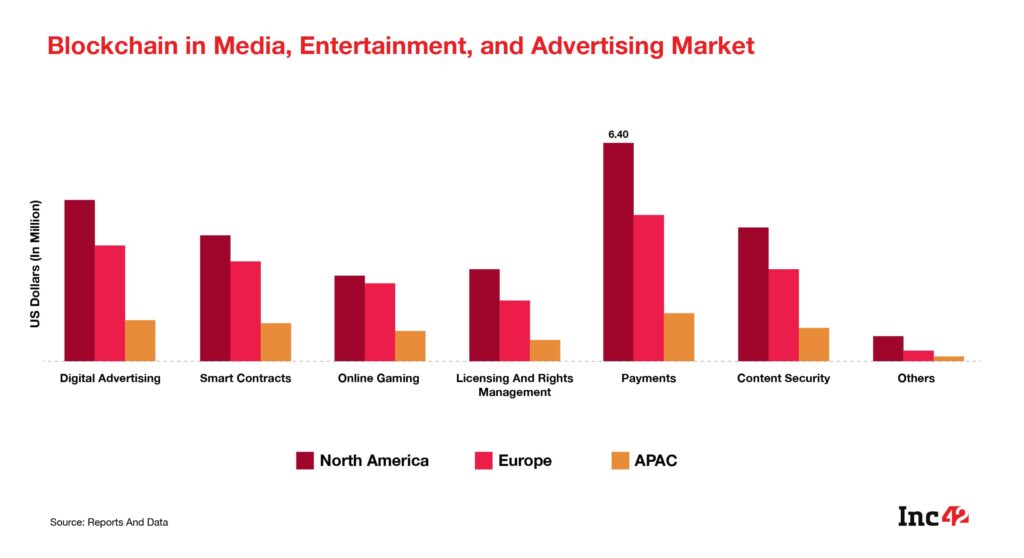 According to Reports and Data, blockchain in media, entertainment and advertising market is said to increase profits of content creators by providing real-time consumption-based pricing against assets with an immutable state and digital identity. It stated that blockchain technology can reduce transaction cost by 40-80%, which in turn makes payment application the leading segment.

Niti Aayog’s CEO Amitabh Kant lauded the Supreme Court for adopting technology during Covid-19 pandemic in a sustainable and forward-thinking manner and said that each arm of the Indian system is working towards a solution-driven future.

At the Catalysing Online Dispute Resolution (ODR) in India, a webinar conducted by Niti Aayog in association with Agami and Omidyar Network India, on June 6 (Saturday), Justice DY Chandrachud said that artificial intelligence and blockchain have the potential to unlock disputes, where they have a mine of data on National Judicial Data Grid, which can be analysed seamlessly. He added that the e-committee had taken the decision to adopt open APIs to unlock creativity and entrepreneurial energy for justice services.

Sharat Chandra, a Hashgraph MVP ambassador told Inc42 that all courts can run nodes for the blockchain network and can also have few public nodes for Bar Council of India for added transparency. “This is going to be revolutionary as Justice Chandrachud will be around for the next couple of years and in line to become the next Chief Justice of the Supreme Court,” he added.

New-Delhi based digital marketing company Venets Media filed a plea against the Telecom Regulatory Authority of India (TRAI) in the Delhi High Court related to the implementation partner, Tanla Solutions over the blockchain-based anti-spam system. The company has been the implementation partner of the distributed ledger-based system for Bharti Airtel, Vodafone Idea and state-run Bharat Sanchar Nigam Ltd (BSNL), which the petitioner believes is a conflict of interest among telemarketers.

In the petition, Venets Media alleged that the regulator had not addressed the concerns of thousands of aggregators, telemarketers, value-added service providers and resellers, in sharing, uploading and getting pre-approved the sensitive and commercially invaluable client data to a platform controlled by a dominant private operator, with similar business interests. The Delhi HC has asked TRAI to respond by June 15.

Swansea-based Blockchain advertising marketplace AdsDax achieved over 1,372 transactions per second on Hedra Hashgraph’s enterprise-grade DLT.  The announcement comes after AdsDax expanded the capacity of its infrastructure and began running large advertising campaigns in partnership with Zee Entertainment. The company claimed that this was the first time that DLT has reached this volume in a live, commercial environment.

The campaign involved real-time micropayments in cryptocurrency for each impression occurring on the ad network. Ian Mullins, CEO at AdsDax said that the company is one step closer to its goal to pay micro-rewards to consumers for their time, data, and attention whilst surfing the internet. Besides Zee Entertainment, AdsDax has been working with other ad agencies, including Havas Media, GroupM and Isobar. The blockchain ad platform is said to enable real-time payments for publishers and innovate in the fields of content creation and monetisation.

South Korea’s second-largest city, Busan, recently announced that it will be providing its citizens access to government services using a blockchain-based identification app developed by Coinplug, a blockchain startup that has been working with the regulatory sandbox of the Busan blockchain regulation-free zone.

With this new blockchain-based ID app, the user can store the data on their devices, and only a cryptographic proof of the information is submitted to the blockchain. This, in a way, provides personal data privacy and the need to create tamper-proof records, be it land records, medical certificates and others.

The Australian Marine Conservation Society (AMCS) has partnered with tech firm Two Hands, where it will be leveraging blockchain to support global food safety, seafood mislabelling and seafood sustainability. The company said that it will be using blockchain and smart tagging, where the duo will be tracking the origin of Australian seafood. In other words, hoteliers and consumers across the world will be able to use AMCS’ GoodFish Sustainable Seafood Guide to help them buy directly from sustainable Australian fishers.

The company said that when the seafood passes through multiple hands, and in the process, this opens the potential for food fraud. Further, it said that the technology restores trust and closeness to fishers, farmers and consumers through ethical food supply chains.