Uber To Launch Its Carpooling Service, UberPOOL In Bangalore

Uber To Launch Its Carpooling Service, UberPOOL In Bangalore

Uber has announced that it is launching its carpooling service, UberPOOL in India, starting with Bangalore.

The new service will allow, riders, share a ride and split the cost with another person who happens to be requesting a ride along a similar route in your city.  After finding a match, Uber, will notify the rider first name of the co-rider.

“With UberPOOL we’ll aim to achieve our shared vision to make Bangalore a city of the future, one that looks a whole lot greener, cleaner, and more efficient thanks to fewer cars and more shared rides. Reducing the number of cars on the roads is beneficial not only to the environment, but also helps reduce traffic and congestion currently faced by commuters in our city,” Uber said in a blogpost. 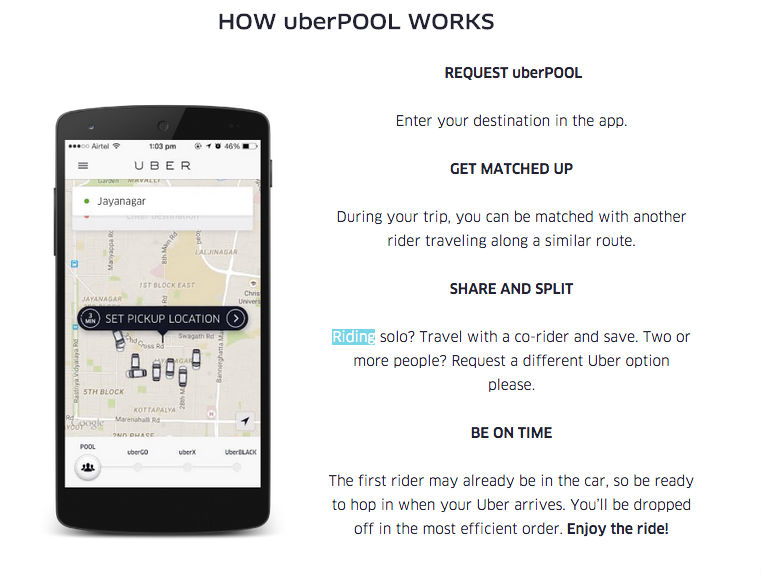 The company is yet to finalize the pricing for UberPOOL for the riders. On the driver side, as per the company, drivers can make about 10-15% more revenues from UberPOOL, as compared to the Uber platform.

Though the service will help riders cut down the spends while they travel, but, this might increase the waiting time for the riders and obviously, sometimes even deviation from the routes. Adding on, sharing a ride with a unknown co-rider might also increase the security and safety concerns.

Uber had first launched uberPOOL in San Francisco in August 2014. Since then, it has added POOL in Paris, New York, Los Angeles, and Austin.

Few days back, Ola had announced launch of Shuttle service in Bangalore and Gurgaon.