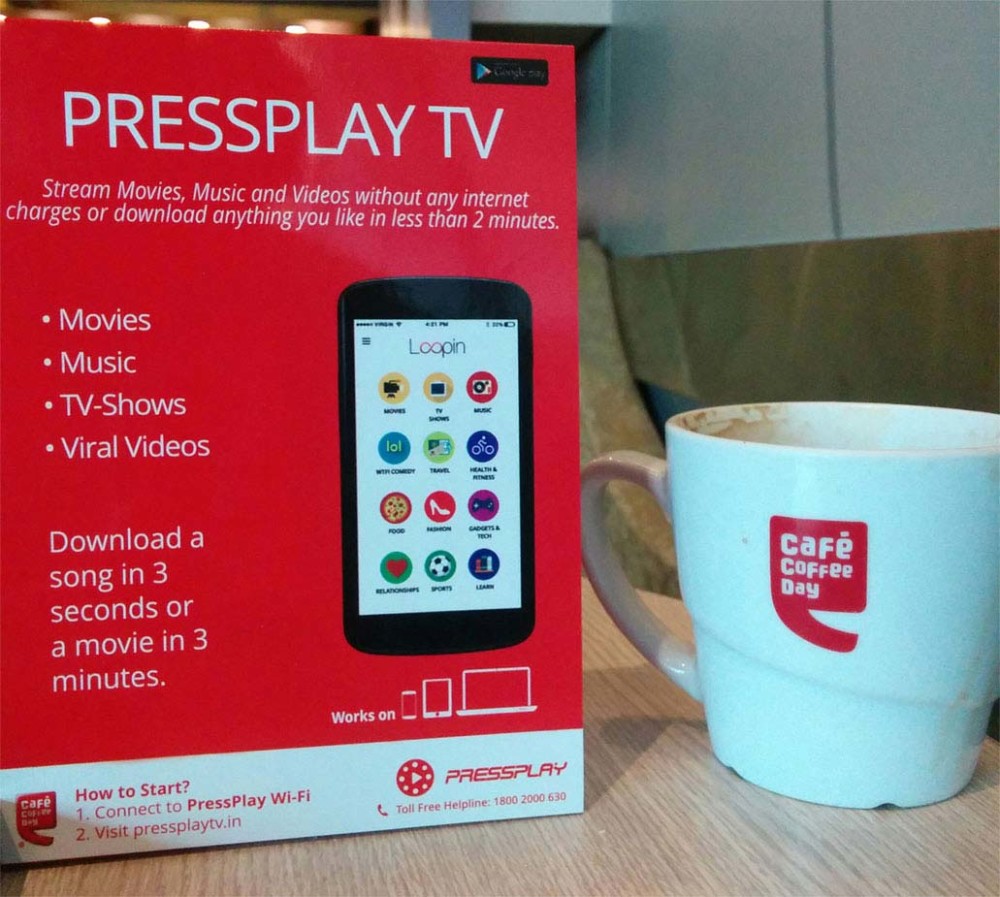 PressPlay, a technology company innovating at the intersection of entertainment & travel, was founded in 2013 by George Abraham and Anand Sinha.

Earlier, Pressplay use to rent tablets to long-distance bus passengers for about INR 100. They placed over 1,000 such tablets in buses. But it seemed difficult to scale up with this asset-heavy model, the company instead of providing the tablets to the passengers, it helps them connect to its (PressPlay) hotspot box using smartphones and stream all the content directly, without any buffering or any data charges.

PressPlay’s app comes loaded with about 30 movies, 1,000 songs and 10 documentaries & cartoons as well. Its app which is currently on android consists of different category-based channels. Users can pick the categories they are interested in and can stream video content. The content on the app is also dynamic – it’s different on users 3G network, inside a café, bus, hotels, cafes, hospitals, clinics, salons and PG’s/hostels.

Speaking on the development, Anand Sinha, co-founder & CEO at PressPlay, said, “We want to disrupt the way video content is consumed and are lazer focused on letting our users discover highly engaging and quality short & long form content and also increase our hotspot footprint for a buffer free streaming experience.”

The firm also tied up with Café Coffee Day to convert their outlets into PressPlay TV hotspots.

Currently, it has 500k users per month on the network and more than 2000 hotspots across the country. They aim to hit 10,000 hotspots in the next 6 months with a user base of 100k users per day.

The company also launched the first version of its ad platform with Oyo, Healthkart, Swiggy and Truly Madly as their first partners. “We are very excited with the things that we can build on top of our network – a theatre chain, an amazing ad platform for our partners, an app distribution platform – everything is a possibility. We will be hiring 100 more people in the next 3 months and will be expanding aggressively,” said Sinha.

PressPlay had raised an early stage funding worth $2.2 Mn from Sequoia and a group of angel investors in pre-series A round, and prior to that, it had raised a seed capital of $1Mn.

Currently, the closest competition for PressPlay is the Hotstar app by Star India. The Hotstar app, using the user’s internet data or wifi, allows them to watch television serials, sports and movies on their smartphones free of cost.