The tarmac of Indian roads are on fire, with the war between taxi apps Ola and Uber heating up. As per a story by Bloomberg, Ola’s least expensive compact car service ‘Micro’, which was launched to challenge Uber’s UberGo is struggling to keep up with the surge in demand.

Ola had launched the service across seven of India’s largest cities last month including Bangalore, New Delhi and Mumbai. The Micro service, in a matter of weeks, has become the largest service in a portfolio of its offerings encompassing Ola Mini, Ola Sedan, and three-wheeled Ola Auto. The service offers rides starting from INR 6 ($0.09) per kilometre in direct comparison to UberGo’s pricing of INR 5($0.07) per kilometre in some cities.

Ola’s new CMO  and head of categories, Raghuvesh Sarup, stated that Ola is receiving hundreds of thousands of requests every day that it is not able to fulfil. He also claimed that this demand is almost half of Uber’s current total daily bookings and is expected to surpass Uber’s per-day orders in a month.

But he didn’t comment on where he was getting the Uber numbers from.

Meanwhile, numbers released by WhichApp that tracks apps on 90,000 Android users in India, showed that Ola’s app was installed more than twice as many times as Uber in 2015. 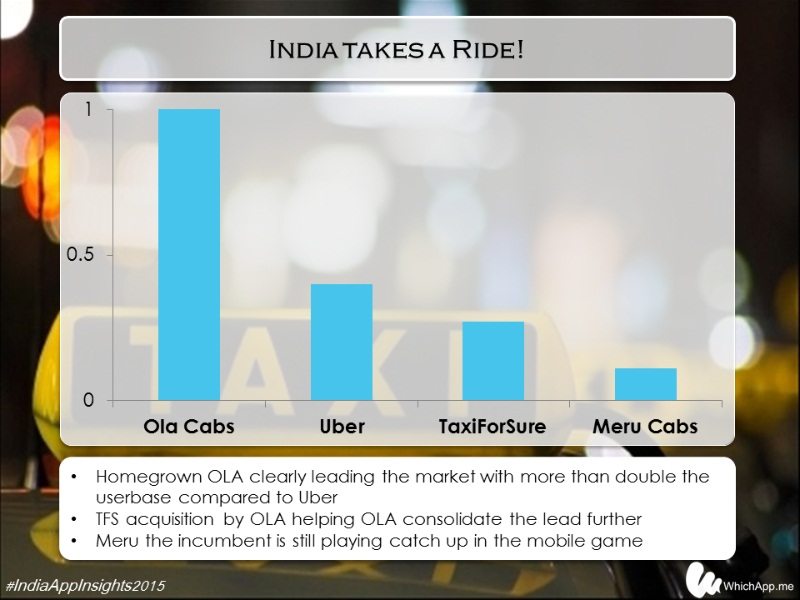 Ola has been taking aggressive measures to upstage rival Uber. Incidentally, this week, Ola had announced plans to expand the fleet of CNG cars on its platform over the next six months. For this, the company plans to spend $30 Mn for adopting CNG cabs in Delhi-NCR. In January, it had also launched ‘Ola Corporate’ to offer seamless mobility experience to corporate travellers across all major Indian metros. This service enables customers to hail cabs when required and pay from their company’s centralised pre-paid account.

However, both the aggregators had to face flak in their bid to disrupt the bike-as-a-taxi service market in India. Within a day of their launches, they faced law infringement notice from the Karnataka State Transport Department for violating the Motor Vehicles Act and continuing to operate without requisite permission.