Ola announced the launch of its Android app, Ola Money, on Tuesday which is separate from its Ola app. The app offers peer to peer payments, mobile recharges & postpaid bill payments and works with an ecosystem of merchants.

With Ola Money app, users will more easily be able to check their transaction history. They can also check out deals and offers from partnered merchants which includes Oyo Rooms, Lenskart, Saavn, Zopper, BusIndia and Zoomin. Recently, the app has also listed new merchants including Explara, Healthkart and Planhound.

The login credentials like email address and mobile number are connected to the user’s Ola account. Ola Money can be recharged via credit card, debit card & net banking, and customers can also recharge prepaid mobile numbers and pay postpaid bills.

Currently, the company claims to have a total of 25 Mn customers making 1 Mn daily booking requests on the service. However, the customers seem to be complaining about the app for various reasons as of now, i.e. delays in bill payments, failure in loading promo codes. Ola Money app has an overall rating of 3.3 stars on the app store. 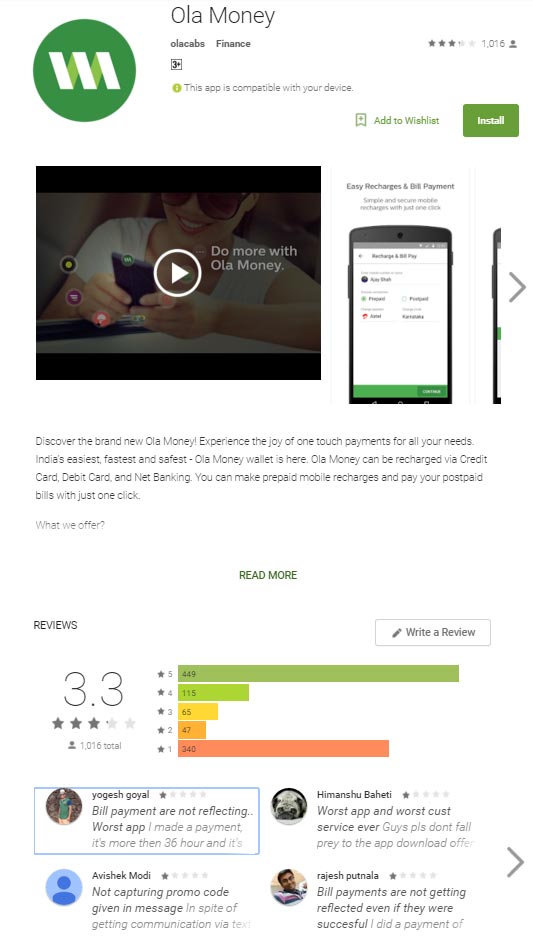 Other players operating in this space including India’s leading mcommerce platform, Paytm, which is doing every bit to offer customers an easy and hassle-free method of payment, and enhancing customer experience. Meanwhile, Freecharge, which had been acquired by Snapdeal, merged their customer accounts to build a common account and common wallet service namely ‘Freecharge Wallet’. In 2013, ecommerce major Flipkart also tried their luck with its wallet service, PayZippy, but had to shut it down in a year as it failed to bring customers on board.