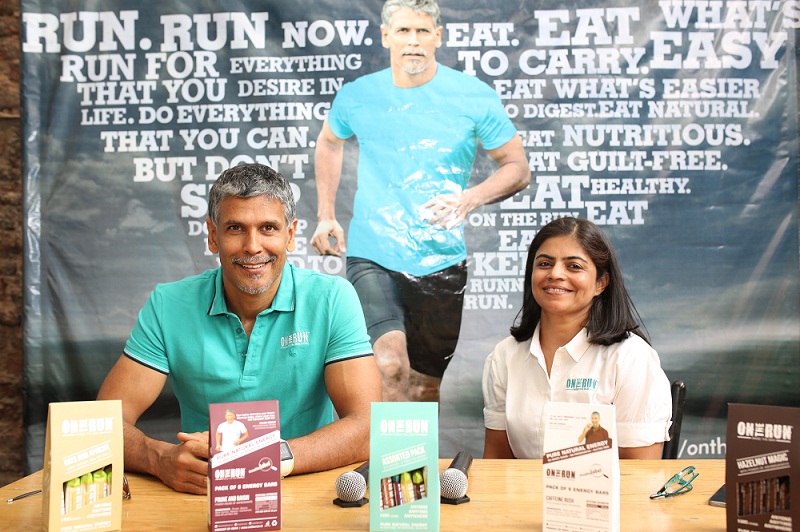 Actor and fitness icon Milind Soman has made his first ever investment foray in the health and wellness sector, with  Stayfit Enterprize Pvt Ltd – a natural health food startup that makes food products under the brand name ONTHERUN. The actor who invested an undisclosed amount in the venture will also be the brand ambassador of the brand going forward.

Founded by Shilpa Phadke in 2014, the startup is also looking to raise $3 Mn-$4.6 Mn (INR20 Cr-INR30 Cr) from angel investors in the next two three years. Currently, ONTHERUN energy bars are available in Pune, Mumbai, Goa, Delhi, and Noida through retail outlets numbering 100 – which include BigBasket, Big Bazaar, and other standalone stores. They are also available online through Amazon. A box of six energy bars is priced at INR 360 and the granola range is priced at INR 300.

Shilpa stated, “The health and the wellness food segment is estimated to be a roughly $5Bn (INR 33,000 Cr) plus market growing at 8% – 10% over the last year. In terms of sales, the market crossed $1.5 Bn (INR10,000 Cr) mark last year. The industry is nascent and scattered and we plan to capture approximately 10% market share in the healthy, on-the-go food category in the next three years.”

Further talking to Inc42, she revealed that Milind’s investment is just the first in the series of investments he will be making in the startup. The startup is aiming to garner revenues of up to $311K (INR 2 Cr) this year and hit the $7.79 Mn (INR 50 Cr) mark in the next five years. With this investment, she plans to extend the category which is currently available in six variants (Fig & Date, Caffeine Rush, Prune & Raisin, Hazelnut Magic, Ginger Crunch, Oats & Apricot) to tow more products in the coming months. Additionally, the startup will look at expanding in the top 12 cities of the country by the year end.

Meanwhile, Milind Soman who has graduated from being a consumer of ONTHERUN products from the prototype stage when he encountered them at a marathon expo in Pune, revealed that he is also looking to make an investment in a health app where consumers can ask him health related queries. He said that while there were many such apps in the market, but none was fronted by a sportsperson.

With this investment, he joins a bevy of celebrities who have invested in startups such as Madhuri Dixit in GOQii, Gul Panang in m-fitness startup Mobiefit, Kunal Kapoor in Ketto, and Salman Khan in Yatra, among others.