Zomato has been blacklisted from the Indian Institutes of Technology (IIT) placements. The decision was taken recently by the All-IITs Placement Committee (AIPC), with at least six IITs i.e. Delhi, Bombay, Kharagpur, Madras, Guwahati and Kanpur, confirming the blacklisting.

The blacklisting comes after a spat between  Zomato and IIT-Delhi over slotting issues in July. The online restaurant guide was denied a day one slot as a recruiter as its salary packages (along with ESOPs) amounting to a total of $39K (INR 26 lakh) was too low. CEO Deepinder Goyal then took to Twitter against his alma mater to vent about the placement scenario, which was one of the major reasons for the ban. He had stated that campus placements in India are broken and that placement cells optimize only for money. The issue was further compounded by Zomato’s highhandedness at other IITs and alleged ego issues.

Atal Ashutosh Agarwal, Vice-President, Technology Students’ Gymkhana at IIT-Kharagpur told ET, “Any company which violates the procedural guidelines laid down by the AIPC may be blacklisted.” Sometimes, in cases of minor infringements, companies may be let off with a warning; in more serious cases, they are blacklisted.  Apparently, students have also been warned against contacting Zomato in any way for hiring. 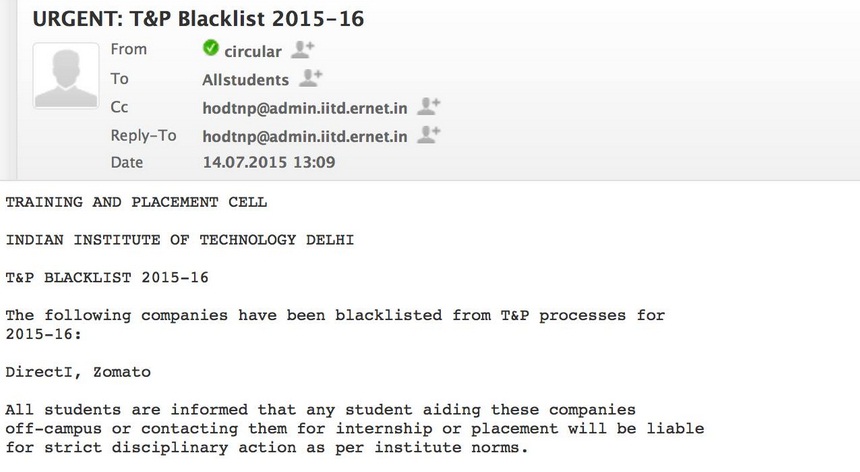 We reached out to Deepinder on the same to which he replied, “The ban is a few months old. And it doesn’t affect us as most people who want to work with us reach out to us anyway.”

Zomato, with a valuation of more than $1 Bn, is not the only startup to be blacklisted due to ego issues over early slots. Similar tensions are also brewing between many other startups and IITs. For instance, Internet products company Directi was blacklisted last year over issues pertaining to placement interviews at IIT Kanpur. As Directi has since then put forward its defence and agreed to make changes at an AIPC meeting in IIT-Guwahati in end-October, the ban might possibly be revoked.

Zomato meanwhile is yet to make its defence or take measures to have the blacklisting revoked, with the final decision resting with IIT-Delhi. Zomato recently laid off about 10% of its 3,000-strong global workforce as it battles revenue crunch, which could also be one of the possible reasons of the ban.