Indian Startups! Here Is Your Chance To Enter French Market

Indian Startups! Here Is Your Chance To Enter French Market

With Indian startups and entrepreneurs making their mark globally, here is a new opportunity to leave their mark in France. The French Government has opened its doors to the global competition, French Tech Season 2.

French Tech Ticket, created in 2013, is the French startup ecosystem initiative that promotes emergence of successful startups accompanied by Business France. It is a programme designed for entrepreneurs from all over the world who want to base their startups in France.

Season one was held last year in Paris. Out of the 722 projects submitted, 23 startup teams from 23 countries were selected. The two startups from India that won were – Dymond Cleantech and Guesswork.

In season two, a total of 70 teams will be selected. They will be hosted in France by 40 incubators for one full year starting January 2017. Each winning team will be awarded $51K (€45,000) in prize money with no loss of equity (€20K to cover personal costs and €25K to cover professional services).

Startups that are currently in growth stage and working in areas including sport, biotech, smart city, ecommerce, agritech, cleantech, robotics, and web/mobile can apply to be part of the programme. Consulting firms and import-export businesses are not eligible to participate.

The participating teams can include a maximum of one French citizen in the team and founders must be ready to live in France for a year and devote 100% of their time to their project.

What The Startups Will Receive: 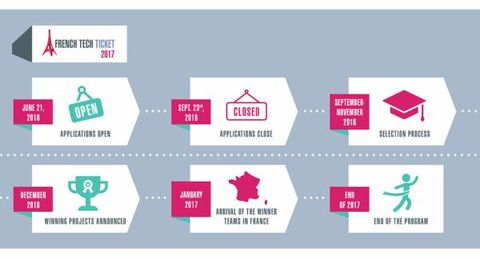 Over the past few years, American tech giants Google, Intel, Cisco, and Facebook amongst others, have chosen France to develop their future technologies.

“Startups will play a key role in driving the next phase of global growth. India is the perfect example where startups have changed the country’s business ecosystem thanks to robust initiatives such as Startup India and Skill India. The French Tech Ticket is a prime opportunity for them to expand their business and access the European market while being immersed in a booming startup ecosystem. France is open to welcoming international talents and helping them achieve their potential.”

The deadline for submitting applications is September 23, 2016. You can apply here.