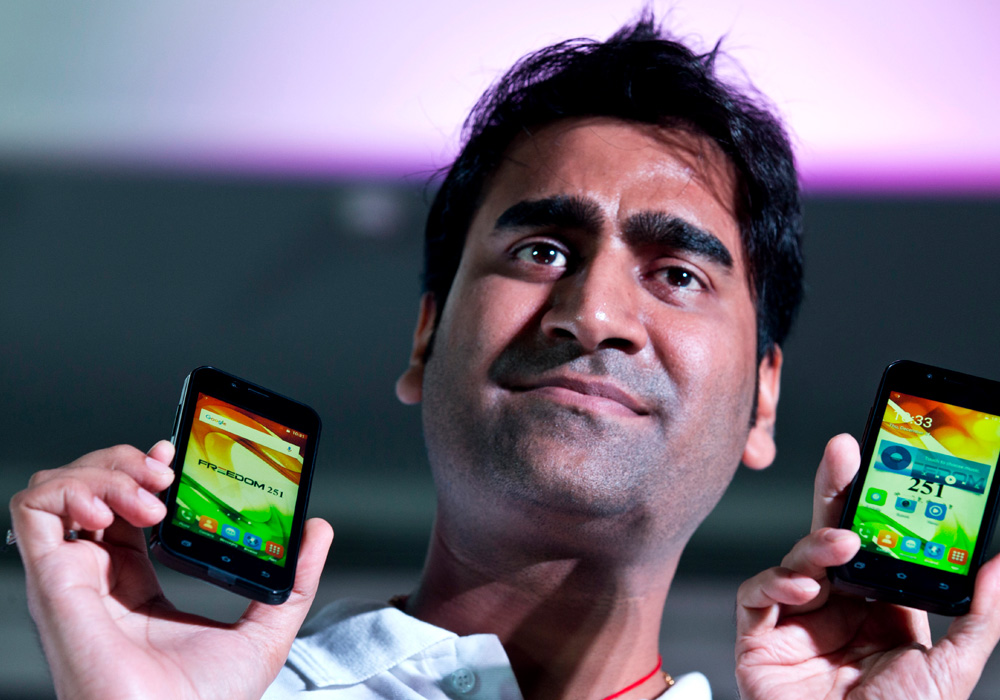 The world’s cheapest smartphone has just turned out to be just that – a cheap fraud. Last week, Mohit Goel, Director of Noida-based Ringing Bells Pvt. Ltd which owns phone brand Freedom 251, was arrested after a FIR was filed by Ghaziabad-based Ayam Enterprises, accusing Ringing Bells of defrauding it to the tune of $23,932 (INR 16 Lakhs). As per an ET report, the search is on for four more directors of the company – Anmol Goel, Dharna Garg (Mohit Goel’s wife), Ashok Chadha, and Sumit Kumar – that launched the world’s cheapest smartphone last year.

In the FIR, Akshay Malhotra, a distributor at Ayam Enterprises claimed that, in November 2015, Mohit Goel and other company officials had persuaded it to take up the distributorship of “Freedom 251” smartphone – expected to cost only INR 251.

Akshay claimed that, after much persuasion, Goel supplied the first consignment of mobile phones worth $11,966 (INR 8 Lakhs), the company was forced to return them as they were found to be of substandard quality. Later, Ayam Enterprises was forced to accept power banks and LFD bulbs in place of mobile phones.

As news of Goel’s arrest emerged, several other distributors have also come forward to describe their plight.

The Saga So Far

In mid-February last year, Ringing Bells had announced grand plans to deliver 2.5 Mn handsets before June 30, 2016. It received over 70 Mn registrations before its payment gateway crashed. However, its promise fell flat as reports surfaced last year in when certain irregularities came to notice – such as accepting pre-booking without having a manufacturing facility. The Enforcement Directorate had subsequently intervened, following which the company was forced to return all the money collected via online bookings and through online payment gateways.

While it faulted on deliveries initially, last July it decided to ship 2 Lakh units, finally. However, only 70,000 units of the smartphone have been delivered until now. The company claims to have sold the phones in states such as West Bengal, Haryana, Himachal Pradesh, Bihar, Uttarakhand, New Delhi, Punjab, J&K, Maharashtra, Madhya Pradesh, Jharkhand, Rajasthan, and Uttar Pradesh.

A report in Business Standard states that the company allegedly procured Taiwan-made phones and distributed them with the Freedom 251 branding.

Meanwhile, more trouble ensued as complaints from dealers who had deposited advances with the company started emerging. In December 2016, a court issued summons to the firm on a complaint filed by Aryan Infratech which stated that an $299K (INR 2 Cr) cheque issued by Ringing Bells in favour of Aryan Infratech had bounced. The complainant firm had sent a legal notice to the accused but no payment was made, forcing the firm to approach the court.

Reports also started surfacing that the owners had shut down the company and opened a new firm, MDM Electronics Private Ltd. These charges were refuted later by Ringing Bells. However, it appears that Mohit has reportedly taken money from several people under the guise of turning them distribution agencies of his smartphone company. Yet after the claimed deliver of 70,000 units so far, no more deliveries have come to light. Also, the company website is not functional, at the time of article publication.

Interestingly, a FIR was also registered against Ringing Bells last March, following a complaint by Bharatiya Janata Party (BJP) leader Kirit Somaiya who levelled serious allegations against the company, claiming it to be a “Ponzi bogus company scam”.

A report by HT stated that Mohit maintained that he was ready to pay back INR 16 Lakhs to Ayam and the distributor was also keen to take back his payments and withdraw the FIR. He added that out of the 110 distributors of the company, nearly 95 have received full payments and the remaining 15 were also paid back nearly 60% of the amount. The balance amount was to be paid by end of March.

As per the latest reports, however, a court in Ghaziabad has struck down grave sections of forgery and criminal conspiracy levelled on Mohit for lack of evidence but has maintained the charges of cheating and criminal breach of trust, as it extended his judicial custody by 14 days.

It is to be noted that Ayam Enterprises does not have a verifiable digital presence and, therefore, could not be contacted to verify its claims.