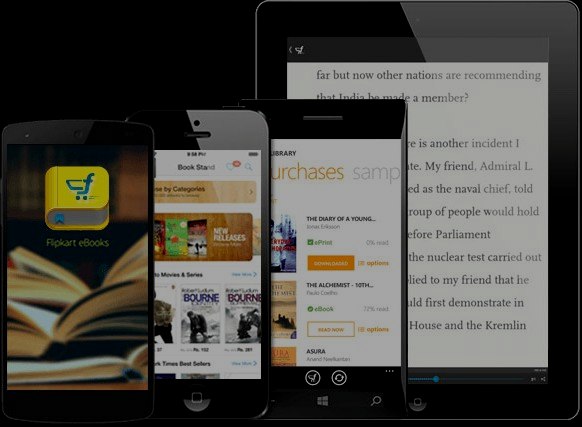 Ecommerce giant Flipkart has discontinued sale of e-books (electronic books). Consumers will not be able to buy e-books on Flipkart, however, their previous purchases will remain intact.

Users who have already made purchases can access those on the Flipkart e-book app or via Kobo, the e-book platform which is owned by Rakuten.

The company said in a statement that “The Indian book market is overwhelmingly dominated by physical books and this is a market that is growing at a fast clip. Flipkart will continue to be a leading player in the overall books market in India. In its overall strategy for books, Flipkart does not see the ebooks service as a strategic fit and hence the decision of transitioning the ebooks service to Kobo.”

Started out as an online retailer of books in 2007, Flipkart, later on added other products such as mobile phones, laptops, clothes and furniture. Until a few years ago, the company was synonymous with buying books online, but of late its focus has moved to higher value categories.

The print book market in India is valued at $3.9 Bn, according to an October report by market researcher Nielsen.

In September this year, speculations were that the company’s association with self-publishing platform Smashwords – a distributor of e-books – had approached its end; Flipkart had entered into a contract with Smashwords in August 2013.

Smashwords had reported in a blog that it had “received word from Flipkart that after careful consideration, Flipkart determined their systems are not yet capable of supporting the dynamic nature of the Smashwords catalogue. As a result, they will begin winding down the relationship with Smashwords and remove our titles”. Flipkart had inked an e-book distribution agreement with Smashwords in 2013 to sell more than 200,000 ebooks through an app under the Flyte brand.

Meanwhile Flipkart’s rival Amazon – which is the leading online book seller in India – recentlyannounced the launch of Kindle Unlimited, a subscription service that allows its users to pick and read books from over a million Kindle books at a monthly fee of $3 (INR 199).