As part of the new YC deal, $375K will be invested in the form of an uncapped SAFE note, which allows Y Combinator to get the best terms on a future funding round

This week, the startup ecosystem around the world was abuzz with discussions around the new $500K standard deal from Y Combinator. The fact that one Silicon Valley investor can thus dominate startup-centric conversation across the world is enough to indicate the power of YC. But the discussions this week have been about whether Y Combinator is abusing its prevalence with the new deal structure.

The famed Silicon Valley accelerator announced that it would be revamping the standard deal it offers to participating startups with $500K on offer up from $150K, but with the twist of an uncapped SAFE note and a contentious most favored nation (MFN) clause.

The fact is that seed stage rounds are getting bigger and bigger over the past couple of years.

In India, the average ticket size for seed-stage deals in 2021 was $2 Mn and seed stage funding crossed the $1Bn mark for the first time ever, with a record 706 deals. It is not unsurprising then that YC decided to increase the amount it invests in startups. But it’s the terms of the deals that grate many early investors.

Here’s how YC will now invest: The $500K will be invested in two ways:

SAFE (or simple agreement for future equity) note is recognition of an investment into a business that will allow the investor to convert the note into shares in a future priced round. It is not a debt instrument but is intended to be an alternative to a convertible note which does not accrue interest, and allows founders and investors to defer critical and painstaking discussions of valuation to the next round of funding, while expediting investments.

But YC’s deal involves an uncapped note. This means that there is no defined maximum price at which the $375K SAFE will convert to shares. This is in contrast to the earlier SAFE note that YC used to offer to its startups which had a $10 Mn cap.

What Is Y Combinator’s MFN Clause?

Most favored nation (MFN) clause means that Y Combinator gets the best possible deal in any future priced round, or in other words as good as any other investor in a later conversion. This is the part that has alarmed some investors and founders the most.

One investor told me, “It feels like more money for founders, but they are potentially giving up a lot more equity. Earlier it used to be 7% dilution which had enough headroom for incoming investors post YC demo day. With the new top-up uncapped notes for $375K, only the startups with momentum will thrive.” 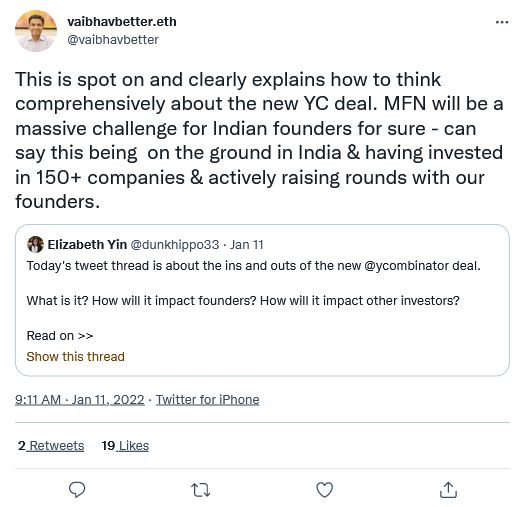 There’s little doubt about how influential YC is in the tech industry around the world. Startup founders such as YC alumni Mixpanel cofounder Suhail Doshi pointed out that entrepreneurs never forget who broke them into the industry, and that is part of the reason why YC commands the respect it does. 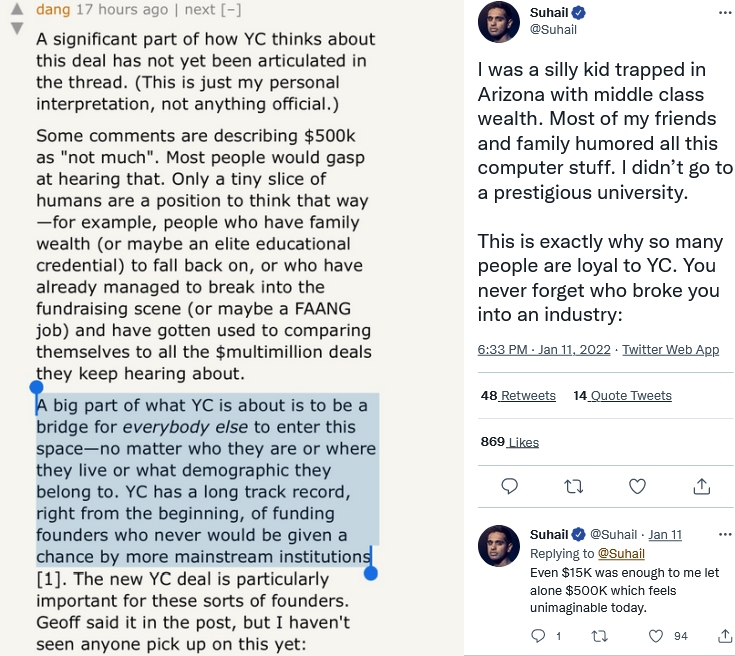 But there have also been questions on whether this is the case of the accelerator squeezing out other early stage investors. The MFN clause in particular is contentious for some early stage investors that we spoke to, as well as in social media discussions — Hustle Fund GP Elizabeth Lin’s tweet thread for instance: 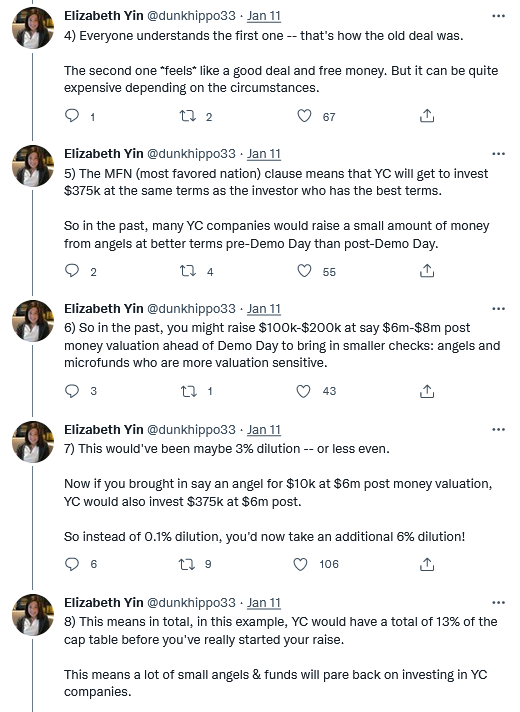 What It Means For Startup Founders

The MFN terms particularly complicate the deals that founders strike with strategic investors who typically command premium equity, or sweetheart deals that involve friends and family, who might get better terms.

Founders would have to allocate YC a portion of the round that would have otherwise gone to seed investors or micro VC funds leading the next round. That’s only if the founders manage to raise a significant amount for their startups at a high valuation in future rounds to accommodate YC without severe equity dilution.

The new deal is good for hot companies raising at high valuations, but it’s definitely bad for companies that are still figuring out the product-market fit and raising at low valuations to extend their runway. But if a startup is hot, would the founders rather give a bigger piece to YC or bring on new investors who might add more strategic value or commit more time to the startup?

Of course, there have been offbeat takes on the deal too. Some say the deal will be beneficial to those startups that don’t raise any more funding beyond the $500K from YC. Others joked that founders with a great application and no intention of building a business might just take the $500K and abscond.

Under the new deal, early-stage founders will be forced to tear focus away from product development, team building and revenue at a critical early stage. Instead, they would have to spend significant time managing cap table issues. Sure, startup founders need to jump into these aspects every now and then, but it does complicate what used to be a simple deal earlier.

What It Means For Seed Investors

In effect, angel investors will be pushed out of deals as YC gets much better terms due to the MFN. Smaller seed funds and angel networks look at collaborative deals in early stages to prevent over dilution, but claim YC is effectively bullying its way into the deal, to squeeze out others that would have otherwise occupied this portion of the deal.

The uncapped SAFE note means the investment will convert at whatever the valuation is in the startup next priced round. Uncapped means there’s no ceiling on how high that valuation can be.

“The signalling is clear YC wants to own the largest piece of equity with every startup they invest in and angel investors, micro VCs are not welcomed. Going to YC for Indian startups is no longer attractive with new terms,” Sanjay Mehta, founder and partner at 100X.VC and early investor in OYO, CoinDCX, Loginext and others, told Inc42.

Y Combinator typically builds a very large cohort, so it stands to reason that only a selected few will flourish with the said new terms. In fact, in an interview in December 2021, YC president Geoff Ralston said that he could see a day when YC batches will have 1000 startups. It’s last two batches had over 320 startups each, so it’s not a far-fetched goal.

What is unsaid is of course not all of these startups will succeed. Many might not even raise a second round after YC, while others might peter out after or shut shop due to various reasons.

Y Combinator is betting that a few of these $500K bets would pay off in the same manner as former YC graduates Airbnb, Doordash, Coinbase, Gitlab, Dropbox and other tech giants. But it also knows that many of the startups won’t make it big. Yet it’s asking for a big piece from all accelerated startups.

Then there is the possibility of a pivot after coming through YC, in which case, Y Combinator would still command a significant equity in a company which has possibly changed its entire business model or product since graduating from the accelerator. Whether such a premium is justified in this case is also being questioned by some investors.

Take the case of KiranaKart which pivoted from digitising grocery stores to become Zepto, which is today valued at $570 Mn. In that case, Y Combinator backed a B2B idea, whereas Zepto is now a B2C quick commerce company.

Not The Same Ol’ YC

In recent years, Y Combinator has become one of the major sources of early stage funding for Indian startups. While the famed Silicon Valley accelerator always had a sprinkling of Indian startups in its biannual list for the past several years, in the recent past, YC’s focus on India has increased significantly.

In its previous four batches (Winter 2020, Summer 2020, Winter 2021, and Summer 2021), YC selected 24, 12, 43 and 38 Indian startups for its accelerator program. The biggest factor behind the higher number of Indian startups in YC’s batches is the virtual nature of the programme since 2020, which includes the application process, accelerator program and the demo day.

Besides this, the success of YC graduates such as Meesho, Groww, Clear (Cleartax), OKCredit, Khatabook, Razorpay, Zepto (KiranaKart) and others has also prompted more founders to apply for the accelerator program and learn from the experiences of the founders that have come through Y Combinator.

Investors such as Mehta believe that Y Combinator no longer holds the attraction that it did a few years ago for Indian startups or even others from South and Southeast Asia. There may be a point, given the surge in the investor pool in 2021 and the launch of 62 new funds with a total corpus of $6.2 Bn.

Indian startups are at a disadvantage with the new standard deal. Startups particularly in developing geographies typically raise at lower valuations than US tech companies so will likely see more dilution post YC. So while the new Y Combinator deal looks shiny, it may prove to be a painful pound of flesh for many young startups.