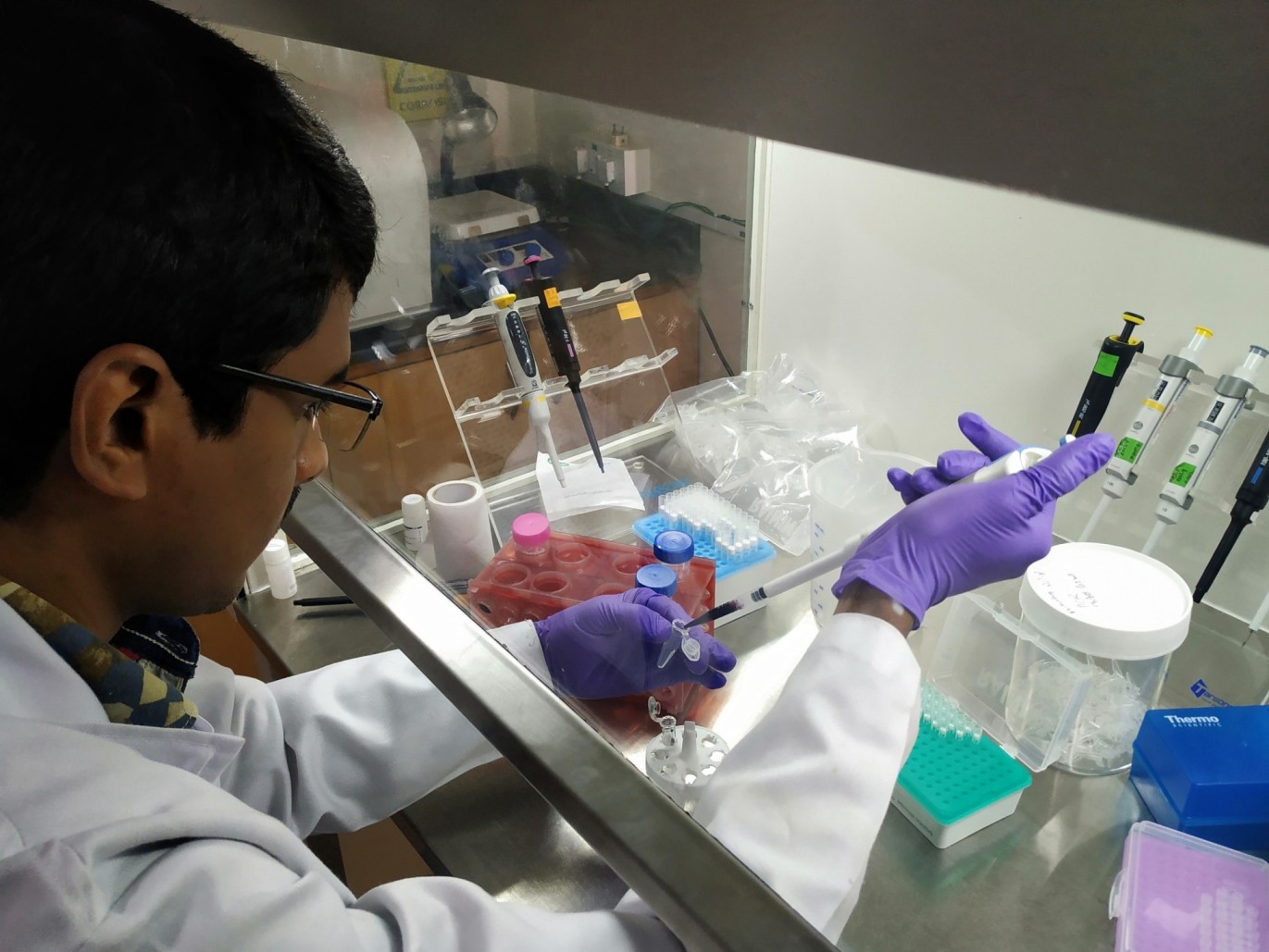 According to the Indian Council of Medical Research, cancer claimed over 7.8 lakh lives in India in 2018

In India, several healthtech startups are using novel methods and emerging technologies in the battle against cancer

Cancer. It’s a single word but loaded with so much more. From the early pains to the journey of fighting the disease and the resultant trauma and the battle for survival — cancer is as tough as it gets and given that there are so many different types of cancers, the medical battle against cancer is just as difficult.

Despite medical technology advancing greatly in the last decade and before it, cancer remains one of the biggest battles for the medical fraternity, alongside HIV.

The World Health Organisation (WHO) warns that, if current trends continue, the world will see a 60% increase in cancer cases over the next two decades and that the greatest increase in new cases will occur in low- and middle-income countries, where survival rates are currently lowest.

“At least 7 million lives could be saved over the next decade, by identifying the most appropriate science for each country situation, by basing strong cancer responses on universal health coverage, and by mobilizing different stakeholders to work together”, said Dr. Tedros Adhanom Ghebreyesus, Director-General, WHO.

In India, between 1990 and 2016, the number of cancer deaths increased by 112% and the disease incidence increased by 48.7%. According to the Indian Council of Medical Research (ICMR), cancer claimed over 7.8 Lakh lives in India in 2018. Breast, cervical, oral and lung cancers together constitute 41% of the cancer burden.

A study in Lancet stated that India, with over 1.3 Bn people and 4,000 anthropologically distinct groups, needs to expedite genomic studies to identify country-specific genetic biomarkers and needs to create cancer prevention strategies.

The paper further suggested parallels among women cancer patients in Punjab and the Punjabi-origin Indian diaspora in the UK. “This might offer a unique opportunity to study the genetic and environmental influences on cancer development in genetically related populations that have been subjected to different environmental factors.”

Delving into the aspect of technology and its role in cancer treatment and management, Samara Mahindra, CEO and founder of Carer, told Inc42, “Technology has allowed people to expand their knowledge about cancer and the perception of it. While we in India have a long way to go, people are much more aware of screening mechanisms, cancer precautions that need to be taken and instant access to medical information and care at their fingertips. Cancer is no longer being looked at as a stigmatised word but one which is complex, however manageable.”

According to the World Health Organisation, nearly half of all cancers can be prevented by reducing known risk factors. Thereby putting emphasis on the detection and prevention stage of the disease. While the number of cancer cases increased, so did the human curiosity and inquisitiveness to combat this challenging disease. Technological innovation and disruptions took place in cancer detection, treatment, and research areas over the years.

Rashie Jain, founder of Onco, an online platform that connects cancer patients to oncologists across the world for advice on treatment and management, also believes that technology is playing a vital role in breaking the taboo associated with the term cancer.

“In this connected world, patients and families are getting more and more informed about new advancements in treatment options in the field of healthcare, building more confidence in people. The reach of technology is making it possible to not only be informed about the disease and all its aspects, but also get connected with other patients and survivors, and gain first-hand knowledge on dealing with cancer,” she told us.

The State Of Cancer Care In India

Several studies reflect numbers that factually support the manifold increase in the number of cancer cases in India. The rising number of cancer cases can be attributed to various reasons. However, a study — History of the Growing Burden of Cancer in India: From Antiquity to the 21st Century — by Mohandas K Mallath and Robert Smith found that it’s not the change in lifestyle but ageing that drives the increase in cancer incidence. With more people living longer, the incidence of cancer is bound to increase in a society, he stated.

The report found a correlation in the increase in cancer cases with the increase in the life expectancy of Indians. While big epidemics and infectious diseases have started to recede with modern medicine, more people living to an older age has increased the cancer risk. According to the study, as India continues to age, cancer cases will double every 20 years.

According to Dr Manjiri Bakre, CEO and founder of OncoStem Diagnostics, cancer has been a disease with the highest mortality rate after cardiac disease in India. She said that the Indian Council of Medical Research has also pointed at incidence doubling in the next 20 years. “This increased incidence can be associated with the deteriorating lifestyle of individuals coupled with heavy pollution and rampant food adulteration besides genetics. The silver lining in all this is the emergence of technology in various aspects of healthcare including cancer care which is helping reduce the negative impact of this dreaded disease on the patient.”

Is Tech The Answer For Cancer Care?

The fact is that unlike other diseases, cancer needs to be tackled at various stages — primarily due to detection gaps. But beyond detection, care is needed at various levels from treatment to post-operative care, chemotherapy, mental counselling and cure research.

While tech-based health startups such as OncoStem, AINDRA, NIRAMAI, and Integrated Wizards Solutions work in the sphere of early detection, Zumutor Biologics works in the sphere of developing novel treatments for cancer that seek to attack the core of the disease.

On the other hand, Onco, which was one of the healthtech startups selected in the Inc42 Startup Watchlist this year, focusses on connecting patients with the right doctors and treatments while Carer and Portea operate in the space of patient care and telemedicine.

“Cancer detection is mostly based on visual analysis of radiological images by radiologists. The use of AI-based tools can help the radiologist by marking suspicious lesions on the medical images in a different colour, analysing the lesions and showing scores that give the likelihood of malignancy, etc. It not only reduces radiologist’s time but also makes it possible to detect small lesions that may be missed due in complex images. The use of AI in radiology is becoming an accepted modality in cancer detection today,” Dr. Geetha Manjunath, founder, CEO and CTO, NIRAMAI told Inc42.

Niramai’s Thermalytix platform detects breast cancer at a much earlier stage than traditional methods or self-examination thanks to patented thermal image processing and machine learning algorithms.

There are other startups using different ways to arrive at the same destination. AINDRA, an oncology startup in the space of early-detection, uses computational pathology tools. The platform provides a point-of-care detection system for cervical cancer which is said to be quick, affordable and accessible. The company plans to extend its reach by working similarly for other types of cancers.

CEO Adarsh Natarajan told Inc42, “Given the hype that technologies like AI and CRISPR have generated over the last couple of years, we see an increased awareness of the potential these technologies hold in the domain of oncology. This awareness has resulted in a more easier adoption cycle for products that use this technology and solve the problem effectively.”

Natarajan added that it’s not all good though. “This hype and perception have both positive and negative connotations. The excessive hype has the danger of creating abnormal expectations in the mind of the people and therefore runs the risk of a backlash when those expectations fail to get materialised.”

As for challenges in the area of finding novel cures for the disease, Zumutor Biologics cofounder and CEO Kavitha Iyer Rodrigues told us,

“We have moved significantly in gaining access to therapy options. The opportunities in the sector for therapies are many and bridging the gap between global and local access. The challenges have always been access to capital, growth funds and speed to approval in the domain of drug development.”

Going Beyond Cancer Detection And Cure

Of course, very few patients are fortunate enough to have cancer detected early and get the right treatment. There has not been as much focus from the startup ecosystem on post-treatment care of cancer patients in India.

Meena Ganesh, MD, and CEO of Portea Medical told us that despite technology becoming an enabler in the timely diagnosis of health conditions like cancer, there is no holistic approach towards its prevention and treatment in India currently. “A cancer diagnosis often leaves a person devastated. In case symptoms are detected and the doctor requests screening, people often shift to another specialist. However, it is not just the fear of invasive treatment, disfigurement or the financial burden. The misplaced belief that death will be the ultimate outcome for a cancer patient often makes families opt out of specialised treatment.”

Ganesh further added that under such circumstances people may turn to alternative systems of medicine and fall prey to non-scientific home remedies in the hope of finding a cure. Thereby emphasising on the need for a well-planned treatment pathway — prevention to early detection and complete treatment along with the availability, affordability, and accessibility of the same.

Carer founder Mahindra said the startup focusses on nutrition, medication and mental well-being adds to the thought. “Creating a robust technology-driven health tech landscape that accurately and rapidly screens, diagnoses and treats cancer is the goal and many companies are building platforms and systems for the same, trying to fit correctly into this spectrum of care. The challenges are the adaptability to technology in a very traditional human-driven intervention and the affordability,” the founder told us.

Thus, all Indian states are experiencing an increase in cancer and other noncommunicable diseases.

It further states that India’s cancer burden will continue to increase as a result of the continuing epidemiological transition. Maximum increases will occur in the most populous and least developed states, where the current cancer treatment facilities are grossly inadequate.

While Onco’s Jain strongly believes that early detection is the answer and that increased awareness around the importance of screening tests including mammograms and colonoscopies can help, AINDRA’s Natarajan told Inc42, “Our own understanding of all the causative factors for all kinds of cancers is still limited and therefore our response to dealing with this is also consequently limited. To be able to effectively deal with this growing problem, a focused approach at a country level with investments to spur research and innovation is absolutely required to be able to build an effective response to cancer.”

“There is a need to look at healthcare in a comprehensive manner going beyond just a curative approach. Most ailments that are crippling our nation today are to a great extent preventable in nature – be it diabetes, heart disease or cancer. The need of the hour is thus to focus on strategies around harm reduction,” said Portea’s Ganesh.

She added that the future of this battle will be between individuals, their lifestyle, and preventive approaches. It must be ingrained in every citizen that only early and timely screening can ensure control and treatment at the appropriate time and prevent mortality. The alarming rate at which cancer has spread across the country initiates a call for action and awareness at the earliest.