According to April data from RBI, the volume and value of credit card transactions in the country stood at 15.8 Cr and INR 59,150 Cr respectively while NPCI reported 119.2 Cr P2M UPI transactions worth INR 81,836 Cr

In 2016, the unified payment interface (UPI) was launched with the aim to curb the “black money” economy and bring more transactions under the purview of the tax department. This was also the reason that the informal economy, and to a great extent small businesses, wanted to hold on to their cash-ecosystem. The fear of being taxed appeared bigger than the possible convenience the solution had to offer.

With its focus on cleaning up the black economy, the government and the Reserve Bank of India launched the UPI through the National Payments Corporation of India (NPCI) in August 2016. But it struggled with adoption, especially on the person-to-merchant payments (P2M) even if person-to-person (P2P) payments caught on.

Cut to June 2021, the NPCI clocked a record 2.8 Bn transactions, up 10% month on month. It also reported transactions worth INR 5.47 Lakh Cr. The previous best performance, since inception, was in March 2021.

In March 2021, UPI had reported its best-ever figures with 2.73 Bn transactions (20% month on month growth) amounting to INR 5.04 Lakh Cr. To be fair, the lockdowns imposed during the second wave (April onwards) severely impacted payments across the ecosystem as non-essential businesses (we still don’t know the definition of essential) had no business. During May, NPCI reported 2.53 Bn UPI transactions, down 4% month on month compared to 2.64 Bn transactions in April. The value of transactions also registered a marginal decline in May compared to April.

So, yes, in the absence of the second wave, India would probably have reached this mark earlier. But what is driving this growth in transactions? At 2.8 Bn transactions, the average ticket size is somewhere around INR 2,000 which is much more than what people would be paying a single vegetable vendor or sending their friends on a regular basis. Clearly, UPI users are spending more and on different requirements. We spoke to the industry to figure out how the transaction patterns are changing.

Deepak Abbot, fintech expert and cofounder of Indiagold gold loans platform, noted that the high 10% month on month growth in transaction volumes reported in June are not likely to continue in subsequent months but the UPI growth trajectory will continue. He adds that while P2P transactions have comprised a majority of transactions in the past, one can expect that the past few months have triggered the growth of P2M transactions for merchants.

“P2P transaction use cases have been pretty much fixed. But on the P2M side, there is massive scope for growth. On one hand, UPI users are increasingly choosing convenience over the fear of their transactions being recorded. The lockdown has helped retailers adopt this payment option to keep businesses running,” said Abbot.

He added that a lot of solo entrepreneurs and businesses like plumbers, mechanics, utility service providers who may not be registered as merchants are also adopting UPI which is driving the transaction volumes. These are not entrepreneurs or individuals with the capacity to accept card payments. “UPI payments are also increasingly accepted downstream with shopkeepers making vendor payments as well beyond accepting customer payments,” he said. 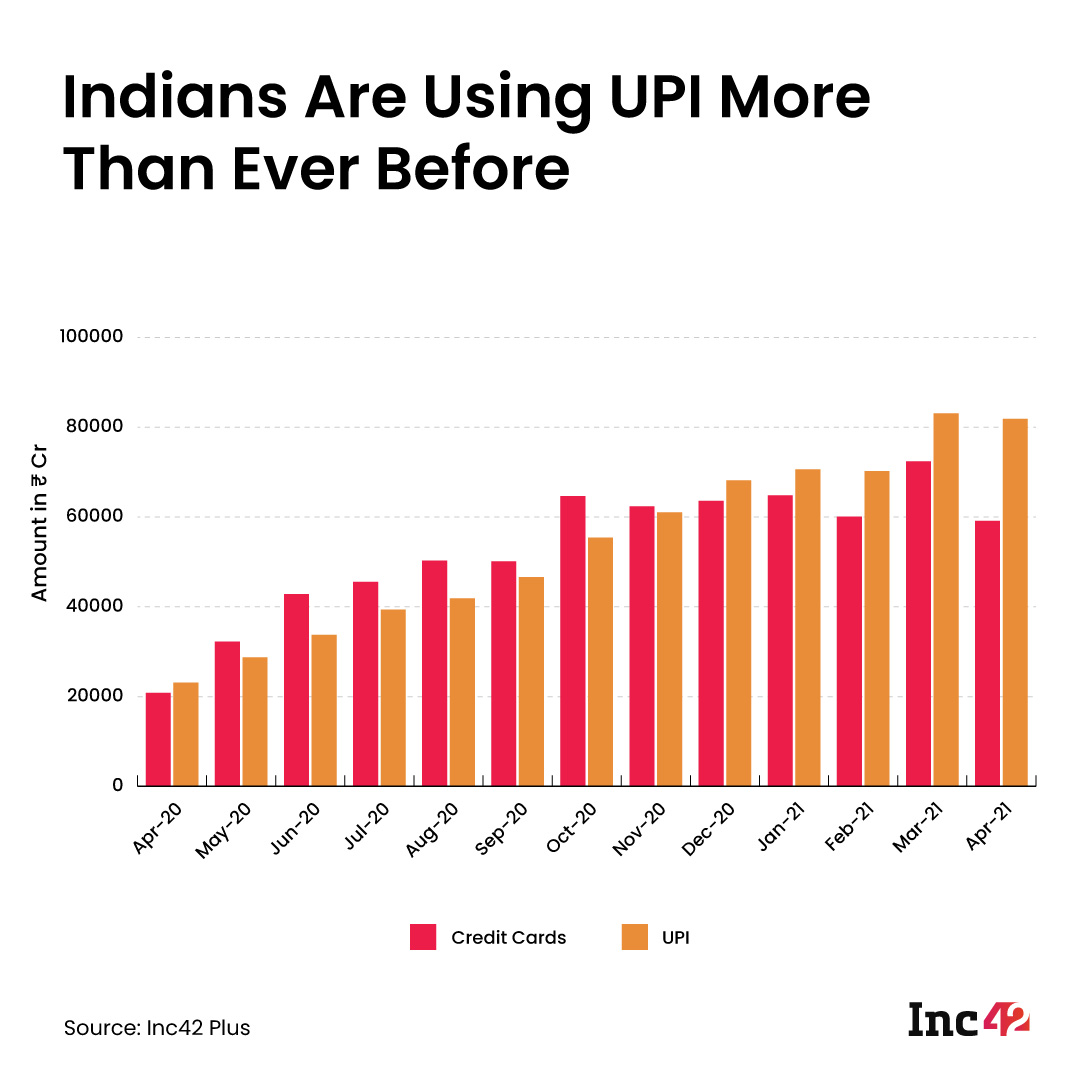 In India, UPI has increasingly become a threat to major card payment solution providers like Visa and Mastercard. UPI service providers like GooglePay, PhonePe, AmazonPay have managed to make inroads to replace cash for a large number of use-cases where cards did not have a presence. Now they are also threatening the credit card turf of the card companies with solutions like auto-debit. UPI-based credit products, however, are yet to find mass adoption.

And these payments are not happening in the top tier 1 and 2 cities alone. Increasingly it is a small-town phenomenon, although rural growth is yet to pick up.

While the first lockdown in 2020 caught many small retailers off guard by the time we walked into the second leg of the lockdown in 2021, many businesses had figured out that having a digital presence is the only way to circumvent the restrictions.

Akanksha Hazari, founder and CEO, LoveLocal which provides digitisation solutions to over 55,000 local retailers across more than 35 cities, said that UPI transactions are increasingly becoming a mainstay across small retailers outside the tier 1 and 2 cities as well. “We have seen an increasing preference for UPI payments not just in tier 1 and tier 2 markets but also in Tier 3-4 markets where customers are using the solution,” said Hazari.

Hazari added that the card ecosystem has always struggled when it comes to tapping payments at these merchant storefronts.

According to payment gateway Razorpay, UPI is driving digital adoption across smaller cities where the pandemic has forced businesses to adopt these digital solutions for survival. Shashank Kumar, cofounder & CTO of Razorpay said that UPI has been a major contributor to this all-time spike, primarily because of its ease of use and ability to carry out transactions fast. And while the April-May period may have been a slight dampener for businesses in general, UPI actually helped.

Tier 2 and 3 cities and towns contribute over 50% of all online transactions on Razorpay. Between March last year and now, sectors such as ecommerce (381%), edTech (311%), gaming (250%) and healthcare (192%) witnessed the highest adoption rate in terms of volume of online transactions.

“It’s interesting to note that from being the second preferred payment method a year ago, UPI is now the favourite of all, overtaking debit & credit cards, netbanking and wallets by a huge margin,” said Kumar.

However, the rural penetration of UPI will take a tad bit longer, experts say. The reason being a lack of enough smartphones in the rural ecosystem and a steeper gender gap in mobile phone access. Unlike in smaller towns and cities, where women have a strong say in household spending as well as access to devices, the rural society is yet to make way for the shift. Additionally, the Jan Dhan Yojna may have exponentially expanded the access to bank accounts across the rural population, it has not effectively given women control over their accounts.

Then there is the entire small and medium business ecosystem which is still concerned about how UPI transactions impact their taxes. A fintech analyst who did not wish to be quoted said that this segment of traders still believed in a cash ecosystem, despite the experience of demonetisation. “Many of these businesses could not have run during the lockdown, even if they had managed to digitise payments and collections, unlike their retail peers,” he said. However, with an increasing part of the retail supply chain shifting to UPI, there is scope for change.