Many founders and experts think that in the next round of appraisals, startups will offer the biggest salary hikes compared to the past four or five years

Lately, the job market has been particularly good for tech talent due to the introduction of the metaverse, data fabric, hyper-automation and other developments

Despite occasional layoffs, talent migration from big enterprises to startups will be quicker now, given the surge in funding, virtual recruitment of global talent and a greater focus on diversity, equity and inclusion (DE&I)

The recent layoffs at Meesho, Unacademy, Trell and many other well-funded Indian startups must have stoked the worry and the anxiety of thousands of employees, even as investors, and the ecosystem, in general, remained strangely silent when heads started rolling.

Breathe easy, if you can.

These end-of-the-(financial)year pink slips handed to hundreds of employees are an aberration, not the norm. According to a cross-section of industry leaders, this cutting back does not necessarily indicate the state of the startup job market.

Inc42 spoke to more than half-a-dozen founders and CEOs across verticals to understand what had triggered these sharp staff cuts. And we could decipher that far from random firing, most new-age tech companies were either scaling up their hiring or had immediate plans to increase the headcount.

Handsome salary hikes were also on the cards. Many companies were set to surprise their people with the biggest pay hikes, and liberal perks would have been there as well.

What Led To The Current Layoffs

A quick look at last year’s data revealed that Indian startups were not only generous with salary hikes but also lavished lucrative perks on their people. But things did not go as planned for some of these companies, and they are compelled to lay off their employees.

For instance, Meesho, the SoftBank-backed social commerce unicorn, recently laid off 150 employees. This was in stark contrast to its people’s policy last year when the company announced a 10-day break as part of its talent retention plan so that its employees could unplug and feel rejuvenated.

The BharatPe saga went along similar lines. Earlier, it had offered BMW bikes, spiffy gadgets and cricket holidays in Dubai. But the fintech major, also a unicorn, is now mired in controversies related to governance issues. Troubled by an uncertain future, more than 400 employees are now looking at job options outside the company.

“An approaching downturn in the record-breaking pace of investment has led to cost-cutting and layoffs at big companies like Unacademy and BharatPe. But renowned founders, recruiting experts and consultants believe that these startups will continue to attract job seekers,” said Peeush Bajpai. He is the founder and CEO of SpringPeople, a certified partner of Google Cloud Platform, IBM and Blockchain Training Alliance, among others, offering training to enterprises and IT professionals.

Analysing the reasons behind recurring layoffs in the startup world, Ankit Oberoi, the founder and CEO of the adtech startup AdPushup, said, “You are raising a lot of money, but your fundamentals are not in place. You are not profitable. Your growth strategy is not sorted. And if you are not able to figure it out in time… if you are not getting the next round of funding, there is no option other than chucking (people) out.”

In the last 2 months, layoffs at Indian startups have impacted over 1,700 employees. 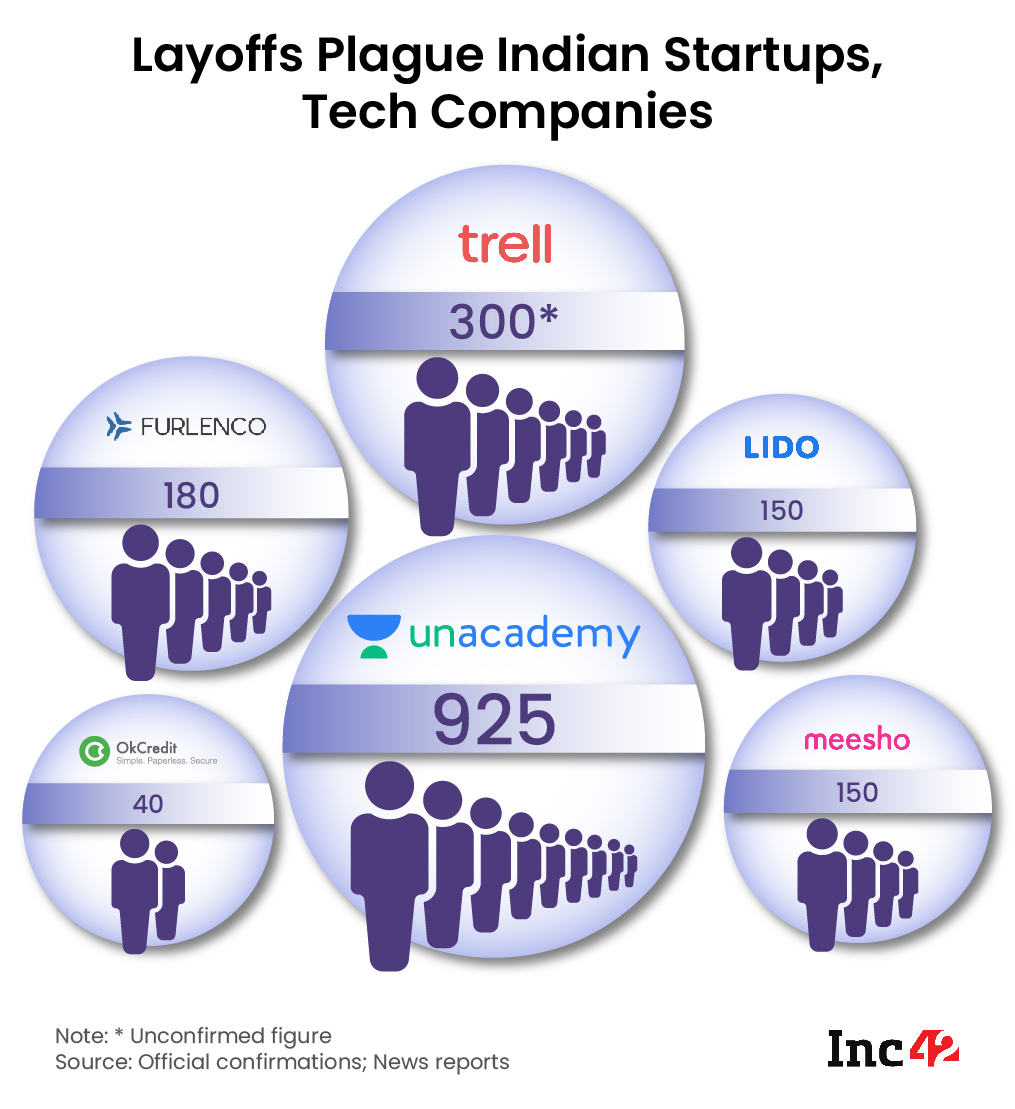 Why Salary Hike Is Not A Big Surprise Amid Layoffs

Despite shifting strategies and headcount trimming, Bajpai of SpringPeople is confident that startups going neck and neck in a race to onboard tech talent will come up with biggest increments in the next round of appraisals to retain their star performers. Earlier, he was associated with several startups such as Talisma Corp, SpringSource (now Pivotal, Inc.) and Kaseya, Inc., which enabled him to study the job market and its potential.

Currently, the job market looks especially promising for tech talent due to the introduction of the metaverse, data fabric, hyper-automation and more, thinks Rohan Bhargava, cofounder of CashKaro, a cashback and coupon site backed by Ratan Tata and Kalaari Capital.

Lately, a large number of direct-to-consumer (D2C) startups are also working with these technologies. This is not surprising as the ecommerce space is consumer-centric and constantly leverages cutting-edge developments to create a great customer experience, pointed out Bhargava while stressing that product remains at the core of ecommerce.

Incidentally, CashKaro is planning to double its headcount to 700 this year. The startup began its operations in 2013 and scaled to a team of 350 by 2021. It is now mulling campus hiring to spot fresh talent and has plans for bulk recruitment.

“The size of the D2C market is constantly growing. New players entering this space are well-funded and backed by their investors. So, they can offer loaded packages to the teams they hire,” said Bharat Sethi, founder and CEO of Rage Coffee, a D2C startup.

“For tech/product/design roles, the remuneration has gone up this year, which is a good thing,” said Suumit Shah, the founder and CEO of Dukaan, a DIY platform that helps offline merchants set up their online storefronts.

Explaining why pay packages would get bigger, he said that given the advantage of remote working, talent could be discovered by thousands of global companies, and the best talent would be adequately compensated in a competitive market.

Sethi concurred, saying that remuneration packages would go up as companies would pay people for adeptness in this day and age of specialisation and compartmentalisation. “However, the market keeps correcting itself, and any aberration will be corrected in the coming months.”

Asserting that startups would remain attractive workplaces, Manjeet Singh, cofounder of the healthtech startup FlexifyMe, said that many organisations would be hiring high-performing professionals from this pool of laid-off employees since they could be hired quickly.

“Even in the short term, say, this year, we should expect salaries to go up. However, salary levels should plateau in the medium term and move towards more sustainable levels,” said Parul Jain, head of HR at Fantasy Akhada, a startup in the fantasy sports space.

“While there are layoffs in many startups, plenty of startups are doing exceptionally well and hiring resources often enough. So, I don’t think layoffs at a few startups will matter much,” said Shah of Dukaan.

Better Perks And Benefits On The Cards

Owing to “healthy growth, record spending and a need to retain key performers”, the trend of liberal remuneration packages would continue in the startup universe, said Bajpai of SpringPeople.

Interestingly, startups have been steadily increasing their compensation packages, but employee turnover still remains a concern. These companies are fast realising that even a handsome salary package is not good enough to retain outstanding performers in the current environment. So, startups are now looking beyond compensation, although liberal remuneration packages are not likely to be disturbed.

Bhargava suggested a tried and trusted way of adding value to ensure long-term retention. “At CashKaro, we believe in making our entire team a part of the company’s success by sharing the wealth, and ESOPs are a great way to do just that. Half the CashKaro team holds ESOPs, and this policy won’t be changed any time soon,” he added.

Shah of Dukaan had a similar view. “Our current ESOP structure provides significant wealth creation opportunities for those who are with us for the long term and are adding exceptional value to the company’s overall growth,” he said.

For many startups, a massive churn could be coming up soon, and it would primarily involve those hired during the pandemic, said Oberoi of AdPushup. According to him, the impersonal relationship and the remote culture minus any personal interaction during the Covid period could be responsible.

A team cannot be built through camera interactions and this is one reason why employees recruited during the Covid years are not sticking with their new employers, he said.

“Retain more=need to hire less,” tweeted Snapdeal cofounder and CEO Kunal Bahl, pointing out that the median tenure at the company is 6.4 years.

Indian startups are further adopting fresh and innovative ways to attract and retain top talent. These vary from generous compensation packages to building an employee-focussed culture.

“Talking about retaining our team, I would like to say more than 50% of the CashKaro workforce has ESOPs, and that has worked as a great retention factor as the majority of the founding team is still with us,” said Bhargava.

AdPushup pays 20-30% over and above the CTC for training, certification and more. In fact, there would be no budget cap on training, said Oberoi, adding that the company never lost its senior leadership.

Overall, in 2022, we have already seen ESOP buyback worth $83 Mn being reported by Indian startups. 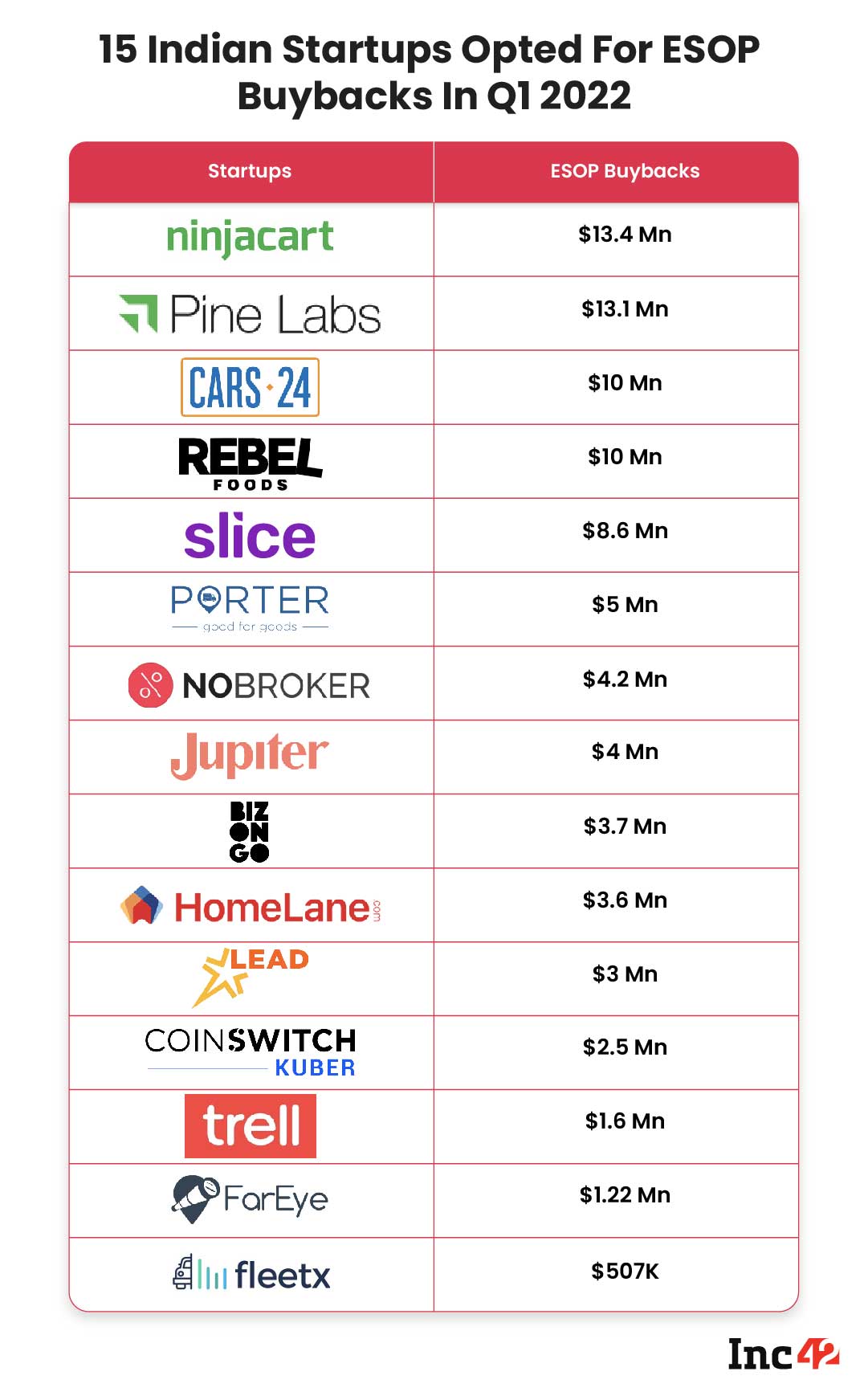 Apart from layoffs and attrition, the startup world faces another stumbling block that can easily cripple its growth. Most companies are staring at a huge talent deficit even though investors are willing to bet big on them (startup funding stood at $11.3 Bn between January and March 2022). Many of them are considering ESOP to attract, engage and retain talent. Since ESOP fosters accountability on both sides, it can be the strategic mechanism to build cohesion and create shared wealth.

Sethi of Rage Coffee thinks otherwise. According to him, ESOPs are just the upper crust of the incentives many brands use to retain their best employees. “These are extraneous endeavours, but the real element for retention is more organic.”

Despite the intermittent layoffs by new-age tech companies, there is yet another heartening trend: Tech employees are leaving their corporate jobs and moving to startups. Talent migration from established enterprises in the IT, telecom and other tech-driven sectors to startups seems to be picking up the pace now.

“The last employee I hired used to work for Accenture. Intelligent and hardworking folks are moving from MNCs and big companies to startups due to the high salaries and the learning curve on offer,” said Shah of Dukaan.

According to Bajpai, certain factors are driving this trend, including slow career progression, fewer opportunities to take ownership at work and the lack of work-life balance that deters people from pursuing their interests outside of work. “In contrast, startups offer better learning, more intellectual stimulation and faster execution of ideas,” he said.

Talent migration would be quicker in the coming days as massive investments are coming to Indian startups, said Shah, adding that “talent follows wealth and wealth creates more wealth”.

How Startups Have Changed Hiring Norms

Talent acquisition models and hiring practices have undergone a sea change during the pandemic years. Changes that would have taken years to implement in normal times happened in months, necessitated by the unprecedented global crisis.

While virtual recruitments will continue to happen, companies also prioritise internal recruitment where positions are filled from the existing workforce. In addition, there would be a greater focus on diversity, equity and inclusion (DE&I), said Bajpai.

“At times, we will create amazing threads on Twitter to attract smart tech talent. At other times, we will come up with exceptional events like intern hiring in 10 minutes,” said Shah. “If you have enough capital, all the smart talent will eventually consider working with you.”

CashKaro mainly focusses on attracting fresh talent, among other things. According to Bhargava, learning is one of its core values, and the company is confident that its training programmes and cross-divisional opportunities will work well. “While merit is a great factor in hiring, acumen, work ethic and other such attributes are equally important,” he added.

Even high-growth, high-burn and quick-fix-by-layoff companies will have to turn to talent hunting and retention if long-term value is to be accreted.