Why Netflix Is Failing In India? The Reason Is More Than Just Its Pricing

Why Netflix Is Failing In India? The Reason Is More Than Just Its Pricing

Recently, Netflix had lowered its subscription prices across all its plans on December 13, 2021, bringing its lowest plan at INR 149 per month -- but it is still not enough

While Netflix is focussing on newer content, programming partnerships and localisation, the pain points of the market are evident — especially indigenisation; it also lacks the additional benefits that come with two of its largest competitors (ad-supported free content and add-on service)

With as solid a foundation as Netflix has in countries such as the US and the UK, one was sure to assume that the streaming platform was guaranteed success in India; so what went wrong with the company's playbook?

Last week, in its post-result webcast, Netflix CXO’s discussed the financial performance of the FAANG major. During the webcast, the team admitted that they were slightly stumped by the Indian market and are still learning and figuring out the right market fit.

Netflix co-CEO and cofounder Reed Hastings said, “The thing that frustrates us is why we haven’t been as successful in India, but we are definitely leaning in there.”

While the quote had been possibly made on a lighter-tone, it has erupted discussion among Indians, as to why the company has been “unsuccessful” in India. In fact, the thing that frustrates Indian users, on the other hand, is that while Netflix is focussing on newer content, programming partnerships and localisation, the pain points of the market are evident — especially indigenisation.

With as solid a foundation as Netflix has, one was sure to assume that the streaming platform was guaranteed success in India. However, just over 6 Mn users in more than half a decade’s presence in the country, give away the situation Netflix is in.

The Price Discussion — Is Netflix Targetting The Right Bharat?

So far, Netflix has maintained its stance of being a flagship service – bringing the cost to an exorbitant level. Netflix’s cheapest plan at INR 149 per month allows only one user account, on only one device, either a mobile or a tablet. And with the INR 649 per month premium plan, it offers 4K streaming across four concurrent streams.

Without context, these numbers seem okay, even reasonable to an extent. After all, Netflix offers the cheapest service in India, compared to its foreign pricing [$10-20 (INR 750 – INR 1500) in the US and £6 – £14 (INR 600 – INR 1400) in the UK]. However, when we take certain macroeconomic metrics into context, we can see why Netflix does not appeal to the average Indian as a viable option, even though India is one of the largest content markets in the world.

According to an Azim Premji University’s CSE study, an additional 230 Mn Indians fell below the poverty line in the immediate aftermath of the COVID-19 pandemic. Another harrowing fact is that in India, the economic disparity is incredible — the richest 100 Indians hold as much wealth as the bottom 550 Mn.

However, this is not the India Netflix wants to target. Given that India’s average monthly wage stands at a mere INR 32,800, Netflix is just not an option. As things stand, even though Netflix might feel hard done by, it has to rehash its pricing strategy — to come closer to the cable cost at an average INR 300 – INR 350 per month, compared to the US’ average monthly cost of $64.41 (INR 4,830).

While the above information makes it abundantly clear that India is a price-sensitive country, where users demand value for money, it’s not essentially looking for ‘free’. In 2021, India evolved beyond a price-sensitive market, and more consumers opted for paid content. This was underlined by the 55-60% year-on-year SVoD (subscription-based video on demand) surge in 2020, with more than half the new users expected to continue the service/s, said a BCG-CII annual M&E report.

So what stops Netflix from becoming ‘successful’? 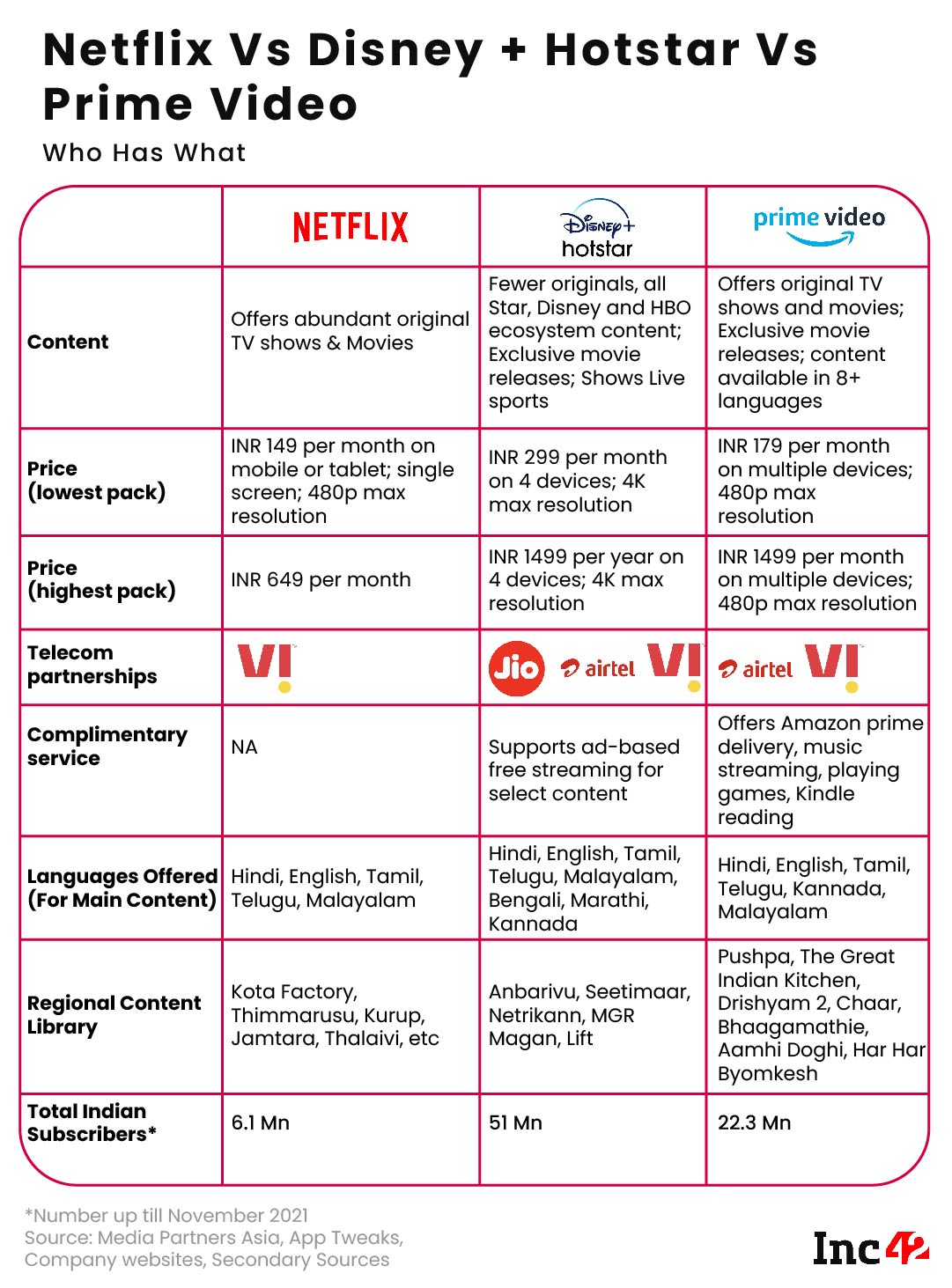 Interestingly, given that Netflix stands head and shoulders above other OTT platforms in India in terms of pricing, it does not offer anything extra. Its competitors, though, are not making the same mistake as it is.

On the other hand, Disney+Hotstar has partnership deals with TV broadcasters, and has the rights to stream multiple Indian channels, alongside the entire Disney+ library and the HBO library. What’s more, Disney+Hotstar has the rights to the English Premier League, and the IPL, two of the most-watched sporting events in India — IPL 2020 reportedly brought in 7.2 Mn views for Hotstar on Day 1 alone.

Further, both of them also have bundle deals with all three of India’s telcos, making them far more accessible to the users. Disney+Hotstar offers bundle deals in form of prepaid recharges from Reliance Jio, Bharti Airtel, and Vodafone Idea and Amazon Prime also offers similar recharges with Jio and Airtel. On the other hand, Netflix is only available through Vodafone’s postpaid plan worth INR 1,099 and beyond.

Netflix, which has spent approximately $3 Bn on original and licensed local content, has adopted the same playbook it uses in the US and other countries — it partnered with Indian studios to add local content but splurged money on pushing ‘foreign’ original content on Indians. One of the more frustrating things about Netflix is its lack of localisation in the Indian market. Sure, it bundles deals with multiple Indian production houses and has generated India-original content, but it is just not enough. Netflix keeps its focus on newer content, which is a good thing, but it lacks indigenisation.

And when Netflix has portrayed Indian content in its own flavour, poor reviews through conservative groups who eyeballed a few elements of India-specific content pieces such as Sacred Games, Suitable Boy or Leila, blamed the OTT giant of being politically motivated, initiating an attack on Indian culture or considering India a third world country. While the scenario of Indian cinema, too, is changing, Indians consider video content as a source of entertainment, rather than a moral policing brigade.

Again, moral policing is not limited to Netflix, but the startup has been evidently creating localisation based on a generic Indian perception. On the other hand, one of Netflix’s major competitors Amazon Prime Video offers a staggeringly wide range of programming in six Indian languages and dubbing in over 10 languages.

Its action-drama, Family Man, was the most-watched Hindi streaming show last year. Its rural gangland drama, Mirzapur, has been a nationwide hit. While some elements of the two shows were controversial, besides being entertainment-focussed, Prime Video also offers content that talks about generally unconventional and comfortable topics — examples include Made In Heaven, Four More Shots Please, among others.

Of the top 20 most searched movies and TV shows on Google, Netflix and Disney+Hotstar both owned the rights for eight content pieces each, Netflix said in its financial statements. But, here’s where Netflix’s strategy set behind Hotstar — India is a cinema-first market, especially vernacular and Bollywood. In this, Disney+Hotstar was a lead, launching movies that couldn’t make it to the big screen due to the pandemic in the country.

Netflix, here, needs to understand that putting a bracket on content for Indians, such as love triangles, explicitness, nudity, and not generalising ‘masala’ content (while may look hygienic), is not the right content approach. To serve the next 100 Mn Indians, Netflix needs to be a comfortable space for ‘non-elite’, who want to wind up the weekend by watching something that can be consumed quickly.

Further, according to experts, growth in the OTT market (in India especially) will be fueled by the demand for content localisation via appropriate cultural references and vernacular content in local languages. This can be met through services such as dubbing, subtitling, translation and audio descriptions.

While Netflix is working on dubbing content for Indian users, other platforms (especially Amazon Prime Video) are looking to add local content to the mix. In the same line, Netflix also faces competition from regional OTT players such as STAGE, YuppTV, Viu, Addatimes, MXPlayer among others.

Thus, looking at the variety offered by the Indian streaming apps, again, localisation of content is not only limited to language change, but an entire cultural shift i.e. representation of relatable characters, dimensions and narratives. 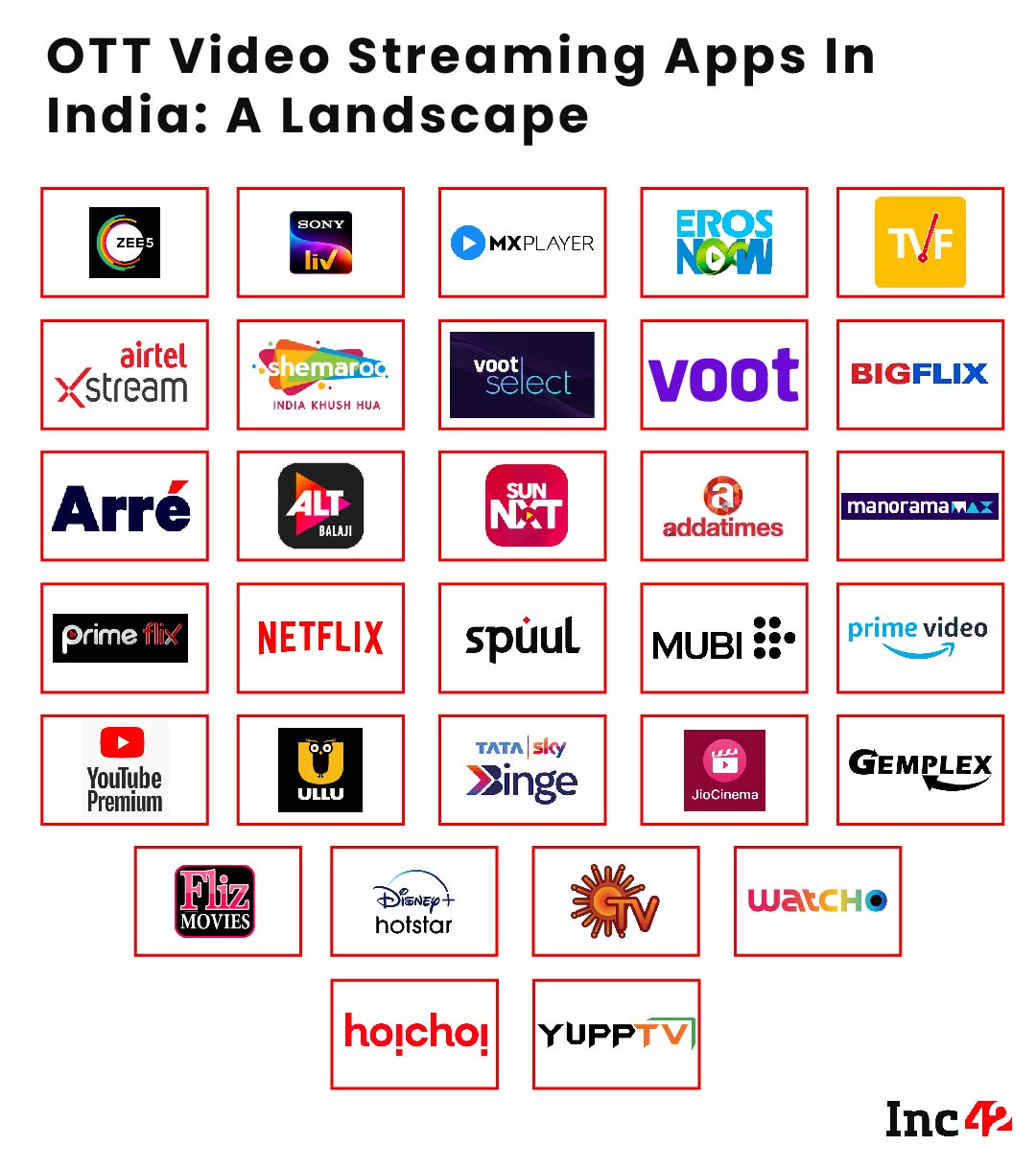 Off-topic, Telegram has fast become one of the largest communications platforms, because of some of the features that give it an edge over the likes of WhatsApp. One of these features includes the ability to send files up to 2 GB in size to an end-user and the ability to create channels.

This has resulted in rampant piracy on the platform, where pirates usually create Telegram channels and upload all of the shows, and it has become a popular method of “streaming” shows in India.

While it is highly unethical to pirate content, Indians essentially want to keep up with the fad without cutting their pockets. In that sense, Telegram provides a better option for users to abstain from FOMO (fear of missing out).

Also, while piracy is not limited to Netflix, Indian users still prefer to pay for other OTTs considering the range of bundled services that come with it. Thus, it would be safe to say that if not for piracy of Netflix’s content, the company would not be as ‘successful’ as it is right now.

How Far Behind Is Netflix?

The Corona crisis was undoubtedly the key growth driver in the video OTT space. And, the ground was ready for a leap to the next level, mainly pushed by the internet infrastructure, a growing affinity for vernacular content and the rising popularity of content live streaming.

Inc42’s OTT performance blog from the ‘2021 In Review’ series reveals that Disney+Hotstar was the most downloaded OTT platform among the well-known seven, alongside Netflix, Zee5, Prime Video, Voot, SonyLiv and AltBalaji. In the list, Netflix was only followed by Alt Balaji, having only 17 Mn downloads in 2021. According to a study by consultancy firm Media Partners Asia, Disney+Hotstar could become the second-highest revenue-earning video platform in India by 2025, behind only YouTube. Disney+Hotstar’s revenue is expected to grow from $216 Mn in 2020 to $902 Mn by 2025 and that is despite forecast contraction to $175 Mn in 2020, due to the economic impact of the pandemic. Netflix India’s revenue for the year ending March 2021 was $205.43 Mn.

In terms of market share, too, with 25% of the market, Disney+Hotstar is not much behind Netflix’s 29% shareholding in India. In terms of content, Disney+Hotstart holds the rights for all Marvel Cinematic Universe (whose movies and TV shows are currently leading in terms of watch time, user and fanbase and revenue).

Despite Netflix being as expensive as it is, it just does not deliver enough value for the money the users are paying right now. It lacks the additional benefits that come with two of its largest competitors, giving Netflix a decisive handicap in the long run.

According to an Accenture report based on a survey, as much as 74% of the Indian subscribers are convinced that the content they are paying for is too expensive. Additionally, 46% of Indian consumers plan to decrease their spending on media and entertainment over the coming year. Interestingly, with the highest subscription cost among Indian OTTs, Netflix is likely to face the brunt of decreased SVOD users.

Thus, Netflix, not only needs to work on its pricing strategy, but also sort out the content conundrum and deliver value for money.