Nagpur Startups In The Spotlight: How The City Has Emerged As A Budding Startup Hub In Maharashtra

Nagpur Startups In The Spotlight: How The City Has Emerged As A Budding Startup Hub In Maharashtra 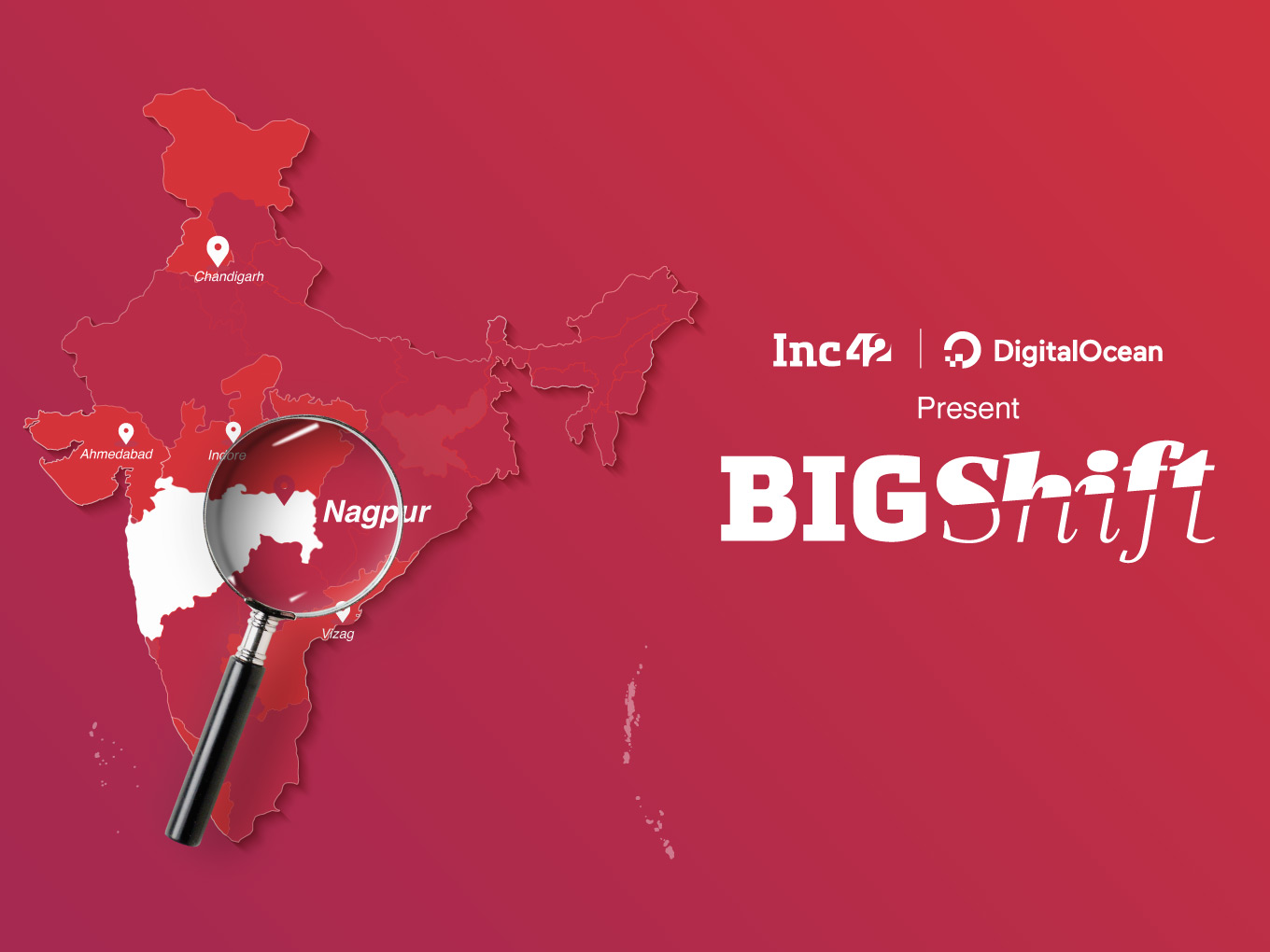 In a bid to enable, engage and empower the ecosystem, Inc42 and DigitalOcean’s BIGShift will arrive in its next destination, Nagpur, on August 3 at Chaos Theory

The event will have local stalwarts such as Shashikant Chaudhary, Cofounder, Nagpur Angels among others

Maharashtra has a vibrant startup ecosystem, with a total of 2,787 startups registered in the state, out of over 14,565 under the government’s startup-centric programmes. It was ranked first in terms of the number of startups registered with the Department For Promotion Of Industry And Internal Trade (DPIIT) in 2018.

This growth of the state can largely be attributed to India’s financial capital Mumbai, but Maharashtra has more urbanised areas than many other states where startups have flourished. Mumbai is the third-largest startup base in India after Bengaluru and Delhi. However, when you look at the overall startup ecosystem for the state of Karnataka (Delhi being a city-state), it is dwarfed by the potential of what cities in Maharashtra can achieve. Though Mumbai dominates as the primary startup hub within Maharashtra, the state’s progressive policy and regulatory environment have led to the emergence of many regional startup hubs in cities such as Pune, Thane, Nashik, Aurangabad, Nagpur, and Solapur.

Among these cities, Nagpur was awarded the Smart City status in September 2016 and is a major commercial and logistics hub in central India, thanks to its proximity to the Andhra Pradesh, Telangana and Madhya Pradesh state lines. In fact, the city has undergone tremendous economic development and urbanisation in the past few decades. Riding on this growth, it ranks 15 in India and 339 globally, based on the strength of its startup ecosystem.

This has attracted many startups to open up base here. While Ola chose the city to pilot India’s first electric vehicle charging station in 2017, Venture Catalysts, India’s first and largest integrated incubator, launched its operations in the city in 2018 to aid the city’s entrepreneurial ecosystem.

Startups such as Eat Kit, a fruit box delivery service, coupled with giants such as Grofers and BigBasket are fuelling the growth in the grocery delivery space. Other efforts to prop up the local economy include Lemon Ideas, which is working to mentor and incubate local startups from Tier 2 cities and startups such as JSR Dynamics, which is working to fulfil the state government’s aim of making Nagpur, a defence and aerospace hub.

With the government and local ecosystem stakeholders taking a keen interest in the city’s startup economy, Nagpur is well on its way to becoming a flourishing startup hub.

According to a report by Oxford Economics in 2018, Nagpur is one of the top 10 fastest growing cities in the world, with a growth rate of 8.41%. It is for these reasons that Inc42 and DigitalOcean have chosen the city as the second stop for their BIGShift initiative. Arriving in the city on August 3, the event aims to bring forth the innovation, business acumen and creativity of startups in Nagpur.

Enablers Of The Nagpur Startup Ecosystem

The third-largest city of Maharashtra, Nagpur is home to a huge community of investors, accelerators, incubators and other ecosystem enablers. According to secondary research by DataLabs, the total funding of the Nagpur-based startups from 2014 to the end of the first quarter of 2019 was $442,091 across 8 deals.

Among the investor community, Nagpur is home to the former President of TiE Nagpur, Shashikant Chaudhary. The cofounder of Nagpur Angels has backed and mentored many startups such as Shephertz, Mobikontech, CarIQ and Etext etc.

Founded in April 2015, Nagpur Angels works with the aim of preparing budding startups for early-stage investments. It provides entrepreneurs with mentoring, support and tactical as well as strategic inputs. TiE Nagpur that offers funding support to the growing startups in the city, and hosts the ‘Startup Accelerator SIG Series’ programme.

The city has also seen a great rise in the number of incubators, accelerators and coworking spaces. Among them is the Centre for Innovation at VNIT Nagpur (CIVN), which has incubated many tech startups with funding from Maharashtra government’s Rajiv Gandhi Science and Technology Commission (RGSTC) since 2013. The government of India chose CIVN to set up a startup centre in July 2016 and sanctioned $232K (INR 1.5 Cr) for it. Besides, IIM Nagpur has helped nurture 10 women-led startups under a DST-IIMB program.

Nagpur is also a base for is Venture Catalysts, which started operations in the city to unlock the hidden entrepreneurial potential.

It is owing to all these factors that Nagpur is now home to over 170 startups. Among them are startups such as Khichidiwala, Sabzilana, JSR Dynamics among others.

They have also earned fame and recognition in many ways throughout the years. Defence startup JSR Dynamics was chosen to aid the state government’s dream of building an aerospace and defence hub at the Multimodal International Cargo Hub and Airport (Mihan) in Nagpur. The Maharashtra Airport Development Company (MADC) had allotted a 27-acre land to JSR Dynamics in the SEZ for the same.

While private players have put in a lot in the development of the city’s startup ecosystem, the efforts of the government of Maharashtra cannot be overlooked. The launch of ‘Maharashtra State Innovative Startup Policy 2018’, ‘Fintech Policy’ and establishment of ‘Maharashtra State Innovation Society’ (MSInS) are among the many initiatives by the government. The state government also set up 16 startup incubator centres across the state. Including one at the CSIR-National Environmental Engineering Research Institute in Nagpur.

According to Inc42 DataLabs, the city has also seen a rise in the number of coworking spaces, offering workspaces to new startups, with a total of 12 coworking spaces available in the city.

Nagpur: Next On BIGShift Agenda

BIGShift is the platform for startups such as these from Tier 2 cities in India. After a successful run in Chandigarh on July 19, BIGShift is now coming to Nagpur to shine a light on the blooming startups of the city. Over 50 startups came together to network, connect and grow at BIGShift Chandigarh on July 19. The event organised by Inc42 and DigitalOcean was met with a lot of enthusiasm from startups and entrepreneurs in the city.

The event is scheduled for August 3 at one of Nagpur’s many coworking spaces, Chaos Theory. The lineup of speakers includes Nagpur Angels’ Chaudhary, Siddhartha Chandurkar, founder and CEO, ShepHertz and Prabhakar Jayakumar, Country Director, DigitalOcean.

BIGShift Nagpur is expected to up the ante. In 2017 when we visited the city, BIGShift saw the participation of people like Nagpur Angels’ Shashikant Chaudhary, Dinesh Jain, founder and CEO of Chicago-based Aagami, and Aditya Gandhi, Redwood Edutours cofounder and cofounder of Purple Squirrel Eduventures. Besides, Startups such as Accelo Innovation, Curaa, Somebuddy, and others got to present their business ideas and showcase their products to the audience consisting of investors, influencers and established entrepreneurs.

Just like Chandigarh, the highlight of the evening for Nagpur will be the BIGShift Pitch. The initiative is giving 5 startups from the city an opportunity to take the stage and bring the spotlight on their innovative ideas and products. Book your slot for the amazing opportunity now.

The BIGShift event series has seen participation from over 400 startup ecosystem stakeholders over the years and has enabled 40 Indian startups including DronaMaps from Visakhapatnam, O2ONOW from Nellore, Andhra Pradesh among others to showcase their products and present their ideas to investors, other entrepreneurs, influencers and more.

After the scintillating night in Chandigarh, Nagpur is all set to host the edition on August 3. The aim is to cover more startups and more cities while bringing more people from the ecosystem together to provide startups in Tier 2 cities the platform they deserve.