[What The Financials] BYJU’s Expenses Jumps Over 80% In FY20, Ad Spends Weigh In

While sale of devices contributed heavily to revenue, the edtech giant spent a mere 12% of its expense budget on the purchase of devices during the fiscal year

Edtech major BYJU’S reported a net profit of INR 51 Cr and revenues at INR 2,434 Cr in FY20 on a stand-alone basis. Profit grew by 152% year on year while revenue grew 81% during the same time period.

BYJU’S currently has 100 Mn registered students, out of which 6.5 Mn have paid for courses, as the pandemic helped the edtech company up its user base manifold over the past year and a half. In March 2020, as the pandemic spread across the country, over 6 Mn new students accessed the platform, which grew to over 7.5 Mn by April.

On a stand-alone basis, BYJU’S was profitable in FY20 as well as in FY19. However, a closer look at the financials shows a different picture.

Income Comes From Devices Over Services

On a consolidated basis, the company reported total income of INR 2703.5 Cr while reporting expenses worth INR 3021.7 Cr in FY20. It reported losses worth INR 249 Cr during the fiscal. While edtech unicorn is known for its pedagogy, the company’s main revenue stream comes from sale of devices and reference books. 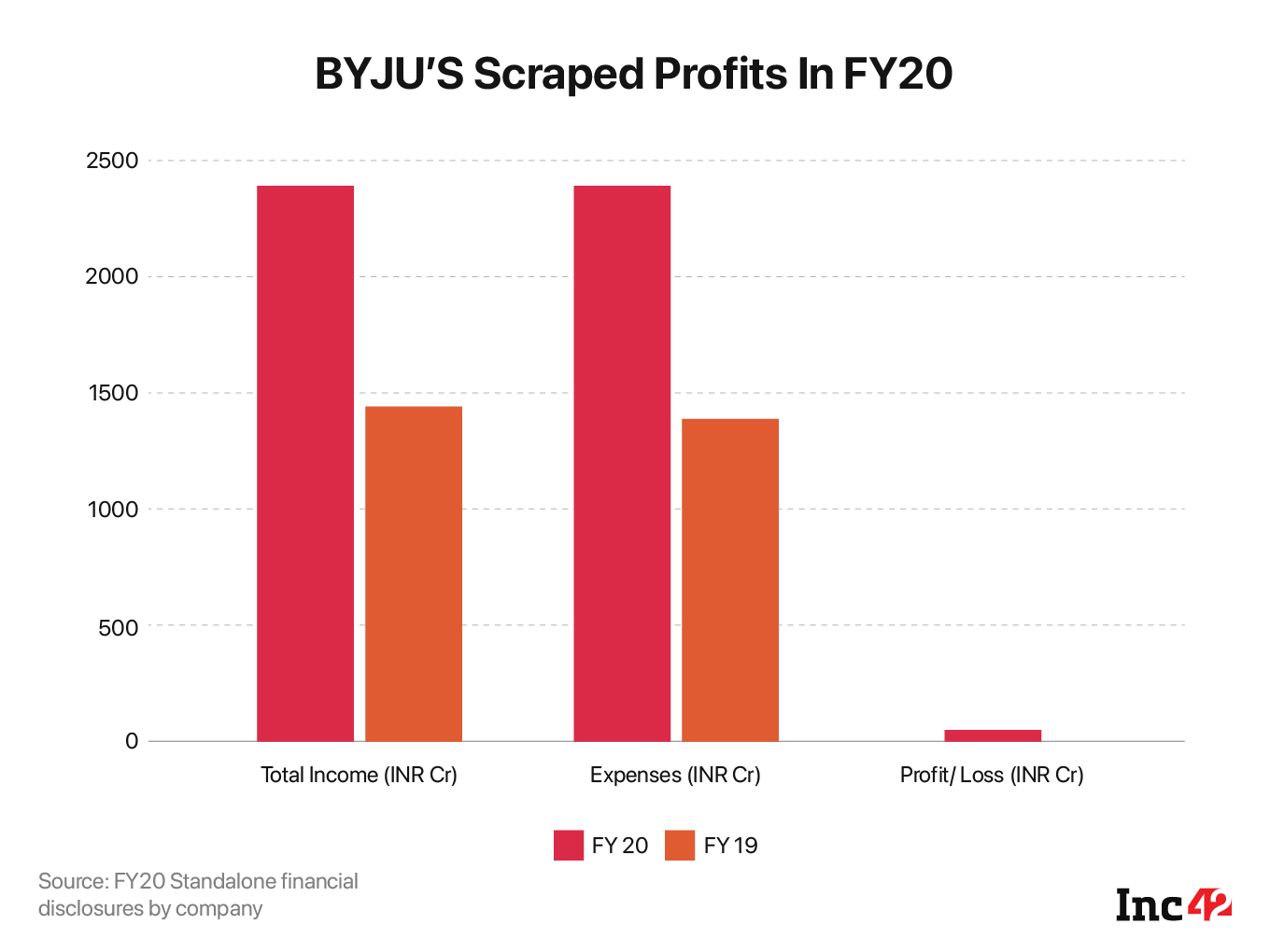 At the same time, expenses have gone up on its balance sheet, jumping over 80% during the fiscal year. A closer look at its income breakdown shows that the edtech company earned 63% of its revenue from the sale of hardware i.e., tablets and SD cards that are sold to students as part of the learning plans that it offers.

This is higher than the 55% revenue from sale of products reported in FY19. The devices help students stream content and access the educational material. 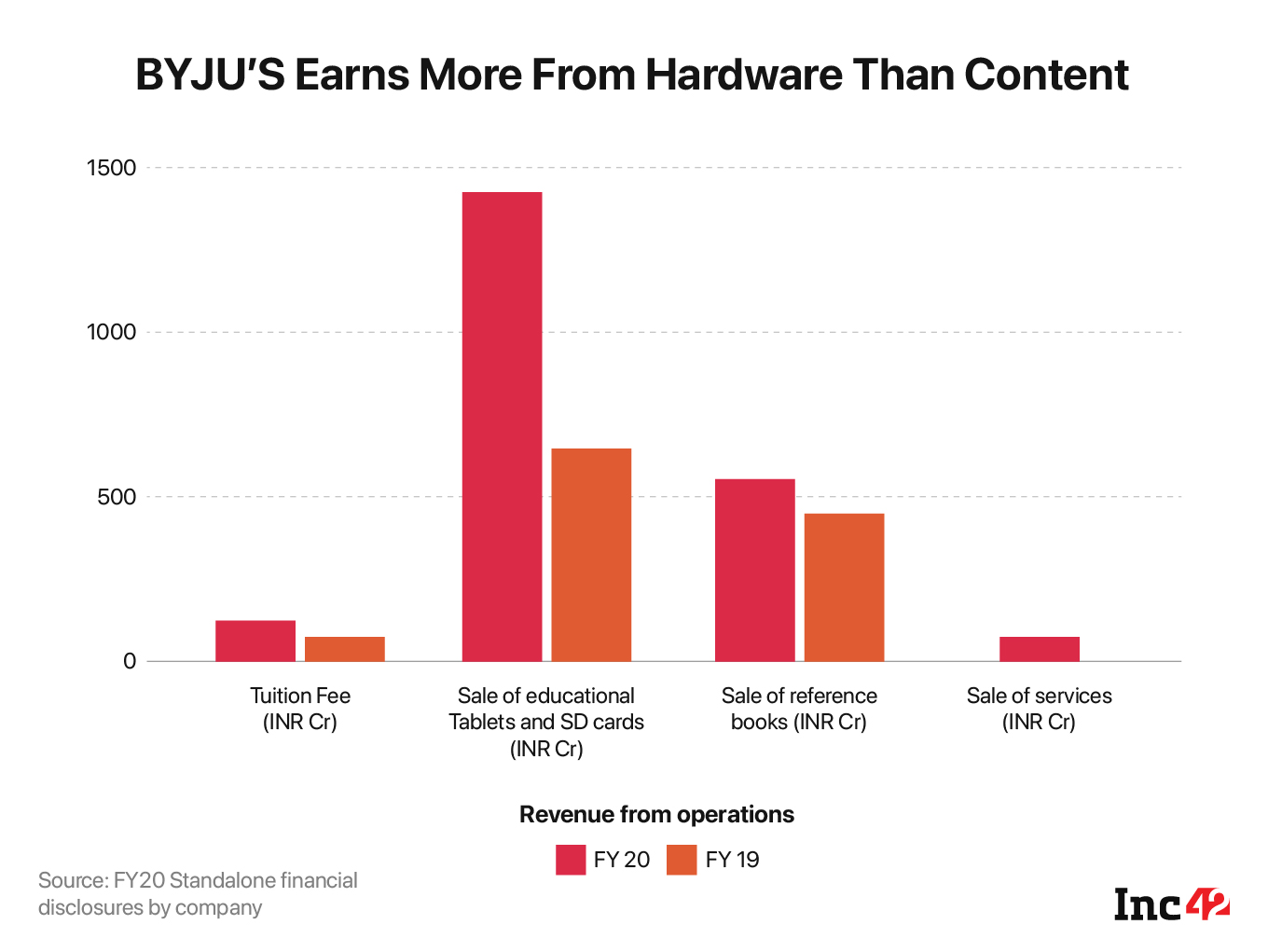 The sale of reference books contributed to 26% of the revenue in FY20. Together, reference books and hardware, comprised 90% of the income while only 7% came from tuition fees.

An analysis of the company’s expenses shows that while sale of devices contributed heavily to revenue, the edtech giant spent a mere 12% of its expense budget on the purchase of devices during the fiscal year. Consider this — for INR 1334 Cr it earned from sale of devices in FY20, it spent just INR 277 Cr or a fourth of the amount. 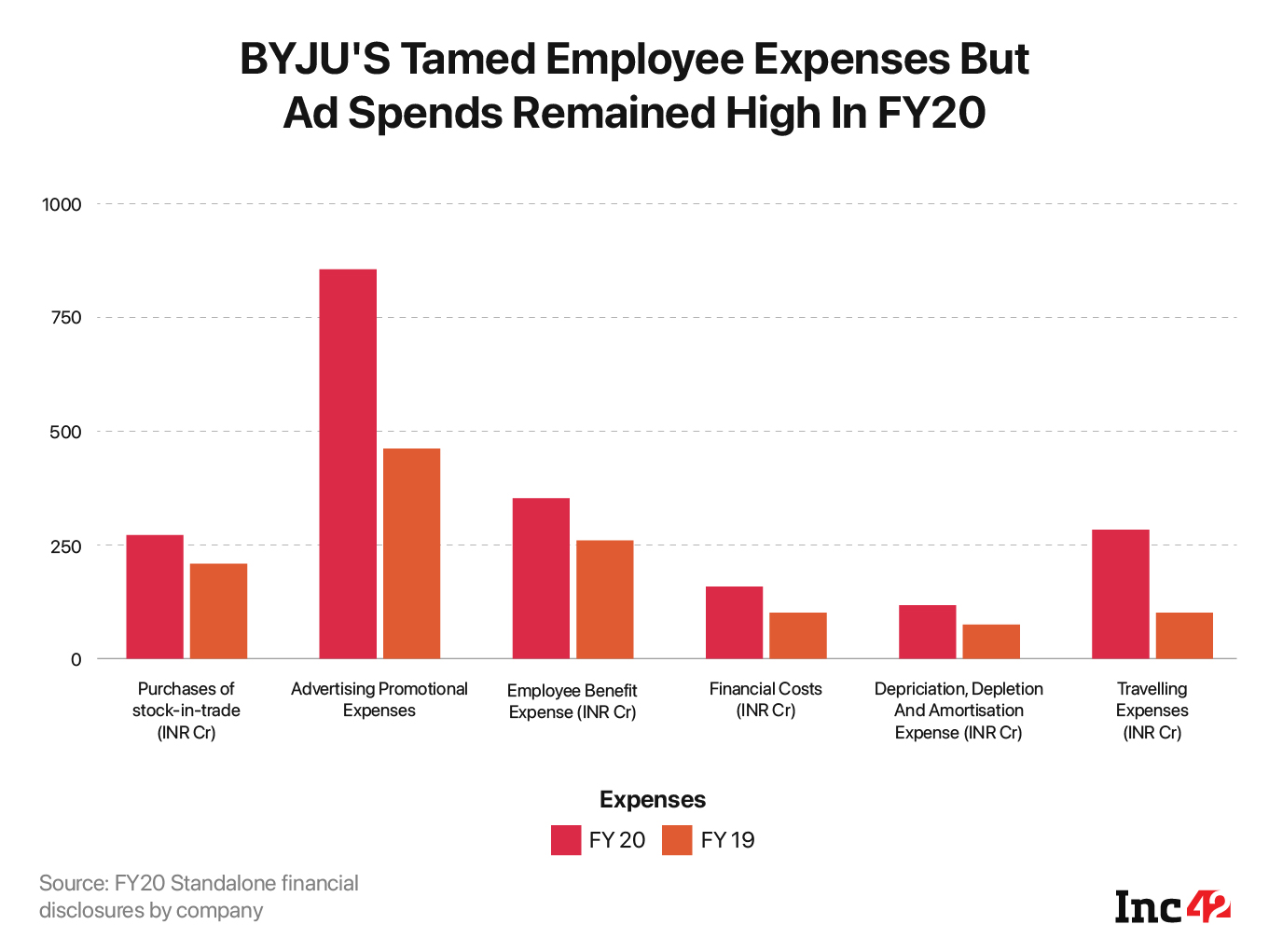 It will be interesting to note how the company’s financials would have changed in FY21 given the massive acquisition spree and growth it witnessed since the pandemic.

BYJU’S bought WhiteHat Jr for $300 Mn in August 2020 and Aakash Educational Services for $1 Bn earlier this year. In July, it acquired Mumbai-based Toppr as well as higher education platform Great Learning in two deals that are said to be worth over $600 Mn. This was in addition to its acquisition of US-based language learning app Epic for $500 Mn. In August, it also acquired augmented reality tech startup Whodat for an undisclosed sum.

As a result, BYJU’S valuation skyrocketed from around $8 Bn in the pre-pandemic era to $16.5 Bn in June this year — and it raised $1.5 Bn of funding in this period with several investment bankers courting the edtech unicorn to launch an initial public offering (IPO) at a valuation of $50 Bn.