Walmart In Final Stages Of Flipkart Deal, Amazon Left Out In The Cold

Walmart In Final Stages Of Flipkart Deal, Amazon Left Out In The Cold 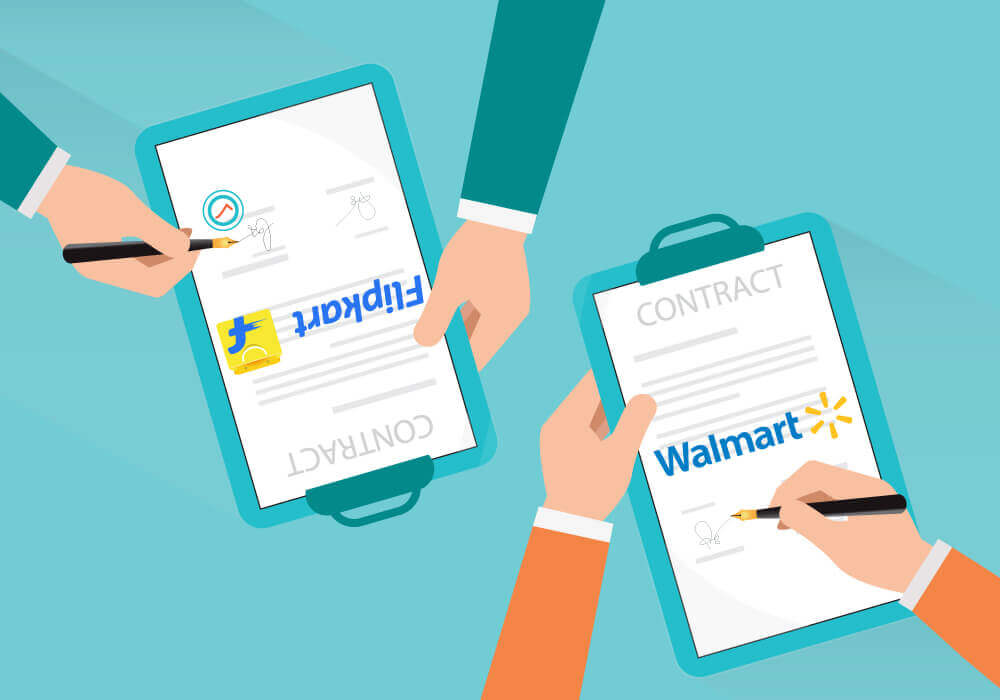 After Failed Attempt, Walmart Set To Enter Indian Ecommerce With Acquisition Of 75% Stake In Flipkart For $15 Bn, Its Largest Deal Since 1999

Finally, the long-drawn international Walmart-Amazon battle is going to extend to Indian grounds. With US retail giant Walmart on the brink of acquiring Flipkart, speculation in the media is now merging to a consensus on finalisation of the deal.

The deal will value Flipkart anywhere between $20-$22 Bn. However, Sanchit Vir Gogia, chief analyst, founder and CEO of Greyhound Research, estimated the deal to be in the range of $12-14 Bn with an equity of 70-73%, as shared in an exclusive interaction with Inc42.

This has left Amazon in despair, who gave a rival offer for the acquisition of Flipkart as well. When contacted by Inc42, SoftBank refused to comment on the development.

While analysts across the world are busy discussing the impact of the deal on the Indian ecommerce landscape, Vaitheeswaran K, the founder of India’s first ecommerce company Indiaplaza (now defunct) has an altogether different opinion. “I can’t understand why everybody is celebrating… there were three foreign companies battling it out earlier and it is the same now. There will be no dramatic change,” he said, in a recent interaction with Inc42.

“Nothing really changes in the Indian ecommerce segment. You see, Flipkart wasn’t struggling and it is a company that has been funded by many international investors, so now, instead of having multiple international companies backing Flipkart, we will have just one.”

Inc42 received mixed opinions on the deal when we reached out to industry analysts and industry stalwarts.

Sanchit believes that Walmart’s existing Cash & Carry store business in India can be expected to continue as a separate unit and not be mixed up with the business and ongoing affairs of its ecommerce business.

“It’s critical to note that Walmart or any other entity of its type cannot use acquisitions in India as a backdoor to establishing a retail presence in the country — the laws of the land are clear and we see no reason for a company like Walmart or the like to violate them,” he emphasised.

Having said that, it can be expected that Walmart will be in this journey with Flipkart (if the deal goes through) for the long haul and that both parties will join hands to bring their respective expertise to the table. It must be noted that the Flipkart Group includes its wholly owned fashion subsidiaries Myntra-Jabong, digital payments entity PhonePe, and last mile delivery unit Ekart.

A two-fold victory for Walmart

As they say, it’s a matter of luck to be at the right place at the right time. Walmart seems to have Lady Luck on its side for now. It recently sold off its UK merchandiser ASDA to Sainsbury for $10 Bn, which accorded it better negotiation powers in the face of Amazon’s rival offer to Flipkart.

Further, it’s a victory of sorts for Walmart on two fronts. First, the acquisition will help it achieve its long-cherished dream of penetrating the Indian market. Second, it will enable Walmart to continue the fight for dominance with its US incumbent Amazon on foreign shores.

As Satish Meena, senior forecast analyst, Forrester Research, told Inc42, for the last 20 years, owing to strict FDI rules, Walmart was looking for a sustainable point of entry into India. And now, when the time is ripe — the Indian ecommerce market is poised to reach $73 Bn by 2022 — it has its hands on Flipkart’s 39.5% market share, valuable even though Flipkart investor SoftBank forced Walmart to pay a premium price for its stake.

“Now, Amazon is the only player left in close competition to Walmart on Indian grounds. Meanwhile, SoftBank has no urgency to sell its shares in Flipkart, which appears to be a big positive for Flipkart as well,” added Meena.

So, in which areas can Flipkart use Walmart’s expertise?

“We are of the view that Walmart is more of a logistics and a supply chain company than a retailer. In essence, if Walmart is compared to a car, and its retail presence is the steering wheel, the real engine and the chassis are its supply chain and logistics functions. With the proposed acquisition of Flipkart, the company will be able to extend this expertise to managing physical goods in the digital world — a strength that Flipkart seriously lacks which its rival Amazon has,” said Sanchit.

Further, it must be noted is that Walmart also brings to the table a deep understanding of using an existing network of retail infrastructure and adding technology to it to offer real-time status on stocks. This, again, will come in handy for Flipkart in its journey of onboarding existing kirana stores to stock and supply products.

“Given this strength, we can well expect a significant portion of the proposed investment by Walmart — to the tune of $12-15 Bn — to be directed towards adding supply chain strengths to Flipkart. This, we believe, will act as a key differentiator from Amazon, which is increasingly adding muscle to its India business,” he added.

What’s in it for Alphabet?

In Vaitheeswaran’s opinion, there could be multiple reasons why Alphabet may be keen on investing in Flipkart. With Google eyeing the Indian ecommerce market beyond search — it is looking at actual execution of ecommerce operations — as well as the recent funding in pick-and-drop startup Dunzo, it is a lucrative market for the global search giant.

Flipkart-Walmart Vs Amazon India: What’s Next For Indian Ecommerce?

As Vivek Wadhwa, Distinguished Fellow at Carnegie Mellon University College of Engineering, Silicon Valley told Inc42, the ideal situation would have been if foreign companies were not allowed to dominate India’s ecommerce and entrepreneurship ecosystems. But compared to the alternative of allowing Amazon to build a monopoly, this is a good outcome.

“Both Amazon and Walmart will pour billions into building their distribution systems and this will improve products and services for consumers. The risks are that two foreign companies slice up the Indian market between them and kill off all local competition.”

Inc42 received some more positive outcomes from industry. As a corporate economist based in Mumbai (on condition of anonymity) said, “With the consolidation, the ecommerce segment will become more mature in terms of growth. The consumers may not see deep discounts so as to increase the customer base. The focus of the ecommerce company will eventually shift from discounts to provide better customer service and quality products. The role of customer loyalty will come into the picture with a few ecommerce giants contesting to win the customer base.”

“We might also see ecommerce players integrating seamless foreign trade into their system for availability of better products for Indian customers,” he added.

As Flipkart recently reclaimed its status as a private company — Flipkart Pte Limited — purchasing $350 Mn worth shares from existing investors, this has already improved the prospects of the ecommerce unicorn if it goes in for an IPO in future.

As far as market dominance is concerned, Amazon will certainly have a tough game to crack. With Flipkart already setting the ground to launch online groceries as well as to step into hyperlocal verticals, Walmart’s expertise will be sufficient to scale the effort at a faster pace.

However, Vaitheeswaran again has a different take here.

“There are two types of customers — those who know what they want to buy and those who don’t know what to buy. If you are looking at the former customer type, then it is hard to beat Amazon. If you’re looking at the latter type, whose demand is for a niche product, customised apparel, etc, one can beat Amazon. But if one is thinking of beating Amazon on customised product offerings where the user does not know what to buy, then there is no point in buying Flipkart at a valuation of $20 Bn,” he said.

Amazon has committed $5 Bn investment in India. Currently, it has a sizeable market share fluctuating between 30-32% in the consumer internet segment, with a productive pipeline of verticals such as ecommerce (Amazon India), digital payments (Amazon Pay), and online groceries (Amazon Pantry). It is also banking on its AI-enabled solutions such as Alexa, Echo, and cloud platform AWS which constitutes a significant stake in the company’s revenue.

Here is a lowdown of post-deal speculation that has had the media buzzing since last week.

For many, it’s sad to see an Indian company that set the playing field for ecommerce in India going into foreign hands. However, Sachin Bansal and Binny Bansal, the two people who started Flipkart as an online bookstore 10 years ago, will certainly be applauded for their successful exit as well as for setting up a mafia of startup entrepreneurs and startups in India in the years to come.

Flipkart, having exhausted more than half of its cash after raising a whopping $4 Bn funding last year, was certain to face a cash crunch sooner or later. Given this situation, a sell-off was inevitable. Either Amazon or Walmart had to acquire Flipkart.

But, with Alibaba and Amazon already holding significant market shares in India, will Walmart’s high-premium bet on Flipkart pay off?

Vaitheeswaran seems to share our concern. “Walmart has been competing with Amazon in the US for the last 10 years and look at what has happened. Amazon is dominant in a market that is supposed to Walmart’s stronghold. Walmart went to China and competed with Alibaba and lost, and Alibaba is in India already. How can you expect the company to beat both of them together in a single market?”

Unlike in China, there are no regulatory restrictions in India, which is resulting in the entire ecommerce sector getting overpowered by foreign players. As such, the deal raises many questions. The Indian trade bodies and associations have already demanded a thorough investigation of the Flipkart deal and are accusing Walmart of bypassing the FDI laws. The Confederation of All India Traders and the All India Online Vendors Association too share similar concerns.

The deal is all the more worth noting in light of the fact that Flipkart founder Sachin Bansal, who has continuously lobbied in favour of homegrown startups, had once said: “I’ll never sell Flipkart and exit.”

(The story has been written with inputs from Suprita Anupam and Shivam Srivastav.)