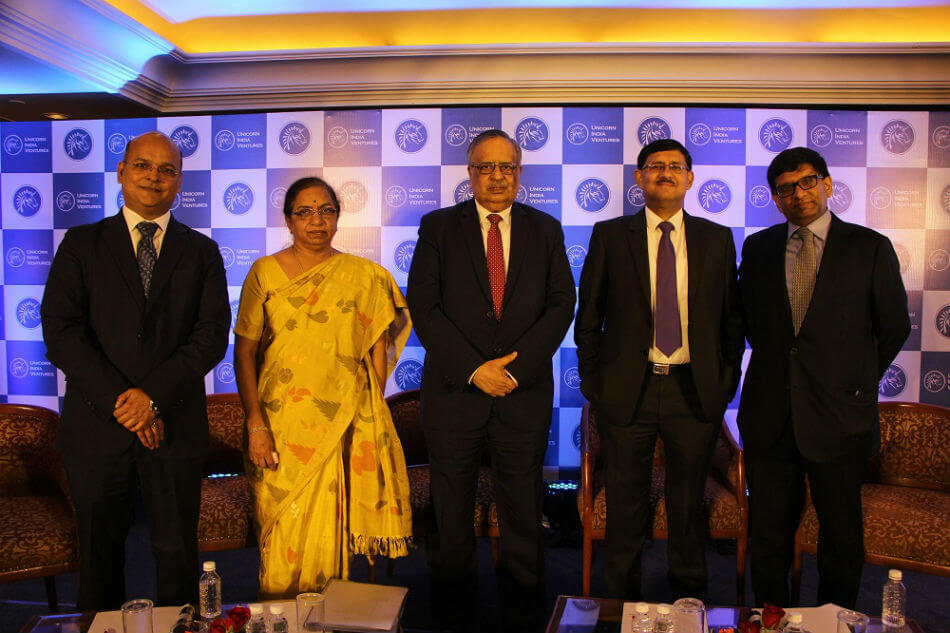 And that piece is the availability of venture debt for Indian startups.

M Damodaran, Chairman, Unicorn India Ventures, and former chief of the capital markets regulator Securities and Exchange Board of India (SEBI) spoke at length about this gap. Touching upon the fact that while creation of jobs as an outcome of direct economic growth is not taking place, on the positive side, people are thinking more in terms of creating opportunities for self-employment. This enthusiasm has also been matched by the shared optimism of people willing to write out cheques in order to ensure that those dreams turn into reality. However, there is another missing piece here. 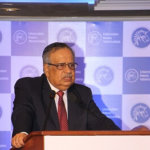 “That missing piece is the fact that these startups while do get funded, it is mostly by way of private equity, leading of course to dilution of ownership, which is not something young people are happy with. When you have an idea, you want to run with it; you don’t want to share the spoils too early in the journey. The missing piece is venture debt,” he added.

Damodaran further stated that venture debt is not something totally new. The recognition that venture debt is important has existed for a while now. However, what has not kept pace is the fact that providers of this instrument are not as many as they should have been, certainly within India. And it is into that space that Unicorn India Ventures is now stepping with its Venture Debt Fund.

“We need to address the gap in funding options. Venture debt is a space that is not yet occupied by a large number of people. We are among the early birds,” he added.

Indian Startup Ecosystem And The Case For Venture Debt

Sudip Bandyopadhyay, who recently joined the firm as a Managing Partner, further elucidated the need for venture debt in the Indian startup ecosystem.

“Startups do not have access to debt funding from banks and NBFCs because banks and NBFCs make collateral-based lending. But any organisation, for success, needs to have a right capital mix, including both debt and equity. However in the Indian startup ecosystem, though about $7 Bn of equity was raised last year, no real debt was raised. We estimate that every $3 Bn of equity should be supported by $6 Bn of debt,” revealed Sudip. 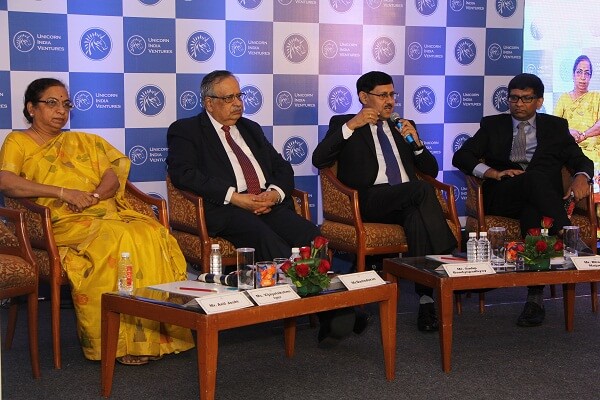 One look at the global startup ecosystems also brings up these facts. For instance, in the US, where venture debt emerged more than 30 years ago, now there exists a $3 Bn venture debt market annually. Reputed companies like Facebook, YouTube, MySpace and Kayak among others have raised venture debt. In Europe, where it came into existence in the 1990s, it is now a $1 Bn+ market. In comparison, in India, at least $500 Mn of venture debt requirement exists and there is more headroom for growth, as per Sudip.

“We have developed a very peculiar ecosystem which needs to be corrected,” he notes.

Incidentally, it is also just the right time to enter the Indian market, which has become ripe for venture debt. Typically, this happens 10-15 years after the emergence of venture equity capital market in any country. 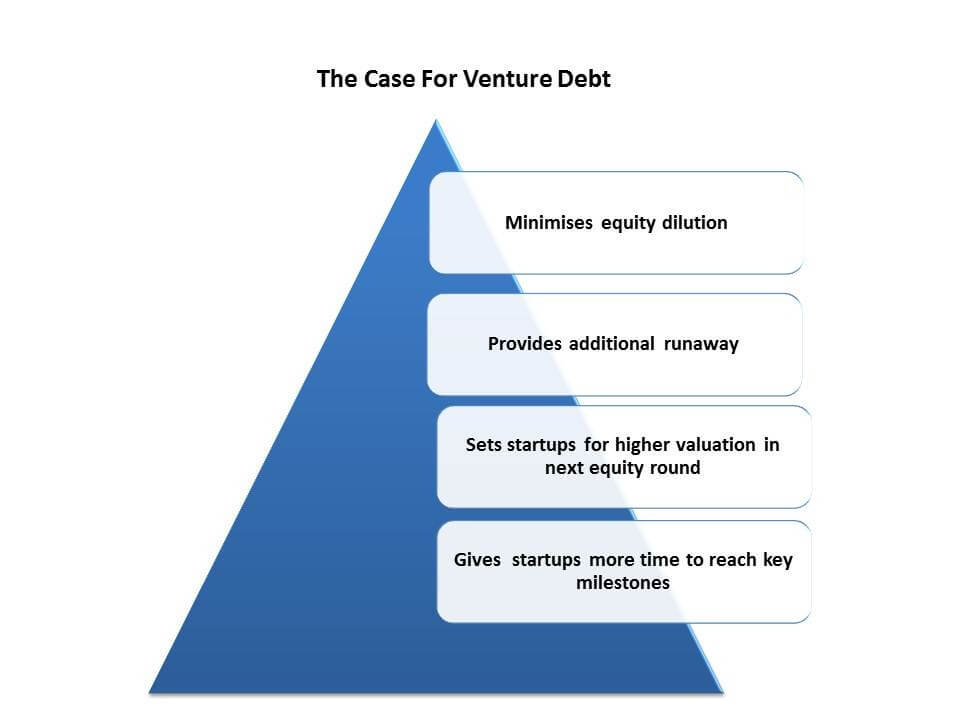 But how exactly will startups benefit from raising venture debt?

“For starters, venture debt on the balance sheet is important because promoters should have significant equity so that their interest in the venture is maintained. Also, it is significantly cheaper than equity as it minimizes dilution and allows founders to keep higher share of their company. It provides an additional runway to cover cash needs of growing businesses, giving them more time to reach key milestones. Companies can also leverage this buffer to adapt and pivot themselves. Also, this sets them up for higher valuation with less dilution in next equity round,” reveals Sudip.

So what would constitute an appropriate venture/debt-equity ratio as far as a startup is concerned?

As per Sudip, it works the opposite way for startups when compared to corporates.

“I would say in a normal corporate, depending on the sector in which it is operating, the ratios are set. So anywhere 2-3 times equity is an acceptable norm by and large. In case of startups, it works the other way round. So if you have an equity of 100%, then you should be good to raise 30-40% of debt. That’s how it starts, and the way the startup keeps maturing, it keeps on moving to 1:1 ratio. It depends on the stage at which the startup is in. Maybe, in the first round, when they are raising debt, I will say that they raise 30-40% of equity as debt,” he adds.

With these tenets in mind, the Unicorn India Venture Debt fund will look to invest in about 10 companies a year, with an average ticket size of $3 Mn (INR 20 Cr). The fund will have an investment horizon of 7-8 years and will aim for a blended ROI somewhere in the range of 20%. The fund will be making its first close of about $30.89  Mn (INR 200 Cr) in March 2018.

More importantly, unlike its equity fund raised in 2015, the sector-agnostic venture debt fund will be used to back later-stage startups that have a certain amount of cash flow. It will primarily look at international SaaS companies as well as those in the electronic system design and manufacturing (ESDM) area.

Here Sudip mentions, “There are two important criteria that we will be looking at. First, has the startup started generating cash flows? It’s very important because you come with a concept but if the concept can’t generate money, you can’t pay debt with it. We need to be sure that they have started generating cash flows.  Number two, it gives us great comfort when we know that some other venture fund has already invested in the equity of that enterprise. We will by and large look at these two factors before we deploy our funds in a startup.”

Unicorn has made 11 investments so far such as Boxx.ai, GrabonRent, Inc42,  Pharmarack, Sequretek, SmartCoin, VanityCube, among others. Which startups shall make the cut for its Venture Debt Fund is something that will be revealed with time.

But Unicorn India Ventures believes it’s just the beginning of an upward trend in venture debt funding in the Indian startup ecosystem. Damodaran aptly concluded, “What number Sudip mentioned is the number as we are seeing today. But should the idea catch on, should the startup universe become far more vibrant than it is today at this point of time and as soon as the government measures are all in place and people gain more confidence to back the idea, we will be looking at significantly higher numbers going forward.”