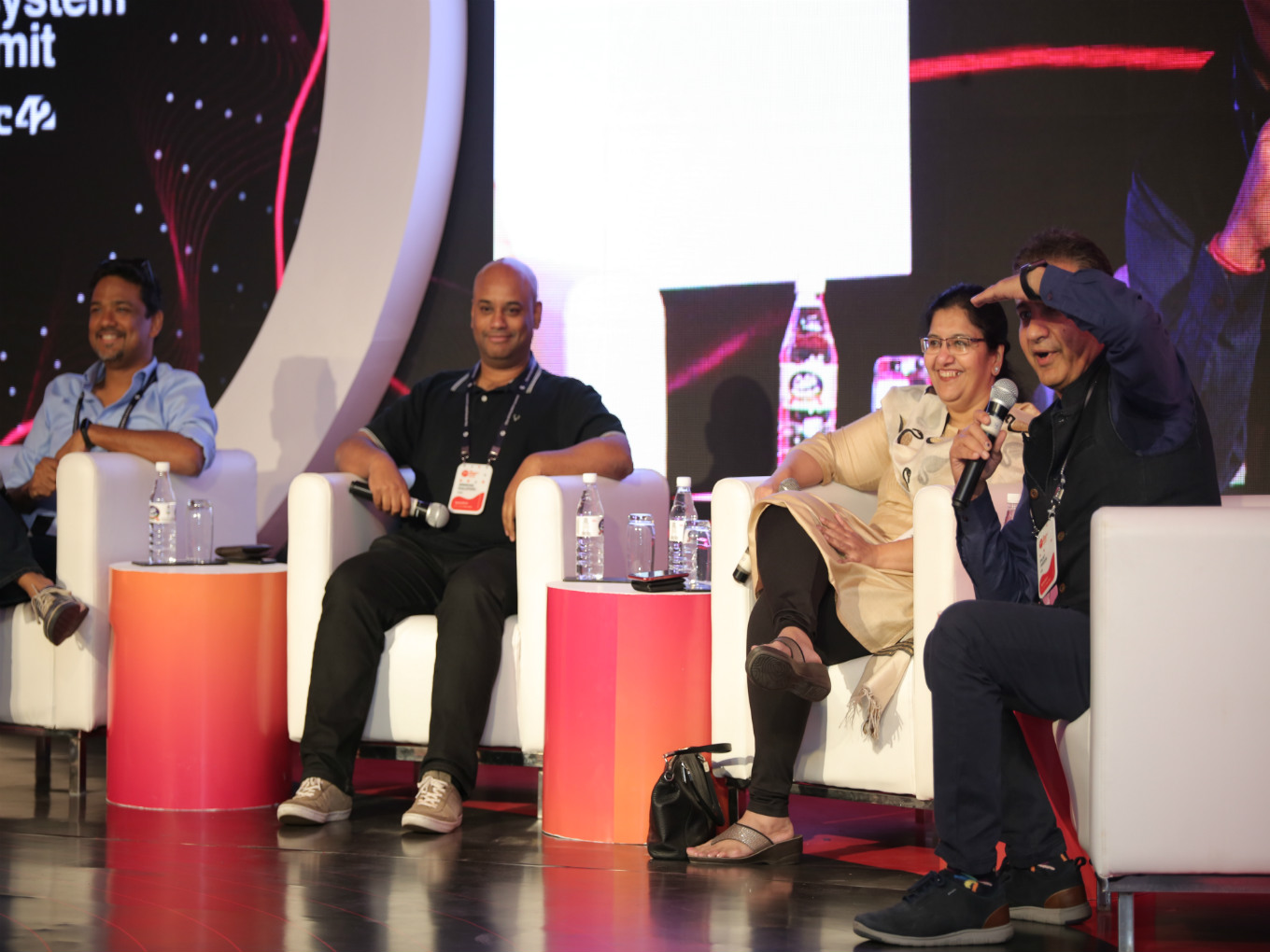 A combined effect is greater than the sum of separate effects

Startups should be specific when seeking a mentor

India is becoming a cynosure for the world in breeding startups

“But darling… in the end, you have to be your own hero because everyone is busy trying to save themselves.” — Anonymous.

Yes, we all have to be our own heroes, some more than others. Entrepreneurs, who take considerable risks to turn their ideas into reality and take along others in their journey, need to be their own heroes more than most others.

But everyone deserves a leg up, especially when they’re working on some lofty idea that they  believe will change the world. In the startup ecosystem, enablers — mentors, incubators, accelerators, venture capitalists (VC) and angel investors, etc — play the role of these saviours.

And she is right. A combined effect is greater than the sum of separate effects.

Ruparel was speaking at a panel at the startup summit, entitled ‘The Community Builders’ during Inc42’s The Ecosystem Summit, held in New Delhi on November 16.

The panellists discussed their experiences in assisting Indian startups to achieve their goals, the changes they have observed in the ecosystem, their views on the role of a mentor, and, most importantly, explored the unique relationship between startups and the enablers of the ecosystem.

Enablers Must Know Their Strengths To Help Startups

“Whether it’s capital or product building or user experience building or going to market, we need to understand where we are strong at and accordingly build that bridge for startups to help them scale their business,” says Abhishek Gupta, head of TLabs, a Times Internet-backed accelerator.

Gupta founded TLabs in 2011 as a startup accelerator. But the organisation’s model changed last year and it has now become more of a venture fund, focussed on consumer tech and consumer internet startups. So, how has been the experience for Gupta in helping startups? What changes does he notice in the startup ecosystem?

“If I compare then to today, the startup ecosystem has risen manifold but the challenges are still the same, although (we’ve) moved on as there are more mentors, product people, tech people, marketing…” Gupta says.

T-Hub CEO Kollipara feels that India’s startup ecosystem has matured due to the adoption of technology. “Unlike those days when founders who were either from an engineering background built stuff but didn’t care about the customer or business guys who thought they had an idea but didn’t have a tech team — that maturity has changed. Today, there are people addressing real issues, building teams that can handle every single component and are able to scale,” he says.

Kollipara moved out from Silicon Valley to Hyderabad and launched T-Hub in November 2015 in collaboration with the Telangana government. While in the Valley, he realised a huge gap, which determines whether a startup will fail or succeed. To bridge this gap, Kollipara started T-Hub, a not-for-profit organisation.

“I thought if I can do something to bridge this gap, that would be a noble cause. This is why T-Hub is a not-for-profit organisation,” he says.

Well, Kollipara is not the only enabler who has started a venture with a noble thought. Ruparel founded IAN with the same idea of bridging this gap way back in 2006. IAN is now touted as the world’s largest cohort of over 500 angel investors and has helped over 135 startups from different sectors.

“But, the more you evolve, there are new hurdles and new challenges,” says Ruparel. The existing challenge, she points out, is how early-stage startups face difficulties in raising funds after seed funding.

“For most companies, after raising the first half-a-million, getting the next round becomes a challenge. After raising the seed fund, they have two to three team members and a few customers, but they need more funds to scale rapidly because half-a-million is not going to take them very far,” says Ruparel.

This is one of the major areas where startups need hand-holding to scale their service, hire the right team, get market access, or leverage the entire supply chain. In 2017 alone, 17  popular startups shut down operations, Inc42 earlier reported. Most of them were just two-year-old companies and the main reason for their shutdown was the dearth of the follow-on funding.

Seeking A Mentor? Better Be Specific

It is this fear of having to shut down one’s startup that keeps entrepreneurs on their toes and hungry to learn as much as they can — so they can keep the engine chugging. Along the way, they need help from mentors. While seeking a mentor, “have a specific question,” emphasises Kollipara.

“You better know what you’re asking for. You can’t go to a mentor and say, ‘I need help on everything.’ Have a specific question as he is there for a reason,” says Kollipara.

The panellists gave different versions and definitions of the word “mentor”, but all agreed to the point that every mentor should be able to help startups.

For mentors, it is very, very important to understand that you are a coach, not a captain. You can’t be standing on the wicket and batting for them, says Ruparel.

However, startups should be careful while seeking advice from mentors who don’t really have their best interests at heart. “So founders have to use their head as well,” points out Gupta.

India Becoming A Cynosure Of The World In Breeding Startups

India is among the three largest startup ecosystems in the world. Its size, reach, and impact have witnessed huge transformation due to the country’s enormous purchasing power. The ecosystem has garnered increasing interest from a large number of global companies as well.

When Kollipara started T-Hub, the whole point was to build density (a focussed geographic area for a business) in Hyderabad and to turn the city into one of the top cities for startups, in turn impacting the entire country and even the world. And T-Hub is right on track.

“Our step one was to build just density in Hyderabad. Now to do that, you have to work with every stakeholder,” says Kollipara.

For Gupta, if startups have density in a particular place, they will get to success. “By density, I mean a very good quality of startup even in a very small area,” he says.

The experience was, however, slightly different for Ruparel. “For us to be geography-leveraged was a bit ultimate. We created a global investor group so we can actually leverage people across the globe and, in some ways, we succeeded,” says Ruparel. She also points out that if companies have to scale and move ahead, it is important for them to break the geographic model.

Gupta and Kollipara, however, believe that startups need to succeed in their density first in order to expand countrywide or worldwide.

The panellists also shared stories of startups that have done well after raising series of follow-on fundings to expand beyond geographies. Speaking of which, 15 startups across sectors including ecommerce, hospitality, fintech, hyperlocal, among others received $442.13 Mn last week, according to Inc42’s funding galore roundup (03-08 Dec 2018).

“I think, India is becoming a bit of a cynosure for the world and we are breeding companies,” says Ruparel.

Undoubtedly. On one hand, India is becoming a hub for international companies to invest in technology-enabled Indian startups and on the other, it is also a lucrative market for companies given its big, smartphone and internet-enabled population.

They say you can’t have the best of both the worlds. But India certainly does.