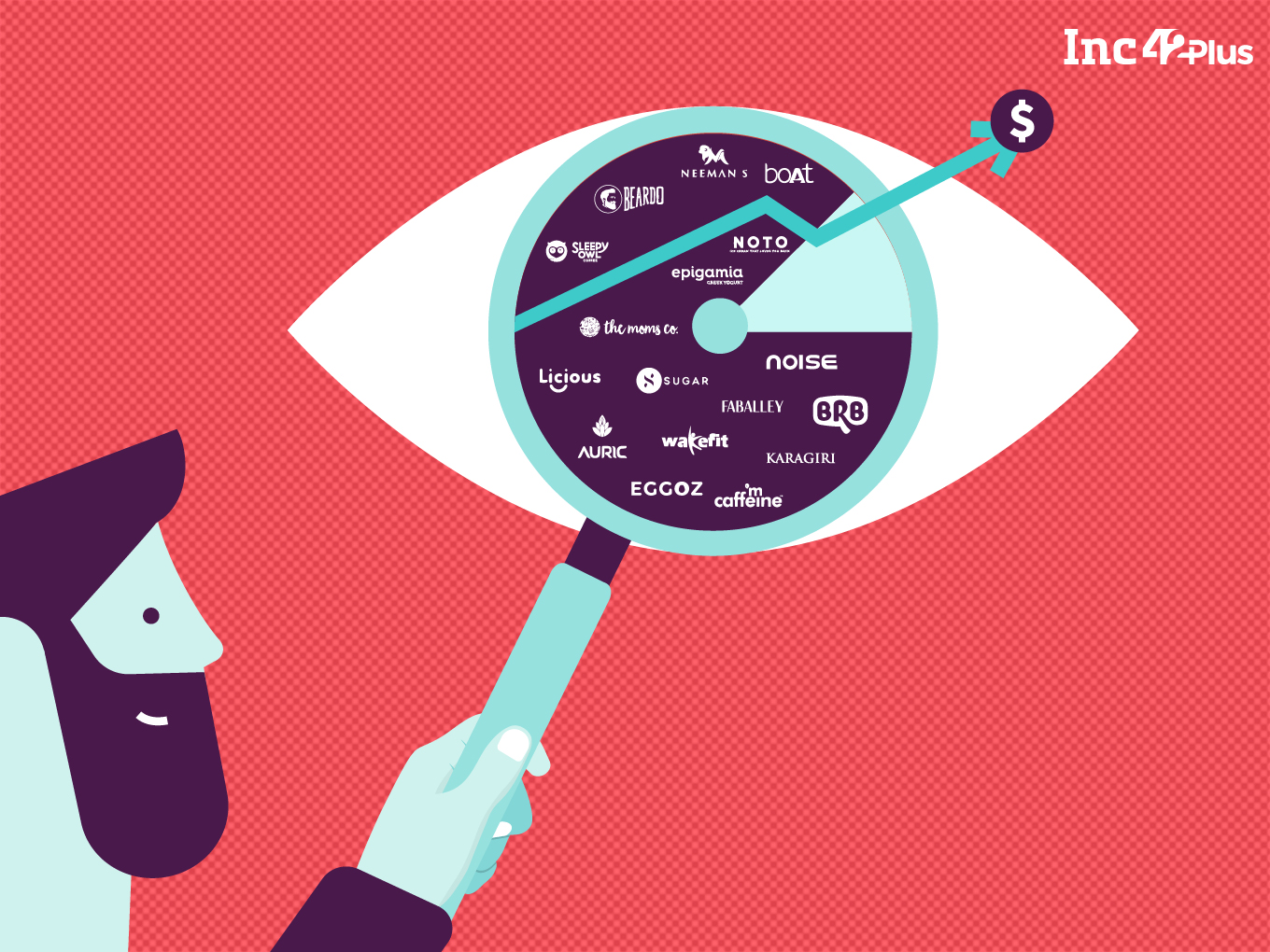 While the journey of D2C startups into heartland India is challenging, it promises to be an enriching experience

If you live in any of the metros or Tier 1 cities in India, chances are you have embraced new brands for the products you interact with on a daily basis. From the things you wear to the electronics and gadgets; from home decor to furniture; from the health foods that accompany tea (or coffee) time, to the veggies, meat and fish that go into meals; and indeed, that mattress that invitingly beckons you at the end of the day.

There’s little doubt that if one chooses, they could simply build their daily work or home routine around this new D2C or direct-to-consumer brigade, save for a few exceptions (for now) such as computers and smartphones. While the IT services revolution showed Indian techies that entrepreneurship is a possibility and led to the age of startups, now the retail and ecommerce disruption has ushered in the age of D2C.

The opportunity to disrupt the retail market is unprecedented for startups. Those with a passion for products have dug deep and created delightful product experiences to fill online retail shelves.

While there can be no arguments on the relevance or the scope of D2C brands in the Indian ecommerce market, the consumer base for such brands has grown beyond the metros and Tier 1 cities. As brands look to expand to smaller cities, sellers from Tier 2 and Tier 3 cities are also joining the D2C wave, bringing new products to the market, which are now competing with the D2C startups from Tier 1 and metros. While the journey of D2C startups into heartland India is not without its challenges, will it be an enriching experience that serves startups in not only building a strong brand in India, but also a global footprint?

By now, it’s common knowledge that the Indian internet user base is massive (776  Mn as of 2020) and continues to grow at a faster pace than ever. But till mid 2020, the pace of ecommerce adoption was nowhere close to the pace of new user addition. That changed — like pretty much everything else — with the pandemic. As of now, India is home to 130 Mn online shoppers, out of which 80 Mn were added in the past three years. More than 800 new-age brands from India have taken the D2C route and brands with native ecommerce platforms reported 88% higher consumer demand in 2020 compared to the previous year. India’s D2C market is estimated to reach $100 Bn by 2025, according to Inc42 Plus.

Backed by sales from third-party marketplaces (online and offline), D2C brands are climbing the revenue hills faster. While retail cosmetics majors such as Lotus or Revlon took at least a decade to reach the INR 100 Cr revenue mark in India, new-age brands like Mamaearth and Sugar have done it in four and eight years respectively. Beyond these, meat and seafood delivery giant Licious, electronics maker boAt, sleep solutions and furniture platform Wakefit, as well as subscription delivery platform Country Delight have also crossed the INR 100 Cr mark in five years or under.

Internet users in the Tier 2 and Tier 3 markets are moving from interacting online to transacting ecommerce consumers, believes Ankur Pahwa partner at EY. And similarly, in the cream of the market, there is a tendency for the mature consumer to move towards D2C brands. The young tech-savvy customers don’t have the brand loyalty in FMCG or fast fashion that has kept retail giants alive and this has resulted in D2C startups swooping in.

This displacement of retail brands from the online shelves has come at a fast pace. These days, it is hard to browse through BigBasket, Myntra, or any marketplace-like platform without bumping into a dozen or so D2C brands. This was not the case till late 2019, when only a handful of brands had market visibility. The influx of new online consumers has made the D2C segment more lucrative in the last 18 months, adds Pahwa.

The other big change has been products catering to real issues, problems and gaps that were not profitable enough for retail behemoths like the Tatas, Unilever and others. Fireside Ventures’ partner and cofounder Vinay Singh loves citing the example of Gynoveda when talking about why new-age brands have gripped the modern Indian consumer.

Fireside Ventures, one of the most active investors in the consumer internet space has invested in dozens of D2C startups, including Gynoveda, a women’s health and fitness startup. Singh says Gynoveda could have been made by someone like Dabur or Himalaya in the past, but it was not profitable enough for a large enterprise to justify entering a new category.

So when Gynoveda founder Rachana Gupta pitched the idea to Fireside, Singh was more than intrigued. The women’s health and wellness startup was the first investment from Fireside’s $118 Mn second fund, which it closed in January this year. The same can be said for plenty of brands in the D2C space, which entered the market by solving a gap and then built a brand and following, before expanding into new areas. 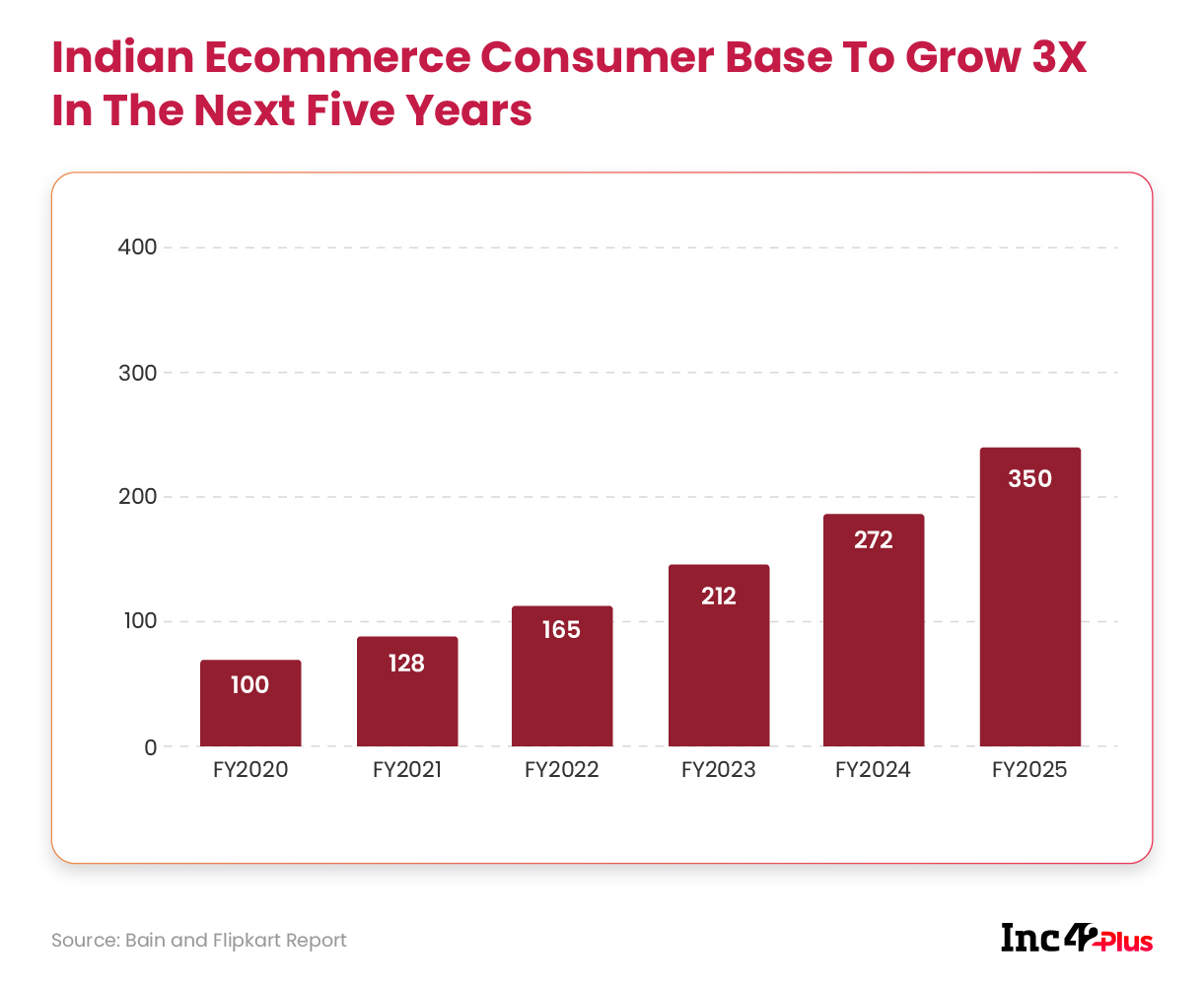 India’s D2C success stories following this model include Wakefit, which was for years known as a mattress brand, but added furniture to its product portfolio in 2020. Even Mamaearth grew its focus from babycare to the wider beauty category after gathering robust traction. For Fireside’s Singh, this is the natural progression — a D2C brand can never hope to conquer a massive category in a few months, but needs to grab a foothold before taking the next leap.

But this go-to-market strategy is also why D2C brands may find scaling hard at first. It’s relatively easier to target a small base for the first year and then slowly build upon that, rather than go after the masses, which would require distribution scale and therefore capital as well.

So, is Tier 2 and Tier 3 India thoroughly untouched by the D2C wave? Not if the past year is any indication. Ecommerce enablers such as Shipway and Shiprocket have seen quite a significant growth in traction from Tier 2 and Tier 3 markets.

Shipway cofounder Gaurav Gupta said that months before the lockdown last year in March 2020, around 51% of tracking visits for the logistics-centric customer experience platform were for customers in Tier 1 cities, which has fallen to 46% now. The share of Tier 2 and beyond has gone up — in particular, the share of deliveries tracked to Tier 3 and beyond grew from 2% to 7% in the past year, which is on top of a growing base.

It’s not just customers, but also sellers. D2C brands are emerging from these pockets as well to cater to the smaller cities and towns there. Shiprocket Fulfillment, which works directly with D2C brands to create fulfilment centres and streamline shipping, has acquired more than 200 clients and averaged 1.5 Lakh orders a month since its launch last year. The logistics tech startup registered a 273% growth in the volume of shipments year-on-year done by women sellers when compared to February 2020, with 45% coming from Tier 2 and 3 cities. In 2020 alone, Shiprocket added 68,000 new sellers, taking the total number to 85,000, where 51% were from Tier 2 and 3.

The D2C story is well and truly spreading beyond the metros into Bharat, and analysts believe that the emergence of homegrown platforms such as Sharechat, Trell, Koo and short video apps has supplemented the social media marketing on Instagram and Facebook to bring in new regional language users.

The next big thing in this sector will be D2C brands that purely cater to regional products and niche audiences in the heartland of India.

The Platform Sideshow Within The D2C Game

As the D2C brand pool expands, India is seeing a host of new startups emerge to carry the torch as Thrasio-style D2C builders or marketplaces for D2C products. Then, there are umbrella brand houses that manage a number of individual products in various categories.

The $40 Mn seed funding round for 10club from Fireside Ventures and other international investors underlines the hype around such platforms. Among other startups Mensa Brands, founded by ex-Myntra and Medlife co-founder Ananth Narayanan, raised $50 Mn in its Series A, while Tiger Global is said to have backed a similar venture headed by Flipkart veteran Rishi Vasudev, named GOAT Brand Labs. Pune-based kidswear ecommerce unicorn FirstCry has earmarked $75 Mn for capital commitments.

So clearly, this is the next hot race within the booming D2C sector. Whether these Thrasio-style models will make a dent in the market is yet to be seen. One fear is that they are creating new ecommerce platforms which might end up becoming marketplaces in the future, leaving brands exactly where they started. But the idea is that these platforms or enablers will be able to add value to the D2C brands with their marketing expertise and connections in the distribution network.

Like Pravin Jadhav, the cofounder of the now-defunct ecommerce platform Wishberg and now the founder of fintech startup Raise, mused recently, perhaps there is room for a new Amazon.

We have seen the D2C sector grow from a budding segment into a market-changing force and as it has grown, our appetite for staying on top of the D2C ecosystem has also burgeoned.

That’s why we have gone from two single-day events — the D2C Day series — to The D2C Summit, a mega two-day celebration of the brands that are glittering on our smartphone screens and apps. Slated for July 17-18, it brings D2C entrepreneurs such as Aman Gupta, cofounder of boAt, SUGAR founders Vineeta Singh and Kaushik Mukherjee, FirstCry’s Supam Maheshwari, Bombay Shaving Company’s Shantanu Deshpande, Licious cofounder Vivek Gupta, Ash Lilani of Saama Capital as well as the key investors in the D2C ecosystem.

With so many startups and D2C brands, it can be hard to keep a track of all of them. That’s why we have curated a list of more than 100 D2C brands with 10 key data points, their financial performance and more. Fashion brands feature prominently in our list and have the highest potential among all segments contributing to the D2C market. 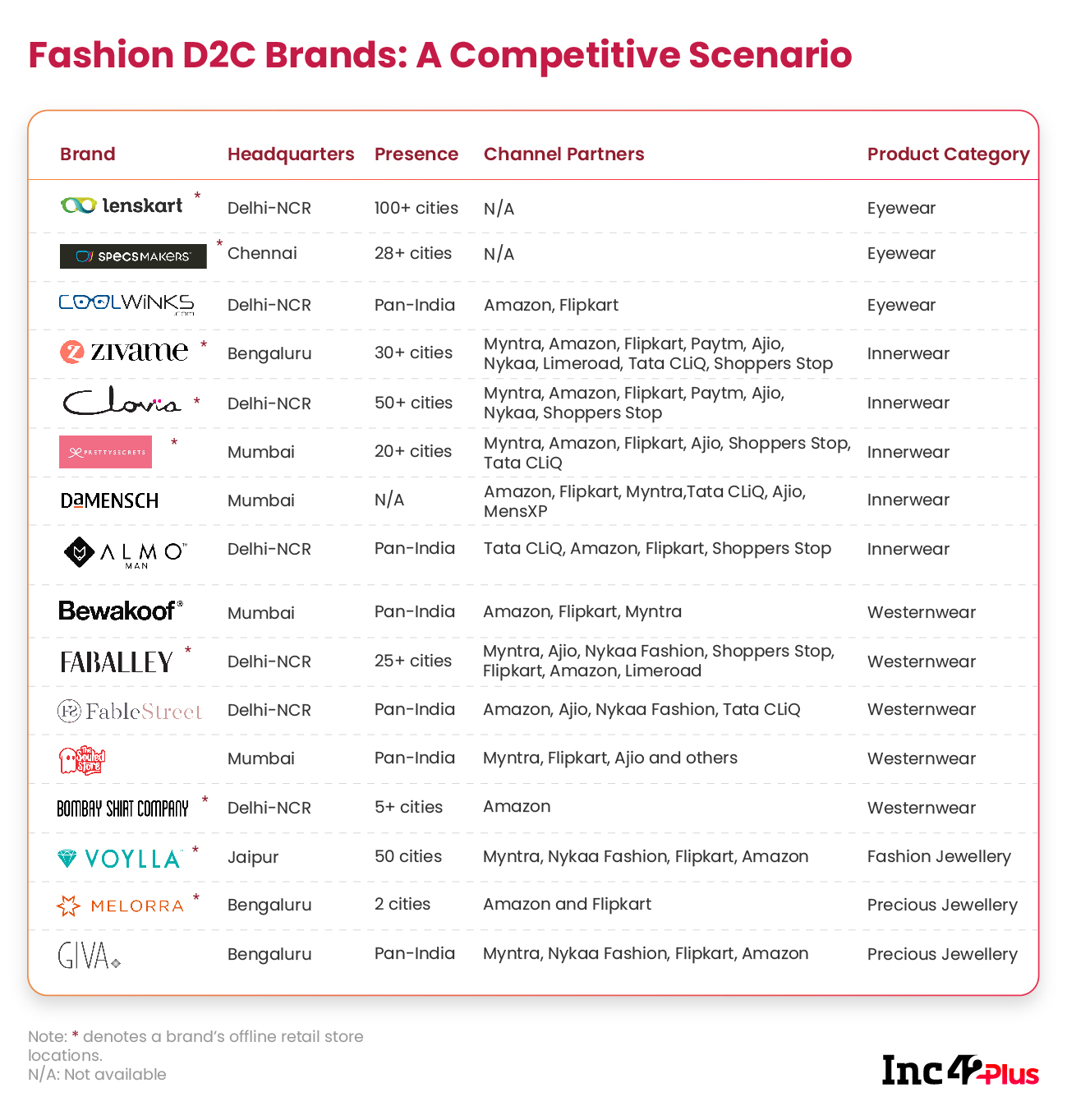 In fact, fashion and beauty are the two D2C categories (related in many ways) that have the highest potential to breach the metro and Tier 1 barrier, where brands can become household names across India.

Will the current revolution bring an INR 1,000 Cr fashion brand from among the D2C players? It’s very well possible but that’s where the existing scale of a brand will come into play. The biggest players will have an advantage as D2C brands enter the smaller cities and towns of India.

Among the categories seeing a surge in Tier 2 and 3 are electronics with companies like Noise, boAt, Atomberg, among others grabbing market share on the back of their affordable modern-day gadgets and accessories and a close eye on new features. And lastly, health foods and nutraceuticals are expected to catch the fancy of more Tier 2 and 3 shoppers, given that most of these products focus on ayurveda and natural ingredients, which are a strong attraction even in smaller towns.

There is a danger that many of the existing legacy brands might use D2C-like models to sell new SKUs or recapture the market share; some may even end up acquiring D2C brands. But it will be hard for such large companies to be agile enough to cater to all customers and therefore there will always be room for one more brand and that’s what startups will be counting on. So strap in, the D2C train has only just left the station.