India has 73 potential unicorns in 2021, up from 52 soonicorns in 2020, with Bengaluru leading the list followed by Mumbai and Delhi-NCR

The emergence of new models in fintech, consumer services and ecommerce has revitalised funding in these sectors

As startups raise capital at high valuations, investors caution against short-term thinking around growth at the cost of unit economics

A record number of unicorns in 2021 has set high expectations for the year ahead and now, all eyes are on the next batch of startups that will make it to the unicorn club over 2022 and 2023. Like the unicorn rush, we also saw more soonicorns or potential unicorns than any year in the past in 2021.

As per analysis based on funding data as well as the valuations of startups as of December 31, 2021, the Indian market currently has 73 startups in the soonicorn club, and most of them are poised to become unicorns before the end of 2022.

In 2020, India had 52 soonicorns as per our analysis, out of which the likes of Cred, Acko, Digit, Urban Company, MobiKwik, Pharmeasy, OfBusiness and others made it to the unicorn club in 2021.

There’s little doubt that the funding boom in 2021 has directly contributed to the higher number of unicorns in 2021 and across sectors, we have seen valuations grow even for early-stage startups, while growth stage startups also saw major valuation bumps in funding rounds.

The investor appetite for big deals has also grown as seen in the larger ticket sizes as well as the record number of mega deals. In a record-breaking calendar year for Indian tech, startups raised about $42 Bn across 1,579 deals in 2021, as per data recorded by Inc42.

There are no surprises in terms of startup hubs where soonicorns are emerging. Bengaluru currently has 31 potential unicorns, Mumbai is home to 19, and Delhi-NCR is expected to witness a rise of 13 unicorns in 2022. Pune and Chennai also make the list with three soonicorns each. Interestingly, several of the potential next-gen unicorns were launched in the past couple of years. The average age of the 73 soonicorns is 7.3 years, but there are a few outliers.

This includes Zepto, which pivoted from KiranaKart in early 2021, as well as edtech startups Teachmint and Brightchamps, and fintech startup CredAvenue which were launched in 2020.

Founded in 1999, Mumbai-based events and ticketing platform BookMyShow is the oldest startup in the list, while Fino Payments Bank, Infibeam and Easemytrip are the three publicly listed companies in the soonicorn club. 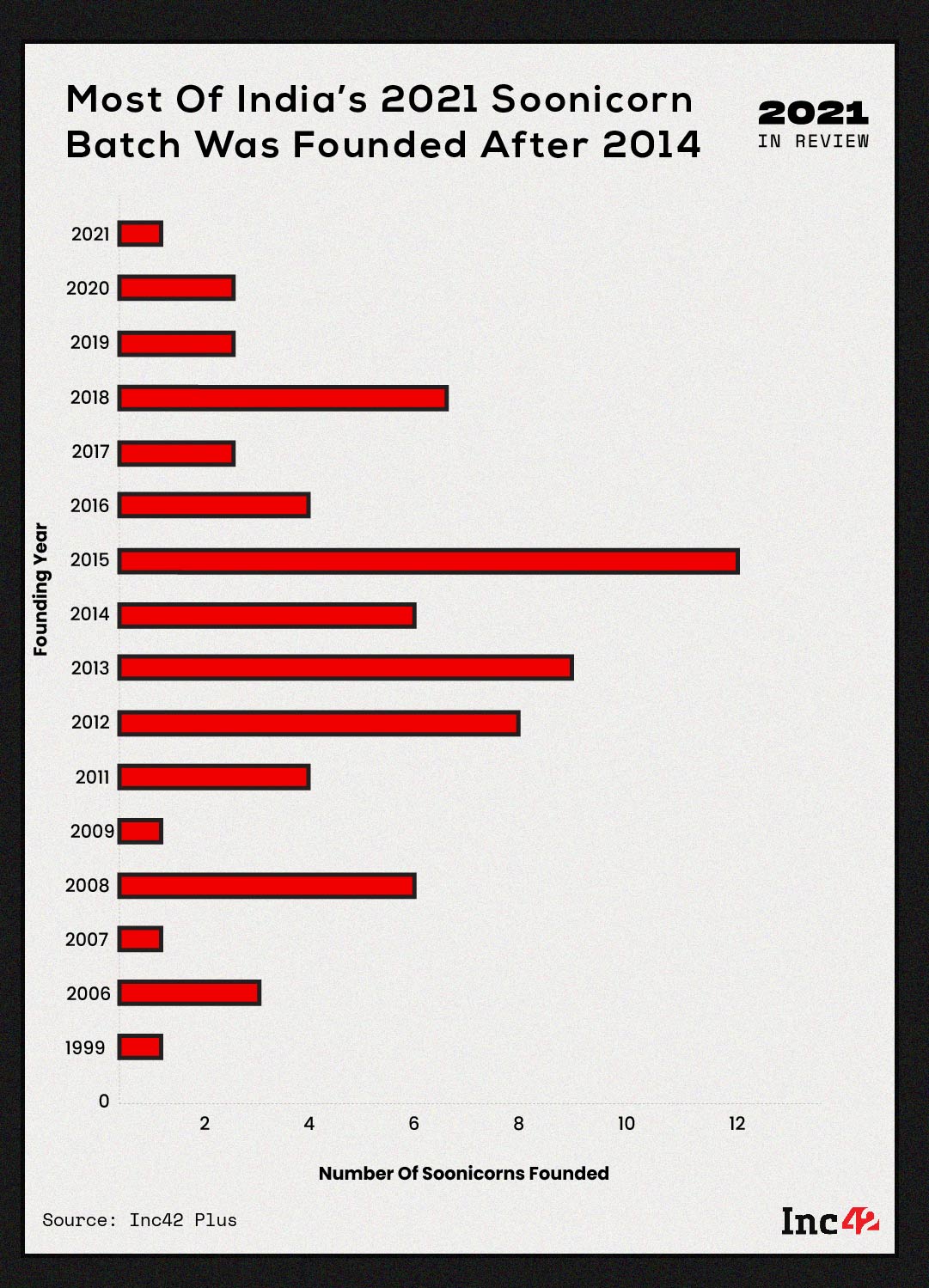 Interestingly, investors are betting big even on startups with first-time founders as well as entrepreneurs with previous experience as founders.

For instance, Zepto, which is taking on giants such as Swiggy, Grofers (Blinkit), Reliance-backed Dunzo, came out of nowhere this year to become a major contender in the quick commerce business. The Mumbai-based startup, founded by two 19-year-olds, raised back-to-back rounds from global and Indian investors in late 2021 to jump up to the soonicorn club with a $570 Mn valuation.

As per our analysis based on 73 soonicorn startups, the fintech sector is expected to contribute 20 new unicorns, followed by 13 from the ecommerce sector. The other booming sectors are enterprise tech and media & entertainment, which are expected to contribute eight unicorns each over the next couple of years.

The emergence of new models in certain sectors has revitalised funding in these areas. The biggest example is ecommerce where D2C roll-up platforms are becoming more prominent and attracting funds rapidly. Quick commerce is another revitalised funding in many of the sectors which were moving towards consolidation.

Fintech’s lead is largely down to the rising adoption of digital and retail payments solutions, neobanking startups, and API technology for lending, insurance and neobanking. Besides this, buy now pay later (BNPL) and finance process automation. Neobanking startups Jupiter, Open and Fi raised sizable funds this year, while Clear (formerly Cleartax) also mopped up $75 Mn in a round in October last year.

In the media & entertainment sector, gaming platforms are on the rise led by the likes of Zupee, WinZO, while content and creator platforms like Trell, Pratilipi and Inshorts.

The Risks For Soonicorns In India

As indicated earlier, the biggest factor behind the high valuations for these startups, particularly those which raised funding, is the higher investor appetite for riskier deals over the past 18 months.

In the past few weeks, investors have cautioned that while it’s easier for startups to raise a lot of capital now, there is the danger of startups being trapped by short-term thinking around growth rather than sustainable unit economics and losing sight of first principle thinking and culture building.

Talent crunch is by far the biggest challenge right now, and a lot of soonicorns are looking to bulk up for the battle ahead, but there’s always the danger of some of them losing steam and having to curb costs in the future and lay off employees. In other words, soonicorns need to save or plan for a rainy day.

“Given the amount of capital flowing into India, founders, today, are rushing to scale teams and their business. But the focus needs to be on the right processes or culture building for the long-term to avoid the pitfalls that may come in 2022 and beyond,” said Nitin Sharma, founding partner of Antler India, one of the most active venture capital investors in 2021.

While 2021 has brought in plenty of capital, startups will need to prove their business models and vision to justify their high valuations, while also tackling challenges such as culture dilution or attrition and profitability. This is something very few unicorns have managed to prove thus far.

Soonicorns have the opportunity to set an example for bigger publicly-listed startups and unicorns by sharpening their focus on unit economics and sustainable scaling-up.