The Future For India’s 100 Unicorn Startups

The Future For India’s 100 Unicorn Startups

Amid sizeable layoffs, the uncertainty around profitability for many, delayed IPOs and more, India's 100 unicorn startups are going through a rough patch

A hundred unicorns! That’s been the theme of the past week. While we recognise that it is indeed a milestone, we want to focus on what is coming next for this batch of 100 unicorns of India.

Amid sizeable layoffs, the uncertainty around profitability for many, cash burn, delayed IPOs and more, the Indian unicorn pool is going through turmoil even as it achieves this milestone. So what exactly does the future hold for India’s 100 unicorns?

That’s the question we are looking to answer through some founders and investors today. But before we do, here’s a look at our top stories this week:

The 100th unicorn came even as other unicorns suffered. Edtech unicorn Vedantu laid off around 200 employees in the past week, joining the likes of Unacademy, Meesho and Blinkit among unicorns with layoffs.

But layoffs are just a symptom of a larger problem and that’s to do with the intense search for profitability and cutting costs in that regard. And this pressure from the investor side is linked to surviving the rough times ahead that many expect.

Most of the investors we spoke to told us that even founders are becoming more conscious about cutting burn, focussing on actual metrics that matter rather than vanity numbers. 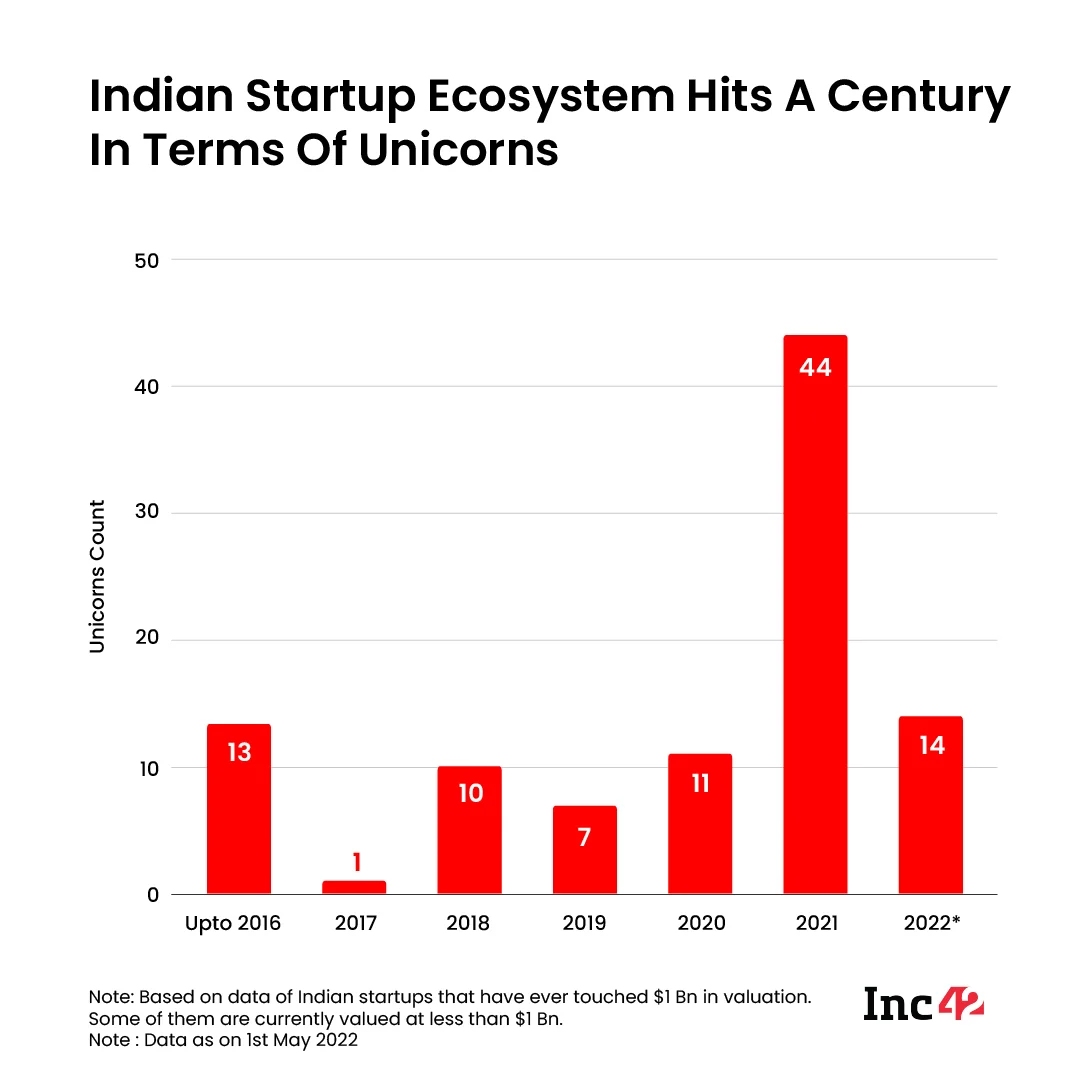 The Profit Question Is Unanswered

In many of the cases, investors are pushing the older startups in their portfolio for profits, while growth stage and early startups are being advised to be smart about marketing burn and unit economics. The thinking is that larger, more scaled-up companies can deliver on profitability in a big way by cutting costs now. The market is ready to adopt products and services, but companies need to know how to sell without losing sight of unit economics.

India’s 100 unicorns have a cumulative valuation of $333 Bn, with Flipkart and BYJU’S being the two highest valued privately-held startups with a valuation of $37.6 Bn and $21 Bn respectively. But how many unicorns are profitable?

Flipkart, for instance, is yet to turn a profit in all its years, and BYJU’S has been the sole profitable entity among the ten highest valued startups in India.

Another major indication is the slow nature of IPOs in 2022. While more than 20 new age tech companies were expected to hit the public markets this year, four months in and only Delhivery has announced its IPO date. The other companies are sceptical about what kind of reception they might get from the stock market investors, given the global sell-off pressures and RBI’s interest rate hike this past week for lending to other banks.

Unicorns that went for an IPO last year promised to reign in unit economics, but this is not the case. Nykaa lost nearly $1 Bn in value this past week, while Zomato saw more than $1.1 Bn wiped from its market cap. While Nykaa reported profits in the December quarter (albeit 58% lower), Zomato is yet to show profitability. The same is the case with Paytm. All three companies are yet to announce their FY22 financials.

The popular VC opinion is that the lack of a path to profits for even public tech companies will prove to be a sticking point for private market investors in the medium term. They are likely to push the existing unicorns who are close to the IPO exit door to go for profits now, so that such value erosion can be avoided in the future.

Will Unicorns Go Through Churn?

Many are celebrating the rise of 100 unicorns in India, but one of the things that is often neglected is that this maturity also brings risks to the startups that have already made the club. Given that many of the unicorns are in overlapping segments, M&As will likely be on the cards in sectors such as fintech, enterprisetech, ecommerce, media & entertainment and consumer services.

Even cross-sector acquisitions are likely — for instance, ecommerce and healthcare or food delivery and quick commerce — due to trends such as super apps and more. Ultimately, there will also be unicorns that will end up falling into distress sales.

We just have to look at examples such as one-time unicorns Shopclues or Quikr which lost that tag for various reasons. Investors expect to see a major consolidation wave once the public markets settle down and once the potential IPOs are back on track.

Besides Zomato, the other major listed tech companies also saw crashes in the past week. Here’s how the stocks have done since listing: 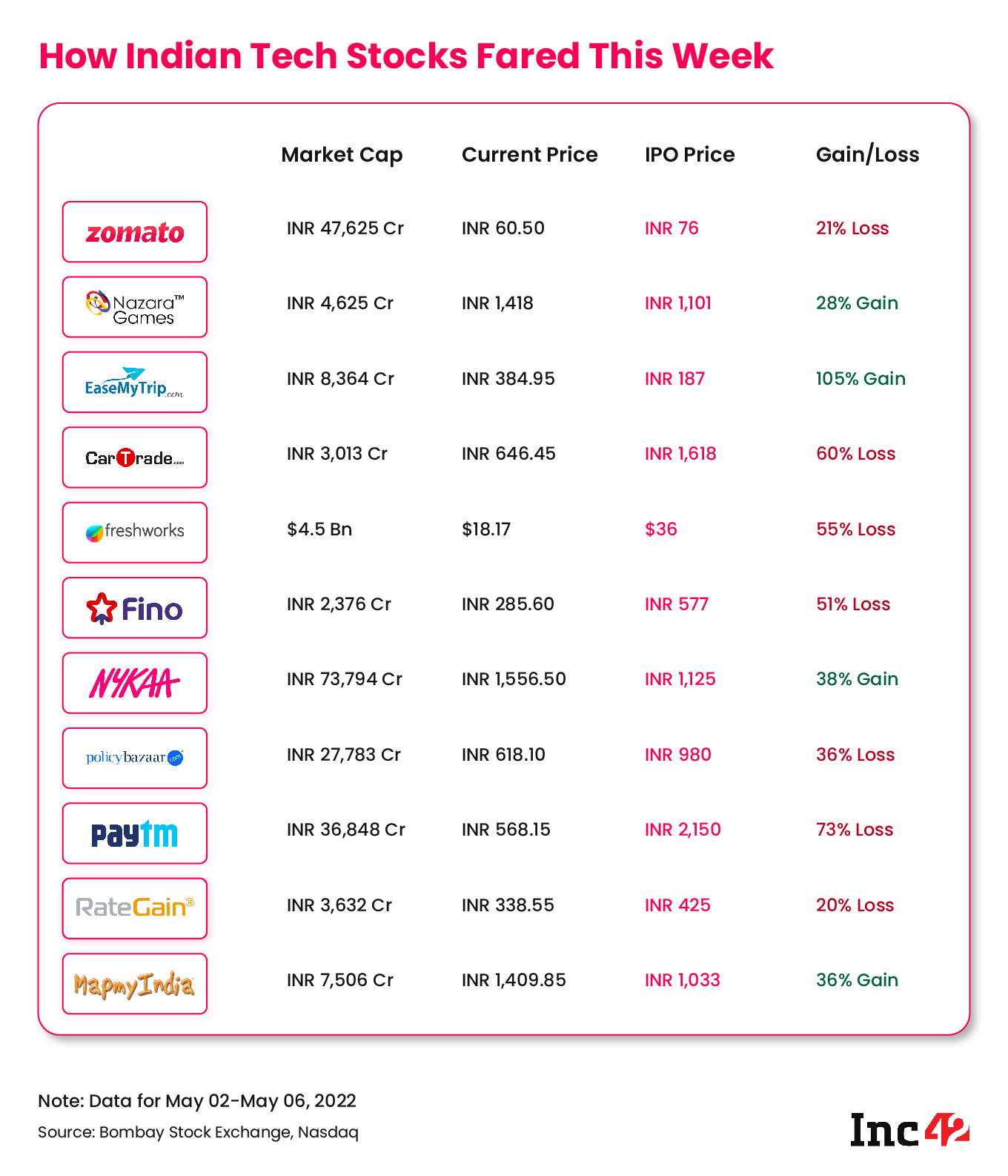 That’s all for this week. See you next Sunday with another weekly wrap.