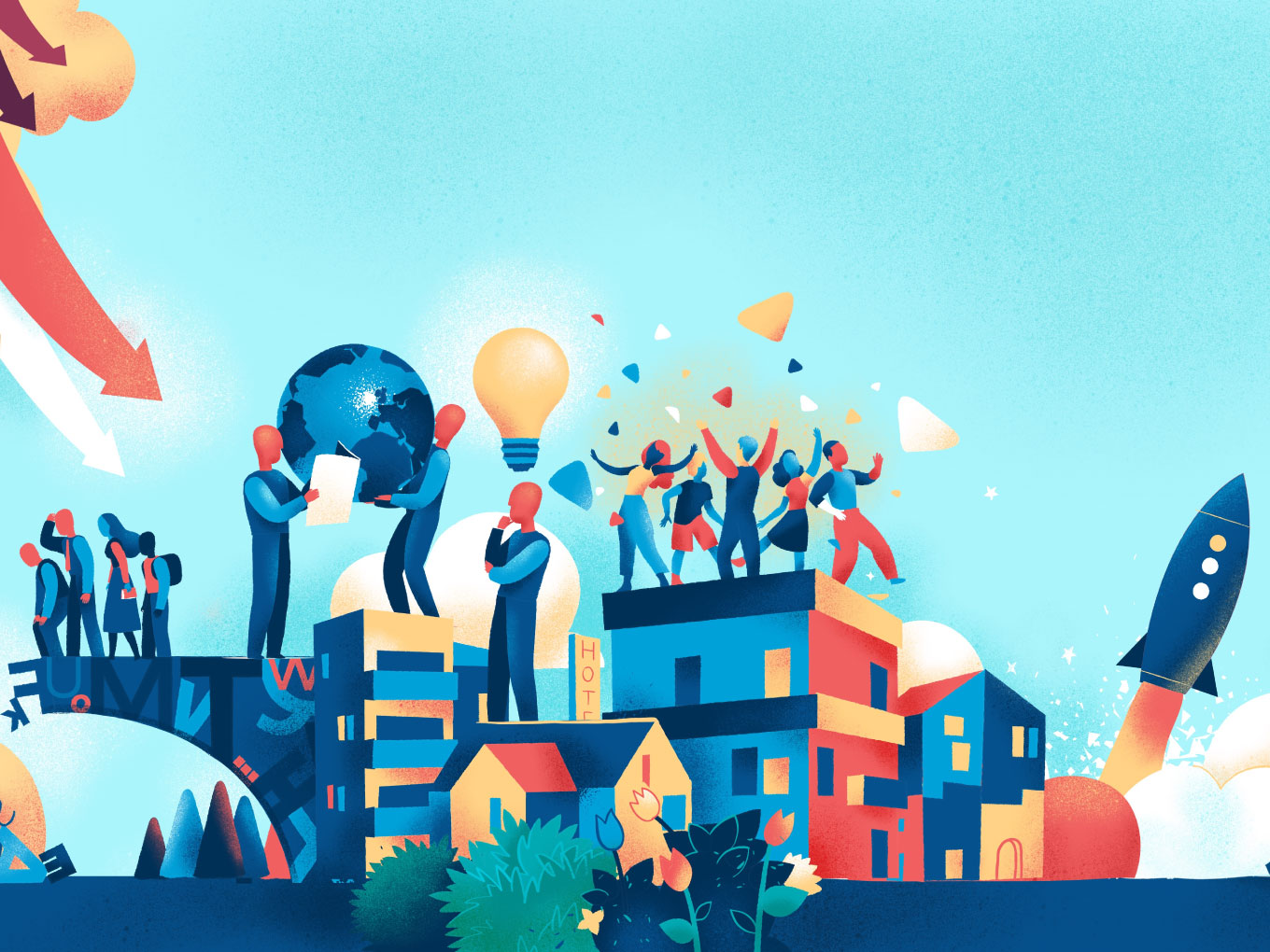 With more than 170 incubators, India is rising as a major startup hub

Influx of private players is boosting ecosystem at grassroot level

“There Is One Thing Stronger Than All The Armies In The World, And That Is An Idea Whose Time Has Come.”– Victor Hugo, French poet, novelist, and dramatist

If one has an idea, a roadmap, and an option that can create an impact in the overall industry, then there are investors, incubators and accelerators to help this aspiring entrepreneur.

One such person with an interesting back story is Gurinder Singh Sahota, founder of Silky Cup.

In 2013, Sahota came across a news article about 42 school-going girls who had to use old socks, ash, and sawdust during their menstrual cycle in a in village near Amritsar due to non-availability of affordable sanitary napkins. This increased their chances of vaginal infections and ultimately severely affect their health.

Moved by the situation Sahota dug further into this mass problem. The research led him to develop an environment-friendly and reusable menstrual cup that allows one to even exercise while in-use, and can be comfortably worn for the course of the entire day. Sahota soon started a company called Silky Cup and listed his products on popular ecommerce platforms such as Amazon and Flipkart.

Sahota aims to get this product delivered to millions of people residing in smaller cities and rural areas, where menstruation is still a “taboo”. In only a short span of three years, Silky Cup has sold over 90,000 units across India.

Since an idea is not enough, how did all this happen?

For Silky Cup, achieving these numbers wouldn’t be an easy job if it was to pursue its journey alone. While the growth for the initial years was steady, the company touched new heights after October 2018 when it became part of Huddle and HealthStart. Sahota says, “During this incubation period, from October 2018 till present, we have witnessed a steady increase in sales, secured seed funding, tapped more geographies and will soon become an omnichannel brand having a presence in all the major pharmacies in Delhi NCR.”

According to Sahota, HealthStart has provided it industry expertise, whereas Huddle has supported the startup with its core team, extensive network and synergies with its other portfolio companies — which worked in its favour. “A good incubator should provide 360-degree support to startups. In addition, a strong network and access to industry experts act as a good catalyst for a startup’s growth,” Sahota says.

Silky Cup is one of the many startups that are benefiting from the guidance and the support of incubators and accelerators in India.

As part of the Inc42 and Amazon Web Services (AWS) ongoing series, Hidden Ecosystem Champions, where we cover the champions who are creating an impact in the early-stage startup ecosystem of India. This time, we would like to turn the spotlight on some of the incubators such as Huddle, Indigram Labs Foundations, Esselerator and UIncept, that are helping early-stage startups with the right recipe to build sustainable businesses.

Bridging The Gap Between The Idea And Execution

“Sometimes it’s good to fail fast. The biggest gap is not being able to cope with the intensity of failure,” Sanil Sachar, founder, Huddle.

He further added that mentorship plays an important role in paving the pavement for startups to grow into an organisation.

Echoing this point, founder and chief mentor at UIncept (formerly UDGAM), Manish Gupta says, “If you see the startups coming out of incubators or accelerators, you will find the ratio of failure to be substantially low.”

According to experts, the main reason behind this is the selection process adopted by the programmes, also because of the support startups find when they sign up for these cohorts. But still, the number of failures exists, as startups focus more on funding rather than sustainability, which is a major reason for failure, Gupta said.

Adding a different perspective to the discussion, Ashish Khetan, chief mentor and investment officer at Indigram Labs Foundation, says that although private players are bringing in positive results, but in terms of numbers, incubators are quite high, but they reside in purely educational institutes such as Indian Institute of Technology and Indian Institute of Management. And, the primary motive of IITs or IIMs is to create good quality engineers or management graduates respectively, and not entrepreneurs.

Khetan adds, “Clearly, there is a dichotomy, where the focus is more towards education and less on entrepreneurship. But as the ecosystem is evolving, a lot of people are jumping straight away from education to entrepreneurship rather than looking for a corporate job and working for a couple of years.”

Entrepreneurship skills are necessary unless the market is oversaturated or one has a solution like Mark Zuckerberg. Even Bhavish Aggarwal, the founder of Ola, worked at Microsoft Research in Bengaluru for two years before exploring his entrepreneurial journey. But with the growth of the overall startup ecosystem in India and increased education and focus given to startups in the mainstream, India is will see the rise of more entrepreneurs like Ritesh Agarwal, founder of OYO, who started with only a bagful of passion.

While working with the startups, especially in the seed-stage and some even in the idea stage, incubators know the plans and pains of the startup founders. For instance, with a pool of 25-30 mentors in the team, UIncept works with idea-stage startups or startups with minimum viable products (MVPs). To ensure better mentorship, UIncept typically incubates 6-10 startups in each batch.

Even though all these firms fall into the same segment of incubators, the approach is different for each of them. For example, instead of focussing on the typical classroom sessions, Huddle follows the idea of one-on-one mentee engagement, in order to strengthen the affiliation and support the incubatee gets for their venture.

As soon as a startup is shortlisted, the incubator assigns a dedicated mentor from its team of 30 members which includes experts like Bhaskar Pramanik (former chairman, Microsoft India), Gautham Mukkavilli (former India Beverages CEO, PepsiCo) among others. The cofounder of Huddle, Ishaan Khosla adds, “This is necessary as each startup grows at a different pace and has unique needs to grow. And, this has enabled us to grow a promising and wide portfolio across sectors, and seven cities in India.”

Similarly, Indigram Labs too follows the one-to-one incubation model. But the unique part about the incubator is that it has a monthly theme-based program and an Indigram portfolio startup gets to experience a new theme every month, opening new windows for learning filled with excitement. For example, if a startup is working in agritech sector, Indigram offers a program for cleantech for a month and fundraising verticals in the next month to help the startup broaden its horizons. It follows a criterion where a startup is judged on various parameters including innovation, team size and quality and sustainability among many others.

On the other hand, Esselerator, an initiative by the Essel Group, offers the wide network of Zee Media and other subsidiary branches to the startup. The uniqueness about Esselerator is that it enables a startup to explore real-life problems and addressing them along with its own team of experts. This is what makes the startup get more real-world experience rather than just academic experience.

But the question is why are these incubators majorly focussing at the grassroots level?

To answer this question, Sachar said that the ratio of startups that are either created or creating a major impact are actually based out of Tier 2 or Tier 3 cities. And, in those areas, the trend is built more towards creating a solution that is catering to a need rather than a desire.

“However, not all need base businesses are impact driven and are building solutions to complement other products rather than create their own task to find a market. This brings me to the big wave of B2B businesses that are arising in the country,” added Sachar.

All these incubators started with an aim to bring in entrepreneurs, experts and industry leaders under the same roof to create something massive, which always begins at the grassroots level.

A startup cannot be successful in a day. To build the Paytms and Freshworks of tomorrow, the ecosystem needs more incubators that work at the ground level, right from the early-stage. For instance, Gupta of UIncept said, “Being the chairman of JIMS Group of Institutions, I already had the resources and network to support and guide younger entrepreneurs. So I took it upon myself to create an ecosystem which can support these individuals in early stages of their entrepreneurship journey, and possibly help create future unicorns.”

But what about failures?

“As long as we have a fail fast and keep going approach, we are in a good position. The stigma of failing needs to be removed and instead we need to realise that startups are bound to fail. The intensity of failure is directly proportionate to how the team copes with it,” Huddle founder said.

With more than 250 incubators and accelerators in India, the country is now one of the largest startup hubs in the world. And, with currently operating 39K startups in the nation, the day is not far when the world will see more successful startups like Flipkart, Ola, OYO and Swiggy coming out of India’s startup ecosystem.

For most of the incubators, the main reason behind this enormous growth has been the startup ecosystems which were majorly concentrated in metropolitan cities like Delhi, Bengaluru, Mumbai, until a couple of years back. Now, the times have changed, and even smaller cities like Pune, Lucknow, Jaipur and Hyderabad too have seen the rise of support systems, essential for fostering the startups mushrooming in the mid-tier cities of India.