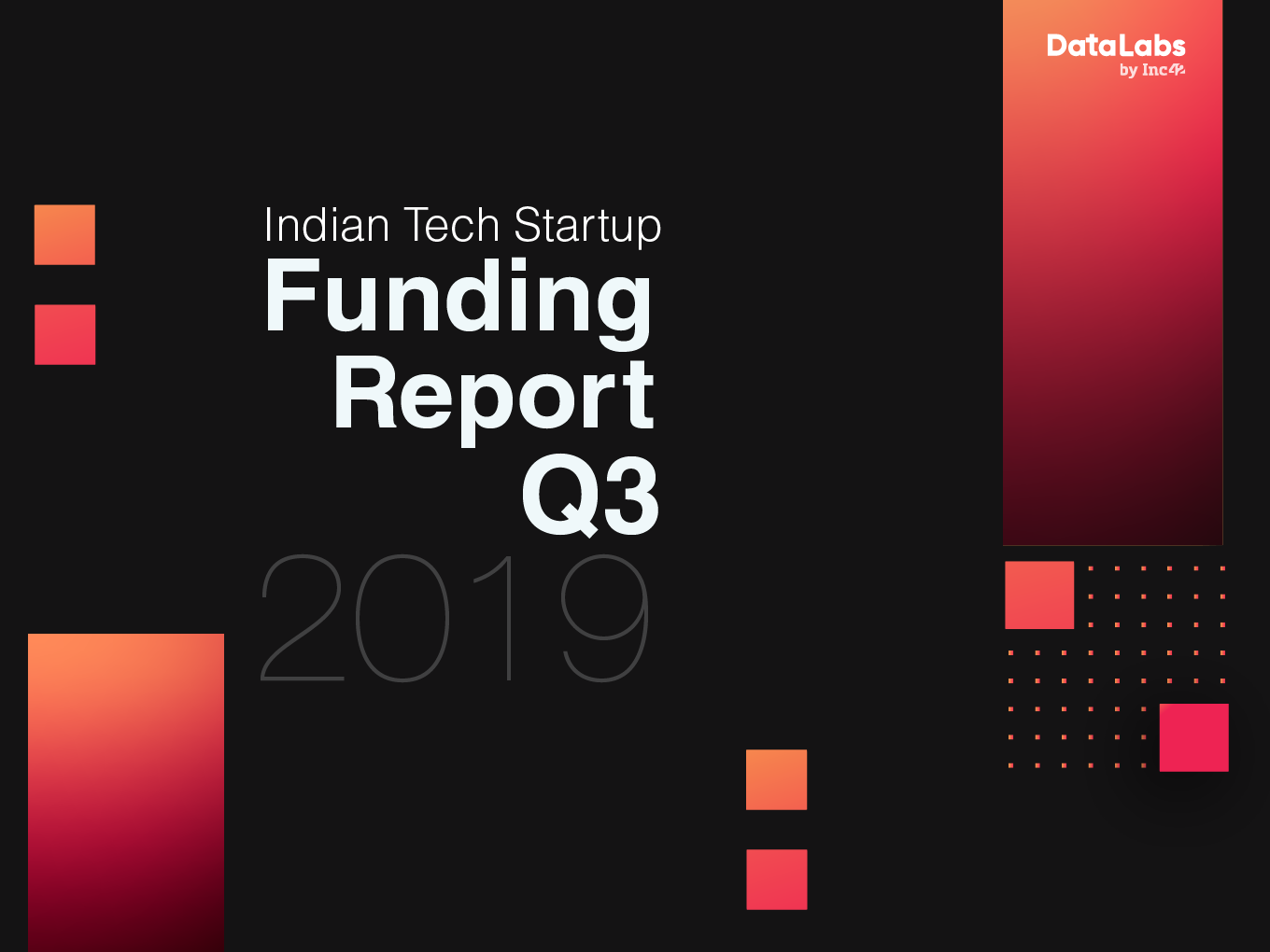 The overall funding secured by Indian startups was over $3.2 Bn across 193 deals

This article is an extract from DataLabs by Inc42’s ‘Indian Tech Funding Report Q3 2019’ which provides a detailed analysis of the funding trends, the hottest sectors for investments, the most active angel investors and VCs in India as well as mergers and acquisitions (M&As) in the Indian startup ecosystem in the third quarter of 2019.

Venture capital (VC) firms, in simple words, are the investment firms that pool money from HNIs (high net worth individuals) or large enterprises and invest in businesses that are traditionally avoided by the banks. Because of the risky nature of the investments, VCs usually expect a much higher rate of return from the businesses they invest in.

The role of these firms in the progress and the rise of the tech startups in India cannot be understated. Providing financial resources to the startups, be it at early-stage or growth stage of a startup, VCs have acted as catalysts for the growth of the Indian startup ecosystem.

According to the Indian Tech Funding Report Q3, 2019 by Inc42 DataLabs the overall funding secured by Indian startups was over $3.2 Bn across 193 deals. As per DataLabs analysis, the share of funding amount for Tier 1 city’s startups was a whopping 99% in this duration.

The top 10 most active VCs alone contributed to 32% of the total deal count in this funding scenario and most of these deals were in the fintech sector. These VCs are:

Sequoia Capital, based out of California, is leading the list with its participation in 13 deals in the fintech sector. A few startups in the funded portfolio are such as Vymo, Pocket Aces, Awfis and more. Last year, the firm stood second behind Accel participating in 31 deals.

While in 2018 Accel, formerly known as Accel Partners, was leading the list with 38 deal participations, in Q3 2019, it stands second with its participation in 10 deals across fintech and real estate tech. Accel too is based out of California and funded startups in its portfolio are Stanza Living, Drip Capital and Indifi.

Also known as “The Tiger Fund”, this VC is based out of New York. The VC firm participated in eight deals in all of 2018, but in Q3 2019 alone it has participated in seven deals in the fintech sector, backing startups such as OkCredit, UrbanClap and INDWealth.

Based in Delhi NCR, GrowX is an early-stage investment firm with its focus on B2B and deeptech. This year’s third quarter saw the firm participate in six deals across healthtech and deeptech sector while in the entire 2018, it had participated in five deals. Startups funded include Doxper, Pixxel and Meddo.

With its headquarters in both China and India, SAIF Partners, a stage and sector agnostic private equity firm in Asia, stands at the fifth position with five deal participations in the fintech sector. This VC was amongst the most active last year as well, with its overall participation in 14 deals. The funded startups of Q3 2019 include names such as ShareChat, Coverfox and Rivigo.

India’s first independent venture debt firm, Trifecta Capital, stands at the sixth position with participation in just four deals in the third quarter across multiple sectors. Funded startups include Vedantu, Zoom Car and Quikr. Its overall participation in the year 2018 was in 13 deals.

London based, Stead Capital Management stands in 7th position, close behind Trifecta with its participation in four deals in the fintech sector. The startups funded include names such as Chargebee, BharatPe and Zenoti. Entire last year, this VC firm was not as active, having participated in mere 3 deals.

Omidyar Network too is a VC based out of California and stands at the eight position, participating in the four deals, just as the names above it across edtech and fintech sectors. The funded startups in its portfolio include Yelo, Whitehat Jr and Indifi. This VC firm has also actively participated in the funding deals over the years, in 2018 alone it participated in 14 deals.

Another California based VC, Lightspeed Venture Capitals focus on early-stage investments mostly in the enterprisetech and consumer space. While in 2018 it participated in 11 deals, Q3 2019 saw its participation in four deals across various sectors. The funded startups include Freight Tiger, Share Chat and MyScoot.

Formerly known as IDG Ventures India, Chiratae Ventures is based out of Delhi, India and participated in four deals across various sectors in the third quarter of 2019. The startups it has funded include names such as Emotix, PlayShifu and Blowhorn. This firm was one of the least active VC firms last year with its participation in a mere two deals.