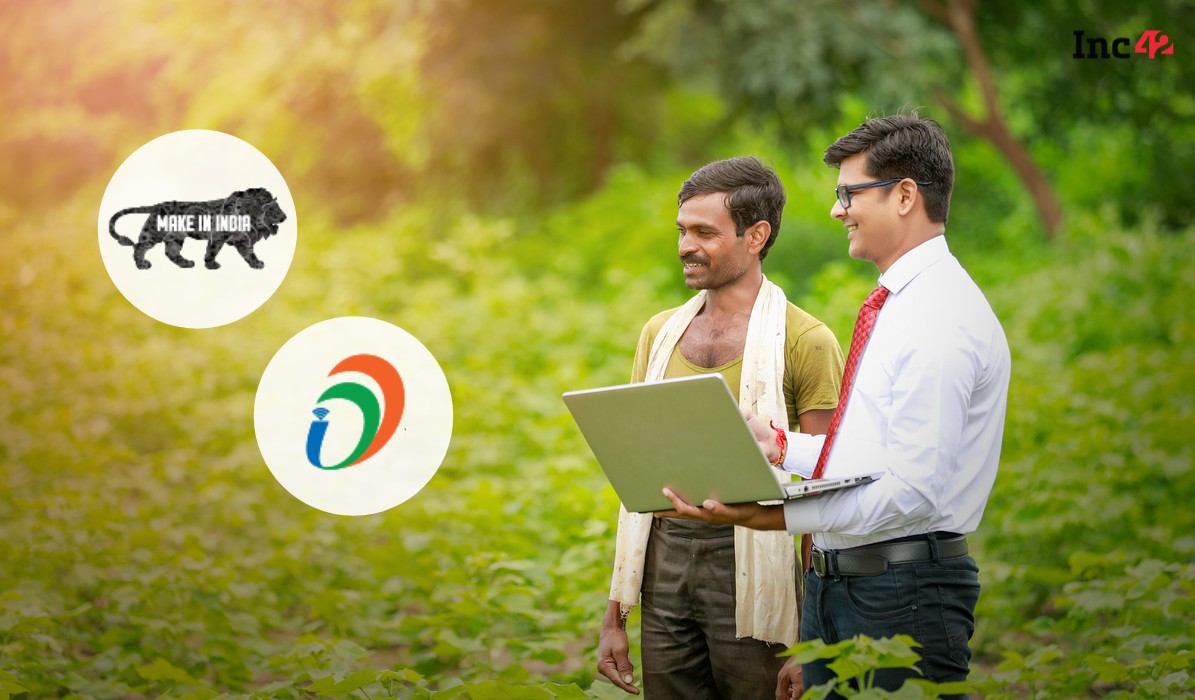 Here’s taking a closer look at the progress, milestones and challenges of these initiatives

Back in 2014, India had just over 233 Mn internet users in a population just shy of 1.3 Bn, with a lowly penetration rate of under 20%. But with its focus on technology and boosting India’s digital economy, the new government which was formed in 2014, set out to change this.

In September 2014, Prime Minister Narendra Modi launched one of the flagship projects ‘Make In India’ among a host of other initiatives to build the digital economy. By July 2015, the launch of Digital India signalled India’s intention of becoming a global tech superpower.

While Make In India was devised to transform India into a global design and manufacturing hub from an import-centric consumer market, the Digital India programme was about reviving infrastructure projects and bring a measure of digitisation in every aspect of life — from finance to education to commerce and governance. Together, Digital India and Make In India served as a powerful call to action for Indian innovators, citizens and business leaders. And just as importantly, it was an invitation to potential partners and investors around the world that India was ready to become more than just a massive consumer market.

Changing The Game For Tech Startups

One of the major indicators of digital transformation in India is the rise in the number of internet subscribers in India. From around 233 Mn in 2014, India today has over 504 Mn active internet users. Much of the credit for this goes to the launch of Reliance Jio, which completely changed the telecom and mobile internet game in 2016. As of July 2020, TRAI reported 676 Mn broadband subscribers in India, including both wireless and wireline connections. Further, India has over 1.14 Bn mobile subscribers, out of which 629 Mn are based in urban areas. 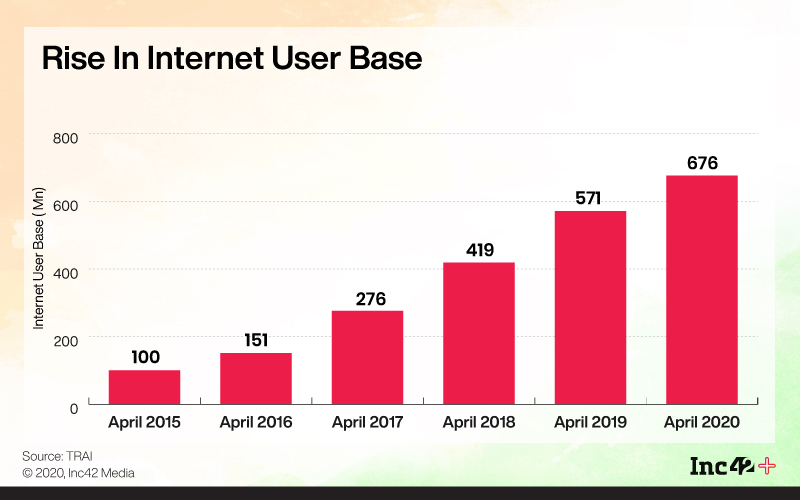 According to Mary Meeker’s 2019 Internet Trends Report, the global internet user base has touched 3.8 Bn which is more than half of the world’s population. Of these, India has around 12% of the share. As a result of increased smartphone and mobile internet penetration, Indian startups have also been targeting their efforts to bring the so-called next billion consumers under the digital fold.

A key part of the non-mobile push has come from BharatNet, which initially aimed to connect 2.5 Lakh gram panchayats with high-speed internet. Till now (August 2020), 1.42 Lakh Gram Panchayats are connected with optical fiber.

One of the major objectives of Digital India was to bridge the massive digital divide between urban and rural India. While we are still many years from reaching parity, some of the initiatives taken by the government towards this goal include Aadhaar enrollment, Jan Dhan Yojana, and Common Service Centres (CSC) centers among others. Of course, the role of the private sector companies such as Reliance Jio, Google, Facebook and smartphone brands such as Xiaomi cannot be ignored in this context. 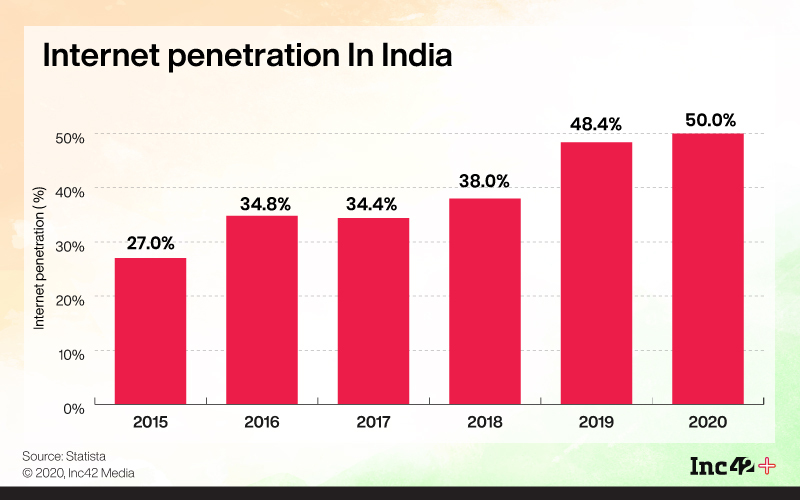 Between 2014 to July 2019, over 3 Lakh CSCs were set up across the country, according to Ravi Shankar Prasad. These CSCs are said to have built digital literacy among 1.5 Cr. Indians and provided employment to 12 Lakh youth. However, an official publication in June 2019 noted that more than 11K gram panchayats do not have access to CSCs, so while the journey from 2014 onwards has been fruitful in many ways, there is a long way to go, something which was highlighted during the early days of the lockdown when many struggled to get online for their school lessons and remote work.

Why Local Manufacturing Is Closely Linked To Digital India Dream 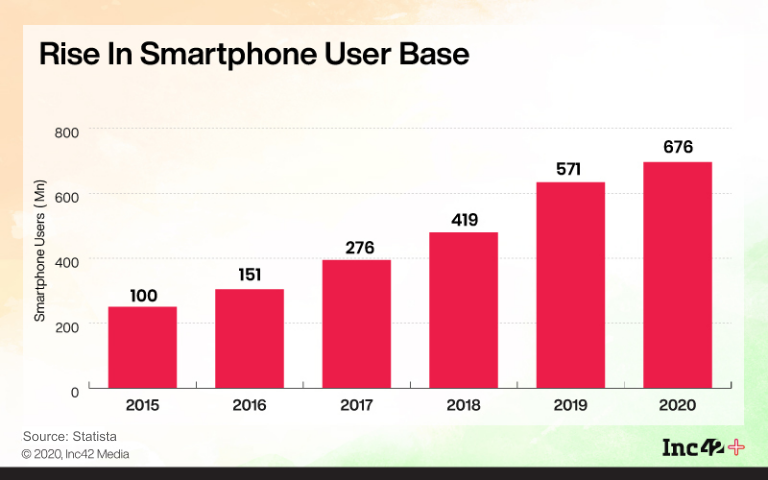 As per the World Bank, in 2018 the manufacturing sector contributed only 15% to India’s total annual GDP, compared to China’s 29% and Bangladesh’s 18%. The policy aims to change this with targeted production of 1 Bn mobile handsets by 2025, valued at $190 Bn, including 600 Mn mobile handsets valued at $110 Bn for export.

According to Datalabs by Inc42, manufacturing and industrial SaaS solutions as well as deeptech products and services will play a pivotal role in advancing the “Make In India” mission seeing as automation and digitisation are key to increasing the overall productivity in manufacturing. Increasing the contribution of the manufacturing sector to the overall Indian GDP should be a major point of action for the government and businesses, as this will directly contribute to digital growth as well. With more and more electronics and parts being manufactured in India, India will get first access to these technologies as has been the case with China for over two decades.

In addition to SMBs in manufacturing, clean energy is another key focus area for Make in India. The Department for Promotion of Industry and Internal Trade (DPIIT) has recently proposed entering into FTAs (free trade agreements) and mining agreement with Latin America and Africa, which are resource-rich countries, particularly lithium and cobalt, which are used for making batteries that constitute close to 40% of electric vehicle cost. With these strategic trade agreements, the cost of the vehicles in the near future is expected to come down, thereby giving a push to the adoption of electric vehicles in the country.

The Various Pieces In The Digital India

Of course, digital economy is not just built around devices that can connect to the Internet at little to no cost. The economy is propped by digital products and services, which is where startups have emerged as the biggest advocate of Digital India. Key sectors such as education, banking & finance, B2B trade and commerce, governance and delivery of essential services, agriculture and others have been transformed by a mix of startup innovation backed by policy push.

Over the years, the Indian MHRD ministry has launched online learning and communication technology initiatives. This includes a massive open online courses platform SWAYAM, national digital library, virtual labs, and more. The more recent National Education Policy 2020 seeks a complete overhaul of the education sector and is expected to finally bring Indian colleges and schools to the 21st century standards maintained by many Western economies.

However, the unequal access to digital infrastructure has restricted how many students can access many of these online resources. According to the 59th review report of the National Digital Literacy Mission (NDLM), around 16 Cr rural households in India do not have access to computers. Also, a nationwide survey of villages conducted by the ministry of rural development in 2017-18, showed that only 47% of Indian households received electricity for more than 12 hours a day.

Perhaps, the most important piece of the Digital India puzzle is India Stack, which is essentially just a collection of open APIs, but it has revolutionised Indian banking and fintech startups. With Aadhaar as its foundational layer, India Stack combined eKYC or digital identity, Aadhaar-enabled payments system, the unified payments interface (UPI) and account aggregator.

Starting with Aadhaar in 2009, India Stack has been fast bridging the gap between Tier 1 India and Tier 2, Tier 3 cities. India Stack, along with Jan Dhan Yojana bank accounts, has been instrumental in bringing digital banking to the many remote parts of India. Thanks to the eKYC and Aadhaar, a slew of fintech companies have found footing in India.

However, the picture is not all rosy, many fintech companies have noted that the fintech regulations in India continue to change every few months making it a somewhat tumultuous business environment. The RBI’s regulatory sandbox may alleviate some of these challenges in the next few years, but there’s still something to be done about the spate of Aadhaar-related data leaks from government bodies, which has soured some of the progress made so far.

How Covid-19 Widened The Digital India & Make In India Vision

Covid-19 has been the ultimate test of all digital systems and infrastructure. While systems like online education and digital payments were already popular sectors when the pandemic hit, other sectors like telemedicine and digital entertainment came to the fore as the nationwide-lockdown was instituted in the country.

Following the pandemic and movement restrictions across the country, hospitals started utilising  ‘e-Sanjeevani OPD’ to offer the audio-visual facility for regular patients and senior citizens to consult with doctors and avoid the hospital. Nationwide lockdown also came as a boon for many telemedicine startups who had been facing regulatory uncertainty for the past four years.

“We have had a lot of regulatory questions for a long time now, suddenly we found ourselves becoming an essential service. That was a big regulatory change for the industry,” said 1mg’s founder Prashant Tandon.

The rising number of patients has also highlighted the need to improve the capacity of ventilators and respiratory aids in Indian hospitals. Seeing the urgent need, Indian startups across sectors also joined in the race to develop low-cost ventilators to save the COVID-19 patients. Along with them, Industry experts like Mahindra, Maruti Suzuki and more have also been helping the tech startups scale their manufacturing operations, which is a key part of Make In India.

Hardware startups contributing to India’s effort against Covid-19 include Noida-based AgVa Healthcare which developed a toaster-sized low-cost ventilator, weighing only 3.5 Kg. Similarly, Bengaluru-based Biodesign Innovation Labs is developing a portable ventilator called RespirAid for less-critical patients, which is ideal for stabilising a patient during a respiratory arrest. All of these are being made in India and contribute to the digital healthcare penetration greatly.

Further, robotics solutions built by Indian startups have supported the public healthcare infrastructure as well. Robots are sharing the workload of frontline staff battling Covid-19 in India. From disinfecting zones, dispensing hand sanitisers to monitoring patients and also serving meals and medicines — more and more hospitals are deploying automated solutions for these tasks.

Perhaps the most controversial part of India’s fight against Covid-19 was the Aargoya Setu app. Launched in April 2020, Aarogya Setu is the government’s contact tracing solution. It is said to have garnered 15 Cr downloads till now (August 2020). However, its mandatory usage and privacy concerns have also been raised by many as well as its potential use for mass surveillance.

In the past couple of months, the focus has fallen on Indian software products. Perhaps the biggest acknowledgment of India’s digital ambitions came with the ban on over 100 Chinese apps, which brought the digital economy into the geopolitical battle. The Chinese app ban was followed by Modi’s clarion call for Vocal for Local and Atmanirbhar Bharat, which has flooded the India app ecosystem with hundreds of new apps in a matter of months. Interestingly, most of these apps have noted their ‘Made In India’ tag as the differentiating factor in the market. While so far the focus has been on manufacturing goods and products in India, the new wave of Indian apps is perhaps the best example of how Make in India and Digital India are interconnected.