Startup Watchlist: 10 Agritech Startups To Look Out For In 2019

Some startups that made the cut are AgroStar, Ninjacart, Crofarm, Bombay Hemp Company, and Stellapps

This article is part of Inc42’s Startup Watchlist, an annual series in which we list the top startups to watch out for in 2019 from industries such as agritech, AI, logistics, healthtech, and more. Explore all the stories from the ‘Startup Watchlist’ series here.

Agriculture and India share a unique bond. From the sunny wheat-laden farms of Punjab to the windy rice paddy fields of Tamil Nadu, a tropical climate and fecund, mineral-laden land have aided agriculture to flourish in India from time immemorial. In fact, farming is the foundation on which the Indian subcontinent was able to birth its rich civilisations.

However, in recent years, with global warming and depleting water resources to feed the fields, yields from farming lands in India have been dwindling. For example, though India is the largest producer of pulses in the world, the pulse crop yield (659 kg/ha) was the lowest among BRICS countries in 2014.

Faced with falling productivity and incomes and burdened with debt, farmers are committing suicide by the thousands. Besides, given India’s ever-rising population, there is a pressing need to boost agricultural productivity in a sustainable way. Technology, which is the key to all things disruption, is also getting fast intertwined with agriculture as a number of agritech startups are coming up to solve India’s farming-related problems.

According to Inc42 Datalabs, the total funding in Agritech startups in India has grown from $46.1 Mn 2017 to $66.6 Mn in 2018 which gives us an idea of the growing appetite of investors and their belief in the potential of agritech in India; it also showcases the businesses opportunities in the agriculture sector for agro-based industries in the country.

With the BJP-led government having picked digitisation as one of the core tenets of its term, the last four years have been marked by various digital and egovernance initiatives. One such move has been the setting up of the National Agriculture Market (eNAM), a pan-India electronic trading portal intended to create a unified national market for agricultural commodities which aims to eliminate middlemen and help farmers realise better prices for their produce.

But, despite such measures, there is a huge gap that exists between production, along with issues related to adequately producing and storing crops and procurement, meaning that farmers are still not able to get fair pricing for their produce. They have made sure to let the government know that they are not happy by taking out marches to New Delhi and elsewhere as a mark of protest.

Politics aside, the current scenario represents a huge opportunity for agriculture startups in India to come up with solutions. As Mark Kahn of venture capital firm Omnivore puts it — “the opportunity involves feeding 1/6th of humanity.” This refers to India’s 1.3 Bn population.

Given the importance of the agricultural sector and the disruption it is witnessing, it is Inc42’s responsibility to keep track of the developments in the segment. We have also been keeping a hawk’s eye on the existing and upcoming agritech startups in India. Here are some agritech startups to watch out this year: 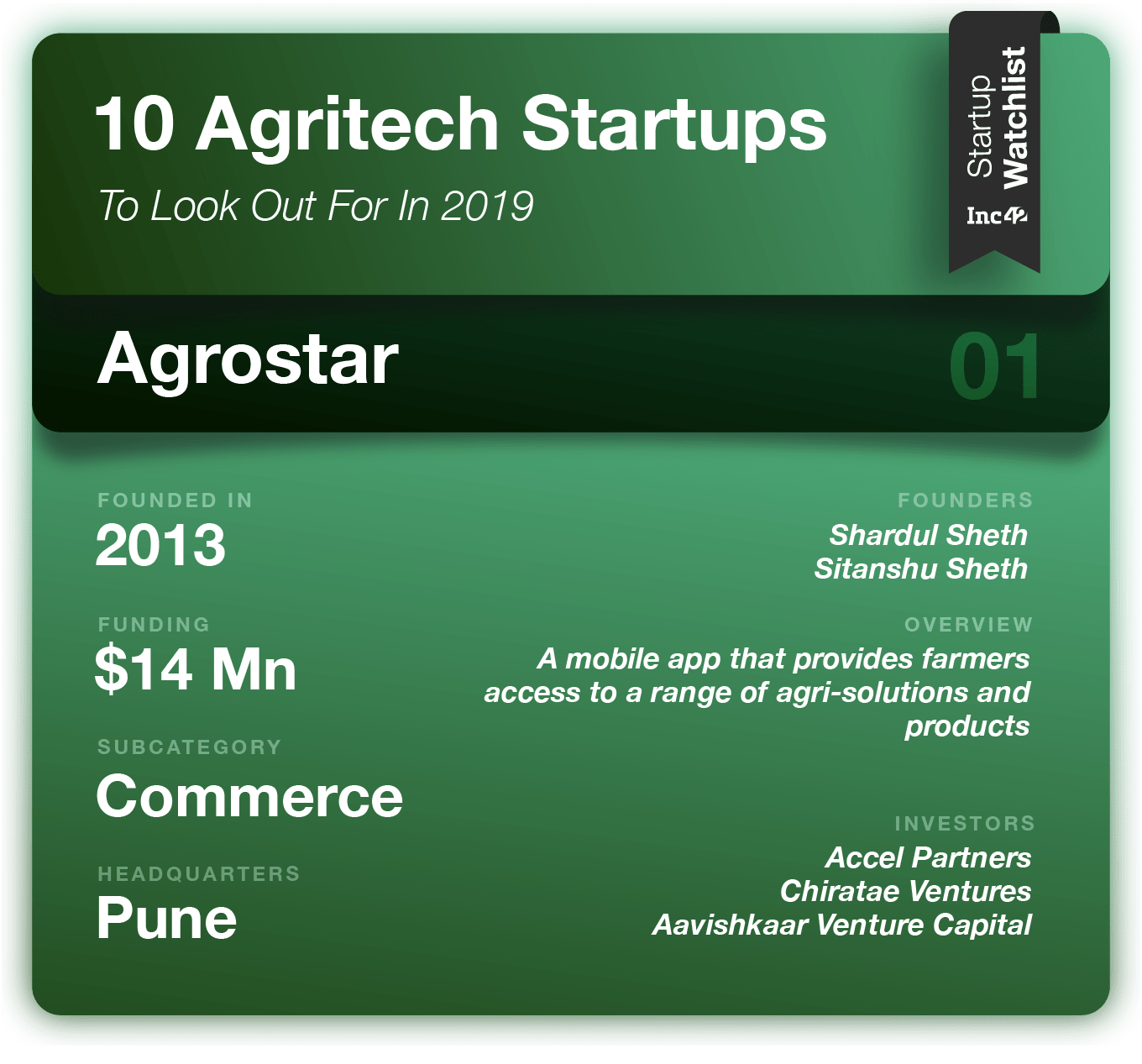 AgroStar, a Pune-based m-commerce startup that sells agricultural inputs directly to farmers,  has established itself as one of the leaders in the agritech space in India especially after it raised the highest funding for an agritech startup in the country In 2017.

AgroStar, which aims to scale its services across India, is trying to solve the last-mile logistics problem in rural India so as to enable better delivery of services. It has boosted the deliveries done by its own field team (as against using an intermediary like India Post) to make sure the packages are delivered on time.

AgroStar has covered more than 2,300 pincodes, which means more than 25,000 villages of Gujarat, Rajasthan, and Maharashtra. 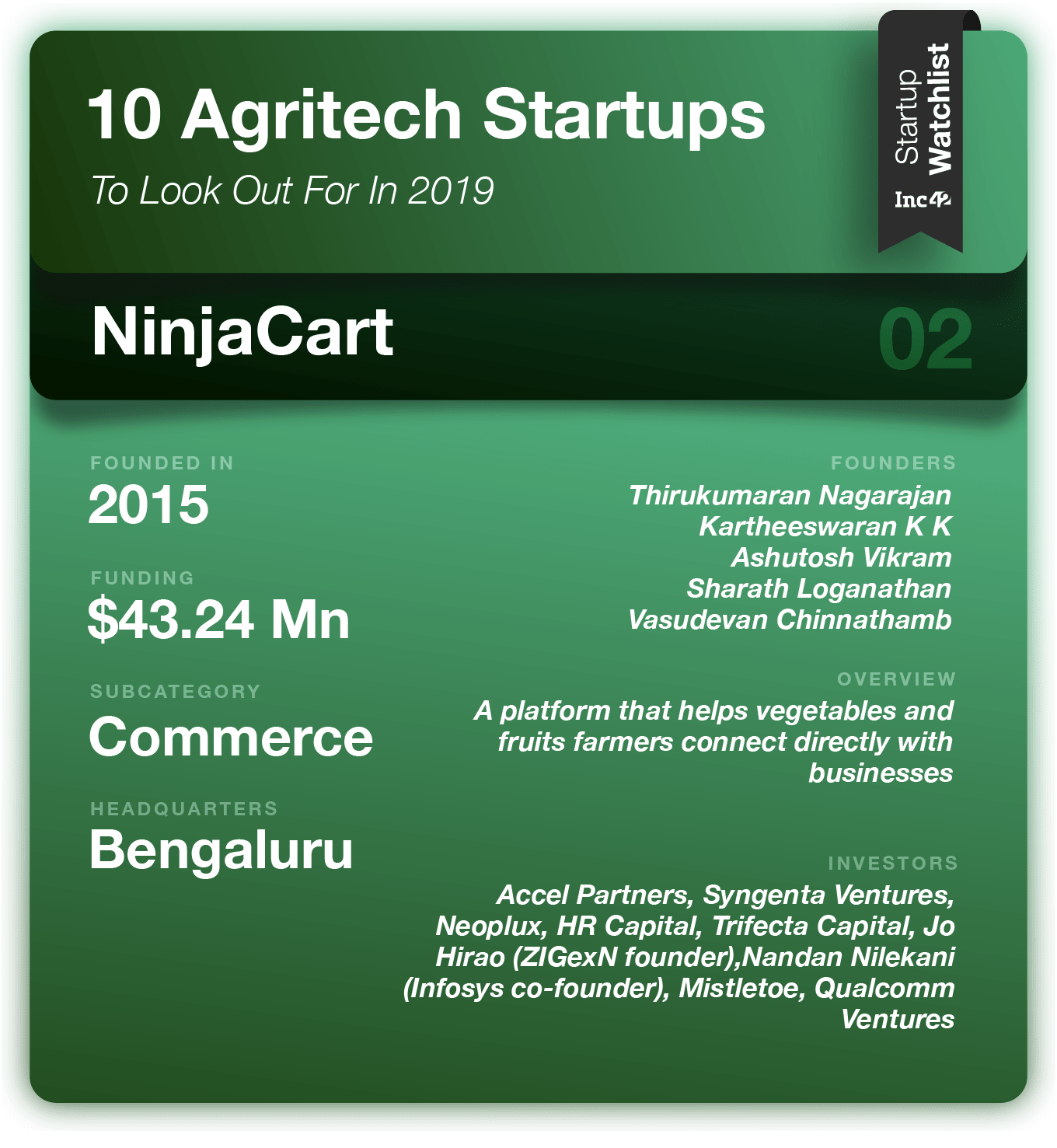 NinjaCart, a marketing and delivery platform for agricultural produce, raised $34.6 Mn (INR 250 Cr) in a Series B funding round in 2018 with the intention of expanding to different geographies and doubling down on its supply chain infrastructure.

NinjaCart connects farmers to end retailers such as grocery stores, supermarkets, and restaurants which buy fruits and vegetables. The startup also manages a logistics network, enabling the pickup and drop of produce.

The Bengaluru-based startup has a sourcing network of more than 3,000 farmers across south India and transports fresh produce from farm to about 4,000 retailers in less than 12 hours of picking on a daily basis.

NinjaCart primarily operates in Bengaluru, Chennai, and Hyderabad with a team of more than 750 people. 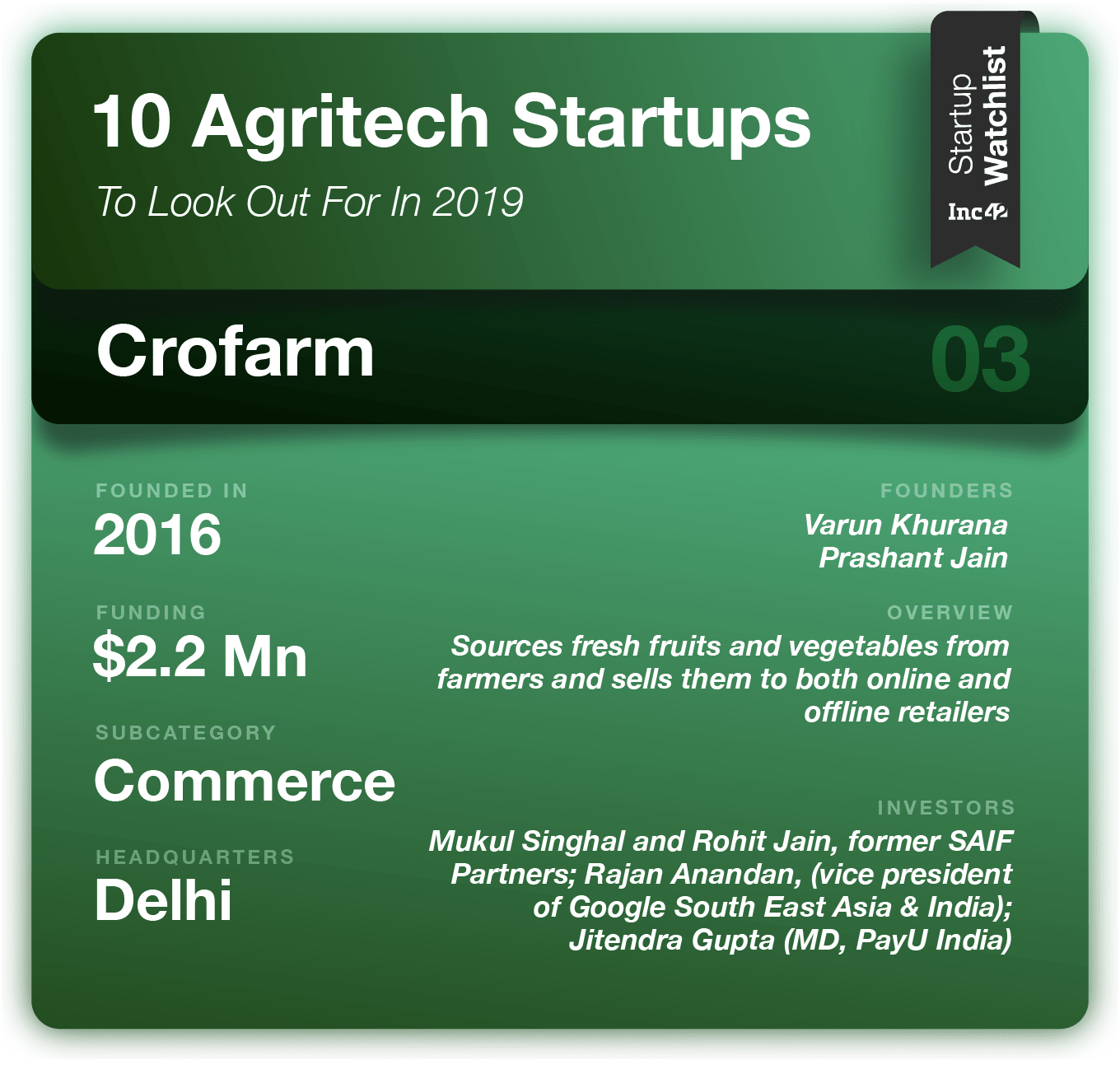 Agriculture supply chain startup Crofarm, founded in 2016, buys fresh fruits and vegetables directly from farmers and supplies them to online and offline retailers.

Crofarm services more than 100 small and medium retailers through its multiple distribution centres and claims wastage of less than 5% in its supply chain as compared to average wastage of 50% in fruits and vegetables throughout the supply chain in the country.

Crofarm primarily operates in Delhi-NCR and has a network of farmers across UP, Haryana, and Delhi. The startup hopes to reduce the menace of middlemen and streamline processes in the agricultural sector, which is largely unorganised. 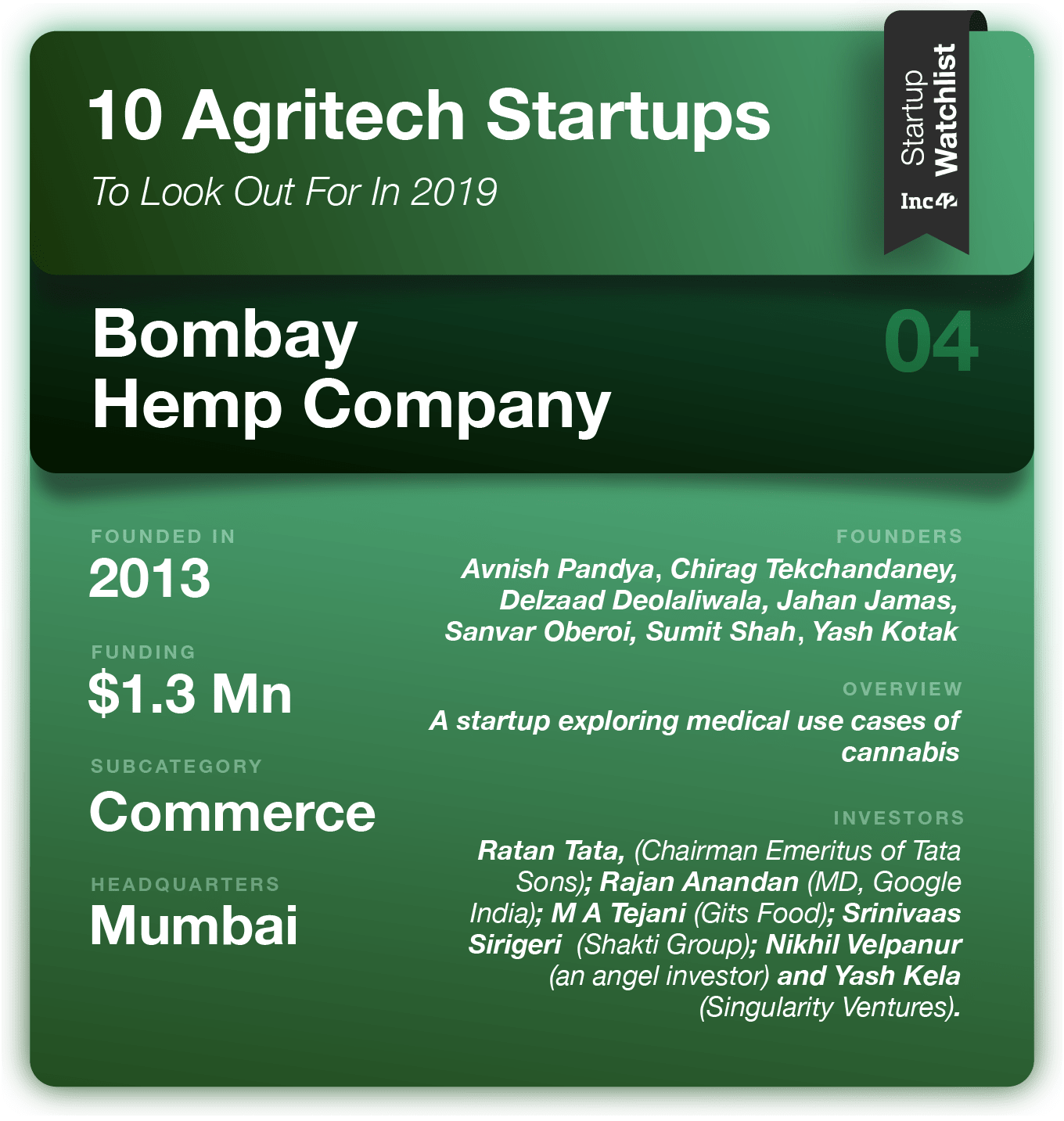 Following the global trend world of exploring the medicinal benefits of cannabis, the Bombay Hemp Company is carrying out R&D, product development, and market creation for cannabis products. The Indian startup is working on everything from hemp clothes to R&D of medicines related to the treatment of breast cancer and epilepsy.

The startup has also partnered with the Council of Scientific and Industrial Research (CSIR) for medical research on cannabis. 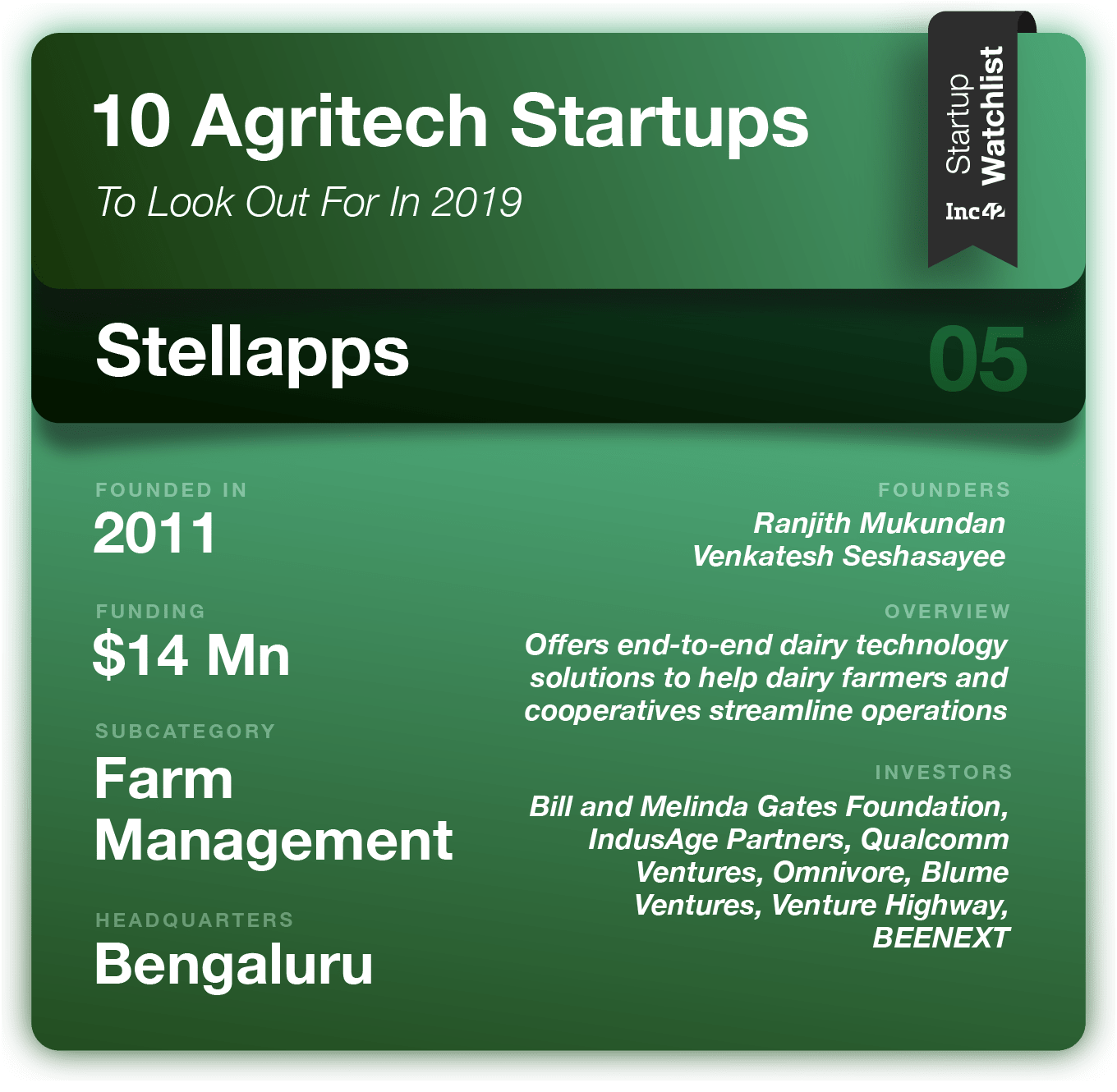 Stellapps, an Internet of Things (IoT) startup that operates in the dairy space, had a good run in 2018, wherein not only did it raise funds but also got the prestigious Bill and Melinda Gates Foundation on board as an investor.

Stellapps, which was initially incubated at the rural technology business incubator in IIT Madras, monitors the quantity and quality of milk, storage facilities, creates wearable devices for tracking cattle health, and provides infrastructure for housing cattle.

The startup does this by using technology such as IoT and data analytics while acquiring data via sensors that are embedded in milking systems, animal wearables, etc. 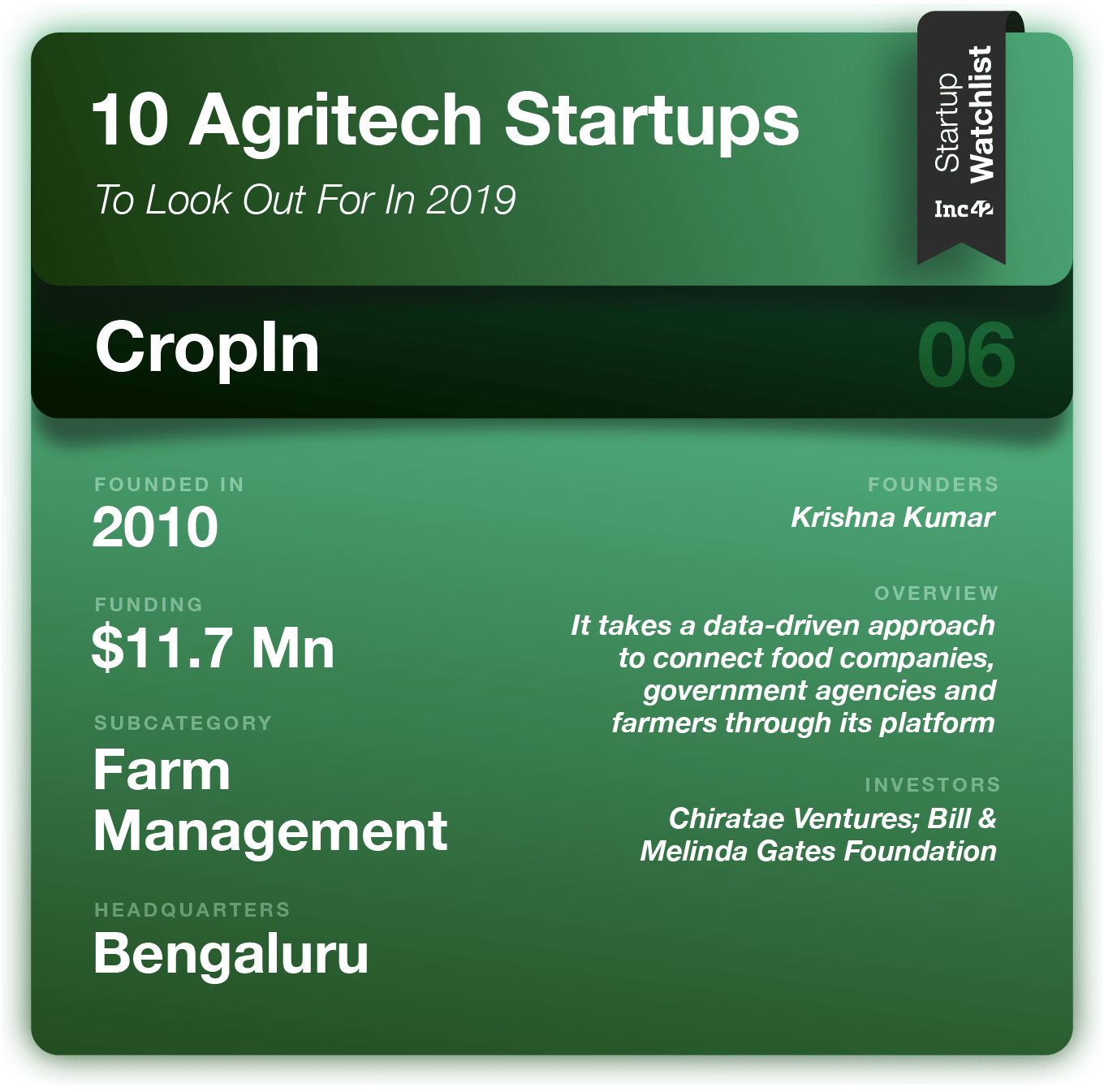 Bengaluru-based CropIn’s flagship product, SmartFarm, enables big companies to map out the supply chain as well as provide real-time updates on sowing, weather patterns, pests, etc, to companies as well as farmers who have smartphones and internet connectivity.

From crop planting to harvesting, SmartFarm monitors the field and weather and, based on that, sends an action plan to the farmer.

Cropin is also working with the Karnataka government to digitise farmer producer organisations and with the Bihar and Madhya Pradesh governments on the climate resiliency programme to help farmers fight climate change. 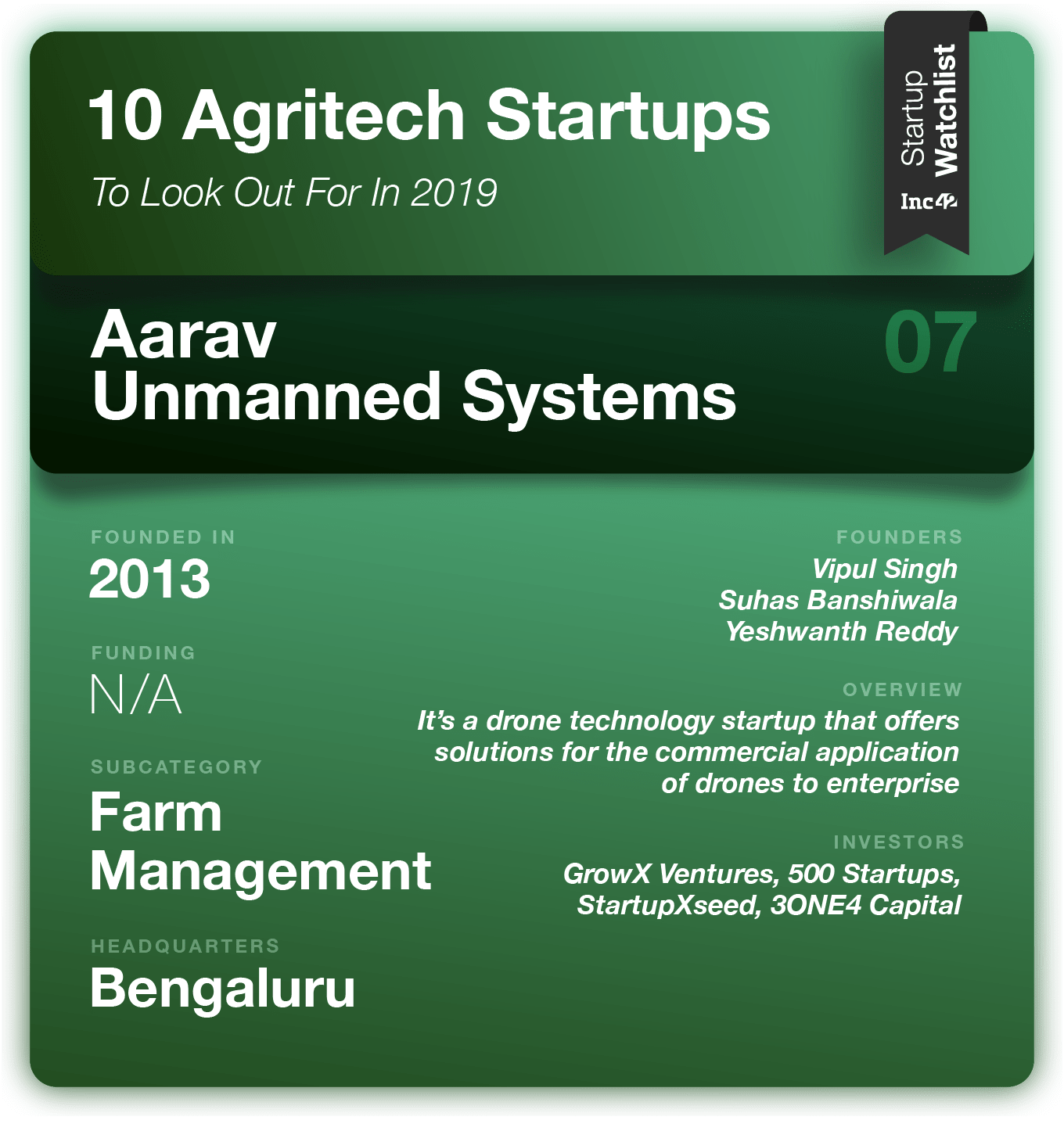 Bengaluru-based Aarav Unmanned Systems (AUS) has developed its own commercial-grade drones with the first indigenous PPK-enabled drone — INSIGHT-PPK — in India. According to the founders, the PPK drone is three times more accurate and two times faster than most commonly used solutions available in the market.

The startup, which raised an undisclosed amount in a Pre-Series A funding round in 2018, provides accurate 3D representations of the terrain surface which can transform and change the way decisions are made in agriculture.

In March 2017, AUS said that it saw a six-fold growth in its revenues over the previous year. 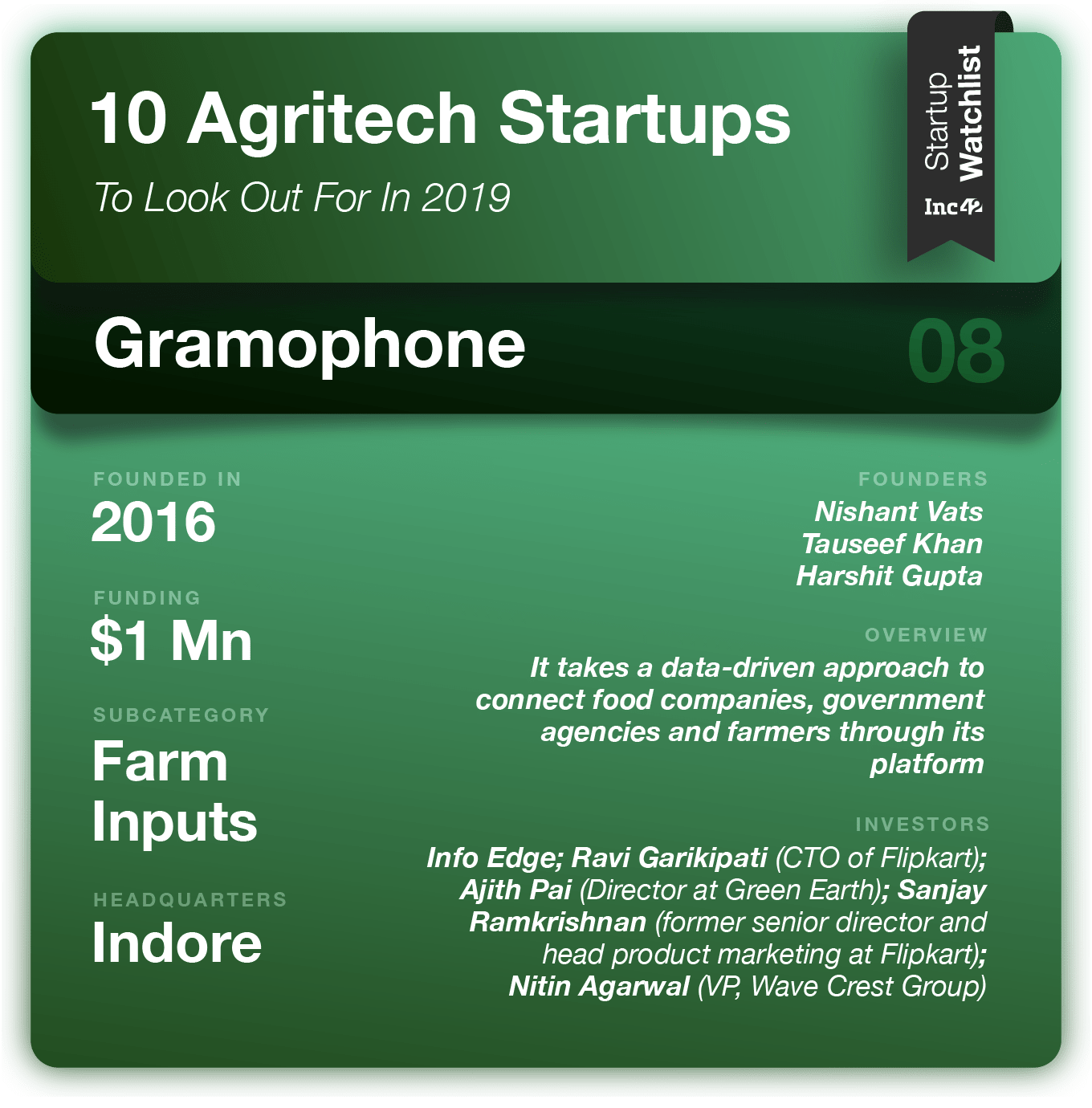 Indore-based agritech startup Gramophone, started by IIT Kharagpur graduates Nishant Vats and Tauseef Khan, is a one-stop solution for all kinds of inputs on farming. The startup provides assistance to farmers via its toll-free helpline number — farmers can contact them by just giving a missed call and can get solutions to all farming-related problems.

They can also buy agricultural products such as seeds, crop protection, nutrition, etc, directly from the company’s mcommerce platform. 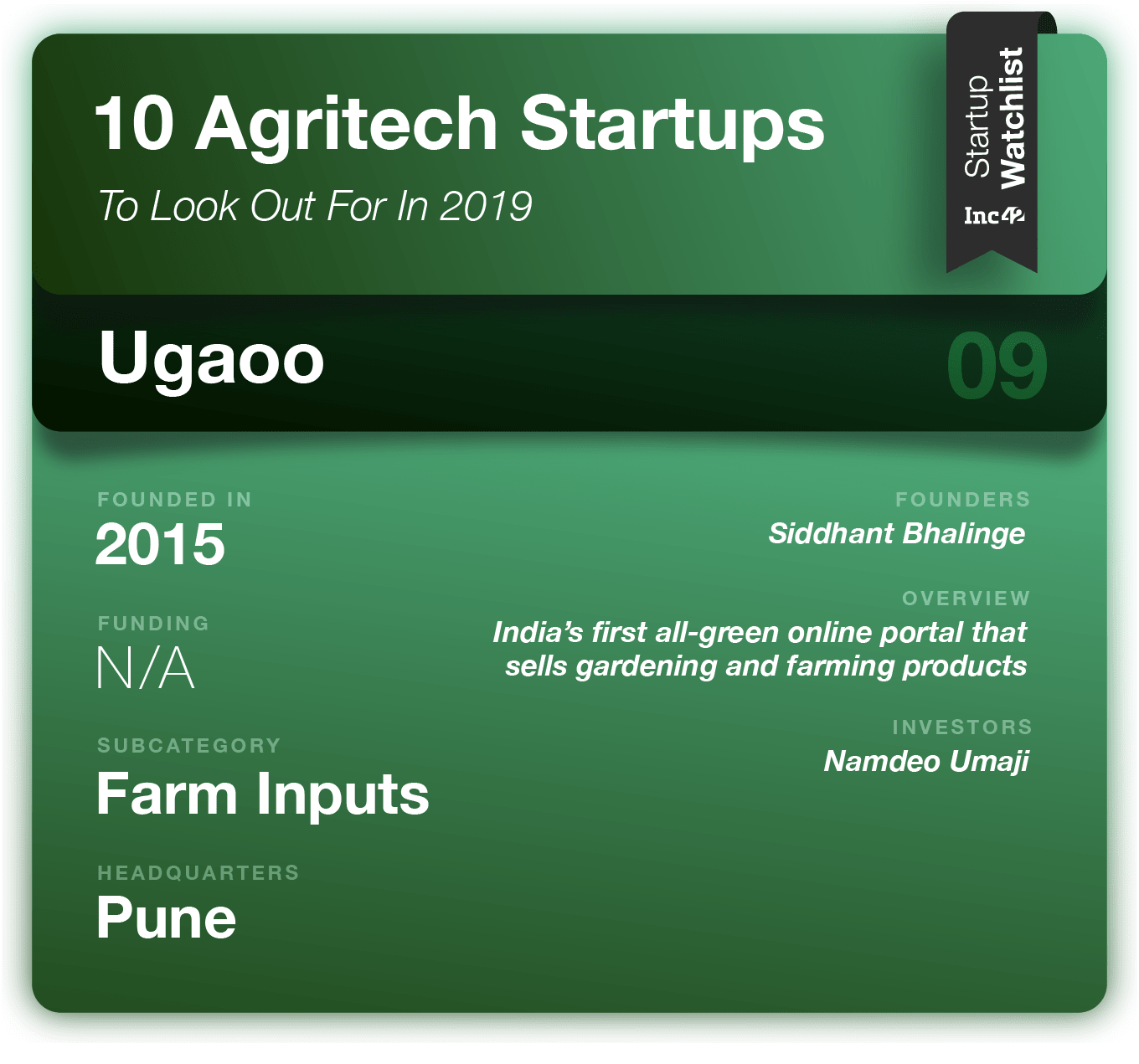 ugaoo.com is a gardening and farming platform launched in late 2015 that focuses on the gardening and landscaping market. The startup has been working closely with farmers and provides them with high-quality organic seeds, among other products, through its online platform.

It is reaching out to consumers in Tier 2 cities like Surat, Nashik, and Kochi to tap into the growing market potential in these cities. It targets farmers who have been exposed to the latest technology and are familiar with using apps. 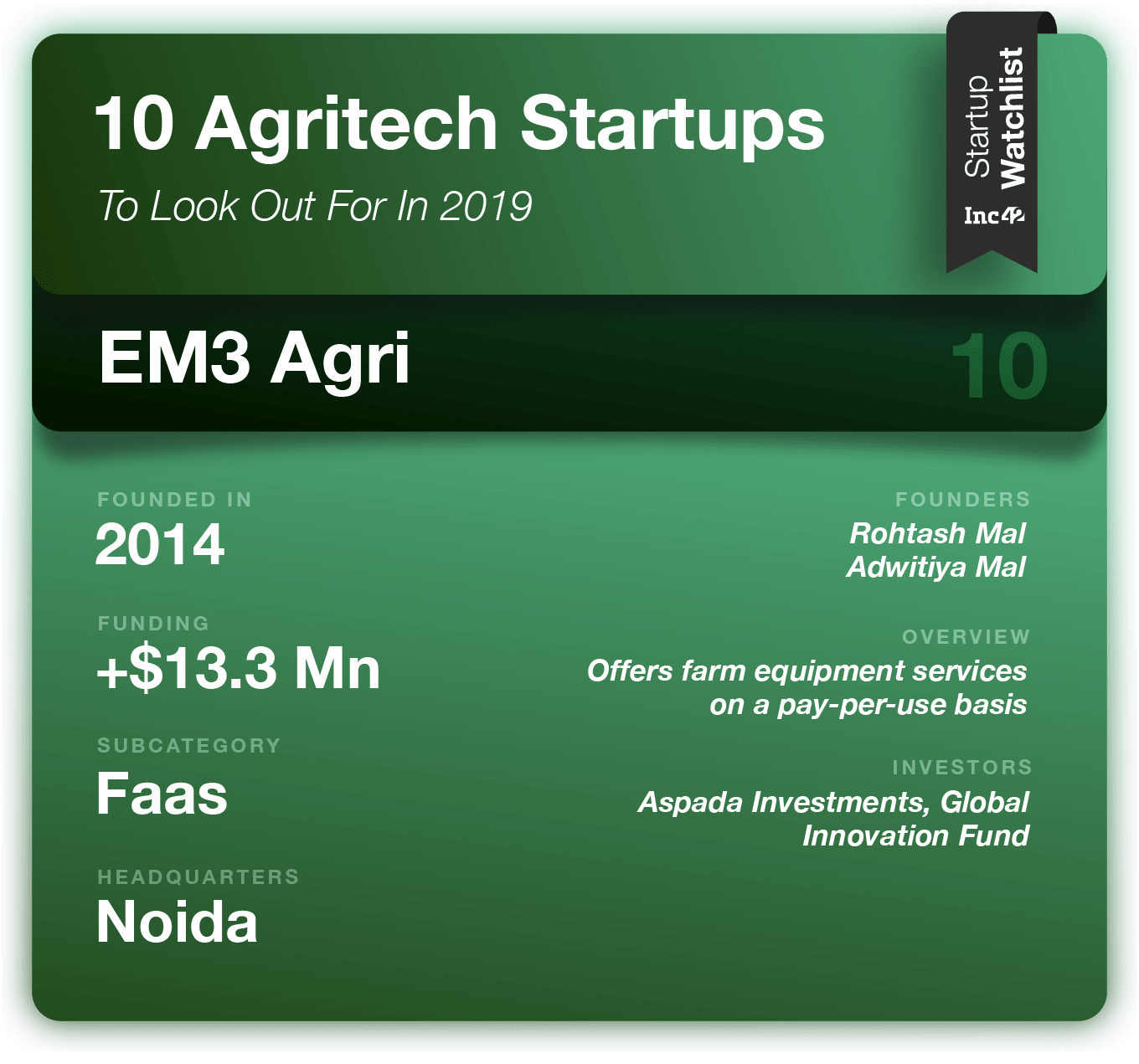 EM3 has partnered with the Rajasthan government to offer smallholder farmers access to capital equipment, such as tractors, harvesters, and advanced farm implements.

In 2017, it secured a $10 Mn Series B funding from the UK-based Global Innovation Fund (GIF) and existing investor Aspada Investments.

While these are the Indian agritech startups to watch out for in 2019, stay tuned for the next edition of Inc42’s Startup Watchlist, in which we will be featuring Indian Media & Entertainment startups that will make it big in 2019. Click here for more stories!