In our most anticipated endeavour to bring the highlights of the passing year, 2015, here is another dope for you. This time, we have a collated list of all the acquisitions that were made in the startup ecosystem.

The most looked upon the deal of the year was Snapdeal’s ‘Dil Ki Deal’ with Freecharge, which added a new feather to Snapdeal’s spectrum of services. It was estimated that the deal size was about $400 Mn. Apart from Freecharge, Snapdeal also acquired  mobility solutions company Letsgomo Labs, mcommerce platform startup – MartMobi, digital financial distribution platform – RupeePower and reportedly acquired ecommerce management startup – Unicommerce.

Zipdial’s acquisition by Twitter was also among the most talked about deal of the year. Twitter reportedly put about $30-$40 Mn to acquire this Bangalore-based startup.

Another big acquisition was of Taxiforsure, which was acquired by Ola for over $200 Mn.

On the other side, the most anticipated and heart throbbing deals in the startup community were those of CommonFloor-Quikr and Oyo-Zo Rooms for which formal announcements are yet to come. So, this puts us in speculation for 2016, that whether the year will begin with a blockbuster deal or we will still have to wait and watch what roads are taken.

Till then, here is the complete list of startups that got acquired in 2015:

*As of 22nd December

There were around 18 SaaS-based startups that got acquired during the course of time, this was closely followed by ecommerce and mobile verticals. As the demand for smartphone and internet penetration increases, around 12 ecommerce and 13 startups in the mobile space turned out to be a lucrative deal for acquirer’s. Besides, 9 startups got acquired in Edtech, and 9 in Logistics & Hyperlocal delivery space (combined), 8 startups in Real Estate domain, and around 5 startups in Healthcare & Healthtech combined. 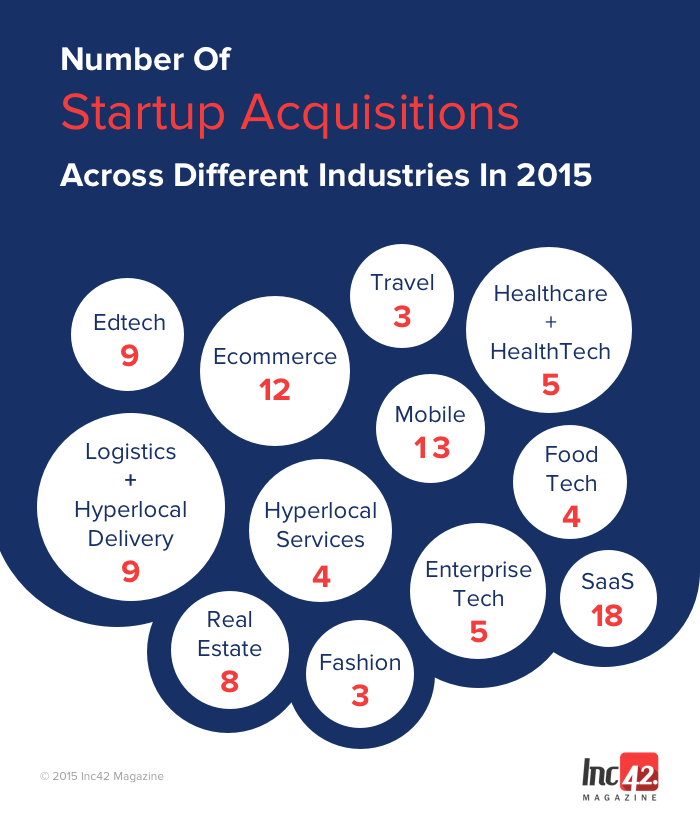 Although, we have been very careful in compiling the list of acquired startups in the tech space, we would await your comments to tell us about any other acquisition that made way this year.