The Bengaluru-based fintech company is looking to raise INR 4,020 Cr ($530 Mn) through the IPO

Having turned profitable during the FY2021, Navi had to spend heavily to see growth in FY22 and has reported a loss in the first nine months

Navi is heavily dependent on revenue from lending to sustain itself, but its AMC business has shown encouraging growth in the past year

At a time when most Indian tech stocks are seeing big dips, Sachin Bansal-led fintech startup Navi Technologies is lining up to join the public markets. Navi became the latest Indian startup to file its draft red herring prospectus (DRHP) ahead of its IPO. The Navi IPO will undoubtedly be keenly watched by everyone in the startup and tech ecosystem, given that Bansal has been such a key figure in the Indian startup story.

The company’s plans to go public comes despite its inability to acquire an universal banking licence application, which has been in the works since 2018. While the plans for the banking licence will undoubtedly be ticking away in the background, Bansal is now tasked with proving the company’s value as a worth investment for public market investors, which may prove to be a tall task in the current climate.

So what exactly is Navi banking on as it goes for a public listing? Here’s what we can find from the DRHP:

The Bengaluru-based fintech company is looking to raise INR 4,020 Cr ($530 Mn) through the IPO. The DRHP states it will attempt to raise INR 3,350 Cr via a fresh issue of equity, besides and another INR 670 Cr is likely to be raised in a pre-IPO round, which will reduce the size of the fresh issue.

Navi has appointed Axis Capital, BofA Securities, Credit Suisse, Edelweiss and ICICI Securities as the book-running managers for the issue.

Much of the attention around the IPO will be due to the fact that Bansal has been such a pivotal figure in the Indian tech story, and with Navi, his second innings after the Flipkart exit, he’s once again attempting to create a $100 Bn business. Besides Bansal, the company has built an interesting board which features some veterans from the Indian banking industry. This is just a hint of Navi’s larger ambitions.

The funds raised will be used to invest INR 2,370 Cr in Navi Finserv (NFPL) and another INR 150 Cr in Navi General Insurance Limited (NGIL). The rest of the amount has been saved for use in general corporate purposes.

Founded by Bansal and his former Flipkart colleague Ankit Agarwal in 2018, Navi operates in lending, general insurance, mutual funds and microfinance. Navi offers health insurance cover ranging from INR 2 Lakh to INR 1 Cr for individuals and families. It also launched a monthly subscription insurance product instead of the usual annual policies that most insurance providers offer, with these policies starting at INR 240 per month. 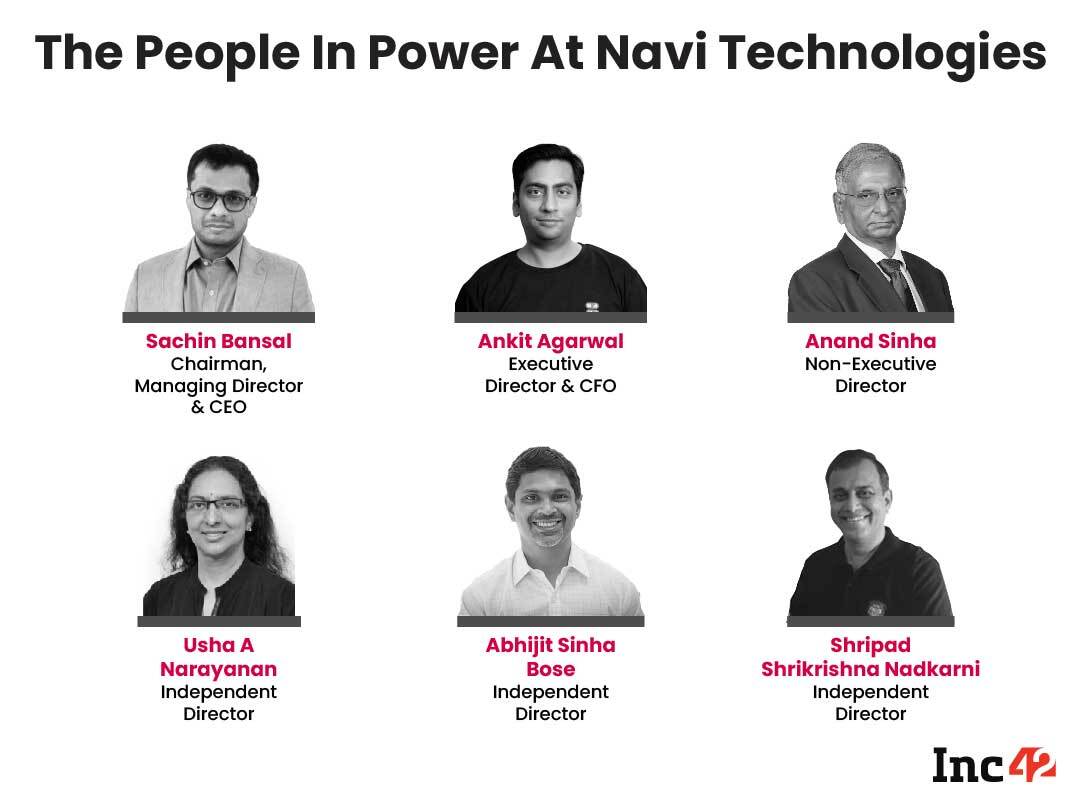 Further, Bansal, who has already invested around INR 4,000 Cr in Navi till date, will not be diluting his stake in the IPO, but his stake could lower in the pre-IPO round, depending on the terms. Navi’s other cofounder Ankit Agarwal holds 0.98% stake in the company as of the date of DRHP.

Both are key members of the company and are part of the board. The other board members include veterans from the BFSI space and big names from the tech industry such as Bank Of Baroda’s Usha A Narayanan, WhatsApp India chief Abhijit Bose, former RBI deputy director Anand Sinha, and Shripad Nadkarni, angel investor and founder of Maverix Platforms.

Navi is now the youngest startup in India to look at public markets to raise capital. Only four years since launch, the company is clearly bullish about its ability to raise funds from the public market. An Inc42 analysis showed that the average age taken by Indian startups to go public in 2021 was 15.3 years, while globally the median age of tech startups that went public in 2021 is 12 years.

Going From Profit To Loss

Having turned profitable during the FY2021, the expectation was that Navi might have found the secret to getting the unit economics right. The company had posted a profit of INR 71.2 Cr in FY21, on a base of a total income of INR 780 Cr, but Navi had to increase its spending considerably to see revenue growth. For nine months in FY22, ending December 2021, the company generated a total income of INR 719.4 Cr with a loss of INR 247 Cr. 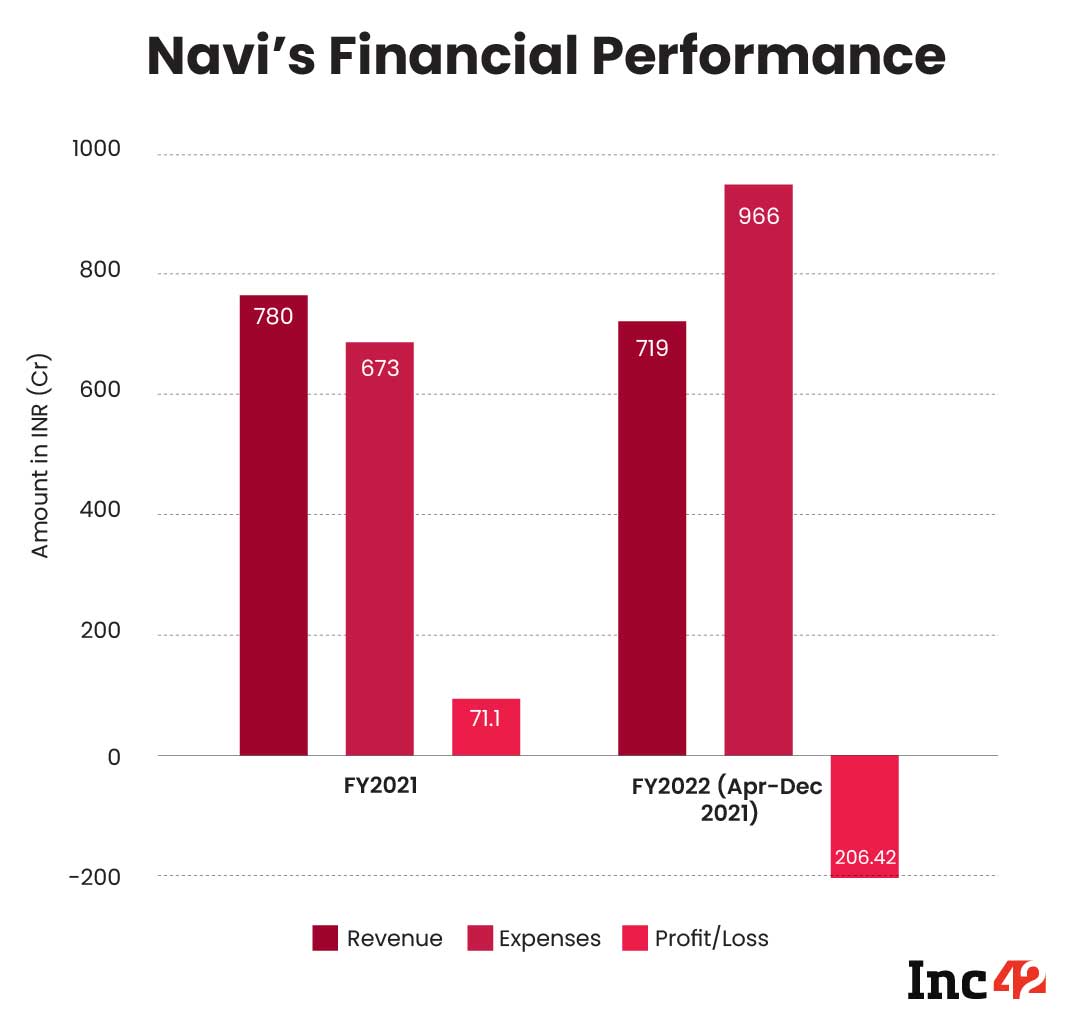 A majority of the revenue (44%) comes from income from personal and housing loans, while the microfinance business for SMB lending, run via Chaitanya India Fin Credit Pvt Ltd brought in 32.5% of the annual income. This is means over 75% of the revenue comes from the lending vertical. 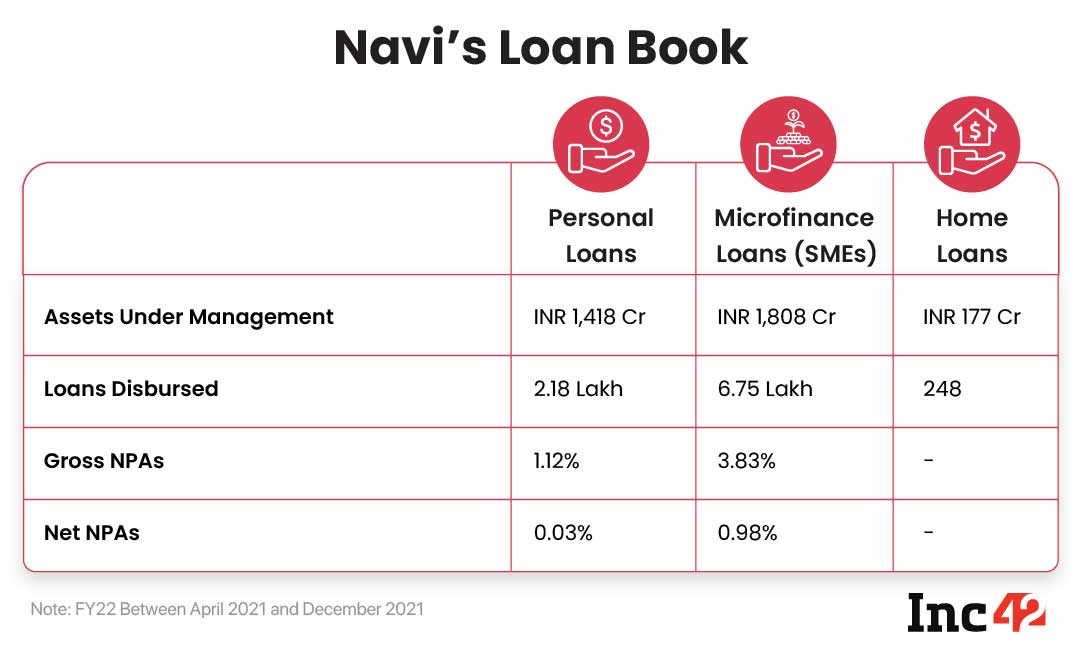 Of the three separate loan segments, microfinance loans for small and medium businesses has seen the most number of disbursals, but this is also the segment that has been more risky for Navi, with a gross non-performing asset rate of nearly 4% and a net NPA figure of nearly 1%, which comes up to roughly 18 Cr of risky loans.

As we can see in the breakdown of total income though, Navi is heavily dependent on revenue from lending to sustain itself. 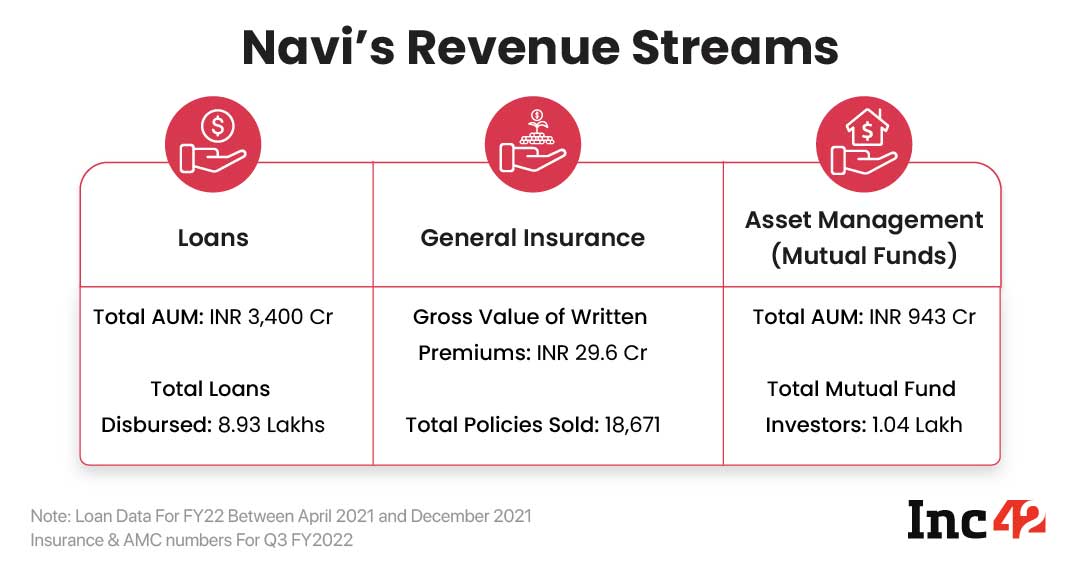 For FY21, Navi earned 19.73% gross direct premium income through its health insurance product, which grew to 28.20% for the nine-month period ending December 31, 2021.

The other vertical that has shown promise for Navi in the past year has been the AMC business, where it has launched several new products. As India’s investors look for unique MF options, Navi is capitalising with differentiated products.

In its DRHP, the company claims that it plans to expand its product portfolio by launching adjacent lending and insurance products to capture a larger share of the BFSI spending on the consumer front.

The Depth Of Navi’s Model

In past analysis of Navi’s business model and Bansal’s $100 Bn ambition, we discussed how whether it is DHFL General Insurance or Essel Mutual Funds, the acquisitions at Navi have been operations-centric in nature, and not about their brand value. These entities do not have a huge user base or the technology that Navi wants to build a digital-first NFSI giant. 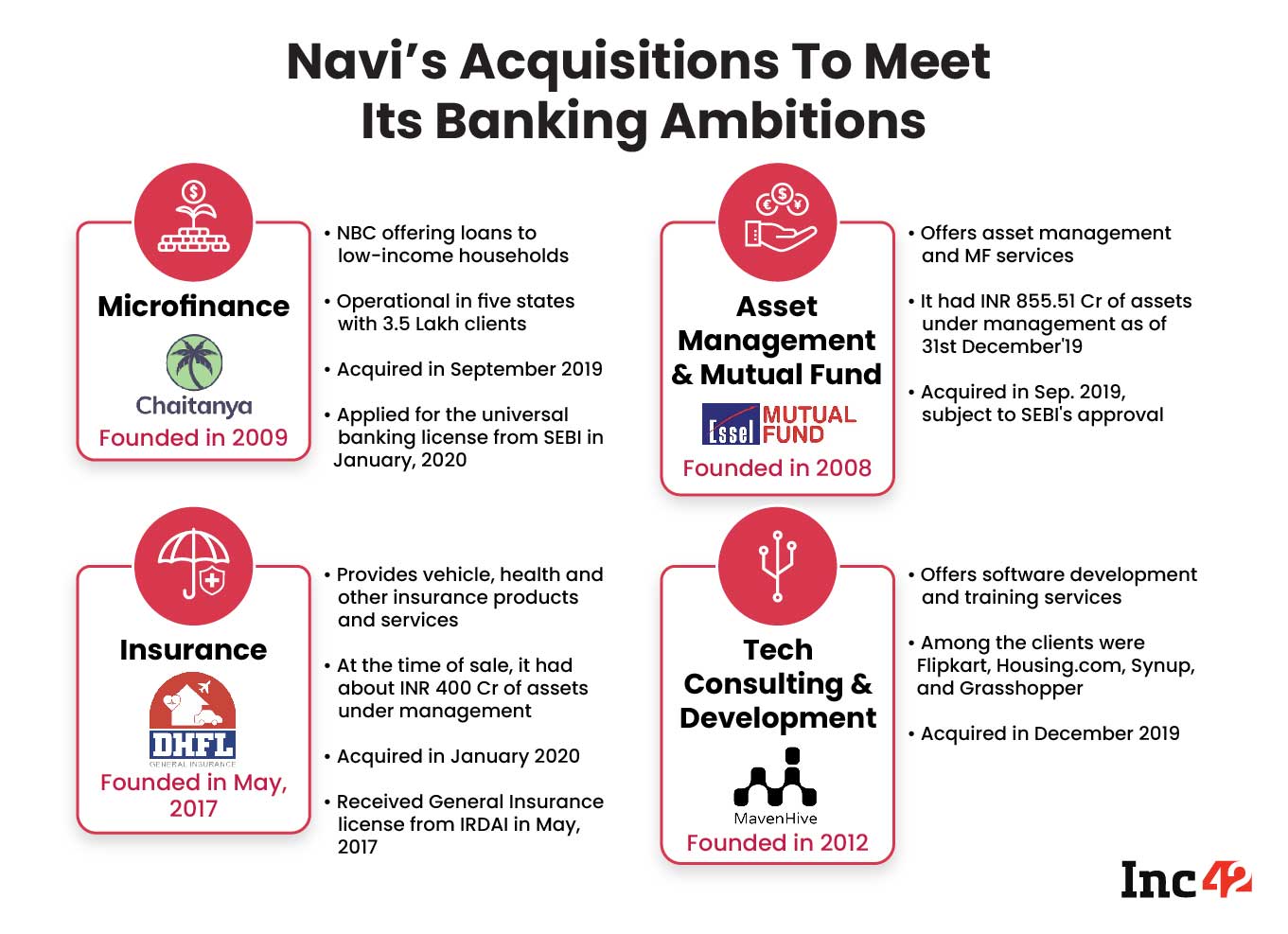 Of the many entities under Navi’s umbrella, Navi Finserv is a key cog in the current state of things, seeing as it functions as a non-banking financial corporation (NBFC). NFPL has a gross asset under management (AUM) of INR 1,596.4 Cr as of December 31, 2021. This is the company that disburses loans with over 4.8 Lakh loan accounts as per the filings.

With the IPO, Bansal will be looking to more than double the AUM and loan book of Navi Finserv, and its loans and lending business, which as we have seen is central to the revenue model of the company currently. The company aspires to build an INR 15,000 Cr loan book in the next 18 months.

The dependency on loans could be a critical factor for Navi in the short term as it will allow it to expand its customer base rapidly given the growth in the lending segment, but the company has to be sharp on the other verticals too, at least till the time it can lay claim to a universal banking licence.

Of course, Bansal’s strategy could very well be based around going public, earning the trust of regulators and then look for a banking licence. In the BFSI sector, trust is the key factor, above all. Traditionally, banks have enjoyed greater trust by default, but things have changed now after years of non-performing assets piling up and banks seeing scams and defaults, including moratoriums and embargoes on the likes of YES Bank and HDFC.

There is always a lot of concern about the sustainability of new BFSI companies. So perhaps Bansal and Navi are looking to clear one trust hurdle by going public, before taking on the challenge of becoming a bank.