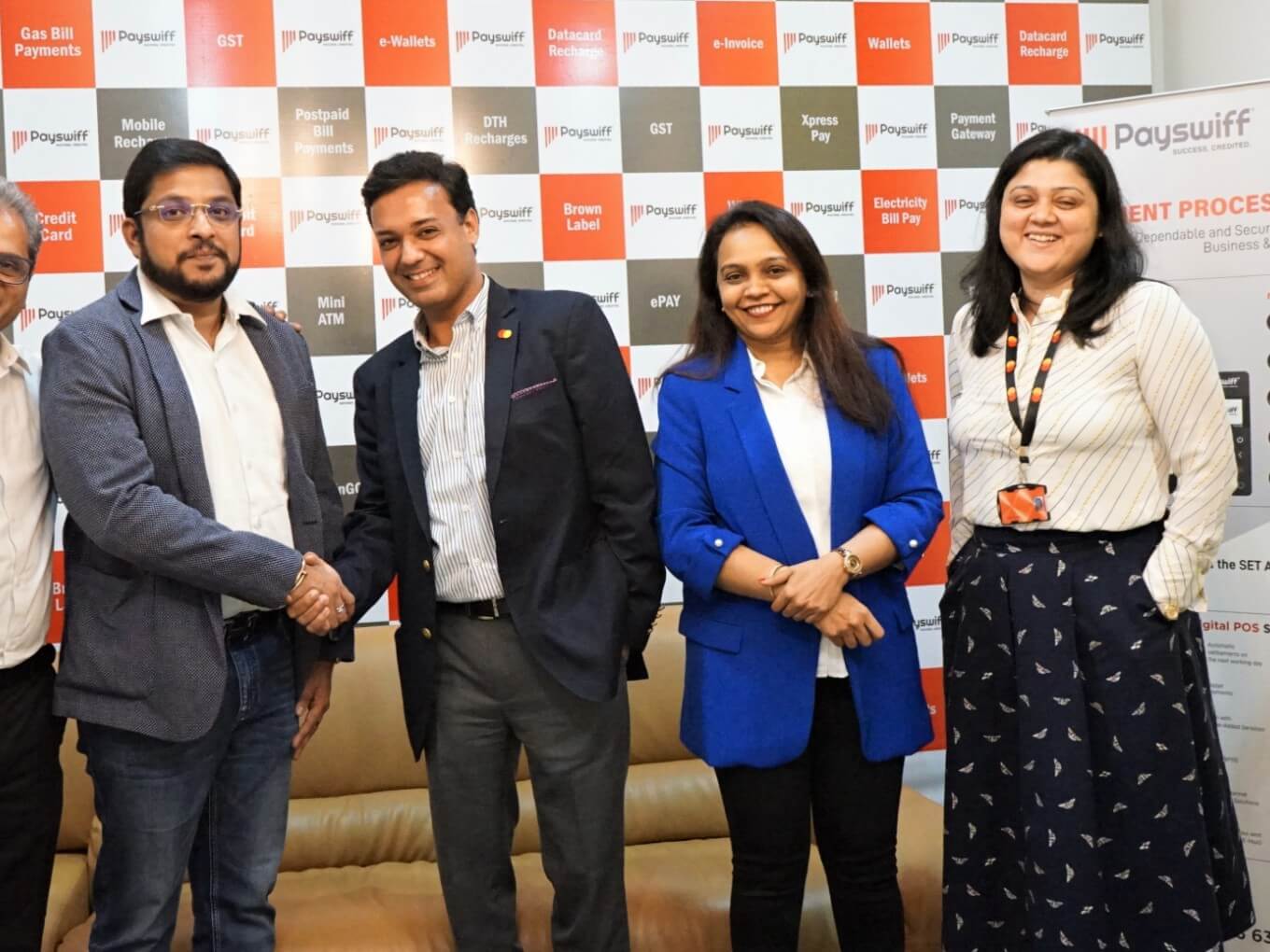 Low-cost, easy to use solution to make merchant onboarding quick and completely paperless

With an aim to ensure a multifaceted distribution strategy to ensure last mile fintech reach in Tier 2, 3 and 4 cities in India, Hyderabad-based fintech company Payswiff and Mastercard have entered into a partnership. The strategic alliance will cut across non-traditional distribution channels to promote low-cost digital payments acceptance solutions beyond the top eight cities in the country.

The partners believe that this will hugely benefit the micro-merchants in small cities as they will be able to unlock additional revenue streams using embedded features in the app such as mobile recharges, utility bill payments, and bus ticketing etc.

Formerly Paynear Solutions (rebranded in December 2017), Payswiff was launched in 2013 by Prabhu Ram, Priti Shah, Ravi Kiran, Anil Bharadwaj, Krishna Kishore and Maulik Shah. It offers an omnichannel payment solutions platform that can be operated through a single application. It enables merchants, ISOs and banks to accept payments through point-of-sale (POS) terminals, app-based or any new-age payment solutions.

With this alliance, Payswiff has also marked the official launch of its new application, Payswiff’s SET. The application was running in beta since last three months and has more than 30K merchants onboard so far, told Shah to Inc42, in a recent conversation. The application allows individuals and business owners to accept payments using more than 60 payment options, including credit cards and debit cards, e-wallets, e-payment links, UPI, Bharat QR, multi-bank EMI, etc.

“While UPI is more popular it has certain limitations when it comes to card payment. At present, it is only available on the RuPay card. The rest of the companies Visa/ Master/ Amex can easily opt for BharatQR. As part of our initiative to increase digital inclusion in the country, we are looking to offer every available option to the merchants to ease their digital onboarding process,” added Bharadwaj.

The SET application can be downloaded on the Google Play Store as well on Apple’s App Store. The platform is multi-lingual and can be ported and deployed rapidly in the new international geographies. Payswiff SET offers paperless merchant onboarding in less than 15 minutes on all Point-of-Sale (PoS) devices, as claimed by the company.

Payswiff: Rising High In The POS Landscape Of India

With over 1.5 Lakh devices deployed with merchants in the enterprise and SMB (Small and Medium Business) space, Payswiff has a network of more than 450 associates in 12 countries including Indonesia, Vietnam, Malaysia, Thailand among others.

The company currently offers multiple products for merchants, banks, enterprises and even for tax compliance. For merchants, it offers mPOS, Digital POS, Digital POS+printer and Android POS solutions as well to cater to their wide range of requirements.

It has two revenue channels. One involves reaching the SME and MSME merchants directly and sell its solutions, while the other routes through banks, wherein Payswiff offers an end to end POS solution and service to the banks.

“Banks have access to over 90% of the market currently. Our solution helps them to go live within three days, without investing any additional resources to go to the market,” Shah added.

At present, over 40% of Payswiff’s business comes from tier 2, 3 and 4 towns and cities. The company plans to expand its services to over 3,000 locations in rural India, up from 1700 locations as of now.

What’s In Store For Mastercard?

The alliance with Payswiff is part of Mastercard’s government aided Digital India initiative which targets an ambitious goal of bringing 10 Mn merchants into the fold of digital payments by 2020.

Mastercard will work with Payswiff on an omnichannel distribution strategy to provide the app, services and support in regional languages, especially in areas where Point-of-Sale (PoS) machines are not easily accessible.

The partners will also focus on innovation and addition of new functionalities such as ‘same-day’ and ‘instant’ merchant settlements.

“Mastercard’s partnership with Payswiff is a vital step in this journey. It will allow millions of small merchants across the country to experience the convenience, safety and security of digital payments and bring about a behavioural shift in society,” he added.

POS: An Ever Rising Market In India

According to TechSci Research report, Indian POS terminals market is projected to grow at a CAGR of over 11% during 2017 – 2022. Post demonetisation, the market of POS terminals witnessed a surge as the cash crunch led by the ban on currency notes of INR 500 and INR 1,000 resulted in increasing adoption of several alternate modes of payment such as debit and credit cards.

Apart from Payswiff, a few key players in this segment are Ezetap, Mswipe, Pine Labs, Innoviti, Mosambee among others. The entry of players like Reliance Jio and PhonePe are further strengthening the Indian POS market.

Considering that the sector has the possibility of sustainable returns owing to a low-risk business model the investors have been inclined to POS startups so far. However, monetisation is still difficult. The POS players are thus seen collaborating with each other to pool in the resources. Earlier in April this year, PhonePe also partnered with Payswiff with an aim to expand its offline merchant base.

As Shah emphasised, the POS industry is there for more than 40 years now and even now new players are entering into this segment. This clearly indicates there is room for everyone to grow and build their own market share.

“Every player has its own strategy and is catering to a different need today. Some are more focused on enterprises while some are inclined towards kiranas. Some like us are only focused on the big opportunity offered by more than 50 Mn SMEs and MSMEs in the country. The future looks competitive but we believe it will definitely bring a higher share of collaboration with itself as well,” she added.

Karan Chechi, Research Director with TechSci Research shared in an earlier media statement that the growing adoption of POS terminals by urban kirana store owners, who had been dealing in cash for decades, is a major contributing factor augmenting demand for POS terminals in India.

“Government initiatives towards boosting digitisation as well as the opening of bank accounts by making Aadhar Card mandatory are key factor expected to positively influence the POS terminals market in India over the course of next five years,” he added.