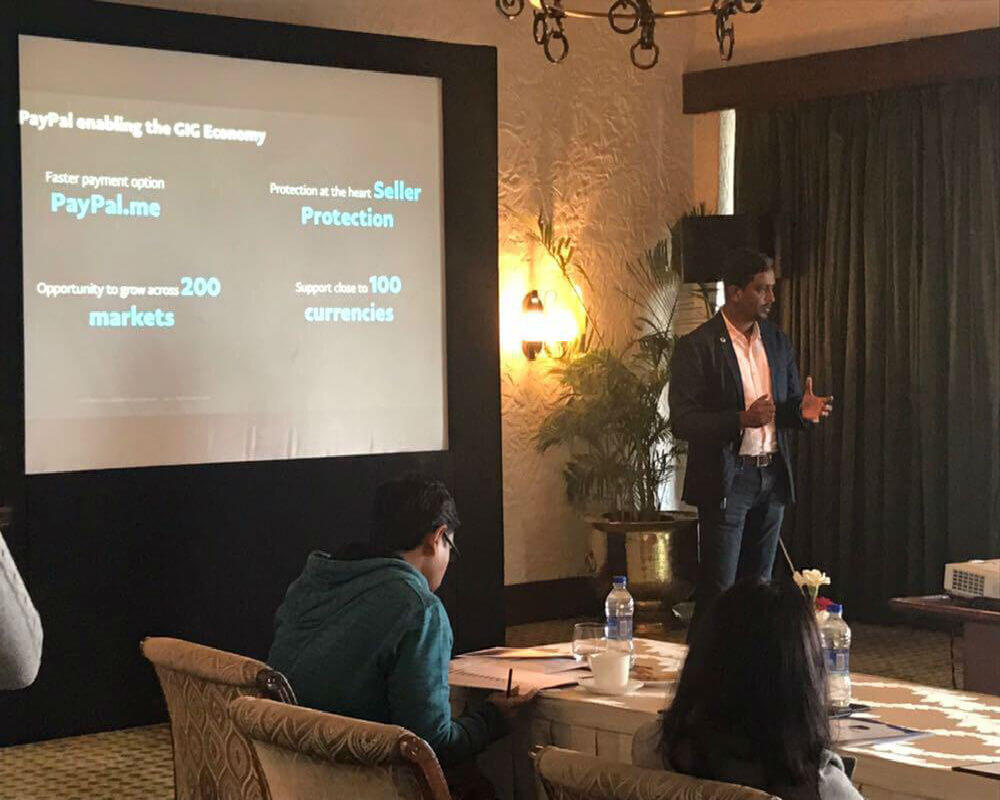 In A Brief Interaction With Inc42, Narsi Spoke On How Paypal Is Poised To Provide A Competitive Edge To The Indian Market

Narsi Subramanian, Director Growth, PayPal India is quite bullish about the growth of freelancers and digital payments in India as indicated during the release of global digital giant’s recent survey ‘India Freelancer Report’.

As per the report, about 10 Mn freelancers are currently housed in India. Although still at nascent stage, about 74% of the freelancers have PayPal accounts, aligning with the recent rise of digital payments in the country.

Evidently, even the government is moving towards a digital economy through initiatives such as Digital India programme. With an increase in urbanisation and ever-increasing usage of Internet, India has the second largest online population in the world with over 462 Mn Internet users.

Also after PM Narendra Modi’s demonetisation effect, fintech and digital payments have become the hottest sectors, flourished with growth and opportunities. The survey carried out among 500 freelancers further shows that globally, companies are optimistic about the growth of freelancing in India.

In the emerging challenges posed by the medium of digital transaction, Narsi Subramanian, Director Growth, PayPal India iterated why digital payment in India is poised to be a huge market space, in conversation with Inc42.

Here are a few edited excerpts of our interaction with him.

On How Demonetisation Shaped Digital Payments

Although digital payments were already flourishing in India, it was only after demonetisation in 2016 that digital transactions shot up. So, it is not surprising that PayPal, the global leader in digital payment, also recently made its entry into the Indian market.

In a bid to cash in on the digital payment space in India, PayPal had launched domestic payments services in November 2017. It is predominantly present in the cross-border space where merchants usually use the payment method for selling goods.

The Director also claims, “There is traction on the export front. Our focus was on cross-border space and since demonetisation, people have been searching for more secure methods of transactions so this is where PayPal resonates in terms domestic transactions too.”

On Strategy To Compete With Domestic Competitors

We are witnessing an enormous change in the way money transactions happen in India. With the emergence of e-payment companies like Paytm, Amazon Pay making big in India and the entry of Stripe,  the journey for PayPal is not going to be easy. What is going to help PayPal stand out?

“The overall aspect for India is cash flow,” stated Narsi, “clearly, there is a high level of competition. But what we are bringing is unique and it means that people will be able to access payments through one integration. Each transaction whether it be by individuals such as freelancers or merchants (local or global) will be able to seamlessly access local or global transactions through a single integration through PayPal.”

According to him, its PayPal’s unique products that make all the difference in terms of consumers’ preferences. “Paypal’s different products will work seamlessly. A lot of the local players are aspiring to reach globally. All transaction that happen either by tangible good sellers or by service providers such as the freelancers, are all a part of business consumption.”

PayPal has a lot of customers who are in small and medium businesses. These businesses use PayPal purely because they can reach a country like Germany or Japan by a simple integration programme. Website developers from an integration standpoint are aware of our products as much as merchants and their money is going to be back safely whenever transactions fail for reasons. It has a processing ability for 100 currencies.

Why Is PayPal Focussing On The Freelancers?

With the increased dependency of work on Internet, digital payments are on the rise in India. The ability of the younger generation to optimise Internet and use it to generate business is going to create a booming freelance industry in India.

According to the survey, 41% of the Indian freelancers are optimistic that they will experience significant growth in the next 12 months. The survey also points out that four out of five freelancers work for clients from Australia, the US, and UK, with an earning of $2 Mn (INR 20 lakhs) annually on an average.

“At the very outset, the value we bring to the service sector is immense. People are picking up PayPal services themselves; this is how we assess value propositions. Freelancers are small businesses, so they need a payment method known to the customers. That’s where we come in. So, we are not only solving the issue of payment method but we also provide seller protection because when there is a problem in the transaction, the business money for the service provider is not lost. This is quite resonating amongst our users. Security and efficiency is our edge. You can raise professional invoices through our tools as well,” stated Narsi.

On How PayPal Is Enabling The GIG Economy Of India

With youngsters continuously going for contractual work for better money and flexibility to explore more avenues, India’s GIG economy is going to experience an upsurge. To cash in on India’s growing GIG economy, PayPal had launched PayPal.Me which serves as a payment link to consumers. PayPal.Me was launched in August 2016  particularly for the freelancers and small merchants because most of the times, they don’t have websites.

With an increasing number of business transactions happening with markets in the US where the brand is well known, India is rapidly attempting to access safer payment modes. Narsi is of the view that, “Purely the reach element we bring in and our ability to process about 100 currencies, makes PayPal preferable. We have about 17 million active merchants making digital payments.”

On The Stand Of PayPal Motivating Startups

Today, there are startups who are focussing on exports, selling goods from tier II and III cities and freelancers, experiencing growth, are raising startup businesses. On the question of their commitment to bolster the startup ecosystem in India, PayPal’s initiatives started with the launch of the PayPal Incubator in 2013.

The incubator was launched in partnership with The Indus Entrepreneurs (TiE) and provides a conducive environment for early-stage startups to grow and evolve. As well as an exclusive facility, available at PayPal’s Technology Center in Chennai, the PayPal Incubator offers startups technology counsel and mentorship, infrastructure support and networking opportunities with both investors and customers.

The PayPal Incubator focusses on startups in the fintech space, including those focused on core payment features such as e-wallets, gateways, and remittances as well as payments enablers and adjacencies such as biometric authentication along with artificial intelligence, machine learning, big data, security and financial inclusion.

To date, the PayPal incubator has hosted fifteen startups and provides access to global mentors, angel investors and venture capitalists.

Digital economy is the new productivity platform according to V C Gopalratnam, CIO, Cisco and with the growing GIG economy and government determination to transform India’s economy via the digital medium, PayPal India will surely play a crucial role. Given that India is a software hub and new softwares are being developed rapidly, PayPal will have to keep its ground leveled so that it can have an edge over domestic players.