Since the beginning of 2022, at least 5,600 startup employees have been impacted by cutbacks, termination of contracts and layoffs

From unicorns such as Unacademy and Vedantu to global tech companies in India and growth-stage startups such as Furlenco and Trell, the tech industry is going through a phase of rationalisation after the funding boom of 2021

The spate of layoffs has prompted many to question some of the expansion over the past couple of years, with labels such as reckless and unplanned being attached to these expansion sprees

The warning signs were on the horizon in December last year; profit-booking, a global sell-off pressure and the subsequent stock market crash proved to be a precursor to the bloodbath to come. And while private startups might have felt safe given the damage to public companies in late 2021, those feelings have given way to fear, panic and rationalisation.

Cycles of booms and busts are not uncommon in the world of business — it is the ripple effects of the peaks that cause troughs and those that survive the trough rise up to build the next peak. In that sense, the business world mimics the survival of the fittest school of thought.

But unlike nature, where evolution more or less builds fortitude in the surviving species, the cycles of peaks and troughs in business seem to erase the collective memory of entrepreneurs, founders and employers. Because while the peaks elicit unbridled enthusiasm to expand and hire rampantly, the troughs invariably result in layoffs, cutbacks and disruption of livelihoods. And then the cycle starts again.

Since the beginning of 2022, at least 5,600 startup employees have been impacted by cutbacks, termination of contracts and layoffs at a number of unicorns, global tech companies in India as well as growth-stage startups.

The number has nearly doubled from around 4,000 in mid-April, when excluding Better.com, over 1,700 startup employees were let go. 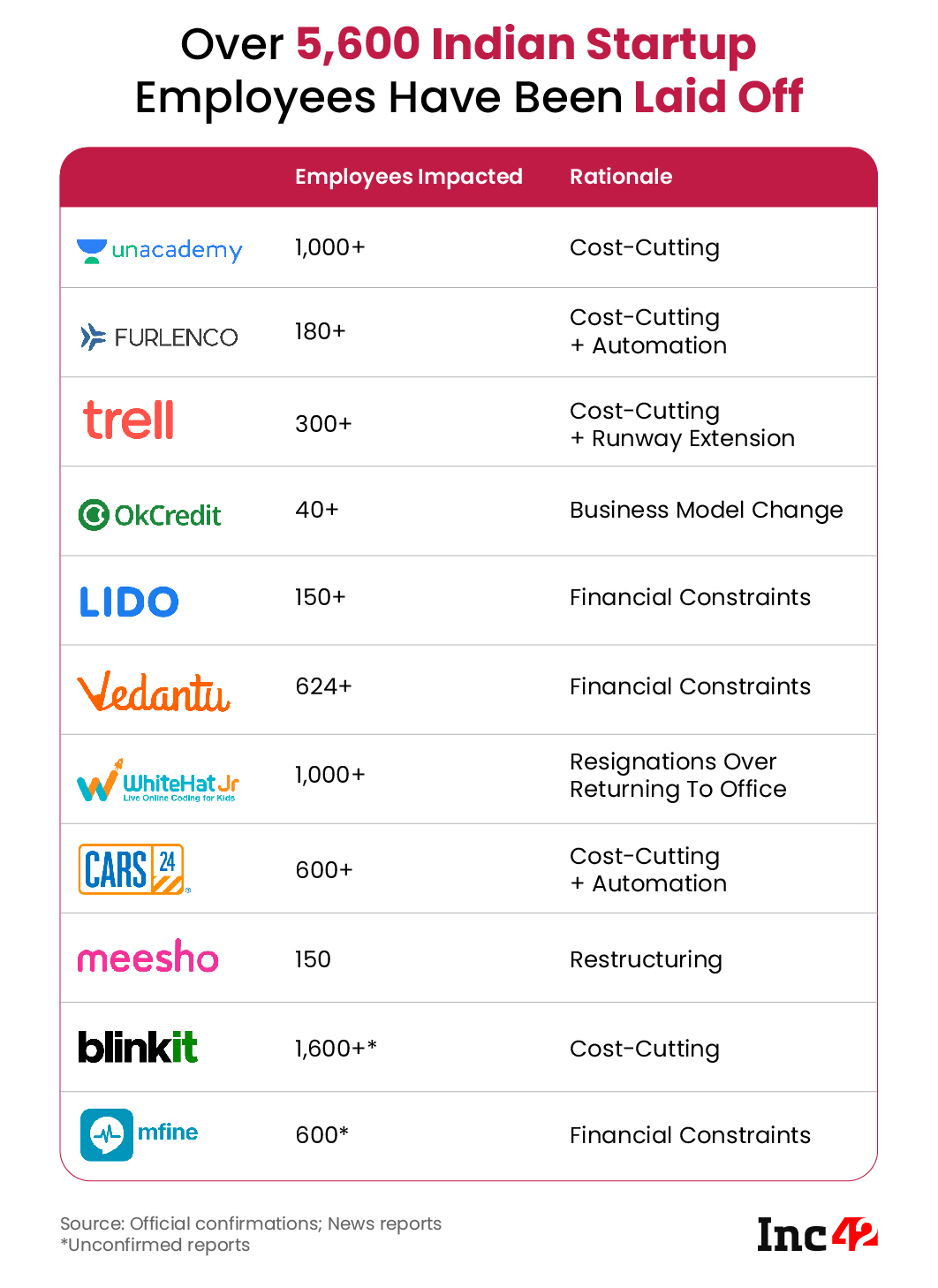 From ESOPs To Layoffs

It’s something that employees in the startup ecosystem have become more than accustomed to. In fact, given the crunch and the talent wars for particular roles that startups covet, the talk in the past two years had been about retention.

Including Swiggy, Unacademy, FirstCry and Zerodha, more than 29 tech startups executed ESOP buybacks last year and created a wealth of more than $335 Mn for their employees.

The trend has continued in 2022 as well, with 16 startups executing buybacks worth $159 Mn thus far. This is an unprecedented development in the Indian startup context. However, this push for retention stands in stark contrast to the layoffs in the Indian market today. So while a section of the startup workforce might be richer due to ESOP buybacks, another section is facing a crisis and staring at the potential of losing their jobs.

Startups such as Trell, Lido, Vedantu, Unacademy, Furlenco and others have gone through cutbacks and downsizing in search of improved profitability. Besides this, US-based mortgage tech company Better.com has also asked employees to accept voluntary separation agreements. These ‘soft layoffs’ at Better.com’s India operations where another 920 employees saw their positions terminated earlier this month, after over 3,000 were already let go by April.

In early April, edtech unicorn Unacademy laid off over 1,000 employees, shut down its PrepLadder vertical. More than 800 employees at BYJU’S-owned WhiteHat Jr were told to resign since they didn’t agree to working from the office as exclusively reported by Inc42.

And as again exclusively reported by Inc42 this week, automobile marketplace Cars24 is also letting go of employees to save costs and in a push to automation. The unicorn is laying off as many as 600 employees in this downsizing.

The spate of layoffs has prompted many to question some of the expansion over the past couple of years, with labels such as reckless and unplanned being attached to these sprees.

Trell, for instance, laid off more than 300 employees from its roster earlier this year amid allegations of irregularities. The reasoning, according to sources within the company, is that many of the languages and categories that had been added to its social platform in 2020 and 2021 have not paid off. So the company is only focussing on those categories and languages that are bringing in revenue, and shedding others, some current employees told Inc42 this week.

Vedantu CEO and cofounder Vamsi Krishna took to LinkedIn to announce the layoffs and said that the war in Europe, impending recession fears and federal rate interest hikes have led to inflationary pressures and massive correction in the market. The company has laid off over 600 employees in the past couple of months from a workforce of around 5,000.

“Given this environment, capital will be scarce for upcoming quarters. With COVID tailwinds receding, schools and offline models opening up, the hyper-growth (9X) that Vedantu experienced during the last two years will also get moderated. For the long term sustenance of the mission, V [Vedantu] would need to adapt too,” he added.

Other founders have also rationalised the layoffs as being focussed on ensuring more robust unit economics and cutting out areas or verticals that are not moving the needle. Another focus is automation — particularly in the cost-intensive marketing, customer success and support operations. Startups are leveraging the wider ecosystem to replace human-driven functions with automation, as seen in the case of Furlenco, which laid off 180 employees in March.

If the expansion involved greater spending and scaling-up, then the downside is that it also made profits harder to come by. It’s not uncommon to see revenue generation taking time in new verticals, so these expansion efforts were akin to throwing several darts on the board and hoping that some of them would stick.

We have seen this play out in 2016, after the boom in ecommerce and hyperlocal funding. At the time, shutdowns became commonplace and layoffs were seen frequently. After that in 2019, there was another cycle of cutbacks when Zomato laid off nearly 600 employees in a push towards automation and in the same year Paytm also let go of more than 500 employees. In July 2019, ecommerce platform ShopClues laid off close to 200 employees before its acquisition, while Rivigo downsized its operations by 100 employees.

In 2020 too, Covid forced layoffs and furloughs at many companies, with Swiggy laying off over 1,100 employees, while overall, more than 10,000 employees were laid off across startups, per the Inc42 layoffs tracker.

But this was somewhat mitigated by the funding boom post-2020, where hiring was ramped up across sectors — in the case of Swiggy, the startup ventured into quick commerce and increased its team size.

To take the darts metaphor further, it is the shots that didn’t land perfectly in 2020 and 2021 that are now being retrieved by founders and startups.

After a brief period of more hustling, firefighting and striving for some semblance of profitability, a boom cycle will reappear. The biggest challenge for the startups that survive to see those days will be to not forget the history that’s being written today, lest they relive it.