Org Chart: The People With Power At IPO-Bound Nykaa

Org Chart: The People With Power At IPO-Bound Nykaa 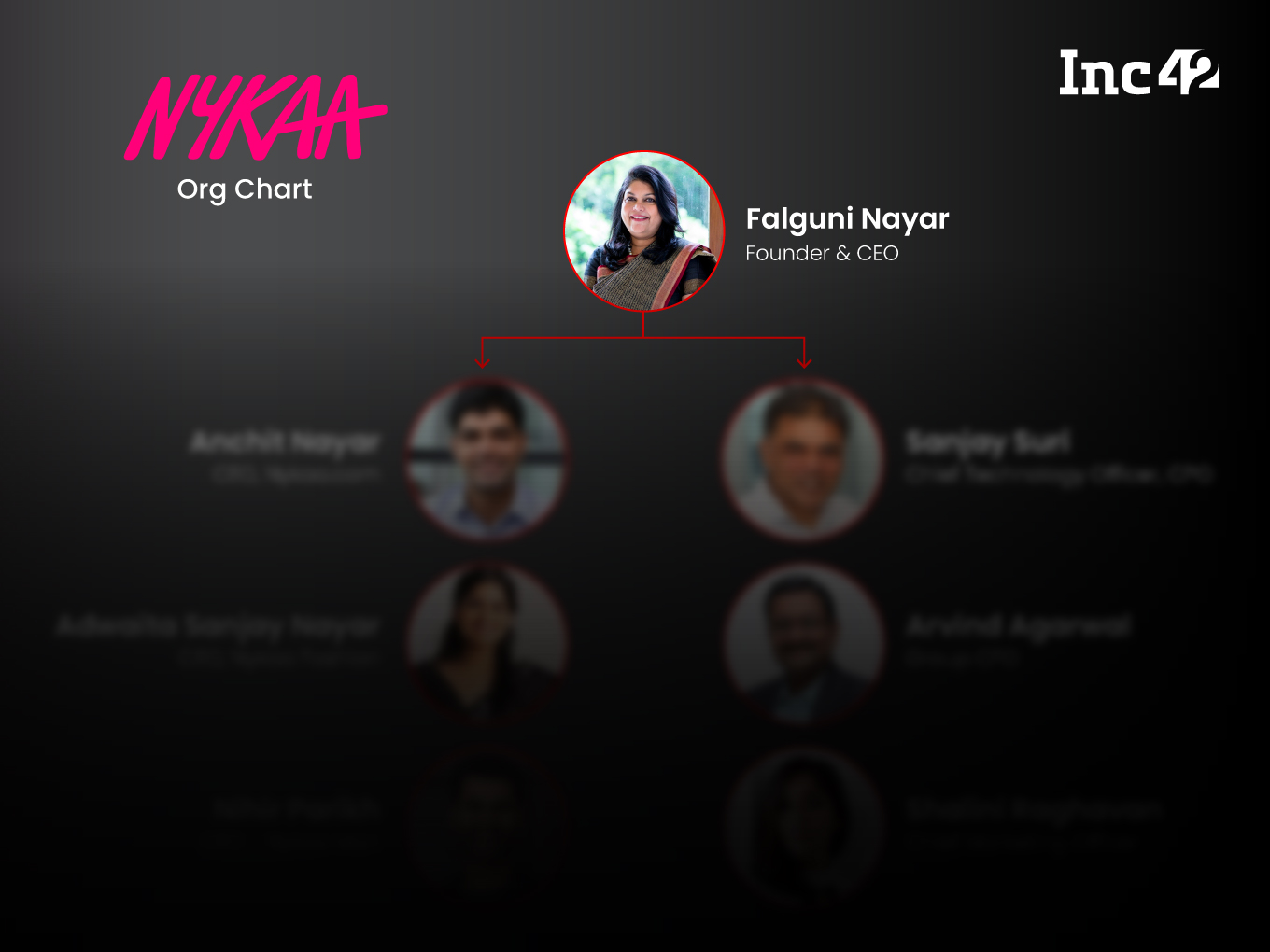 Nykaa turned profitable in the financial year 2019, when it recorded a revenue of INR 1,160.98 Cr

It is looking to come out with an IPO later this fiscal at a valuation of $4.5 Bn — almost 50% above its earlier target of $3 Bn

Its top brass is a good mix of young blood and experience, the different vertical and function heads are populated not only by previous founders, but also people who have proved their mettle in companies like Vodafone, Unilever and GE

Online beauty retailer Nykaa is looking to come out with an IPO later this fiscal at a valuation of $4.5 Bn — almost 50% above its earlier target of $3 Bn. This is on the back of a significant bump in its online sales due to the lockdowns and restrictions brought upon by the Covid-19 pandemic. Founded by former investment banker Falguni Nayar, Nykaa will reportedly keep unchanged the size of the IPO at between $500 Mn-$700 Mn.

Interestingly, the ecommerce company was valued at $1.2 Bn in March 2020 (just when the pandemic lockdowns started) when it raised a $25 Mn funding round led by Steadview Capital. The company further raised an undisclosed amount from Fidelity Investments reportedly at a valuation of $1.8 Bn in November last year. Besides this, the company also raised funding from Bollywood stars Alia Bhatt and Katrina Kaif last year.

The Mumbai-based company was founded by Falguni Nayar in 2012. It is an online marketplace for beauty and wellness products with over 1.5K brands and 130K products in its bucket. The company claims to fulfil nearly 1.5 Mn orders a month. It started expanding its presence in physical stores back in 2015 and currently has its footprint across 55 retail store chains and housing luxury brands such as Tom Ford, Jo Malone London, Dior and Givenchy.

Nykaa turned profitable in the financial year 2019 when it recorded a revenue of INR 1,160.98 Cr. It claims to have maintained the profitability in FY2020 as well, with revenues increasing 60% to INR 1,860 Cr but hasn’t filed its financials yet for the year.

But who are the movers and shakers behind its growth and the rare feat of profitability in the Indian ecommerce industry? Unlike most internet startups, Nykaa’s top brass is a good mix of young blood and experience, the different vertical and function heads are populated not only by previous founders but also people who have proved their mettle in companies like Vodafone, Unilever and GE.

Here’s a look at the people with power at Nykaa: 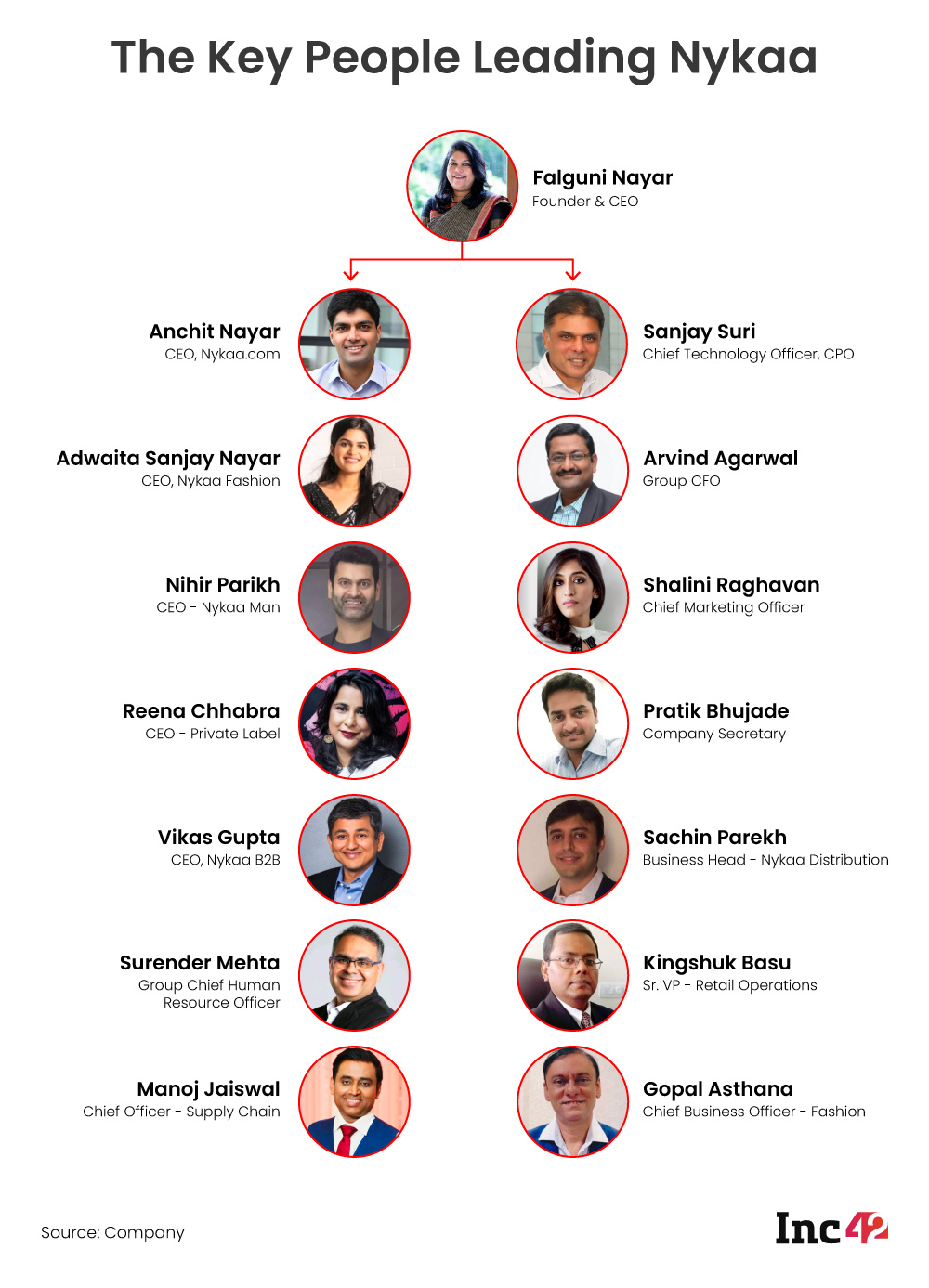 Falguni Nayar founded Nykaa in 2012 with the vision of building a multi-brand omnichannel beauty-focused retail business. After graduating from IIM Ahmedabad, Nayar started her career in consulting with A.F. Ferguson & Co. She then spent 18 years at the Kotak Mahindra Bank, helming several businesses and was the Managing Director of Kotak Mahindra Investment Bank, and was director at Kotak Securities – the bank’s institutional equities division.

She was also listed as one of Asia’s Power Businesswomen 2019 by Forbes Asia, among other accolades. She is on the board of several companies, including ACC and Dabur.

She earns a fixed compensation INR 5 Cr per annum and a variable pay of 2% commission of profit before tax of the company on a consolidated basis, subject to applicable statutory limits. The remuneration paid to Falguni Nayar in FY 2021 was INR 10.8 Cr, including an ex gratia amount of INR 7 Cr.

Adwaita Nayar is Falguni Nayar’s daughter. Currently, Adwaita is the CEO of Nykaa Fashion. She was a part of the founding team of Nykaa and oversaw product, tech, marketing and operations at various points over the initial two years. She is a graduate from Yale and an MBA from Harvard Business School.

She earns a fixed Compensation INR 2 Cr per annum and a variable pay of 0.5% commission of profit before tax of the company on a consolidated basis, subject to applicable statutory limits.

Anchit Nayar is Falguni Nayar’s son. He is the CEO of Nykaa.com, the flagship beauty e-commerce business of the online retailer. Prior to joining Nykaa, he worked in investment banking for 8 years at Morgan Stanley. He is an alumnus of Columbia University.

He earns a fixed Compensation INR 2 Cr per annum and a variable pay of 0.5% commission of profit before tax of the company on a consolidated basis, subject to applicable statutory limits.

Nihir Parikh is the CEO of Nykaa Man, which is the company’s recent foray into men’s categories. He joined Nykaa in 2015 as the chief strategy officer and was later elevated to the role of chief business officer. He is an MBA from INSEAD.

As the chief strategy officer, Parikh led a team of over 50 brand managers to on-board 700 brands to the company’s portfolio, developing a range of differentiated beauty offerings. This has led to a 30% jump in sales, which stood at over INR 1,250 crore in FY19.

Reena Chhabra joined Nykaa in 2016 and is the CEO of Nykaa’s private-label arm. She has 20+ years of experience in the retail industry. Prior to joining Nykaa, she was the COO of Colorbar cosmetics where she grew the cosmetic brand to the top third slot in the colour cosmetic industry. Previously, she successfully led Lakme Beauty Services at Unilever, spearheading the Lakme Beauty Salon Business. She has had successful international and national stints with companies like Kaya Skin Clinic, Kodak, Fosters and Eli Lily in a career spanning more than two decades.

Chhabra holds an MBA Degree from the Faculty of Management Studies, and is a keen cycling and adventure sports enthusiast. The total remuneration paid to her in FY 2021 was INR 3 Cr.

Arvind Agarwal is the group CFO and joined Nykaa in July 2020. Prior to that, he has worked with Amazon, Vodafone India and the Tata Group. Agarwal claims that he led the finance team of the biggest circle of Vodafone India as CFO and partnered the telco’s business in reigniting the growth story by helping it jump to double-digit CAGR from low single digits. This resulted in significant & sustained growth of the telco’s revenue market leadership (RMS). The total remuneration paid to him in FY 2021 was INR 1.96 Cr.

Sanjay Suri dons the role of both chief technology officer and chief product officer. He joined Nykaa in June 2016. Prior to that, he was the CTO of ecommerce marketplace Tradus.com where he led the transition from a legacy monolith platform to a web services architecture while simultaneously delivering on new feature requirements to enable the aggressive growth targets promised to investors.

Suri has also worked with Amazon and Oracle. He holds two masters in computer science from Savitribai Phule University and University of South California Santa Barbara. Earlier, he founded and exited Videocrux.com, a free-to-watch online video (TV) portal and syndication platform. The total remuneration paid to him in FY 2021 was  INR 2.3 Cr.

Shalini Raghavan is the chief marketing officer of Nykaa and joined the company in January this year. Previously, Raghavan was the CMO at L’Oréal India for around 2 years. With over 15 years of experience in the beauty industry, she joined L’Oréal from Hindustan Unilever Limited (HUL). She has worked in leadership roles in marketing and business development of brands such as Lux and Lakmé, and was the global brand director (Asian and African) of Dove Masterbrand.

Shalini did her MBA in marketing from S.P. Jain Institute of Management & Research and is a graduate in economics. She started her career as area sales manager with Britannia Industries. The total remuneration
paid to her in FY 2021 was INR 38.5 Lakh.

Vikas Gupta is the CEO of Nykaa’s B2B arm. With more than 20 years’ experience in leadership roles, he earlier led the Home Care business of Unilever Indonesia where he delivered 6X value creation over 3 years. He has worked in retail businesses in 5 countries in 3 continents and has strong expertise in emerging markets.

Manoj Jaiswal is the Chief Officer-Supply Chain of Nykaa E-Retail Private Limited. He has been associated with the company since November 1, 2013. He holds a bachelor’s degree in business administration and a master’s degree in business administration from the All Institute of Engineering & Management. Jaiswal has over 8 years of experience in supply chain management. Previously, he was associated with Seventymm Services Private Limited and Ibibo Web Private Limited. The total remuneration paid to him in FY21 was INR 1.5 Cr.

Surender Mehta is the Group Chief Human Resource Officer of Nykaa. He has been with the company since December 23, 2020. He holds a bachelor’s degree in business studies from the University of Delhi and a post graduate diploma in business management from Institute of Management Technology, Ghaziabad. He has completed the advanced management program from Harvard Business School. He has over 21 years of experience in human resource management. Previously, he was associated with Vodafone India Services Private Limited as the head of human resource business & India centre and ITC Hotels Limited. Previously he has also served as a director on the boards of Vodafone India Services Private Limited and Vodafone Global Services Private Limited. He has been recognised as Diversity & Inclusion HR Leader of the Year. The total remuneration paid to him in FY21 was INR 70.7 Lakh.

Kingshuk Basu  is the senior vice president- retail operations of FSN Brands. He has been associated with FSN Brands since December 7, 2020. He holds a bachelor’s degree in technology in electrical engineering from the Indian Institute of Technology, Kanpur and master’s degree in business administration from the Michigan State University. He has over 18 years of experience in retail operations, marketing, sales and e-commerce. Previously he was associated with many companies, including Wellness Forever Medicare Private Limited, Conscious Food Private Limited, Spencer’s Retail Limited, Daymon Worldwide. The total remuneration paid to him in FY21 was INR 28.5 Lakh.

Gopal Asthana is the chief business officer (fashion) of Nykaa Fashion. He has been associated with Nykaa Fashion since November 11, 2019. He holds a bachelor’s degree in electrical engineering from Rani Durgavati Vishwavidyalaya, Jabalpur and a post graduate in management from the Indian School of Business. He is a member of the Council of Chartered Financial Analysts. He has completed the course on ‘Competitive Marketing Strategy & Corporate Development: Mergers and Acquisitions’ from the Wharton School, University of Pennsylvania. He has over 22 years of experience in retail & e-commerce. Previously, he has been associated with Future Retail Limited, Shoppers Stop Limited. The total remuneration paid to him in FY21 was INR 1.9 Cr.