Moneyball: Ashish Sharma of InnoVen Capital India Wants To Hunt The Whales, Not The Tuna, Among Startups

Moneyball: Ashish Sharma of InnoVen Capital India Wants To Hunt The Whales, Not The Tuna, Among Startups 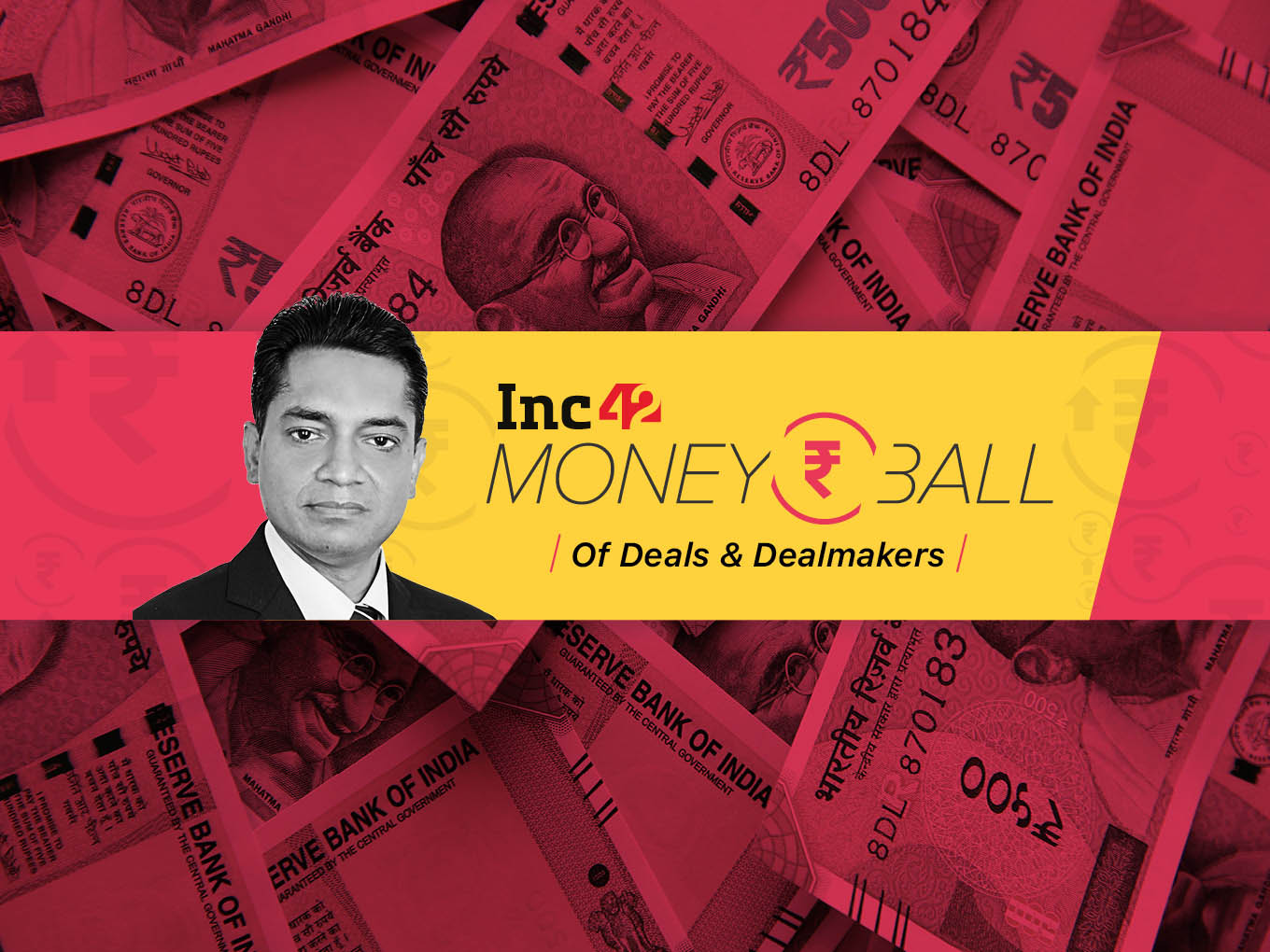 In the next four-five years, Sharma says some of the companies that are in the late-stage today will create a disproportionate amount of value

If you take one look at Innoven Capital’s list of portfolio companies, you will realise how successful the venture debt and lending platform has been with its bets in India — no need for any deep ecosystem insights or understanding here. Byju’s, Faasos, RentoMojo, Furlenco, Myntra, Portea, Yatra.com, Practo, and Swiggy are some of the names on the list — startups whose second name spells success and brands that no longer need an introduction.

InnoVen Capital India claims to be the first — and currently the largest — venture debt provider in the country. It focuses on investing money in startups that have already raised some form of institutional funding.

Innoven Capital was called SVB India Finance in its earlier avatar before being acquired by Singapore-based investment company Temasek for $40.7 Mn (INR 300 Cr).

Ashish Sharma, the CEO of InnoVen Capital India, took over the mantle just over a year ago after the firm saw high-profile exits like that of its CEO Ajay Hattangdi and deputy CEO Vinod Murali, who left the platform to start their own firm, called Alteria Capital.

As such, Sharma had his job cut out when he took over the role — to keep the investment train chugging.

Sharma admits that the situation he landed in did cause some short-term disruptions but emphatically adds that the train is going full steam ahead now, with InnoVen Capital India doing more business in the last 12 months than ever before. A part of that is thanks to the goodwill the firm enjoys in India and the talent and increased headcount it has garnered under Sharma’s reign.

Sharma, who was previously the president and CEO of GE Capital, believes that in the next four to five years, startups that are in the late-stage today will create a disproportionate amount of value in the ecosystem.

He adds that startups that are fresh on the scene will need to have businesses that are very different to their earlier peers because increasingly first-time digital consumers are coming on board. Many of them will be transacting digitally for the first time and will not have the ability to pay to the extent that the first 50-100 Mn people did.

A history buff who is currently reading the accounts of Medieval Europe, Sharma has been watching “more” of Netflix these days, trying to catch up on older series like Narcos and House of Cards.

Here are the excerpts of the Inc42 conversation with Ashish Sharma, the CEO of InnoVen Capital India, in this week’s Moneyball. 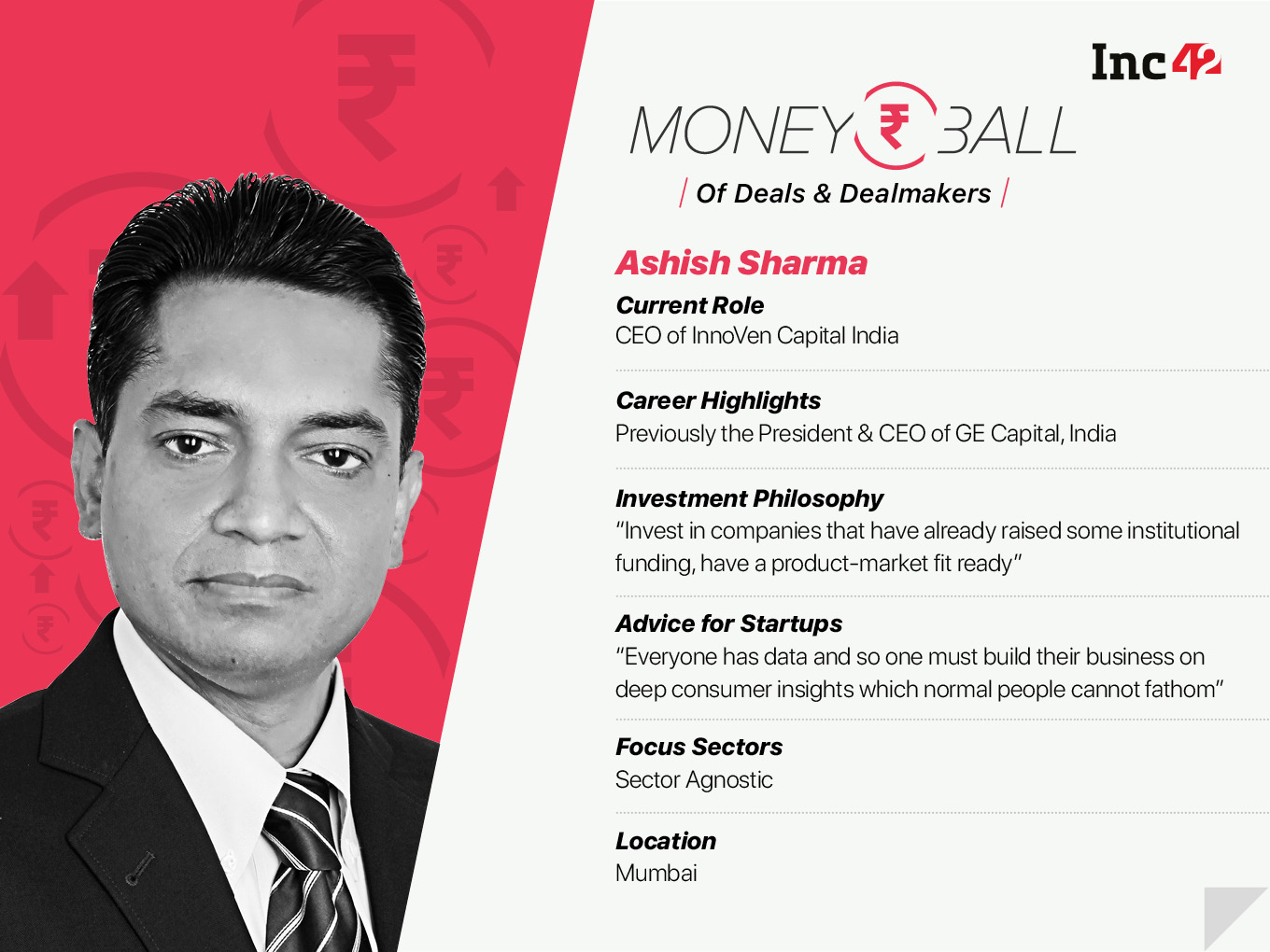 Inc42: Could you tell us about your investment thesis?

Ashish Sharma: We invest into companies which have already raised some institutional round of funding, with its product market established to some extent, the team in pace, and some revenues coming in.

We are sector agnostic. We look for founders who are trying to solve some real problems which are not too niche.

Inc42: How have you managed to latch on to so many Indian startups that have gone on to set a benchmark?

Ashish Sharma: We were one of the first venture capitalists in the Indian debt market. Today, if you look at this market in India, our share is close to 50%. We have a lot of portfolio companies, and we do a lot of follow-on funding for our companies. We also have a lot of founders who help us deal with flows.

Our ability to write big cheques is also a critical criteria. We are one of the few players who do a lot of late-stage funding. We have invested in around 7-8 unicorns who may not have been unicorns when we came. We also help companies to make connections with countries such as China, Singapore, etc.

Ashish Sharma: We might have done over 150 transactions till date and, typically, the ticket size depends on the stage and maturity of the company. So we would take about $0.7 Mn (INR 5 Cr) at the minimum, and at the higher end we might go as much as $13.5 Mn (INR 100 Cr).

In the venture debt model, there’s a small equity kicker (similar to a warrant) that we take, and can range between 10-15% of the amount disbursed as venture debt. This translates into a small stake on the cap table (on a fully diluted basis). We don’t target any stake percent, as this is a function of the valuation of the company — what stage we come in and how much further capital (and at what valuation) is raised.

We closed more than 35 transactions in the first 8-9 months of this year. About 30% of those transactions are the follow-up of our existing portfolio companies as they raise more capital, then 8-10 companies were in the series A or series B stage, and the rest were in mid-to late-stage companies.

Inc42: What was your thinking behind your investment in Bounce?

Ashish Sharma: There are two things that are happening in the B2C world right now. One is that there are already a better product that is disproportionately better than the existing ones, and the other scenario is that there is someone who is creating a totally new category.

India is the largest two-wheeler market and today there are some real problems in terms of mobility in the intracity scenario. Bounce is trying to put in place a tech-enabled rental platform where people can have more intracity mobility than what is available today.

You might take a metro in a city like Bengaluru but the last mile will always be an issue. As such, you can take a bounce bike from metro to the office and vice versa while using parking stations available in high concentration areas.

Inc42: There was a management change at Innoven about a year ago —the CEO and deputy CEO both resigned. What were your challenges, and how did you keep the ship steaming?

Ashish Sharma: I have been at Innoven for over a year now; and of course, when you have such departures, there are some short-term disruption you see in the franchise.

From our standpoint, the business that we are in is a team sport. We have ramped up the team which have grown much bigger than what they used to be a year back. We now have on board a lot of new talents who come from the early-stage investing background, banking background and were entrepreneurs.

We have done more business in the last 12 months than we have ever done. What also helped us was the existing relationships with our portfolio compnanies and our reputation in the market, which is top notch. All of these things helped, but yes there were a few months of disruption.

Inc42: How do you see the sharing economy evolve in India?

Ashish Sharma:  When you look at the younger population… are already used to the sharing economy. The older generation was more attached to ownership of assets, but the youngsters today are not very keen on owning assets. Economically, it works out for the younger lot.

We have found that younger consumers have a habit of changing things very quickly. Three-four years back, the life of a mobile phone could be four years and that is not the case anymore. The same thing is related to furniture, cars, and all of these are being driven by the younger mindset.

Inc42: Innoven has a brilliant track record, especially with internet consumer companies, given your foresight powers. What is in store for the next 4-5 years?

Internet 1.0 happened in the late 90s and the early 2000s; and at the time, the internet penetration was not very high. Right now we have gone through the Internet 2.0 cycle, which started with companies like Flipkart from 2010 to 2017-18 where essentially a lot of the companies and startups took some models that have been successful largely in the West and in China, and they were able to replicate (with great execution) with a few tweaks.

Internet 3.0 in my mind would require companies to bring in different business models which will be very India centric that may not have been tried everywhere — there would be no copy-paste of the model and there will be a sharp differentiation in the product.

There are probably 100 Mn who are transacting online and the next lot of people who come onboard will produce new business models that will cater to that segment. Those business models will have to be very different because these new consumers will not have the same ability to pay to the extent which the first 50-100 Mn people had.

Discussion around VR, AI, and blockchain are quite hyped right now, and my feeling is that everybody is wanting to talk about these technologies — but at the end of the day, it is just an enabler trying to solve some problem.

Companies that are able to harness the powers of these technologies to do things in an unconventional manner are the ones who will make a difference. Just using these terms for the sake of creating a buzz is not going to help.

Inc42: Any advice to startups?

Ashish Sharma: You have to solve the real problem which can’t be very niche. It can become a profitable small business but that’s not we look for in the venture world — we go for hunting whales, not tunas.

We try and find out as to what kind of insights the founders have. Everyone has data but the question is, whether you have built your business on some deep insights, and have you understood your consumers to a level which normal people cannot fathom.

Inc42: Any updates on the total investment figures?

This article is part of Inc42’s MoneyBall series in which we bring you up close and personal with the pioneers of the investment world. Dive in to find out about what excites them, their views on the latest technology and investment trends, and what the future looks like from their viewpoint! Explore more stories here.