For Microsoft CEO Satya Nadella, The Concept Of ‘Hit Refresh’ Has Helped Microsoft Stay Relevant Even After 42 Years

For Microsoft CEO Satya Nadella, The Concept Of ‘Hit Refresh’ Has Helped Microsoft Stay Relevant Even After 42 Years 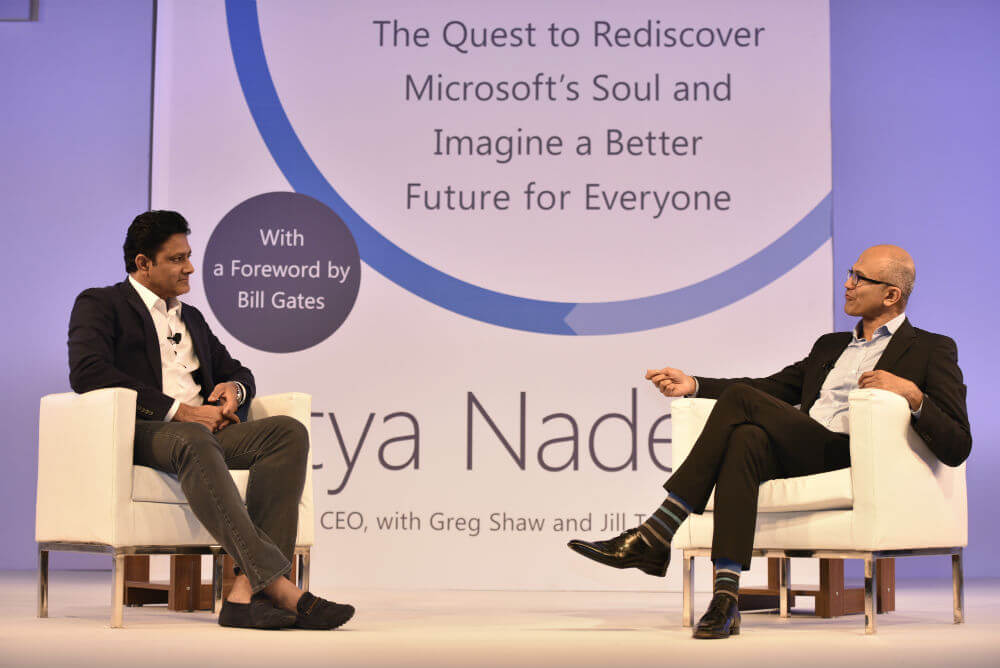 Hit Refresh – The Quest to Rediscover Microsoft’s Soul and Imagine a Better Future for Everyone is the new book by Microsoft CEO Satya Nadella which is taking the town by storm. But in many ways, it’s a peek into Satya’s soul itself; a story about the life experiences that defined him, the values he holds close to his heart, and his vision for the future of technology.

In a fireside chat with former Indian cricketer Anil Kumble in the capital today, the Microsoft CEO shone a light on all these and more. But one of the most significant things that he talked about was what values he holds dear to his heart as a parent and leader. And Nadella’s humbling answer was “empathy”.

“One of the things that I have realisedn in terms of who I am as a leader as part of writing this book is that you are the culmination/combination of your own life’s experiences. Whether it is a team sport you played growing up or you as a parent or even a leader. Sometimes we think we can compartmentalise. But one can’t as we are much more integrated in what we are and what are experiences we have. The value that I have learnt to deeply appreciate is this thing that I talk a lot about – empathy.  I am not saying that somehow we are all born with this innate capability but it’s through life’s experiences that we are able to see more of us in others and them in us, to lead, to innovate and to be a better parent. That’s the value I have come to realise the most.”

Speaking further about the hit refresh moments that have transformed their lives, Anil Kumble disclosed that as a cricketer he had to hit refresh before the end of every season. For Satya, however, the birth of his son was one of those moments which had deep impact on him.

He revealed, “I was 29, and both my wife and me were only children. So we were very excited, and focused on what this will do to our weekends, when will Anu ( wife Anupama Nadella) get back to work, and what have you. Then of course, Zain was born and everything changed because he had in utero asphyxiation. So he was born with severe cerebral palsy. For the first multiple years, I struggled with it. I would always think about why these things happened to me. All these plans we had were no longer valid. It was only in watching Anu and what came much more naturally to her, which was giving him a best shot, I realised over time that nothing had happened to me. It was Zain who was affected and I needed to step up as a father.” That for Satya was a defining moment of who he was as a leader.

When Kumble asked Satya how empathy has helped transform Microsoft, he said, “Microsoft’s core business is to meet unmet, unarticulated needs of customers. There is no way we can succeed in something like that if we don’t have that deep sense of empathy. What is it that the customers are not just telling us, but what is it that they really need from us?”

So Satya thinks of “empathy” not just as something nice to have but more as the core to the innovation agenda of a company. The challenge however according to him is that one can’t say that one will go to work and turn on the empathy button. That’s where he thinks this integration between one’s life, one’s pursuits, what one has learned as a parent, as a spouse, as a partner comes into play. Being able to take that to work for him is perhaps what can unlock empathy.

“I am not even claiming somehow that empathy is somehow innate. It is something that needs to be developed and it’s life that teaches you. It is not a destination that’s ever reached. Every day you push yourself to have increasing levels of empathy for more people around you. That’s the best way to amplify your work,” Satya reflected.

The Concept Of Hit Refresh And Success

Elaborating more on his concept of ‘Hit Refresh’, Satya stated that when one is very successful, it’s more at a premium to have the ability to hit refresh. In successful companies, it is a new idea that helps them grow from being a good startup to being a successful company. The capability in the company also gets built around that concept. But there’s no concept /idea which will have a life for all times. So one needs to come up with a new concept/idea.  And that’s where the culture of a company will matter. 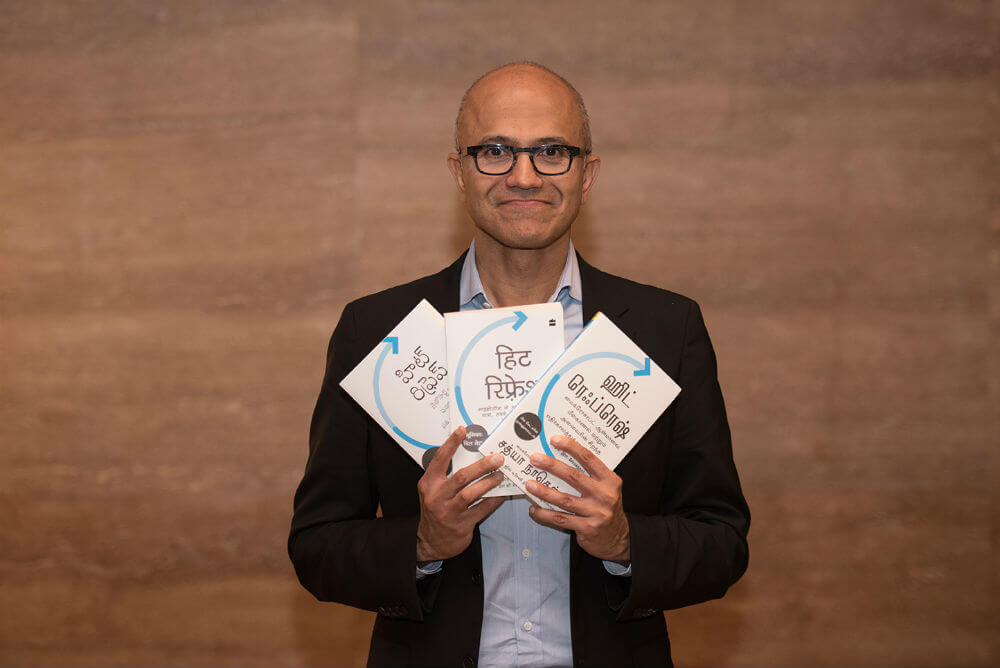 Shedding more light on this culture in Microsoft, Satya revealed, “Microsoft has been in existence for 42 years. And every five years, we have had some existential threat. In my 25 years at Microsoft, I say every five years someone is writing about some new company that’s going to kill us. Except that it’s always different. So there must be something that we are doing right to stay relevant, to continue to question status quo. It’s not easy, but it’s our ability to do so that seems to be the trick for our continuance.”

Satya Nadella On The Future Of Technology

Speaking on the technologies that have the potential to shape the future, Satya believes that they will be big data, quantum computing, and those that help enhance the man-machine interface.

Elaborating further, he stated, “If you look at computing history, it has been all about enhancing the man machine interface. From character mode to graphical interface to touchscreen now, and further with speech, these are amazing technologies as to how we have made it much more natural and intuitive to get more people to use computing. But the ultimate computing in my mind is what I describe as mixed reality. You can now, just  in front of your eyes, have both the real world and the virtual world, and blend the two. To me, that is the complete realisation of the digital mirror being there always.”

He added, “So I am very excited by what we are doing in this space with HoloLens in the field of education, in how people in factories work, or in Virtual Reality. People are able to transcend space and time to collaborate. We have always built tools around how people collaborate and communicate. Teleportation is no longer Star Trek, it’s sort of possible in real life.”

The other technology he is betting big on is data and AI. The ability to collect data and reason over it or create intelligence or AI, will define educational outcomes, health outcomes, and others. Any other value creation will fundamentally be dependent on how good are you in creating these data feedback loops.

The third area that Microsoft is invested in is computational challenges which have not been solved. For instance Nadella cited that the enzyme involved in food production cannot be modelled. “In fact it will take all the time from Big Bang to now to do so if you are used to classical computers. But with a Quantum Computer we can solve that. So we are also trying to bring in quantum computing which though is a longer time horizon bet for us by combining novel ideas in mathematics, physics and computer science,” he added.

In conclusion, Satya Nadella stated that whatever it is that one does, be it in a technology company like Microsoft or in sports like cricket, the idea that you need to find deeper meaning in what you are doing than just the activity itself seems to be the real trick to get satisfaction.