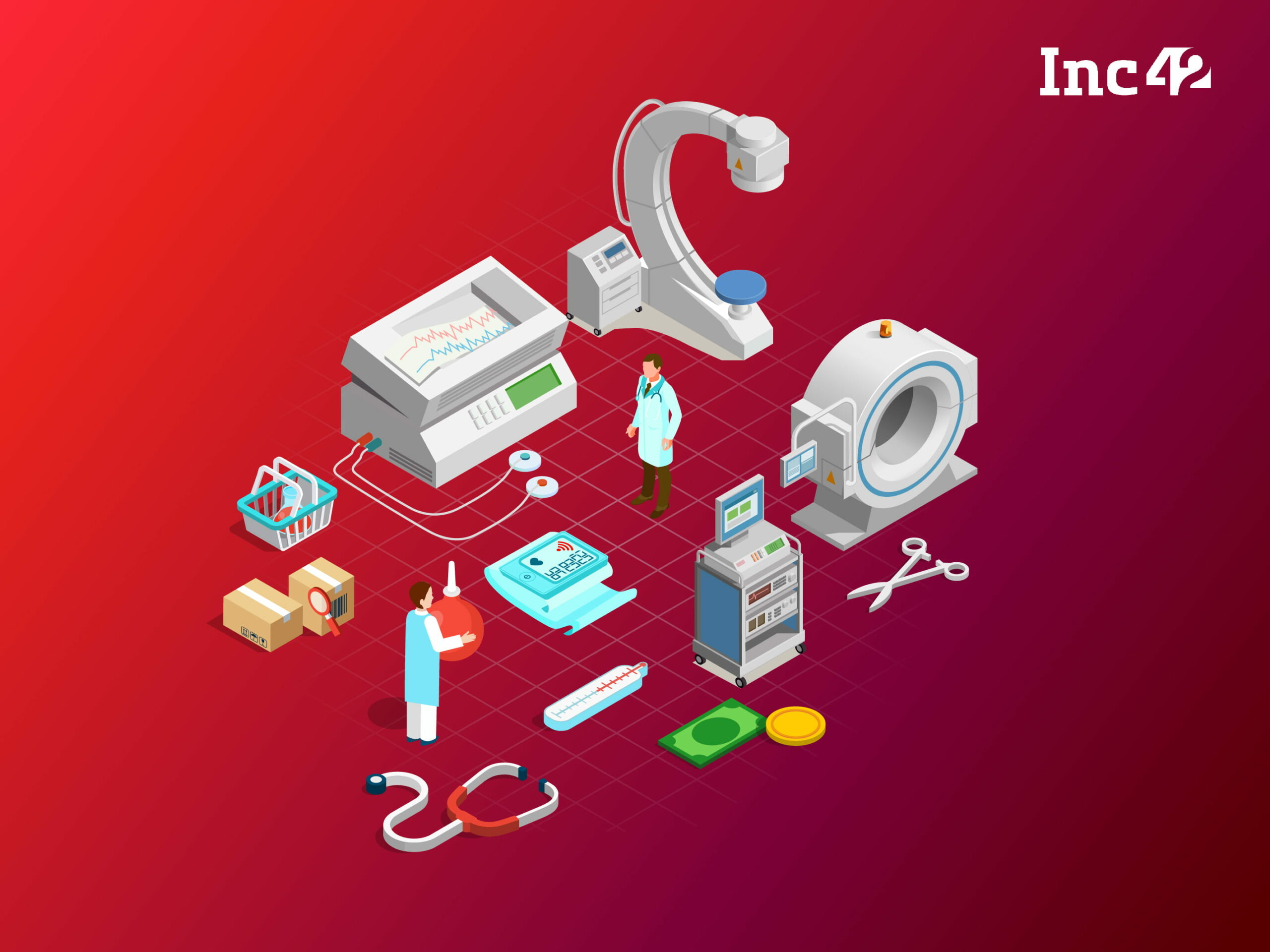 In 2019, the India accounted for more than 13% of the Asia-Pacific medical devices market

40% of medical devices that are imported into India are pre-owned, AIMED

With the shifting market dynamics caused by Covid-19, pretty much everything is in overhaul mode. Within the burgeoning healthtech ecosystem, the medical devices market is also witnessing a dramatic shift as policies are being changed to accommodate the high demand. 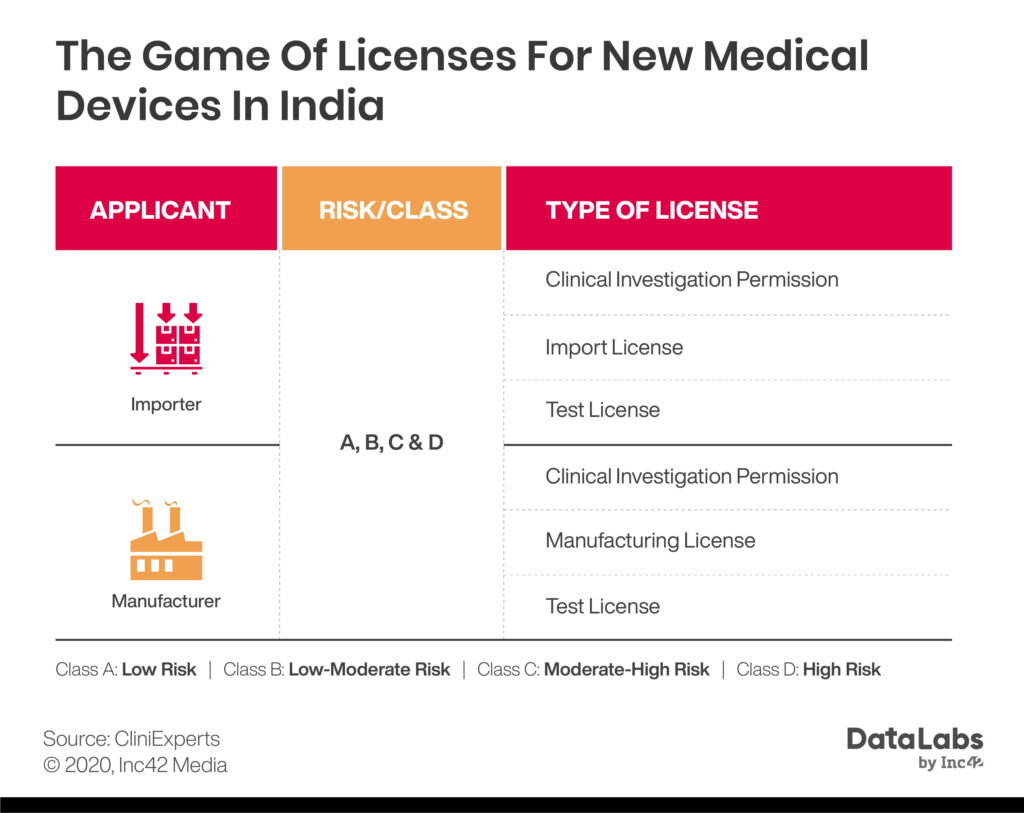 Many industry experts that Inc42 spoke to said that the medical device approval process in India is a highly time consuming, but also a rewarding one as the market potential is huge. Besides the obvious current upside in use-cases such as screening, diagnosis and treatment for Covid-19, medical devices can also contribute to revenue from exports, and shore up the healthcare ecosystem in the long run.

The Covid-19 pandemic has just highlighted the importance of medical devices more than ever. A lot of startups, researchers and medical device manufacturers are currently focusing on improving the quality of care and also developing affordable devices, including ventilators, contactless wearable devices, UV sterilising chambers, testing kits, PPE among others.

At the same time, the Indian government has been supportive in this context and is easing the regulatory process for mass testing and production, where they are pushing startups and SMEs to develop medical devices that help India tackle the pandemic and other lifestyle and chronic diseases.

Under the new Medical Devices (Safety, Effectiveness and Innovation) Bill, the government has also proposed an improved regulatory framework which is said to improve the ease of doing business by providing a sound environment for innovation and approval of medical devices in the country.

According to GlobalData, the new proposed regulatory framework is said to focus on safety, efficiency and quality of medical devices, and will be operating under Central Drugs Standard Control Organization (CDSCO), which will be enhancing its expertise to regulate safety and efficacy of medical devices. Prior to this, 34 categories of medical devices were regulated, the health ministry now plans to cover all the medical devices sold under the new bill.

The ministry of health and family welfare (MoH&FW) in partnership with Niti Aayog has established a separate regulatory body for medical devices sold in the Indian markets. Also, the government plans to include the country’s top technical institutes such as the Indian Institute of Technology (IIT), Indian Institute of Science (IISc) and others, thereby utilising their world-class laboratories, to help set benchmarks and safety guidelines for providing certifications to medical devices.

Speaking to Inc42, CS Murali, chairman of entrepreneurship cell at SID (Society of Innovation and Development), IISc said that the faculty not only provide support to entrepreneurs in shaping their ideas, but also help them with testing, prototyping, certifications, capital and networking to scale their products in the market, faster.

Startups and SMEs are working towards leveraging new-age technology such as artificial intelligence, 3D printing and wearable devices where they are designing, testing and developing medical devices that not only solve the health problems, but also boosts the industry to a whole new level. Some of the startups include InnAccel, Dozee, EzeRx, JANITRI Innovations, Niramai, Tricog Health, Pandorum Technologies, AgVa and Biodesign among others.

Under this initiative, XHealth Innovation Lab will be incubating ten startups in each cohort twice a year. The company, in the press statement, said that the applications will be open on June 20 for the first cohort starting in October 2020.

The ‘Local For Vocal’ Mantra For Medical Devices

Last month, Prime Minister Narendra Modi highlighted in his speech about India’s ‘vocal for local’ initiative as a measure to promote the manufacturing of medical devices locally. Besides announcing the INR 20 Cr stimulus package during his speech, PM Modi also spoke about the medical devices market and unveiled India’s manufacturing capabilities.

Though the government’s intentions are good, some argued that the quick prototype development and deployment is really a risky move and it could even worsen the situation as people’s life is at stake in these critical times.

“On the bright side, Covid-19 has accelerated the growth of this sector, and this could be an opportunity for India to become a hub of global medical device manufacturing,” said Arun Agarwal, founder at JANITRI Innovations, a medical device company that develops products to solve the grassroot level problems related to maternal and child healthcare. Bengaluru-based JANITRI Innovations currently works with 113 hospitals and has monitored close to 13K patients.

India, on the other hand, comprises about 1.7% of the world market and the current market size of the medical devices industry in India is estimated to be $11 Bn, as it is significantly import dependent, and also, the present day demand does not offer scale in various product categories. Some of the raw materials that India imports from China include gloves, syringes, bandages, computed tomography and magnetic resonance imaging devices, etc. According to GlobalData, India accounted for more than 13% of the Asia-Pacific medical devices market in 2019 and is expected to grow at a CAGR of 7.5% by 2025. In FY17, diagnostic imaging, consumables and other medical devices recorded 86% of total export trade for Indian medical devices industry. 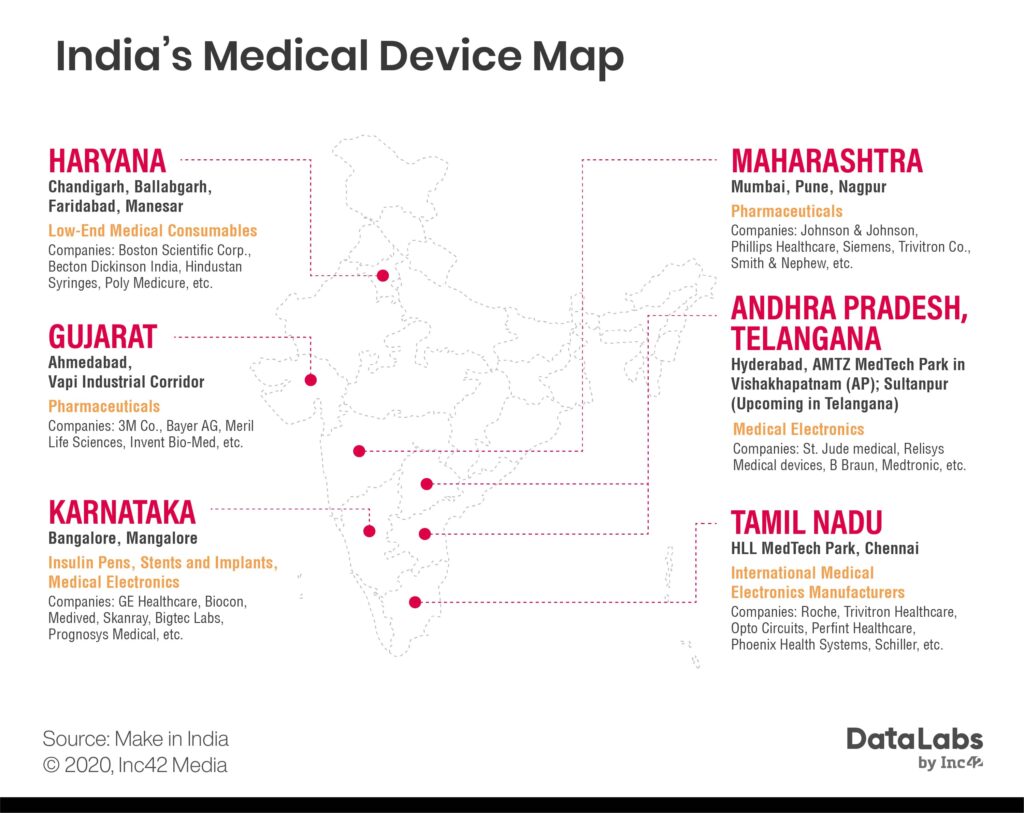 Today, the India’s medical device industry market is still in the nascent stage and most of the devices are targeted at patient level and many companies are facing closures since they can not compete with China and imports from other countries, including the US, Singapore and Germany and others.

Rajiv Nath, founder and forum coordinator at Association of Indian Medical Device Industry (AIMED), said that to make India self-reliant in medical devices, the government needs to come up with a comprehensive medical device law which can solve most of the issues with the sector.

AIMED had stated that India has an estimated 900-1K domestic medical manufactures, and only 15 companies have a turnover of above INR 200 Cr. In 2019, India imported equipment worth INR 38,837 Cr, nearly 66% (INR 25,624 Cr) worth of medical devices were in the electronics and equipment category, from multinational companies such as Philips, GE and Siemens among others.

How Startups Are Tapping The Opportunity

For startups, it is a whole different ball game altogether, Pritish Gupta, COO at Dozee.io said that unlike software companies, medical devices take longer time for testing and collaboration with hospital, medical institutions. “Since our product uses an AI-based application, the accuracy improves with time and collection of data,” he added.

“Once developed, getting the right validation of certification takes time and money,” said Gupta.

Gupta said that the certification process takes a significant amount of time, and once these things are done, the real challenge is customer acceptance and enabling the market. “It is a bit of a challenging industry, but once we have solved challenges, I believe that it is going to be fruitful and valuable for the healthcare industry,” he added.

Bengaluru-based Dozee.io claims to have developed India’s first contactless health device for stress management, better sleep, heart and respiratory health monitoring. Currently, the company has tied up with more than ten hospitals and healthcare institutes, including NIMHANS, Jayadeva Hospital and Ministry of Ayush among others, where more than 2500 devices have been used till date. The company claims that its medical device is 98.4% accurate as compared to the existing devices used in the hospitals.

Dozee is also backed by private and public entities like Bill & Melinda Gates Foundation, Qualcomm, BIRAC and department of biotechnology among others. It has filed three patents for its medical device

Is The Future Of Medical Devices in India Bright?

JANITRI’s Agarwal said that getting the right expertise during the development stage is very crucial for startups, especially those who have built medical devices in their past, and that actually helps entrepreneurs to a large extent. “Otherwise, as a fresher or young entrepreneur, you might just develop a prototype,” he added.

Further, he said that India has never developed a medical device as we have been importing it from outside, therefore it becomes very difficult to find the right kind of people in industry to support startups.

However, in the last five years, institutions such as BIRAC, under the department of biotechnology, have been providing a significant amount of support to startups in the medical device landscape, thereby fueling innovations and guidance to develop commercially affordable and quality products to the market, he added.

Many industry experts said that for medical devices to work in India, it has to go through proper channels of approvals, testing and regulation process, keeping in mind the affordability, accuracy, accessibility and quality. Once this is done, companies and startups can run their devices anywhere in the world.

As India has a huge population, the collection of data, testing of the product and scaling of the medical devices is highly plausible. However, the country needs to simultaneously accelerate its manufacturing capabilities to fuel the growth of the industry.

Also, a clear long term vision and roadmap for the medical device industry and predictability of policy would excite the industry. It’s crucial to back any private sector enthusiasm with policy that supports both the demand and supply side. However, with the new proposed medical bill and the government’s ‘vocal for local’, startups and SMEs are expected to get the adequate push to bring their innovations to market.