Lessons From FAST42: How India’s D2C Market And Brands Are Evolving In 2022

Lessons From FAST42: How India’s D2C Market And Brands Are Evolving In 2022

In 2021, the D2C segment saw unprecedented funding with more than $1.4 Bn across 160+ funding deals, shining an even brighter spotlight on this growing segment

Through our FAST42 list, we not only identified the 42 fastest-growing brands in India, but also got an even clearer picture of where the D2C segment is heading in 2022

If an average Indian person from any major city somehow arrived straight from 2018 to 2022, they might have a tough time recognising many of the habits and the brands that Indian consumers choose today. These days, the daily lives of Indian consumers in metros and large cities revolves around apps like Dunzo, Nykaa, Purplle, Blinkit, Swiggy, BigBasket, Zepto besides the larger marketplaces — Amazon India and Flipkart — that have existed for years. And simple ecommerce presence has been replaced by direct to consumer or D2C operations by legacy and new-age players in India.

The Indian behemoths that once populated older format retail and kirana stores have also given way to new D2C brands. We are talking about startups and brands such as Licious, boAt, Mamaearth, SUGAR Cosmetics, Melorra, The Whole Truth, Kapiva, Vahdam Teas, Blue Tokai and others that have quickly become the go-to options for the new generation of Indian online shoppers.

While we always knew that D2C brands and startups will have a role to play in the Indian economy, we only realised the sheer scale of India’s D2C landscape after we hosted The D2C Summit, which got a rousing reception to validate our belief that D2C is the future. This was backed by unprecedented funding for the D2C segment in 2021 — more than $1.4 Bn across 160+ funding deals.

Then, in October last year, Inc42, along with Trell, announced FAST42, an initiative to identify and recognise India’s fastest-growing D2C brands. After four months of extensive groundwork, research, vetting and talking to D2C startup founders and pitches, we launched our inaugural list in early March.

We discovered several insights and trends in the D2C segment through this process as 1000s of startups sent in their applications. We narrowed down the field to 300+ startups in the first round and then picked the final 42 based on criteria such as revenue growth, scale of operations, the performance of their native sales channels among other factors.

And along the way, we unearthed clues about where India’s D2C segment is heading, how it is evolving and the categories that are making the most noise. Besides this, the funding trends and movement within the burgeoning D2C segment have also become clearer. Here’s a snapshot of our primary insights. 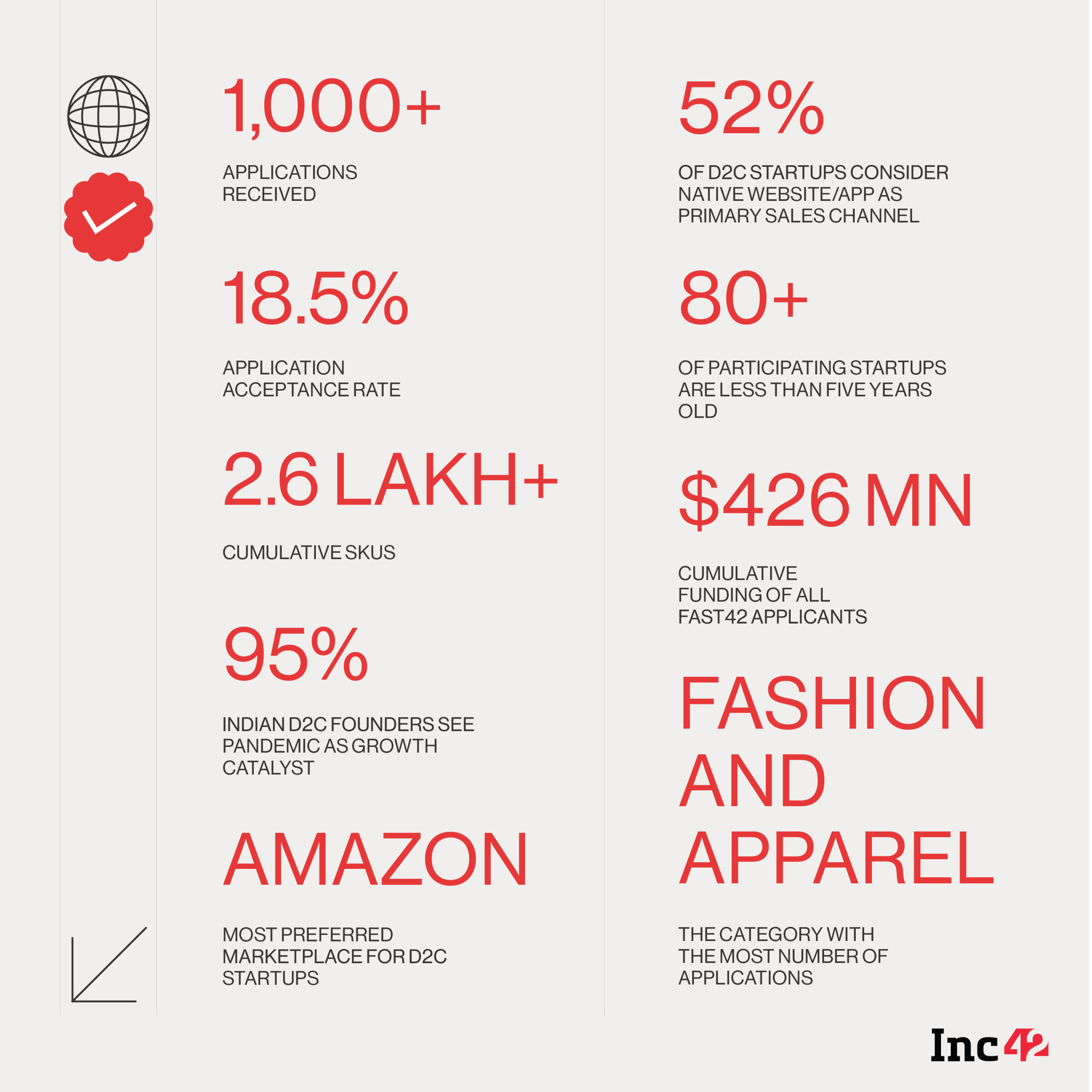 We have always been fascinated by the plethora of new-age beauty brands in the Indian market. It would seem there’s always room for newer labels, brands and products, with differentiation coming in through product development, pricing, design, packaging, community-building and other aspects. 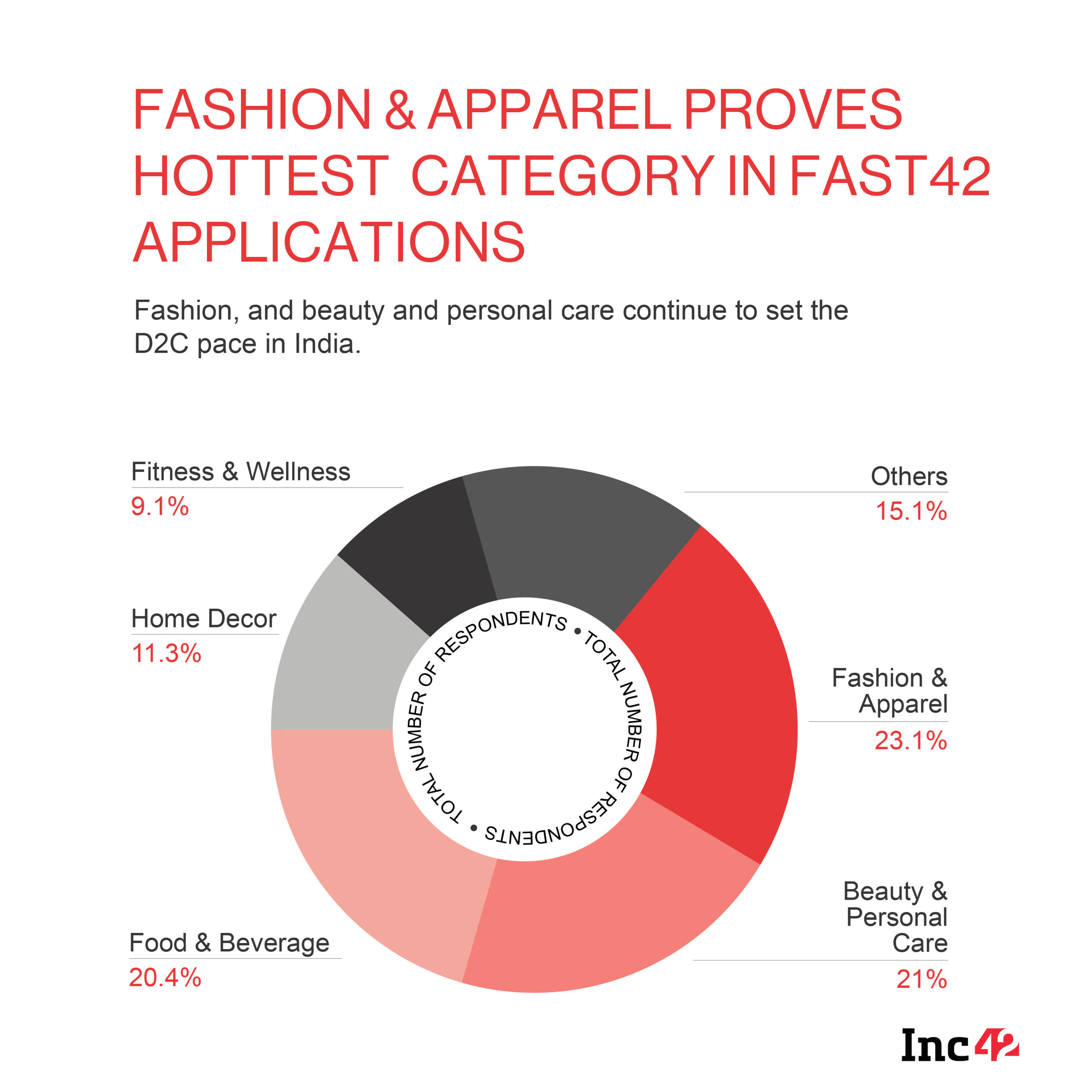 The same can be said about the fashion category too — the long-tail unorganised market indicates the room for new brands to enter the fray.

Although traditional players still dominate the beauty and fashion categories, new-age D2C companies are giving them a run for their money by leveraging social media and influencer marketing, banking on data to bring in repeat customers, using automation in product development, marketing, sales and logistics to offer enhanced customer service.

The proof can be seen in the revenue growth for larger D2C beauty brands in comparison to multinational players. For instance, while Revlon and Lotus took around 20 years to reach the INR 100 Cr revenue mark, Mamaearth and SUGAR took just four years to reach that milestone, as per our analysis.

With so many brands competing in the market, and new ones coming in every other month, startups have been looking to set themselves apart in the way they sell. From AR & VR to live or social commerce, D2C brands have looked to stand out.

These brands are not only relying on their native platforms to sell, but also on newer marketplaces such as CRED — besides Amazon, Tata Cliq, Ajio and Myntra — social commerce apps such as Trell, Woovly and others, as well as ‘traditional’ social media such as Facebook, YouTube and Instagram.

It’s no secret that metros and cities are the primary target markets for D2C brands given that the audiences in these urban areas are considered more aspirational, technologically-proficient and experimentative. Besides this, these consumers are also more comfortable with buying daily use items and essentials online, whereas the consumers in Tier 2 and 3 markets have only recently added this behaviour post the pandemic.

Unsurprisingly then, the majority of India’s top D2C brands across categories hail from the top three cities i.e. Delhi NCR, Bengaluru and Mumbai. As we noted nearly two thirds of all brands come from these top startup hubs.

According to a Redseer study, Tier 2 locations and beyond may account for 88% of the online shoppers between 2020 and 2030, so brands are slowly shifting their attention to these new shoppers. The adoption of social commerce is also an indicator since newer platforms such as Trell, Moj, Josh and others are drawing in millions of users from Tier 2/3 cities and towns. 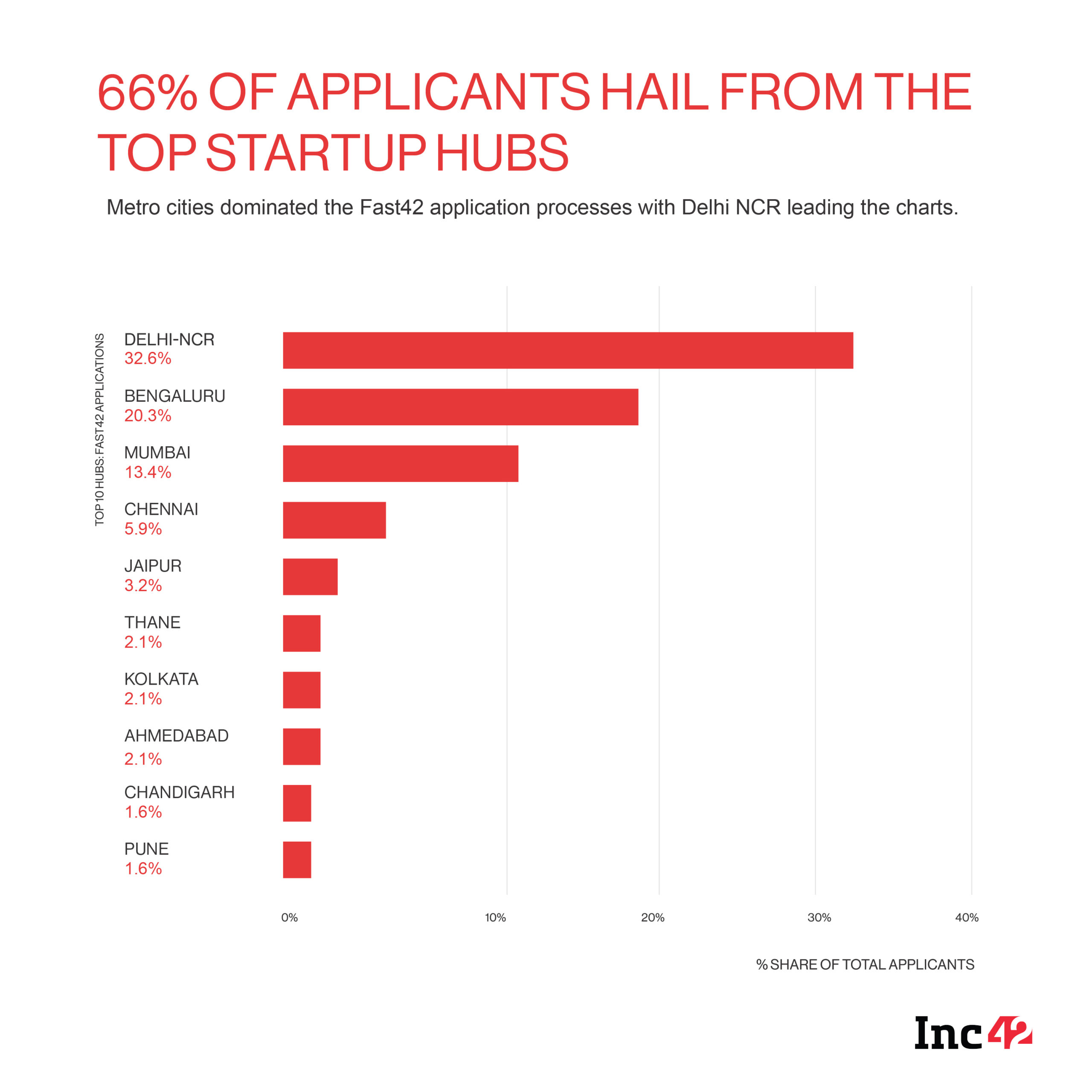 Shoppers outside the metros are expected to add cumulative incremental online retail transactions worth $7 Bn+ and more than $150 Bn cumulative incremental online retail GMV during this period. However, tapping into non-metro markets means brands need to revisit and rework their strategies for contexts such as design maturity, brand messaging, product positioning, localisation based on diversity in languages and ethnicity.

While consumers in metros are more open to experimentation, those in Tier 2 and Tier 3 cities are genuinely exploring value from products, especially from a premium product. As Tanvi Johri, founder and CEO of Gurugram-based Carmesi, a women’s hygiene brand, told Inc42 in December last year, these consumers want to understand the brand, its values and USP, the narrative behind the products, the price rationale and more.

Delhi NCR-based boAt’s CEO Vivek Gambhir backed this up by saying that as users in hinterland India become more comfortable with shopping online, the brand has noticed a visible uptick in sales. He attributed 40% of its growth today to Tier-2 and Tier-3 cities, a massive increase as compared to the share of the cities before the pandemic.

Many players believe that the growth for D2C startups across categories in metros will eventually trickle down to smaller towns and cities, as was seen for ecommerce. With this maturity, more and more brands will emerge from Tier 2/3/4 towns and cities. It’s only a matter of looking at the number of acquisitions by ecommerce roll-ups, D2C houses of brands and other such platform plays to see the plethora of smaller brands that are being brought to the limelight.

Of course, no one can specify a timeline for when D2C will become mainstream beyond metros too. It’s an expectation that hinges around just how quickly these brands are able to tap their primary markets in metros.

Will Marketplaces Continue To Rule Over Native D2C?

Despite 1000s of new-age brands and startups, the term D2C or direct-to-consumer is a misnomer in the Indian context. That’s because the reliance on marketplaces, retail channels and other platforms to sell is often greater than sales from native platforms.

While in the US, D2C brands like Warby Parker, Everlane, Casper, Purple, Dollar Shaving Club and The Honest Company are pureplay native online brands, this is not seen in India to the same degree. Most brands prefer to leverage marketplaces to supplement their native sales and bring in customers to the fold. Some exceptions would be brands like Country Delight where 98% business comes from the native platform. Similarly, Bewakoof only has a native ecommerce platform with presence anywhere else. Of course, the long-term vision is still about autonomy in operations, full-stack production, and vertical integration, but for the time being, most brands have adopted an omnichannel approach — presence in retail outlets, ecommerce marketplaces, grocery delivery apps and local supermarkets to fulfil hyperlocal delivery demand.

From the consumer point of view, the comfort and confidence level is high for established ecommerce marketplaces, which is also a major factor.

We asked founders in the FAST42 application process how much of their revenue comes from third party marketplaces vs their own website/app. The responses were split down the middle, so marketplaces continue to remain a viable channel for these brands. And among marketplaces, Amazon India was comfortably the port of calling for many of these D2C brands.

The reliance on marketplaces is not surprising, because pureplay D2C as a model is hard to achieve in the Indian context. Not only does it require significantly more capital to promote and market a single sales channel, but it severely aggravates the costs associated with other aspects such as deliveries, customer returns, and more. Unless brands focus on small and niche audiences and play the long game, the native channel will not be able to bring in as many eyeballs on to their products as the right marketplace or retail channels.

Having end-to-end control or vertical integration of the entire value chain is like gold dust in the Indian market. Besides eliminating middlemen or intermediaries, it also means controlling logistics and online reach. In a market like India, that is a herculean task.

We expect the dependency on social media, digital commerce and other niche marketplaces to increase as more and more consumers outside the metros become accustomed to D2C brands.

The Covid Factor In D2C

If ecommerce penetration was the trigger point for D2C brands, the inflexion point has come amid the pandemic. As per Google’s Year in Search Report for 2021, online-first shopping experiences and D2C brands have seen massive gains in interest.

Search interest in D2C brands rose by 533% in the past year, D2C brand comparison searches grew by 41%, while searches for native platforms grew by a whopping 80%. This does indicate the growing maturity of the consumer base.

But even startups are increasingly admitting that the pandemic has accelerated their brand’s journey. As per our previous analysis, startups with native D2C points-of-sale recorded an 88% rise in consumer demand in 2020 compared to the previous year. 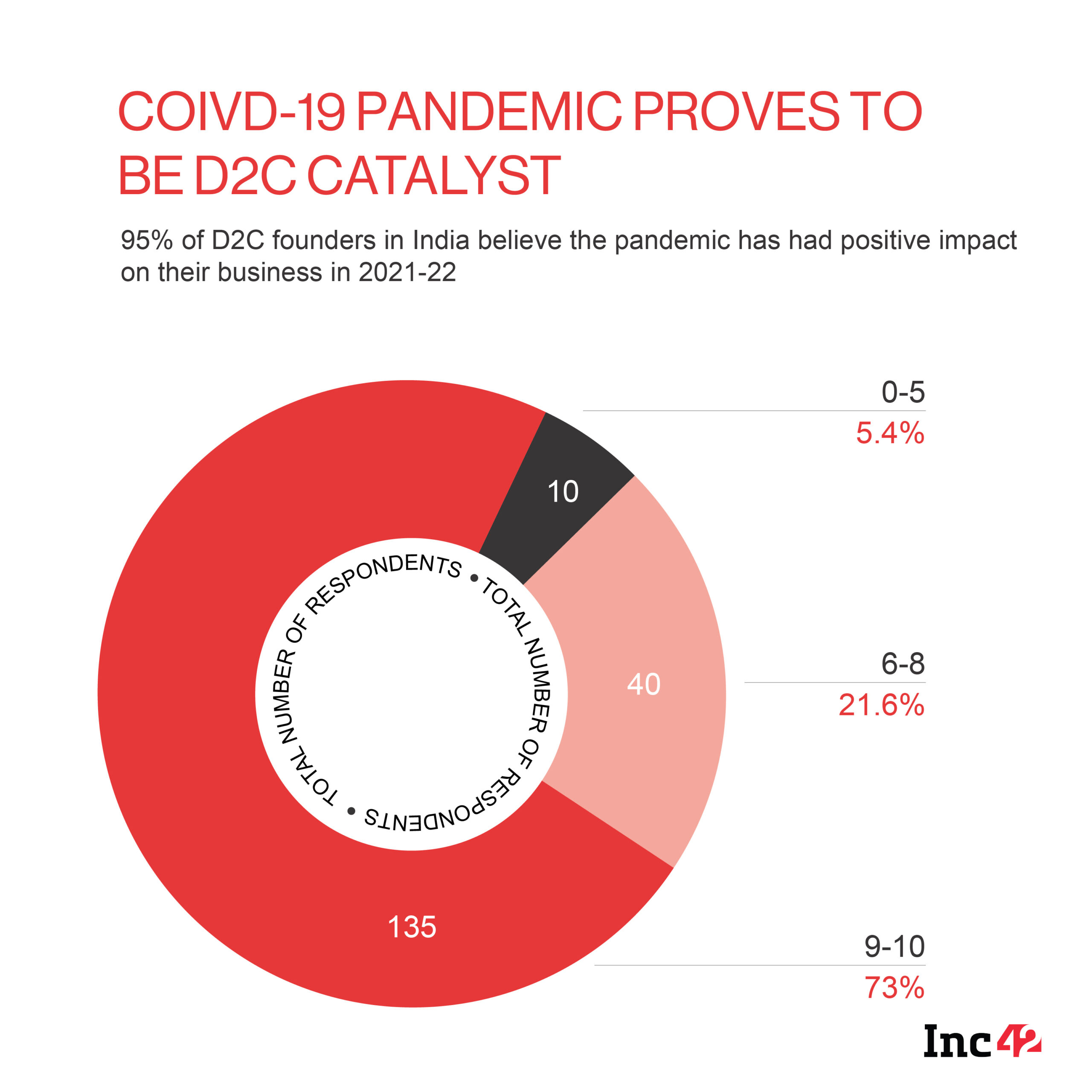 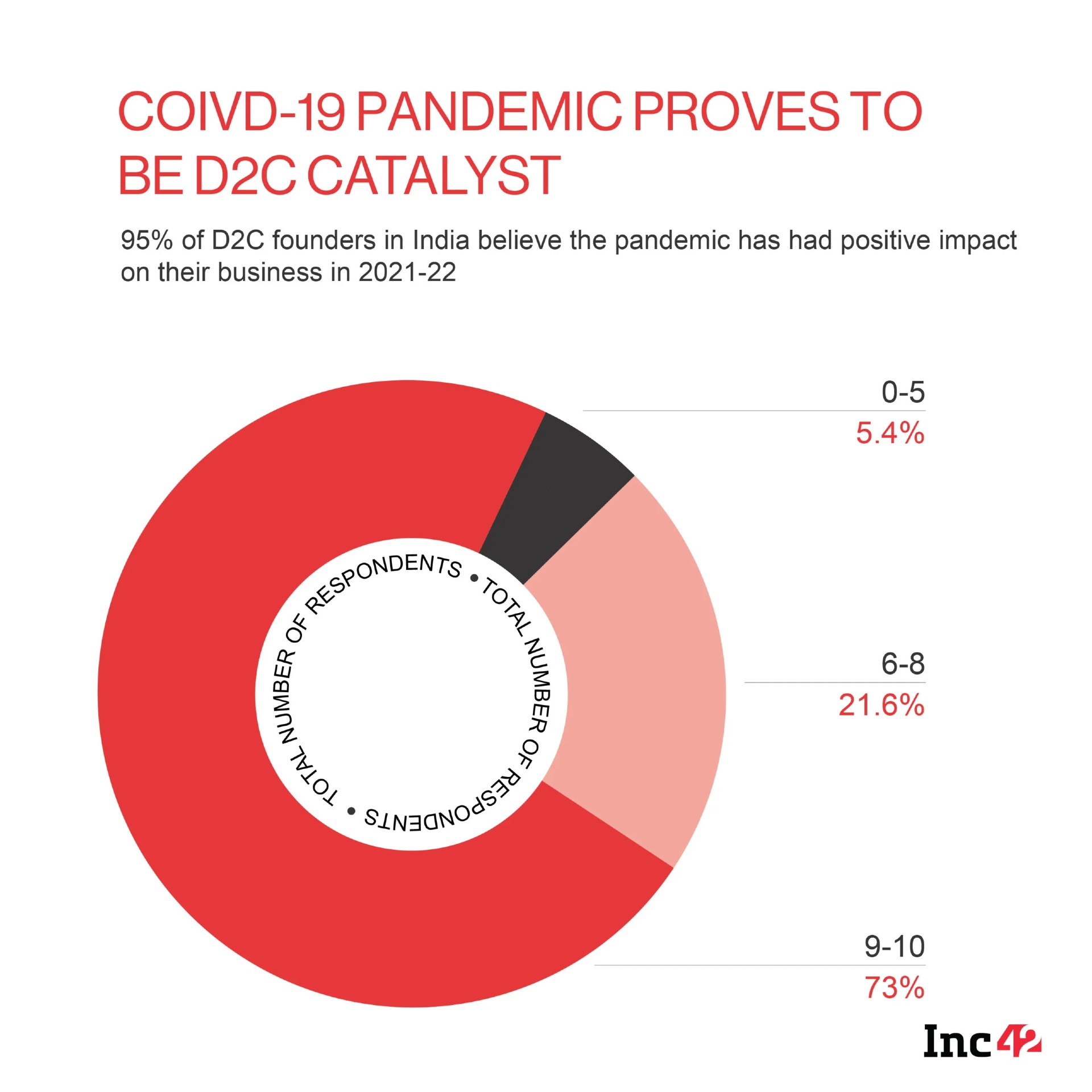 The wave of D2C has prompted FMCG giants to push to acquire online-first brands. The likes of Emami and Marico have invested in The Man Company and Beardo, both male grooming startups disrupting the status quo. Aditya Birla Fashion is eyeing investments and acquisitions of brands to build its house of brands, while Tata, Reliance and others have also invested in plenty of D2C brands. The likes of Vu Televisions have also split their focus between retail and online selling.

Retail product makers are finally realising that ecommerce is not just good-to-have, but simply indispensable for their brands in 2022. The D2C storm has only just started brewing and it’s only about to get fiercer.