Tiger Global led the way with participation in 12 mega rounds, followed by Temasek, SoftBank, Zomato, Falcon Edge and others

Excluding the mega round outliers, the total funding poured into Indian startups stood at around $13.5 Bn for 2021

With 42 startups entering the unicorn club in 2021, it is no surprise that the Indian market saw plenty of mega deals, but the dominance of the mega deals on the overall funding is still noteworthy. The 108 individual mega funding rounds over $100 Mn is another yearly record for the Indian startup ecosystem, which comes up to just over 6.5% of all deals this year. Despite this, mega rounds accounted for 67% of the funding amount in 2021.

But this overall low share of high value mega rounds belies the fact that more than $28.2 Bn was raised through mega deals, with an average mega ticket size of $263 Mn. The median funding amount for such mega rounds was $175 Mn, while Flipkart’s $3.6 Bn round led by Walmart and Singapore’s GIC was the largest deal in 2021. 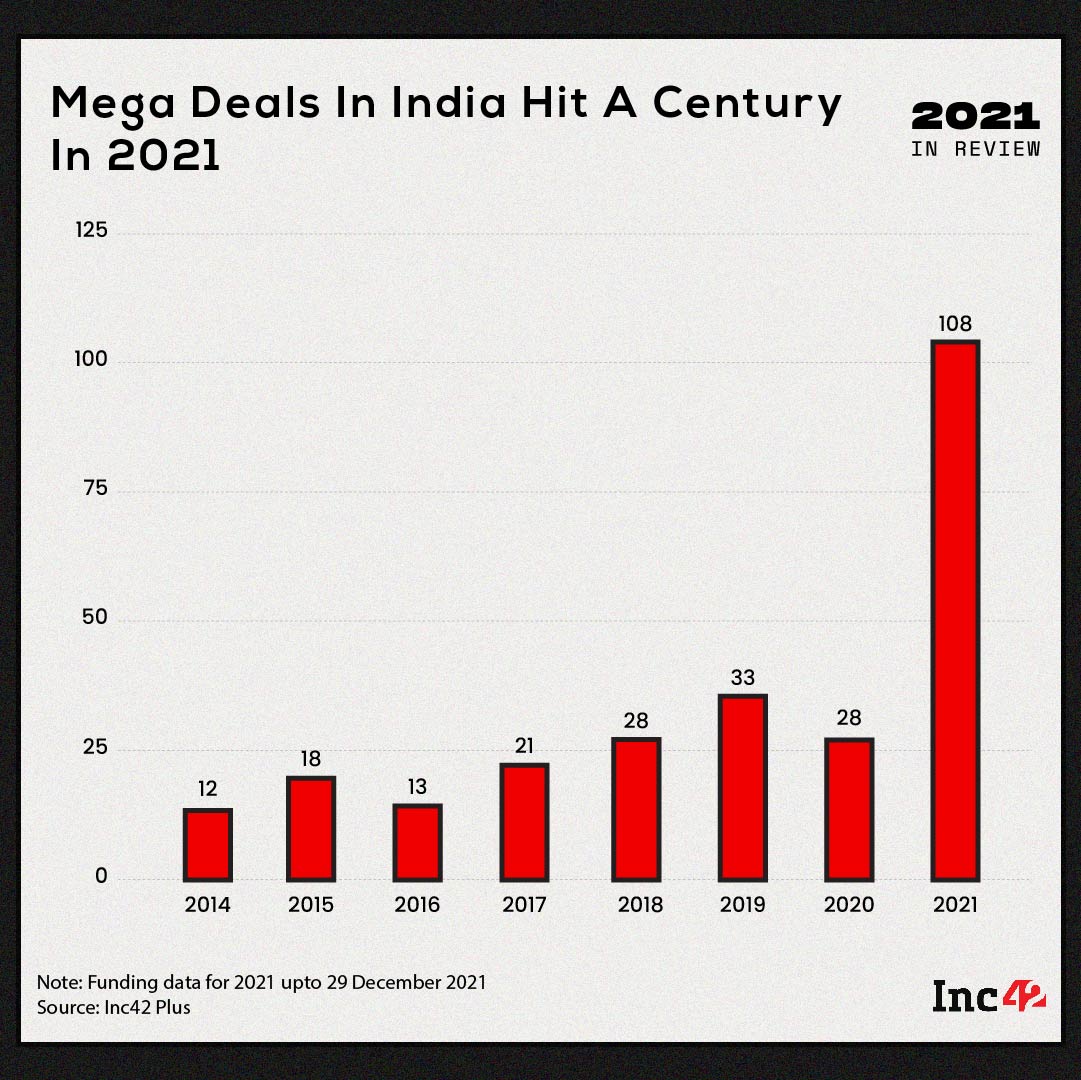 Excluding the mega round outliers, the total funding poured into Indian startups stood at around $13.5 Bn for 2021, which is just slightly higher than the $11.5 Bn raised in 2020. So in essence, the mega deals have had an oversized impact on the funding record of 2021. Here’s a look at the finer points from the data before we jump into what is fuelling the trend for mega rounds.

A total of 69 unique investors participated in these mega rounds. Tiger Global led the way with participation in 12 mega rounds, followed by Temasek (7), SoftBank (5) and Falcon Edge Capital, Growth Capital Ventures (GCV) and Zomato featured on the list with three mega deals each.

Zomato made its debut on this list in 2021 with its investments in Shiprocket, Curefit and Grofers (now Blinkit). The company, which went public in 2021, said it will invest in startups that can fit around its core food delivery business. Similarly, other public companies are also expected to continue backing startups in a big way either through investments or acquisitions.

Eighty one (81) unique startups feature among the list of startups that bagged mega deals in 2021, with Zetwerk, OfBusiness, Pine Labs, Delhivery and Ola featuring thrice over the period of the year.

Among sectors that attracted the most number of mega deals, ecommerce led the way with 25 deals, closely followed by fintech (22), while enterprise tech was a distant third with just 10 mega deals.

Among ecommerce businesses, the funding has been primarily used for customer and seller acquisition as well as expansion into newer categories such as social commerce, live commerce, creator economy and D2C roll-ups.

The investor appetite for large deals increased significantly over the past year. Take for instance the return of Tiger Global to the Indian startup ecosystem, which invested more than $2 Bn in India, after a couple of quiet years. The VC firm’s renewed focus on India can also be linked to the chilling effect around investments in China, particularly since the country’s regulators have targeted large tech companies for the past couple of years.

Besides that, India itself became a more attractive market after the growth seen by startups in 2020 despite the pandemic, particularly after in the second half of the year. Even though India was hit by a more severe second wave in April and May 2021, investors continued to back startups in a big way because of the impact and value created by them in the months preceding the second wave.

We expect growth-stage deal sizes to keep increasing in 2022 as startups at this stage look to expand their market and target overseas business. In addition, growth-stage startups will use a significant portion of the funds raised for acquisitions, as indicated in the record number of 206 mergers and acquisitions (M&As) in 2021.

With the number of new startups in the market also growing by 15%, the competition is expected to be steep in ecommerce, healthtech, edtech, fintech and enterprise tech sub-sectors. The heavyweight startups in these sectors will be the target of mega rounds in 2022.

However, there might be a correction in late-stage funding, which is likely to slow down due to a number of IPOs by mature tech companies in 2022. As more and more companies go public, VC funding focus might shift to the early and growth stages, signs of which we already saw in the year gone by.