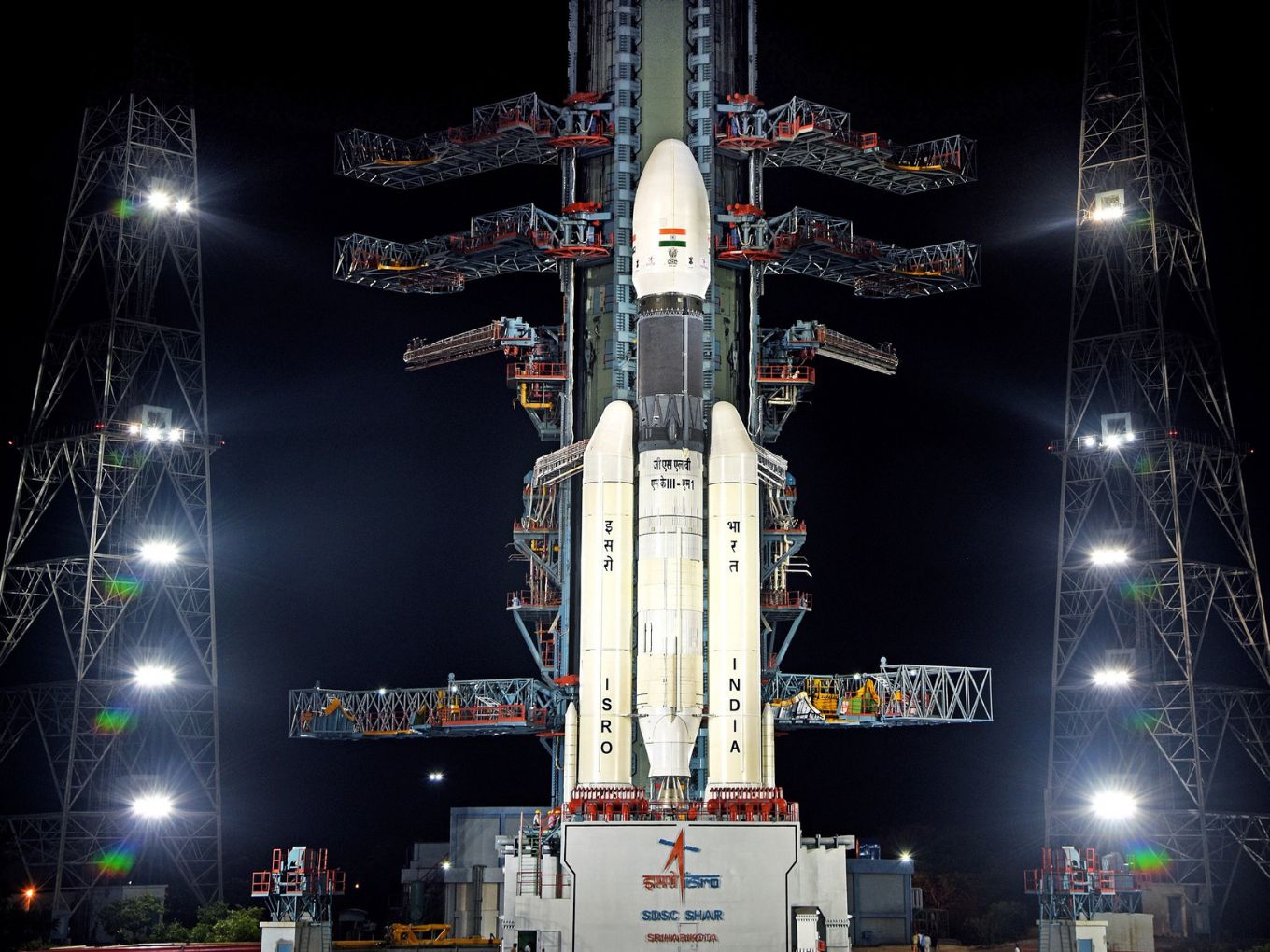 The mission was launched from Sriharikota by ISRO on July 22

At present, the space vehicle has successfully completed its first de-orbiting manoeuvre ahead of the landing

With President Ram Nath Kovind lauding the work done by Indian Space Research Organisation (ISRO) in a recent address, Prime Minister Narendra Modi tweeting about the indigenous development of spacecraft and over 7.5K Indians gathering to witness the live launch on July 22 — Chandrayaan 2 has officially become the most talked about topic in the past month. And it all came to a crescendo in the early hours of September 7.

Chandrayaan 2 is India’s second mission to the moon to study the extent of water molecules on the moon’s surface, evidence of which was discovered by Chandrayaan 1. The moon mission includes a launcher, orbiter, Vikram lander, and the AI-powered Pragyan Rover.

Unfortunately, as it got close to the historic landing, the Vikram lander lost contact with the ground station and the mission culminated in a failed attempt. ISRO is yet to issue an update and the official website still only shows the last update from September 4.

India’s space agency lost contact with the Chandrayaan’s Vikram Lander around 2.1 km over the lunar surface, in what was a big setback to India and ISRO’s maiden attempt to land a spacecraft on the lunar surface. The lander began its 15-minute autonomous descent and overcame a rough breaking phase to go down from a height of 30 Kms to around 2.1 Kms, but it had veered slightly off the projected trajectory. Soon after, the lander lost contact with the ground station. The lunar orbiter, also part of Chandrayaan 2, which has several sensors and instruments onboard is safe and hovers around 100 Kms over the moon. It will continue to send data and readings.

As the trajectory graphs deviated on the screens at the control centre in Bengaluru, ISRO chairman K Sivan called it “15 minutes of terror” as the inability of the ground station to take control. Sivan was inconsolable as he told Prime Minister Narendra Modi, who had arrived to witness the landing, that communication was lost with the spacecraft.

Nevertheless, the global space community and enthusiasts lauded ISRO’s achievement; many social media comments centred around how quickly India has caught up to other leading space-faring nations and there were reminders about how early missions in those countries also ended unsuccessfully.

India can now look forward to the Aditya mission to study the corona of the sun, which is set to be launched in 2019-2020.

The manoeuvre was slotted to begin at 3:42 AM this morning and went as planned, with the onboard propulsion system coming in to play. The total duration of the manoeuvre was nine seconds, but it is a big step forward for the lander, which is expected to make a soft landing on September 7.

The Vikram Lander’s orbit is 35 km x 101 km at the moment, and while the Chandrayaan 2 Orbiter continues to orbit the Moon further away. The second de-orbiting manoeuvre is crucial as it brings Vikram to the required orbit to begin its descent journey towards the surface of the moon.

The orbit of Vikram Lander is 104 km x 128 km. Chandrayaan 2 orbiter continues to orbit the Moon in the existing orbit and both the Orbiter and Lander are healthy.

The Vikram Lander successfully separated from Chandrayaan 2 orbiter on September 2, after spending more than ten days in the lunar orbit. Chandrayaan 2 has also sent pictures of the moon surface in the time spent orbiting the moon.

The soft launch of the Vikram Lander on the moon is expected to happen on September 7. If successful, India will become the fourth country after the US, Russia and China, to successfully make a soft landing on the moon surface.

In the event of a successful moon landing, Pragyan Rover would have been separated from the launcher. Pragyan is a six-wheeled robotic vehicle, which can travel up to 500 m and uses solar energy to charge itself. The rover can only communicate with the Vikram Lander. At the moment, it’s not clear whether the rover has been deployed since ISRO has not updated its website.

Travelling To The Moon In Just $142 Mn

After its $75 Mn Mars mission dubbed Mangalyaan, Chandrayaan 2 is another one of ISRO’s low budget missions with a cost of only $142 Mn. To put this into perspective, NASA’s Apollo mission cost around $185 Mn, taking the manned vehicle to moon in just four days.

India has been able to cut costs by adopting the orbital route to the moon instead of the faster straight trajectory. The current trajectory of the Chandrayaan 2 takes advantage of Earth’s gravity, to help catapult the spacecraft towards the Moon.

The reason for this choice was also driven by the fact that the rocket required to send the Chandrayaan 2 on a straight path to the moon will need a huge investment and much more power than the ISRO’s GSLV-MkIII which was used for the Chandrayaan 2 launch.

However, this method did increase the mission time for the ISRO’s mission to more than a month, in comparison to the four day launching time of the US’s Apollo mission.

The Team Behind Chandrayaan 2

ISRO’s Ritu Karidhal and Muthayya Vanitha are leading the Chandrayaan 2’s main components ranging from project oversight to the final landing phase. Karidhal, who was also the deputy operations manager for the ISRO’s Mars Mission, is now working as the mission director for Chandrayaan 2. She holds a master’s degree in Aerospace Engineering from Indian Institute of Science (IISc). While, an electronics system engineer Muthayya is the project director for Chandrayaan 2 mission. Both Muthayya and Karidhal have been a part of ISRO for about 20 years now and have contributed to various rocket launches and satellites development projects.

Why The Moon’s South Pole?

India is not the only country interested in unravelling the mysteries of the moon’s south pole. The NASA, companies such as SpaceX and Blue Origin, and even individuals have been planning to foray to the southern pole of the moon. The Chinese Lunar Exploration Program is also focussed around the southern pole and was launched in 2007.

Talking about the importance of this particular region, ISRO said this region’s craters have been untouched by sunlight for billions of years — offering an undisturbed record of the solar system’s origins.

The south pole’s permanently shadowed craters are also of interest as they are estimated to hold nearly 100 Mn tonnes of water along with traces of hydrogen, ammonia, methane, sodium, mercury and silver — making it an untapped source of essential resources.

Its elemental and positional advantages make it a suitable pit stop for future space exploration, ISRO added and this was also reiterated by the Prime Minister in an earlier tweet, “#Chandrayaan2 is unique because it will explore and perform studies on the south pole region of lunar terrain which is not explored and sampled by any past mission.”

“Efforts such as #Chandrayaan2 will further encourage our bright youngsters towards science, top quality research and innovation,” he added at the time.

What’s Next For Chandrayaan 2 And ISRO

Even as the Chandrayaan 2 mission winds down, ISRO will begin turning its focus on the 2019-2020 Aditya L1 mission, its first planned probe to study the Sun’s corona and atmosphere. It is expected to launch during 2019–2020 on a PSLV rocket.

Following Aditya, it would be the turn of the Gaganyaan mission, planned for December 2021 or January 2022. Announced by Modi in 2018, this is India’s attempt to send astronauts to space on a spacecraft called the ‘Gaganyaan’. The mission will make India only the fourth nation in the world to accomplish the feat if successful. At nearly $1.4 Bn, the Gaganyaan mission is expected to be India’s biggest and most expensive space mission.