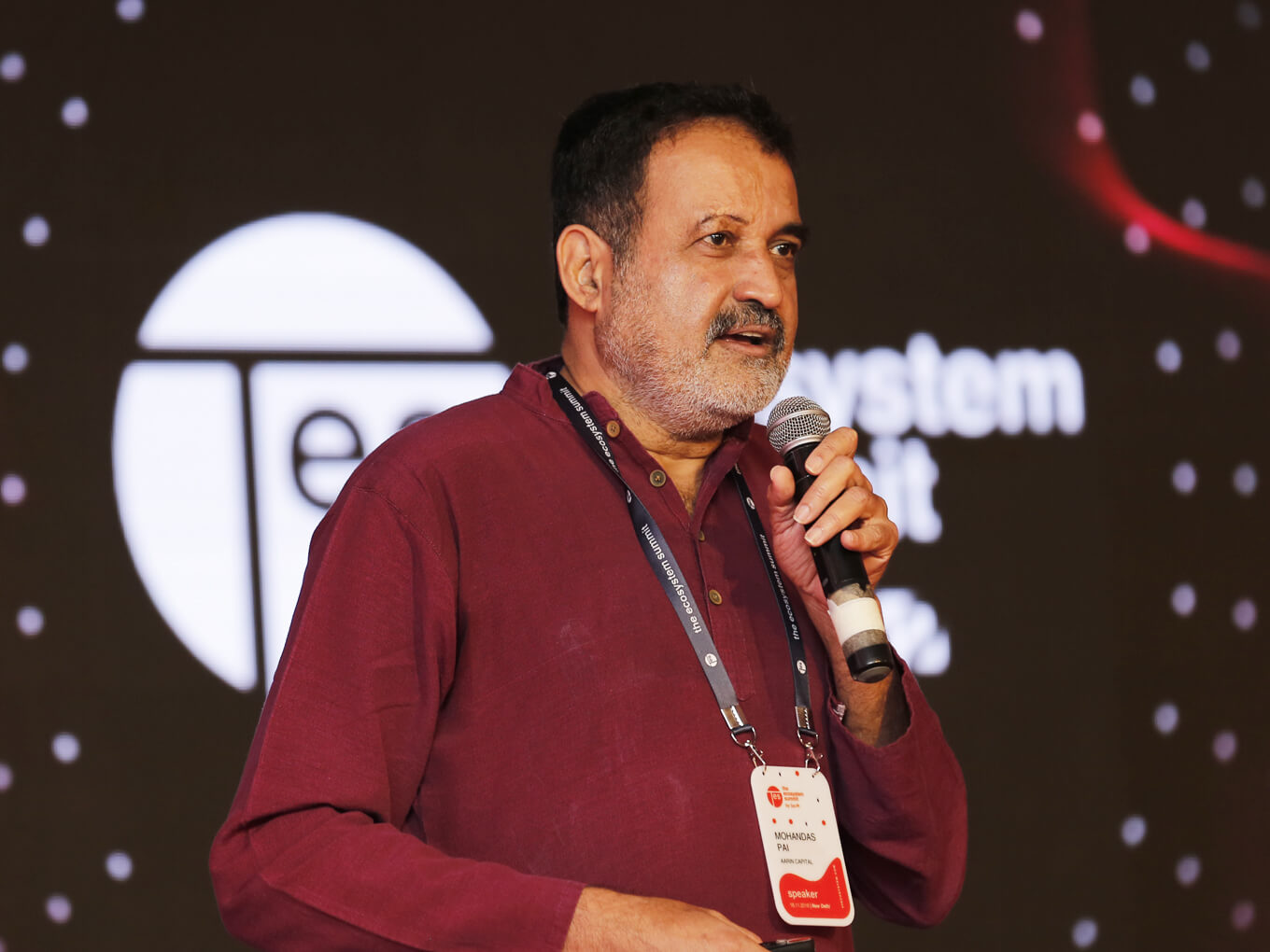 By 2025, we will have 100 unicorns, Aarin Capital partner Mohandas Pai said

Unlike China, Japan, US, and many other countries, India is not ageing, said Pai

India is ready to take on leading nations as it looks to secure a place among the top three economies of the world by 2030, said angel investor TV Mohandas Pai. Pai, currently a partner at VC firm Aarin Capital, is a former Infosys CFO and a law graduate and fellow.

He was speaking at the launch of Inc42’s The State of The Indian Startup Ecosystem 2018 report at our flagship event, The Ecosystem Summit, held on November 16 in New Delhi.

Pai has high hopes from Indian technology entrepreneurs and expects them to create a $10 Tn economy by 2030. He also expects India to have 100 unicorns by 2025.

Pai provided many facts and figures on certain socio-economic factors and demographics to support his estimates.

He pointed out that India has the second-largest population in the world, which is increasing at a rate of 1.11% — much faster than that of China, at 0.39%. While its large population makes India the “ultimate” investment-destination and market in the world, it could also be cause for concern, said Pai. However, he added that things are looking up as India’s population growth rate seems to be stabilising.

“The fertility rate of the whole of south India is less than 1.8%. Except for a couple of states like Bihar and UP, the fertility rate (in India) is stabilising and, hence, in coming years, the population may not be that big an issue as it appears today,” said Pai.

What India has going for it is the fact that it is the fastest-growing economy in the world today. Since 1991, for the last 27 years, India has had a GDP growth rate of 8.7%, which is only second to China, which grew at 9.5% during the period.

Currently, India’s GDP growth rate is 8.2%, the highest in three years. With this, it has surpassed China as the fastest-growing economy this year. Recently, India also became the sixth-largest economy in the world.

“We are the fastest-growing country in the world. Not comparable with any other country but China. Singapore is home to 5 Mn people, half of Bengaluru’s population. Similar is the case with Finland and other countries,” said Pai.

He added that the increasing participation of women in workforce augurs well for the country. Pai said the only country that has outpaced India on this front in the last 25 years was China. The disparity in education rates among women in India and in China is one of the reasons that India is lagging behind its neighbour as far as women’s participation in the workforce is concerned.

“When Mao Zedong came to power in China, he said, ‘Women hold up half of the heaven,’” said Pai.

Luckily for India, things are changing fast, said Pai, pointing out that about 60% of the enrollments in medical courses in the country are women while in engineering, the figure is 40%.

There’s more good news — India’s inflation is normalising. From 12.5% in 2009, the inflation rate has come down to 4.7% in 2018, even as GDP growth rate is 8.2%. This is reflective of the quality of growth India is seeing. “We have 28% in savings growth. This year, the total investment in India is $760 Bn. It’s not a small number — 30% of the GDP. This largely goes unnoticed, because of the large and diverse geography,” explained Pai. 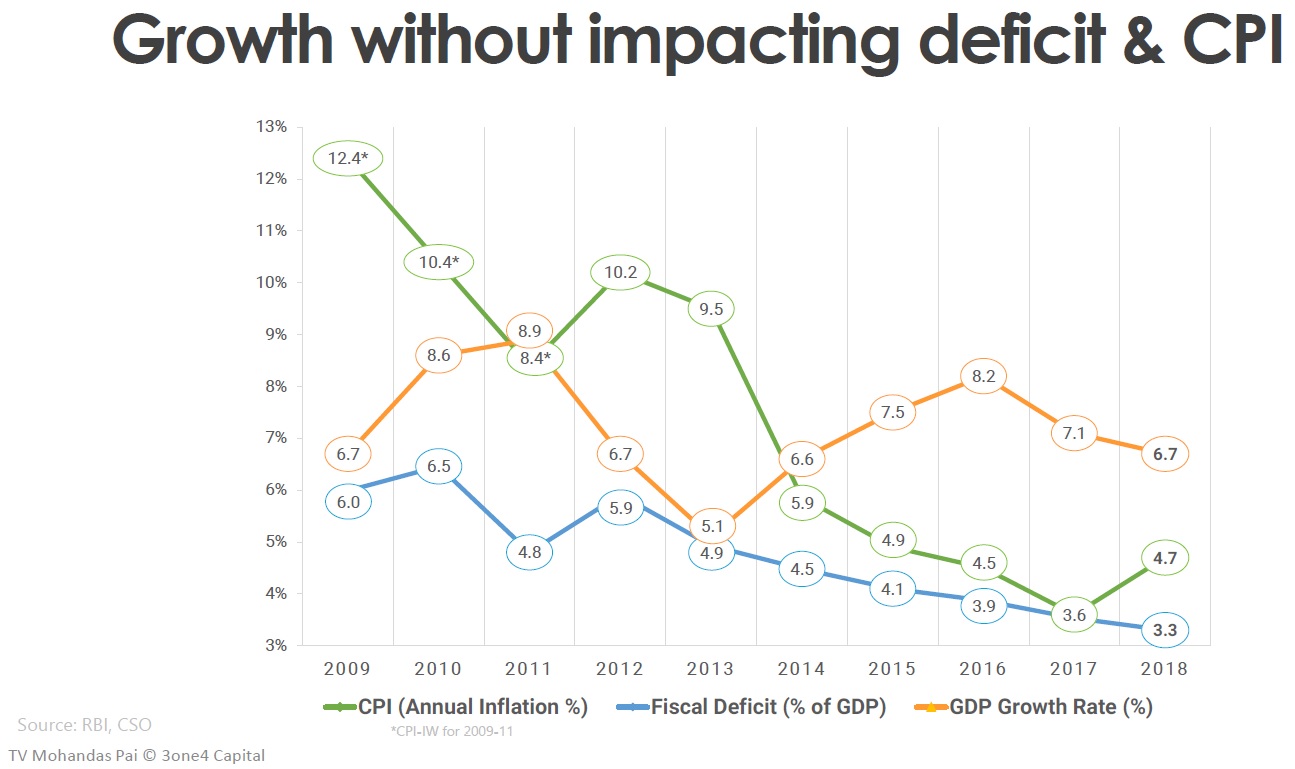 “Unlike China, we are not ageing.  Compared to the US (37 years), Japan (48 years) and China (37 years), Indians’ average age is much lower — 29 years. This also supports the claim that the Indian entrepreneurs are the agents of change,” said Pai.

Talking about the findings of Inc42’s flagship report — The State Of The Indian Startup Ecosystem 2018 — Pai asserted that the ecosystem metrics are reflective of the changes India is seeing — there are 39K startups in India, 2,000 investors, apart from an expanding coworking space.

Inc42’s 400-page report — The State Of The Indian Startup Ecosystem 2018 — takes a data-driven and comprehensive approach to analysing the state of the Indian startup ecosystem. The report presents a host of facts and figures relating to startups, policies, investments, sectors, technologies, and other core pillars of the ecosystem. “For the first time, we have a comprehensive report on the Indian startup ecosystem,” said Pai.

By 2025, we will also have 100 unicorns, forecasted Pai. That’s a lot of hope for the Indian startup ecosystem.